Jones: ‘You get that sick feeling when it ends’

Jones: ‘You get that sick feeling when it ends’

REGINA — It wasn’t a flashy win for the Winnipeg Blue Bombers, but a strong outing from the West Division’s Most Outstanding Canadian nominee in Andrew Harris was enough to grind out a win to move onto the Western Final in Calgary next Sunday.

The Bombers victory marks their first playoff win since 2011. That same year, Winnipeg went on to play in the Grey Cup in Vancouver, losing to the BC Lions 34-23. The Most Outstanding Canadian from that year’s Grey Cup was none other than then-Lion Andrew Harris.

Tackling, or lack thereof, was the point of emphasis as to where the Roughriders went wrong in Chris Jones’ mind following the 23-18 loss at Mosaic Stadium Sunday night.

Saskatchewan’s usual dominant defence lacked their flash they possessed throughout the season, especially from a unit which practically matched their offence’s scoring output.

Harris went off to rush for 153 yards and a touchdown on Sunday with the 19 carries he was given. The Bombers’ running back also contributed as per usual in the passing game, recording two catches for ten yards.

Meanwhile for the Roughriders, although kicker Brett Lauther went the evening being perfect on the four field goal attempts he had, Jones couldn’t help but think that the outcome may have been tilted in their favour if drives were extended on offence.

“We had our opportunities,” he said. “We were able to kick some field goals, but if we were maybe able to get one of those in for a touchdown, then maybe it would have been a little bit different. It’s a team effort, it has been all year long, and for us, it always will be.”

With the loss brings an unfortunate end to the season for Saskatchewan after posting the league’s second-best regular season record of 12-6.

“They came through a lot of adversity, a lot of people doubting,” as Jones says. “They never gave up on themselves. We were fortunate to have a bunch of really good guys in that locker room. We put ourself in position to attempt to play for a championship. Fell a little bit short. You get that sick feeling when it ends.”

When asked with regards to what he said to his team inside the locker room following the loss, Jones was quick to reply, stating, “I love ’em.”

“I love ’em,” he continued on. “I want to wring your neck one minute, but then you want to put your arm around ’em the next. We’ve got 12 rookies out there tonight. We had seven more second-year players. We had a lot of young guys, and like I say, we’re certainly not perfect and we do a lot of things wrong, but they play hard, they show up to work every day. It makes it really easy spending 18-19 hours a day down here because you know you’re doing it for the right reason, you’ve got a good group standing behind you.” 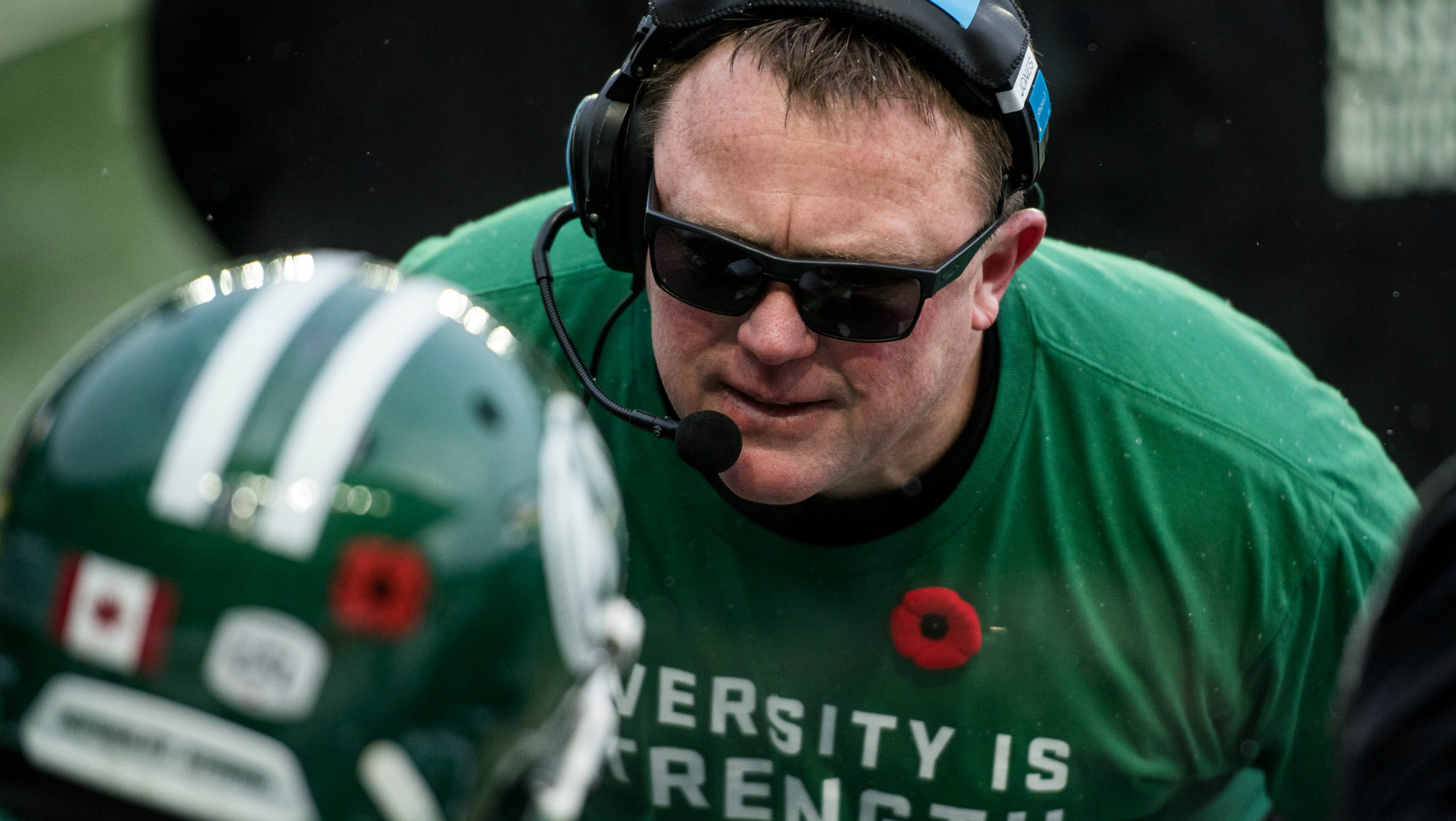 It brings a tough end to the Roughriders season, one in which they overcame adversity year-long before losing 23-18 to Winnipeg on Sunday. (Matt Smith, CFL.ca)

Jones says preparation for next season has been well underway, even prior to the playoffs, as he and the rest of the Roughriders staff work to field a championship-winning team for the Saskatchewan hopeful. In the meantime, however, they’ll have to sit and watch the Blue Bombers head on to face the Calgary Stampeders, an opponent that Jones is quite confident that the Bombers will be able to handle.

You can’t take anything away from what they’ve done in Winnipeg,” Jones said. “I think Winnipeg is a great football team, there’s no doubt. They’re coached well in all three phases. They’ve got good players. I think it’s going to be a really good ball game next week over in Calgary.”