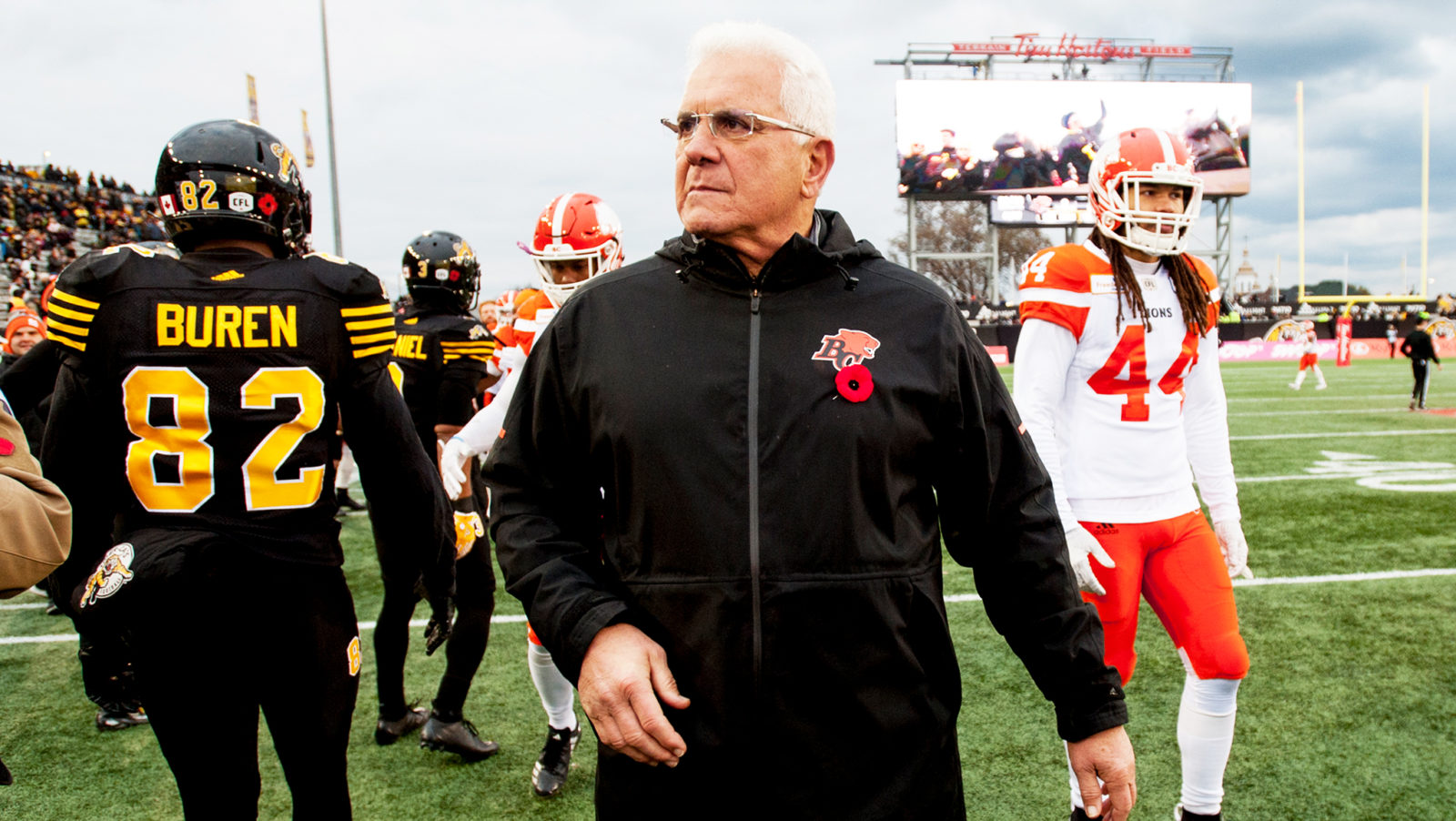 HAMILTON — A 48-8 loss brings to an end to a storied career that got underway back in 1972. It’s a bittersweet way to go out for Wally Buono after his BC Lions lost in unfavourable fashion to the Hamilton Tiger-Cats in Sunday’s Eastern Semi-Final.

“These kinds of things you don’t think about,” Buono said following the game. “When you look at the game, the second play of the game, the ball’s thrown up the seem and our DB falls instead of intercepting the ball. Is that the beginning of a bad day? Is it just fate? You’ve got to give June and his coaching staff a tremendous amount of credit. They had a nice gameplan and the players went out and played it well.”

The Tiger-Cats pieced together a performance that had the Lions shutout until the fourth quarter while Jeremiah Masoli and the Ticats’ offence totalled 450 yards and five touchdowns.

“We didn’t execute,” Buono said. “We didn’t do the things that we had hoped to do and at the end of it, it was a very one-sided game.”

It’s no question, the loss will leave a sour taste the mouth of the CFL’s winningest coach.

“It’s like every other loss. Losses are difficult to deal with,” he said. “Why people leave sports — it’s not the wins, it’s the losses. They’re not what you’re in here for. They are lasting, and they are brutal. The one thing I did think about as I was walking off the field is I wouldn’t have to have this feeling again. It’s not a feeling you wake up tomorrow morning and say ‘I hope I get it again tonight’, right? Losing in professional sports is what I think is hard on men, it’s hard on players, it’s hard on coaches, but we get paid to win, not to lose.”

For an individual who receives the utmost amount of respect from the league’s fans as standing ovations took place across the league during his farewell season, Buono will enter the longest off-season since stepping onto the field back in ’72 as a member of the Montreal Alouettes — retirement.

As to whether Sunday’s loss to the Ticats will sting any longer than others, the Lions’ head-man wasn’t quite sure, and that’s certainly understandable as he gets set to enter an unfamiliar life away from football.

“I don’t know because usually, they do sting a long time,” Buono said. “I always believe if you end the season on a loss, it’s a long time before the next season. I guess the one thing I will say, I don’t have to worry about the next season so maybe it won’t last as long.”

Buono describes himself as a man who doesn’t look too far ahead, and certainly not a person that looks behind at the events that were, good or bad. But as his final post-game press conference went on, it was evident this may have been the first moment he gave himself an opportunity to look towards the future. 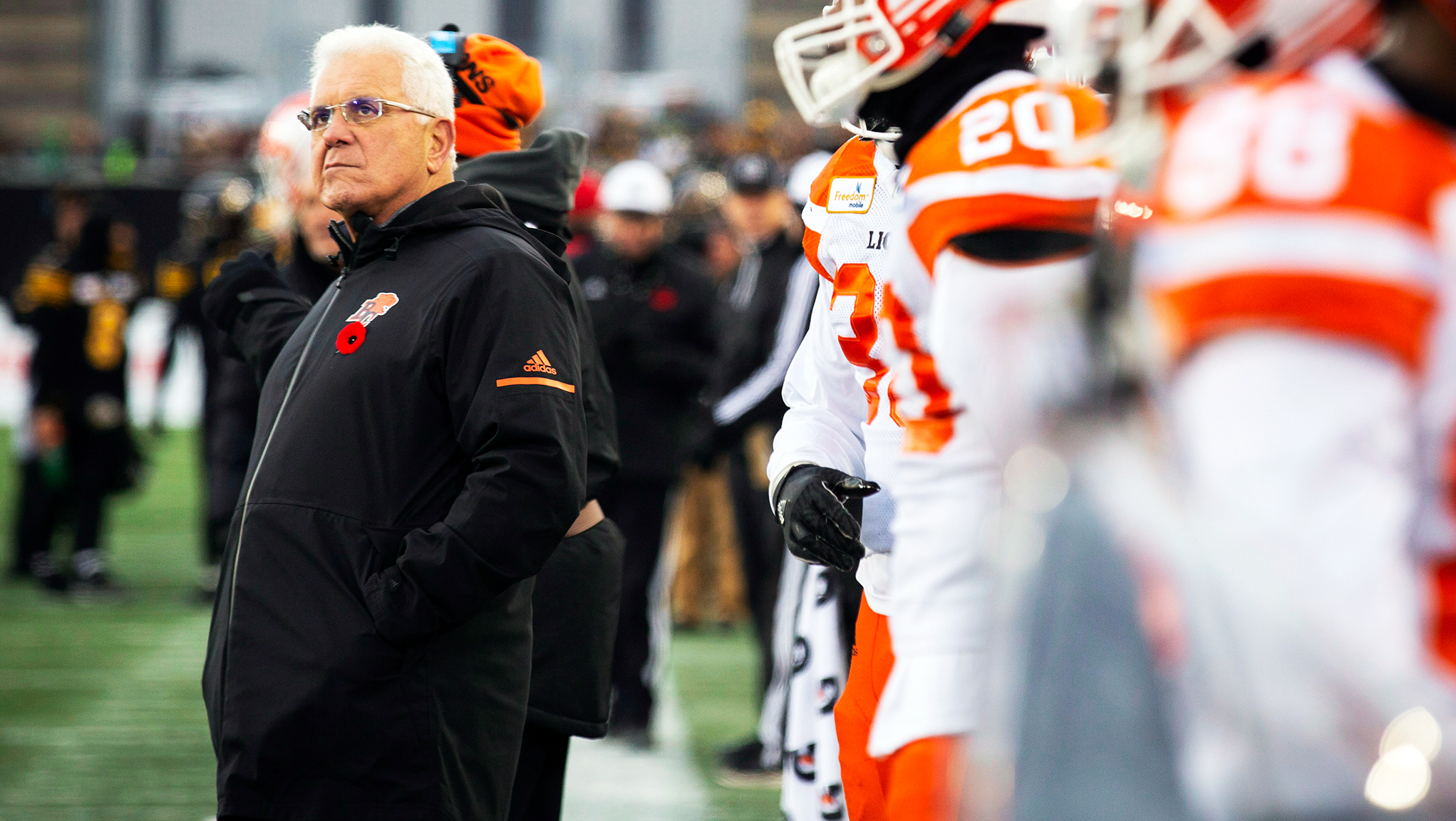 A dejected Wally Buono looks on as the seconds count down in a storied career that ended with a tough 48-8 loss on Sunday (Geoff Robins/CFL.ca)

Honestly, right now, what I’m hoping to be able to do is go home — get things wrapped up and start a new life,” Buono said. “I’ve been doing this for a lot of years. A lot of people have had the opportunity to retire and I’ve talked to a lot of them, and most of them are doing okay, so I figured I’m not that much different. Hopefully, retirement will be okay.”

After a career that’s spanned across five decades as a player, coach, as well as a general manager, a peaceful retirement is much-deserved for an individual that has contributed and devoted so much to the CFL and its fans.

“For people like me, we’ve been around a long time. Sometimes it’s good to just move on.”