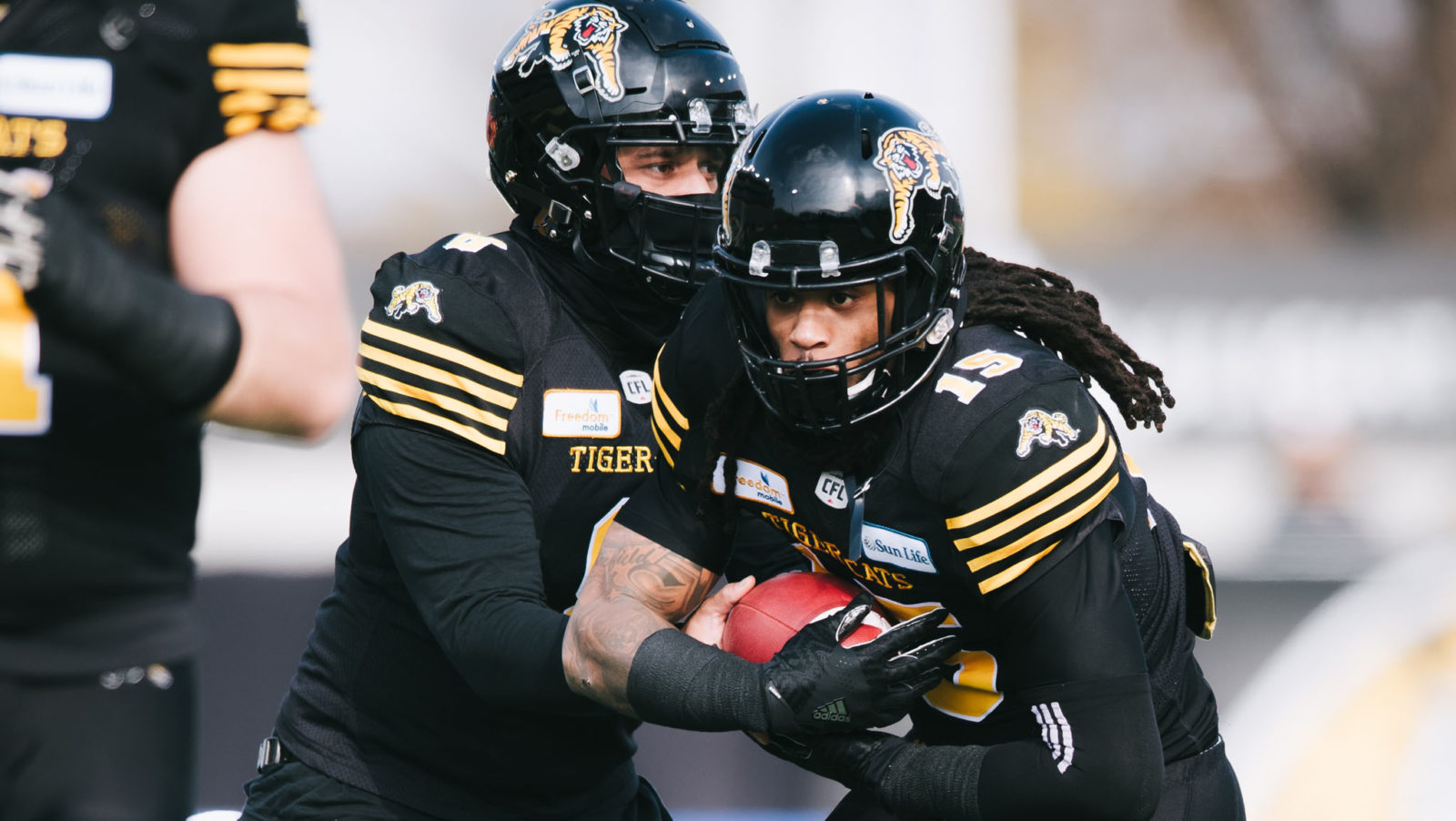 All season long for the Hamilton Tiger-Cats the receivers have been the story. While Jeremiah Masoli has been the story in Tiger Town, the damage done by ill-fated luck to Hamilton’s receiver health and depth has unequivocally changed the Ticats course this season.

With each receiver injury fans have felt less destined to reach the Grey Cup and more cursed to end another season with a loss but recent weeks may have turned that perception around.

Hamilton has found a heightened level of production from Luke Tasker and newcomer Bralon Addison while also re-establishing their offensive line consistency which underlined any success that came during the regular season. Amongst all those positives the Tiger-Cats have sneakily developed one of the CFL’s better running attacks.

After all, June Jones system is called the run and shoot, not the shoot and run.

The key to that ground attack has primarily been Alex Green, a ruling back familiar with Hamilton’s scheme thanks to his time in Hawaii during college.

Green runs with a patience and an understanding of the blocking scheme unlike any other Ticats back which likely explains why he has been given precedent over the likes of John White, who appeared to show a greater burst in the second half of the season, and Mercer Timmis, who carried Hamilton to a win in Edmonton way back in Week 2.

Green catches the ball out of the backfield on swing screens and bubble routes as well as any back in the Canadian Football League while also understanding where to hit the Ticats basic, but extremely effective, run schemes play in and play out.

While Green has carried the load off and on the injured list this season, the true key to Hamilton’s offensive resurgence in 2018 might be best credited from an offensive skill position perspective to a national running back turned slotback.

Sean Thomas-Erlington was drafted by Hamilton in the eight round of the 2017 CFL selection.

The guys does no wrong. From pass blocking to route running, ball carrying to special teams assignments, he must be one of the Ticats highest grading players on coaches film.

In the regular season, Thomas-Erlington – affectionally referred to as ‘Erls’ by Hamilton Head Coach June Jones – followed up Timmis’ Week 2 performance with an 11-carry, 92-yard rushing performance in Week 3 against the Winnipeg Blue Bombers.

Similar to Timmis, since then Thomas Erlington has slid to the background for Hamilton primarily handling kickoff returns and punt coverage responsibilities but in Week 21 he made play after play during a meaningless game in the standings but a massive opportunity for depth players to show their worth.

As a result Sean was given a role in Sunday’s Eastern Semi-Final, which included a started score zone play as a running back, bouncing out to the boundary as a slotback and running a fade route to catch a touchdown.

The 66th overall pick earning the right to be a primary target on a score zone possession in a playoff game. Pretty damn good for someone passed over 65 times.

The more you get to know Alex Green and Sean Thomas-Erlington, the more you understand the Ticats running back room is one of few words and many actions. Along with John White and Mercer Timmis, the Ticats ball carriers will never wear a James Wilder Jr. attitude on their chest or demand camera attention like superstars Andrew Harris and William Powell.

What they will do is show up, take care of their assignment and find a way to help the offence put as many points on the board as possible. They’ll have to do that and more if Hamilton wants to reach their first Grey Cup since 2014 with a win over Ottawa on Sunday.