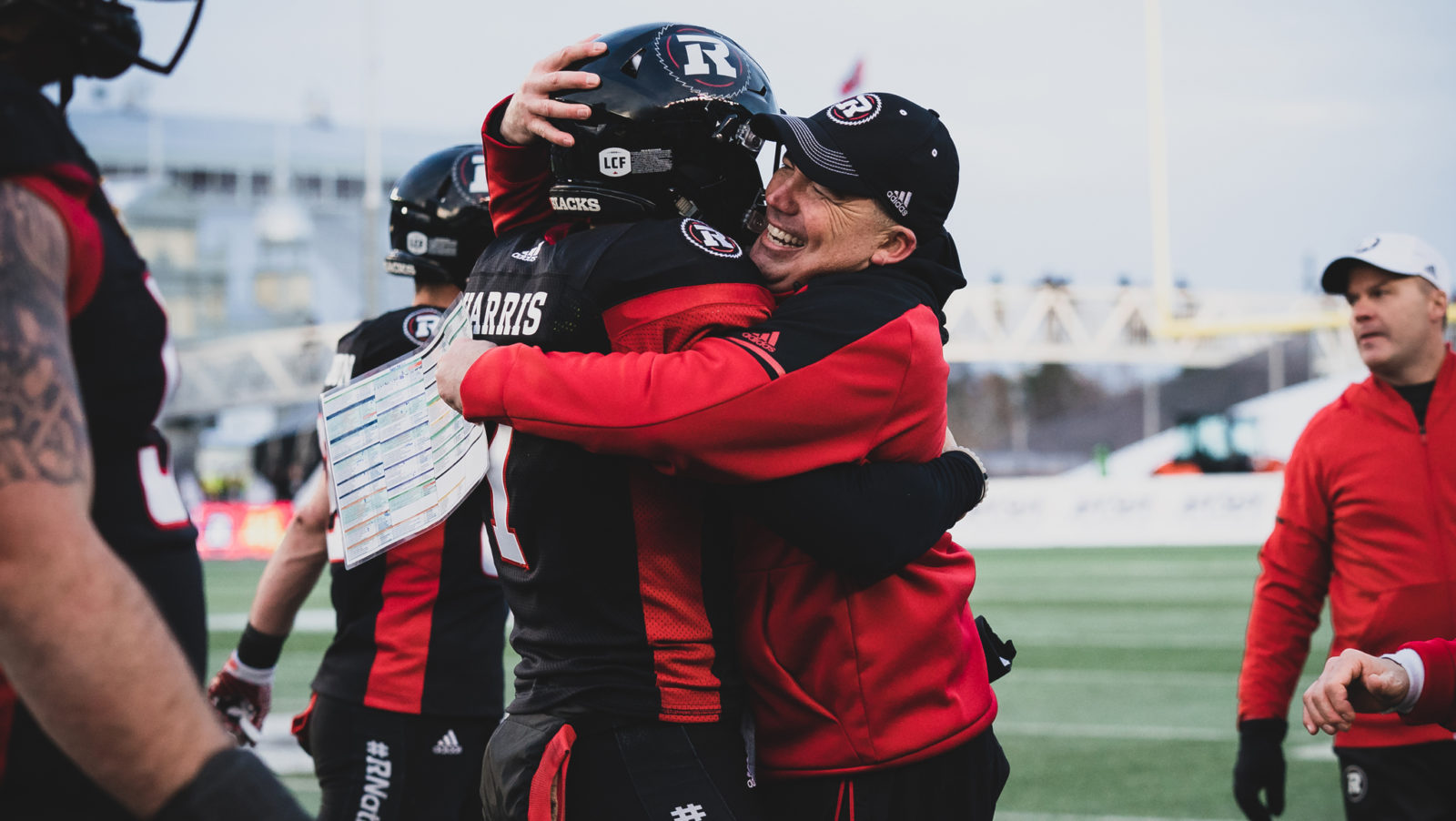 Hello, Micah Johnson. Congratulations on being part – a big part – of Canada’s newest, most over-used cliché: “(insert quarterback’s name here) throws it away with Micah Johnson in pursuit.” Tell me, did you get in your car after the game, wait for Matt Nichols to get into his, and then ride his bumper until he crossed into Saskatchewan?

No. No questions. Nope. Nopity-nope-nope-nope.

No squared. Actually, no to the power of no.

No more sentences beginning with the phrase “yeah, but…” when it comes to Ottawa’s starting quarterback. Unless that sentence is “yeah, but he’s never thrown seven touchdown passes in a playoff game.”

Look. It was fair to wonder if Trevor Harris could carry a team on his shoulders at crunch time. For awhile. He’d only had one playoff opportunity prior to Sunday’s pivotal masterpiece and that was last year when he and the REDBLACKS lost to Saskatchewan in the Eastern Semi.

Harris did put up large aerial numbers in that game but did throw as many picks as touchdowns (two). And his team lost, so we know how that goes.

But even before Sunday’s master class, Harris had actually earned the right to have far fewer people wonder, seeing as how he’d helped orchestrate two late season victories over Hamilton with first place in the East on the line.

After his big performance in the Eastern Final, coming as it did with the weight of all the second-guessing coming down on the 32-year-old, the wondering should cease.

2. FORGET ABOUT SCREEN PASSES WHEN YOU PLAY CALGARY

Yeah, those things ain’t gonna work against the Calgary defence. While playing Winnipeg – and everyone else most of the time, really – they’ve been happy to let you have that call because those secondary guys just roll on up in intolerant fashion and arrive pretty well at the same time that the ball does. They strike like hissing cobras, and they wrap up like the veteran cook at my local burrito place.

That’s just one thing that was noticeable about Calgary’s defence on Sunday. The other? Everything else.

In a defensive struggle that at times felt like me versus that two-year-old jar of pasta sauce I found at the back of the cupboard, the Calgary Stampeders were the ones to find a way to gain the upper hand in the Western Final.

Both defences deserve immense respect for the kind of football they played, freezing out each other’s vaunted offences for long stretches, including most of the second half.

Finally, midway through the fourth quarter, the Stampeders loosened the top on that pasta sauce jar and heard that satisfying, vacuum seal-breaking, pop. A long out to Richard Sindani. A big run by Don Jackson. And a spectacular end zone catch by Eric Rogers to complete his touchdown hat trick, putting the game out of reach.

“It just comes down to a couple of plays here or there that make the difference in a game like this,” said Bombers’ QB Matt Nichols after it was over. “They kinda made ’em and we kinda didn’t.”

BONUS TAKEAWAY: Matt Nichols failed? More like the Calgary D refused to let him succeed. Over to you, Trevor Harris.

BONUS BONUS TAKEAWAY: A lost opportunity. Don’t know about you, but I was kind of looking forward to seeing how Mike O’Shea would’ve handled the traditional sex question at the Grey Cup coaches’ media conference.

For those who wondered if it wasn’t a bit much to ask a team to beat the other guys for a fourth time in succession, the answer is that it is NOT too much to ask, so go ahead.

It’s a big blow for the “Odds are” camp. You know, the people who say “odds are they can’t do it again.” Not only can you beat ’em for a fourth time in a row, you can use that fourth win as an emphatic verification of the validity of the first three.

And it can make one forget about the times your team had its wheels stuck in the mud in weeks past.

The REDBLACKS had their share of ho-hum games in 2018, leading some of us to wonder if they really had the stuff to be a contender when November came. Even Head Coach Rick Campbell, earlier in the season, seemed frustrated that his boys could lay down a beauty one week, only to lay an egg the next.

“Any time the pressure’s on and we have that sense of urgency and we feel like we need to win, we play big time,” said Ottawa running back William Powell after the game. “And we’re gonna bring that to the Grey Cup.”

BONUS TAKEAWAY: Does anyone yet know the location of the Jon Gott hospitality suite in Edmonton?

5. A BUMPY RIDE MIGHT HAVE THE STAMPEDERS BETTER PREPARED THAN BEFORE

In both 2016 and 2017, the Calgary Stampeders locked up the West by, I dunno, Canada Day, I guess, and cruised most of the way through to the Grey Cup Game where they were beaten by the REDBLACKS and then the Toronto Argonauts.

It was too easy, too soon, many argued, with the Stamps not getting a big taste of the hard autumn football that can temper the steel of a
team’s resolve. REDBLACKS had it. Argos had it. Stamps had lounging on the Lido Deck instead. As talented as they were and as well-prepared, strategically, as they could be, they still were lacking in the hard knocks that traditionally kiln-fire a team’s consolidation.

This year, the Stamps have had mounting injuries to overcome, as well as a late-season losing streak and then a must-win to clinch a divisional
crown to yank the laces of brotherhood tight. As well, they had a formidable opponent push them to their limits in the Western Final.

This has been much tougher. Will it provide them with what they’ll need on Grey Cup Sunday?

BONUS BONUS TAKEAWAY: You want some Grey Cup Game mayhem? Have both teams wear their black uniforms and turn the stadium lights down low.

Yes, Brandon Smith is still back there and he’s still doing everything right.