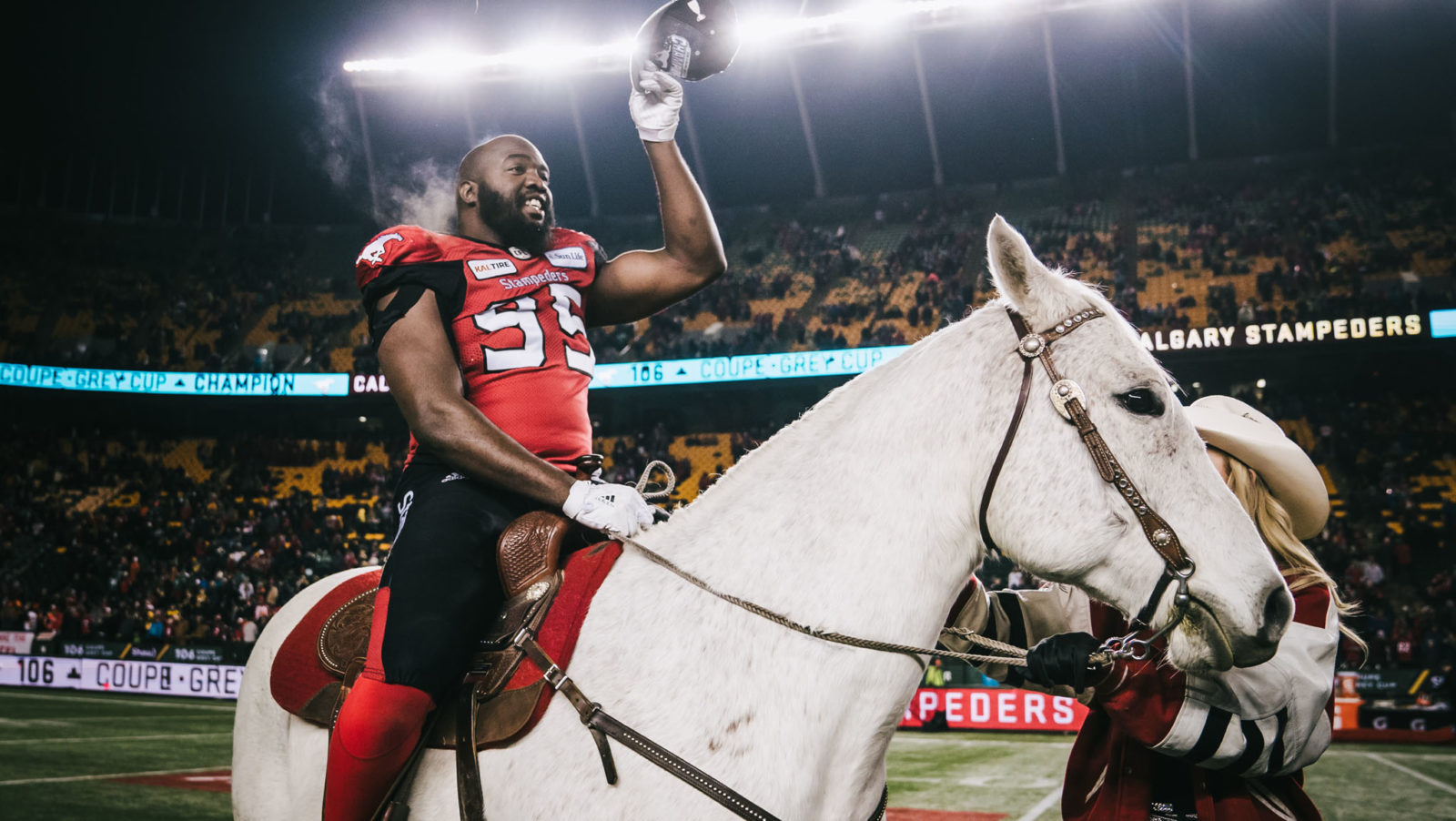 So often, massive build-up can be followed by deflating letdown; stark reality doesn’t, can’t, measure up to the longstanding dream.

“Oh, in this case it does,’’ assured Lemar Durant, his Most Valuable Canadian keepsake trophy tucked under one arm. “More than measure up to expectations, it exceeded them.

“Especially considering the years we went and couldn’t quite pull it off. This actually was bigger, felt better, than I’d imagined it would.

“A moment I’ll remember? Well, we’d been there before, of course, and let it slip away so standing on the field, the game was winding down, maybe a minute left, I was able to look around, soak it all in and embrace the situation.

“And we’re there, in that last minute, and you’re thinking: ‘We’re really going to pull this off …’

The three buses hauling a tired but blissful bunch of Calgary Stampeders back from Edmonton rolled into the McMahon Stadium parking lot around 12:30 p.m.r

“It’s a lot to process right now,’’ confessed wideout Chris Matthews, who now has some consolation for his 2015 Super Bowl disappointment.

“We’re the champs. We’ll have a target on our backs next season. But that’s okay. Every other team in this league would like to have the same target.

“It’s the Grey Cup, man. Doesn’t get no bigger in the CFL. I was getting phone calls and text messages all last night, all today, while I was trying to sleep.

“But it was congratulations, all that good stuff. I haven’t been able to go through all of ‘em yet but I will.

“And believe me, I appreciate everybody reaching out, for sure.”

For rush end Ja’Gared Davis the joy of his brethren is what will long remain in memory.

“When I walked in the locker room and saw the smiles on everybody’s faces, that really hit me,’’ he said. “To feel that sigh of relief, like we climbed Mt. Kilimanjaro, an unbelievable feat, and to do it as a team, put together a complete game in all phases – offence, defence, special teams … you couldn’t ask for no more.

“It means a lot. I wouldn’t be here now without the man upstairs. Coming from a small town, Crockett, Texas, all the way to becoming a Grey Cup champion. That’s quite a ride.

“The thing that meant the most to me was running up and hugging my mom (Gayla) at the end of the game when she was on the field. My mom’s always been my No. 1 fan, she’s always been in my corner. She’d drive 12-plus hours to see me play, whether I was in high school, college, even in the CFL, NFL.

“So to have her there to celebrate this special moment with me and my brothers felt like the best feeling in the world.”

Offensive lineman Derek Dennis returned from a year away in Saskatchewan and is mighty happy he did.

“Taking a drink out of that Cup, there’s no feeling like it,’’ said ‘the Bonecrusher’. “I’ve got to thank this organization for welcoming me back, otherwise I wouldn’t be standing here right now, a Grey Cup champion. Like the sound of that: Grey Cup champion.

“This group deserves it.”

The group Dennis mentioned, as is, the men that alighted from those three buses shortly after lunchtime Monday, will not stay lock-stock-and-barrel together in 2019. That is simply the way of the sporting world. There’s a CBA to negotiate, decisions to be made in a salary cap world, potential other aspirations and opportunities to pursue.

“Honesty, it’s just great to win a championship,’’ said head coach Dave Dickenson. “Even better to win it in Edmonton.

“I’m a little partial to quarterbacks. I mean, I know the pressure Bo was under. I’ve been there. And everyone’s talking about how this game will define his legacy. I’m directly tied with Bo. I’m glad for him, ‘cause he wins me a lot of football games.

“But I wanted it for everybody. Alex Singleton, because yeah he’s only been in the league three years but this was his third Grey Cup and he doesn’t need to not be feeling that feeling.

“So for them to be such leaders for our group and get it done, I thought that was great.

“A fun atmosphere. The weather was nice. For us, just a picture-perfect win.”