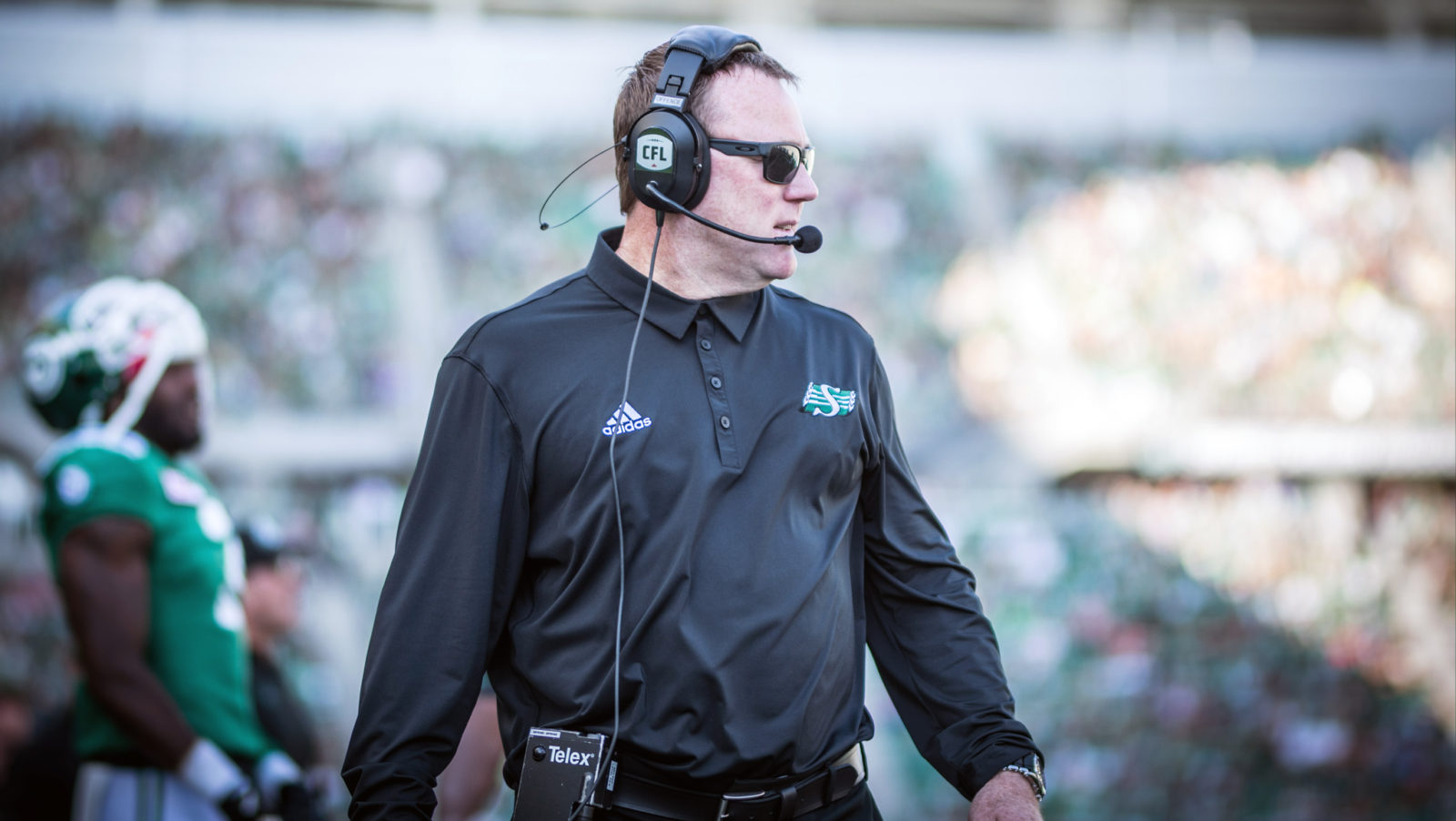 2019 is almost upon us and we’ve got a resolution for all nine CFL teams, starting with the Grey Cup champions. 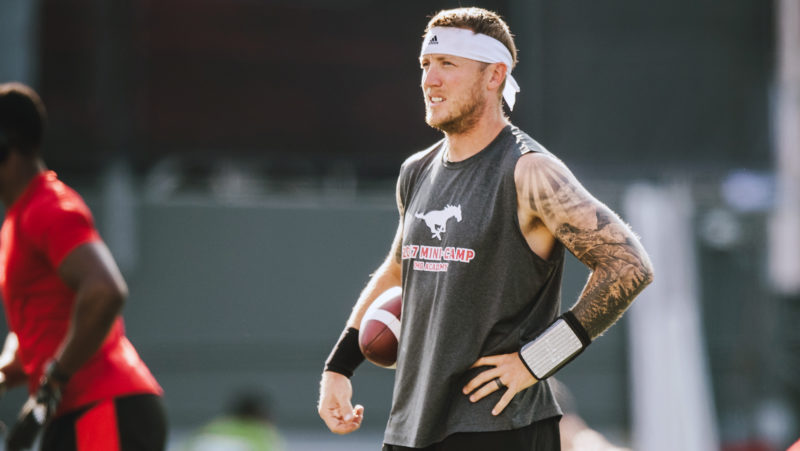 Bo Levi Mitchell is one of many big names from the Stamps eyeing going down south next season (Johany Jutras/CFL.ca)

What big name player isn’t potentially on their way out in Calgary? Bo Levi Mitchell, Alex Singleton, Jameer Thurman, and Micah Johnson are among the key cogs getting significant interest from other teams, on either side of the border. As such, the Stamps might want to ensure they’re as convincing as possible in retaining their 40+ pending free agents.

In reality, though, Calgary can’t be any more convincing than they already are. The Stampeders are coming off another dominant season capped off with a Grey Cup victory and they’ve proven to be the league’s most consistent team in John Hufnagel’s decade at the helm.

Sure, NFL opportunities and big paydays might lure a few names away, but you can be sure Calgary’s pedigree will allow them to keep a good number of their best players in the fold at reasonable prices. 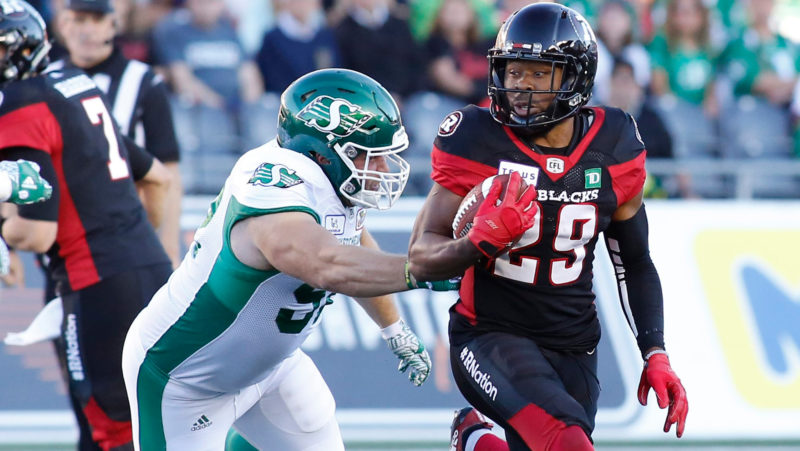 With William Powell in their backfield, it might seem counterintuitive to suggest the defending East Division champions need to run the ball more effectively in 2019. In reality, though, Ottawa had the league’s least effective rushing attack last season, despite the absolute beast they have at the top of their depth chart.

The REDBLACKS averaged 94 rushing yards per game despite finishing the season with the third highest amount of attempts. That’s hard to wrap your head around, but Ottawa was very much a feast or famine team with their run game in 2018. They had some huge games, for sure, but also had a number of very ineffective nights running the ball.

EDMONTON ESKIMOS: ALL ABOUT MIKE REILLY 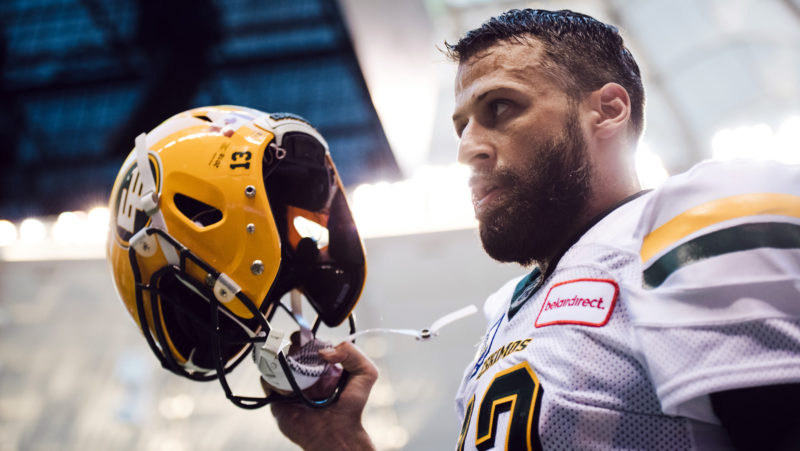 Will Mike Reilly be with the Eskimos next season? (Johany Jutras/CFL.ca)

There’s not a higher profile free agent this off-season than quarterback Mike Reilly and Edmonton’s number one priority this winter is bringing him back. I’m not sure if there’s a player who has defined their team more than Reilly has the Eskimos since his arrival in 2013. He has spearheaded the team’s return to prominence and losing him in free agency would be an absolutely massive loss.

What makes this very eerie for Edmonton is how hard Reilly’s future is to handicap right now. Contemporary Bo Levi Mitchell’s future is also uncertain, but he’s made it crystal clear he’ll be back in with the Stampeders if he doesn’t land a roster spot in the NFL. We haven’t heard the same type of declaration from Reilly.

There are all kinds of rumors surrounding 2017’s Most Outstanding Player with the most prominent being a link with Ed Hervey and the BC Lions. I’m not sure exactly what it’ll take to keep Reilly in Edmonton, because he’s already one of the highest paid players in the league. Even still, “whatever it takes” is what the Eskimos have to be prepared to do.

HAMILTON TIGER-CATS: TURN THAT BALL OVER 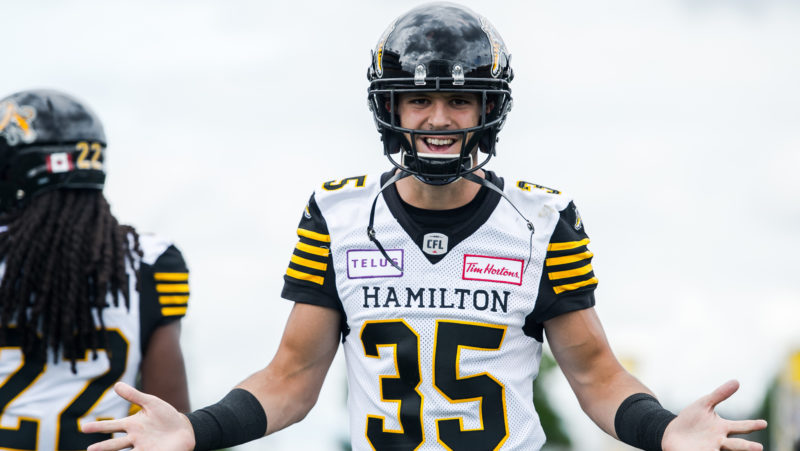 Hamilton boasted one of the league’s best defensive units last season and was right there with Calgary, Saskatchewan, and Winnipeg near the top of most statistical categories. Those four teams made up the elite group of CFL defences last season but the Ticats lagged well behind the pack in one category: turnovers forced.

The Stamps and Bombers led the way with 49 takeaways, while the Riders finished right behind them at 41. With 31, though, Hamilton finished ahead of only Toronto in the category, which is hard to figure knowing some of the playmakers they boast defensively. The Tiger-Cats were second last in both interceptions (14) and fumble recoveries (8), which robbed them of the opportunity to cash in with a very effective offence.

Winnipeg, Calgary, and Saskatchewan all finished with at least 140 points coming directly off turnovers, which is significantly more than Hamilton’s 81. Knowing how efficient the Ticats are with the ball in their hands, a few more forced turnovers in 2019 could be the difference between a few wins and losses. 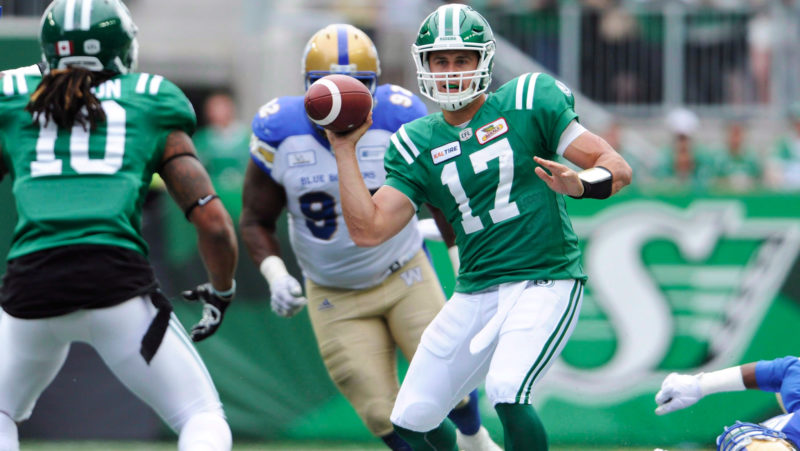 This was one of the easiest ones to settle on because the Riders just didn’t get consistent enough play at quarterback in 2018. Their blockbuster acquisition of Zach Collaros didn’t pay the dividends they had hoped while Brandon Bridge was inconsistent at best. Both guys are free agents this winter and even if we see one or both return, Saskatchewan can’t be confident in either as a viable starter.

Of course, solving this issue is easier said than done. It’s not like Saskatchewan didn’t try to address their void at pivot last winter, because they did. Do they chase a big name like Reilly or Trevor Harris? Perhaps a change of scenery for Jonathon Jennings is exactly what he needs to get his career back on track? Whatever the case, you know solving things at quarterback is written at the very top of Chris Jones’s priority list. 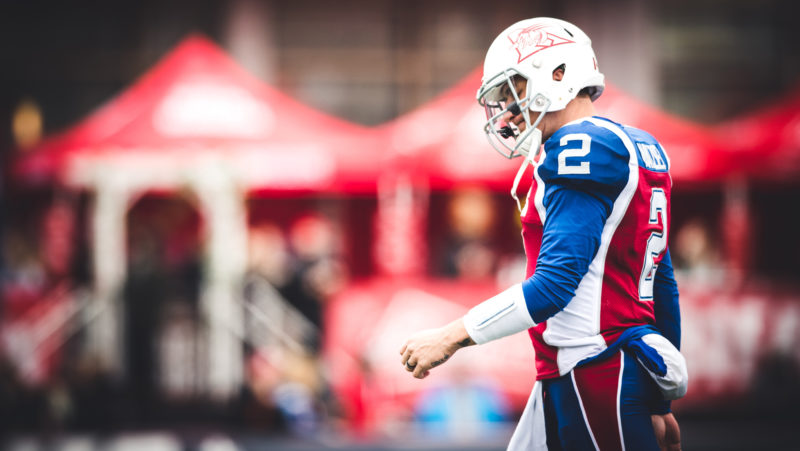 Keeping Manziel protected in 2019 will be key for the Alouettes (Johany Jutras/CFL.ca)

…or whoever is playing quarterback in 2019. We assume Johnny Manziel will be back to build on the promising trends we saw from him in the final six weeks of the season. While not spectacular, Manziel looked generally effective and occasionally electrifying upon his return from injury in September. Now he just needs a little more protection.

The Alouettes allowed a whopping 66 sacks last season, which is almost four per game. Plain and simple, opposing defences were all over Montreal quarterbacks in 2018, which made it hard for Manziel, Antonio Pipkin, Drew Willy, or anyone else to have much success. If the Als want to be competitive next season, they can’t have their guys on the run and taking big hits on a regular basis.

BC LIONS: MIX IN A ROAD WIN 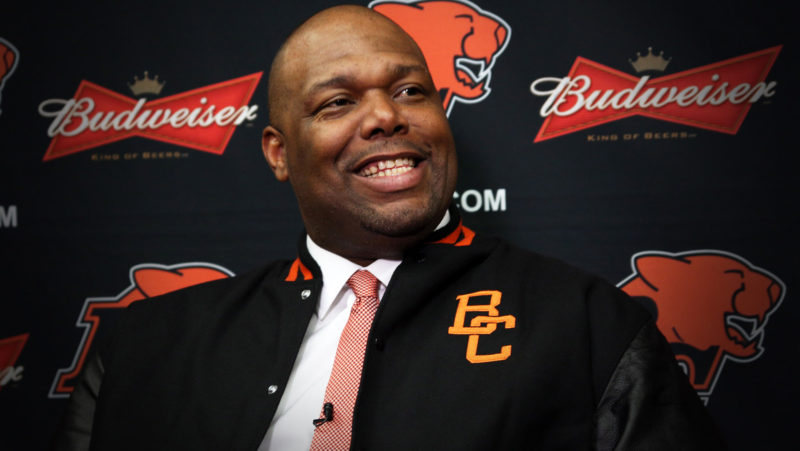 DeVone Claybrooks and co. will have some work to do away from BC Place (BCLions.com)

At 9-9, the Lions clinched a crossover spot and were subsequently crushed by Hamilton in the East Division Semi-Final. Just think of how much better BC could have been if they could have figured things out on the road, though.

No one boasted a better home record in 2018, as the Lions finished 7-2-0 at BC Place (Calgary and Edmonton had identical home records), which is great. With an inverse record on the road, though, only Toronto’s 0-9 mark was worse than BC away from home.

No one is going to scoff at a great home record, because that’s the mark of a good team, at least in part. No one is saying the Lions need to run the table on the road in 2019, but a slightly better record would go a long way in finishing higher up the West Division standings. 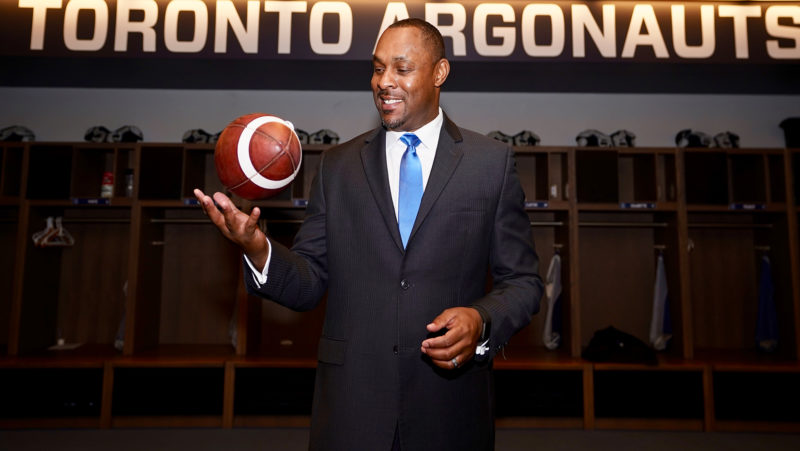 Can Corey Chamblin and the Argos gel quickly in 2019? (Argonauts.ca)

2018 was a nightmare in Toronto and matters were made worse knowing their Grey Cup triumph the year before. As a result, there might not be a team with more change in the offing than the Argos, which means plenty of potential growing pains when balls start flying for real in June.

Toronto has already replaced Marc Trestman with Corey Chamblin at head coach, with the latter returning after a year with the University of Arkansas. Chamblin has a solid head coaching resume and will likely have a whole host of new personnel, so meshing quickly is going to be key for the Argos.

Fortunately for Toronto, both quarterbacks from last season are under contract for 2019, which means a little less uncertainty at a key position. James Franklin and Mcleod Bethel-Thompson still need to duke it out for the top of the depth chart, but that might be the least of Chamblin’s worries come camp. 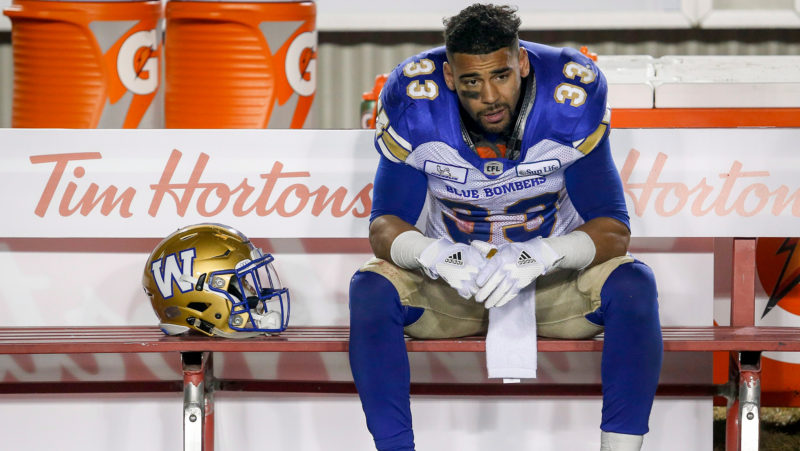 Andrew Harris has been the main piece of the Bombers offensive attack but who else can help carry the load? (CFL.ca)

Andrew Harris is one of the most exciting and dynamic players in the CFL and is coming off another incredible season. Unfortunately, running an offence primarily, and sometimes almost exclusively, through a running back isn’t overly sustainable for success, especially come playoff time.

I love Harris and I’m not trying to take anything away from how well he’s played the last few seasons. But for the Bombers to truly get over the hump, a more diverse and dynamic attack is important. That means a little more consistency from Matt Nichols at quarterback and primary target Darvin Adams. It also means players like Drew Wolitarsky, Nic Demski, and even Weston Dressler need to make more of a regular impact as opposed to the fits and starts we saw in 2018.

Having a weapon like Harris is a desirable thing. Making your arsenal a little more diverse around him is the next important step Winnipeg needs to take