MONT TREMBLANT, QUE. — It appears that Riders head coach and general manager Chris Jones will not be following the handful of CFL players that have signed contracts south of the border this month.

Though, at least for a few days, fans and reporters at least entertained the notion, after Jason La Canfora reported that NFL teams were interested — including at least two that had done ‘extensive research’ on the Riders’ bench boss.

On Tuesday, the same day he signed a one-year contract extension through 2020, Jones responded to the thought of him coaching south of the border.

“I have not spoken to anyone in the NFL personally,” Jones told CFL.ca’s Chris O’Leary during the annual president and general managers meetings in Mont Tremblant, Que. “I’ve had a lot of people calling me asking some questions, guys that have been in the league and coached in the NFL, some guys that have coached in college with me — I think it’s three or four teams from what I could gather.” 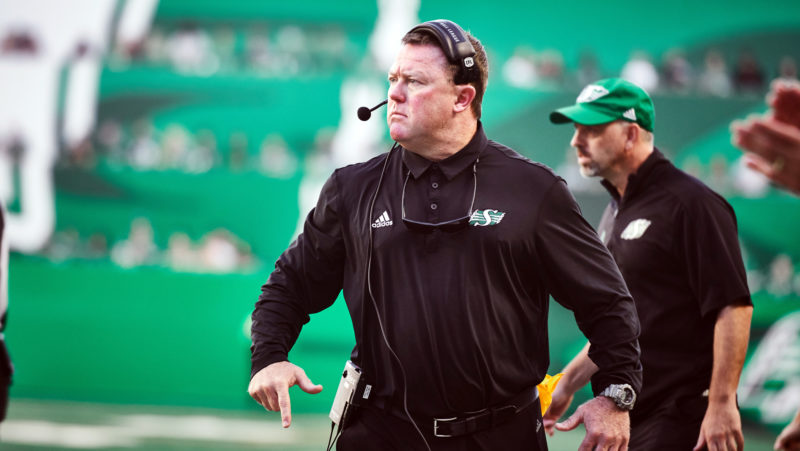 Chris Jones says his team has ‘unfinished business’ to tend to in 2019 (Arthur Ward/CFL.ca)

Alex Singleton, D’haquille Williams and Diontae Spencer are among players that have been released to sign NFL deals this month in what’s been a busy off-season for the three-down league.

Jones said coaching in the NFL has been a long-time dream of his — but the Riders’ head coach and general manager says he’s focused on winning in Saskatchewan. ‘Unfinished business’, Jones called it less than two months after being eliminated in the Western Semi-Final.

“I’m no different than any of the players — I grew up watching the Pittsburgh Steelers and Dallas Cowboys, they were my two teams and I liked Atlanta because they were close,” said Jones. “You grow up wanting to coach at the highest level of football.

“I’ve got a job, and I’ve got a very good job in a very good organization with a good group of coaches and a great group of players in the locker-room that have some unfinished business. That’s the focus. I try not to worry about tomorrow. If it happens, it happens.

“I’ve seen a lot of guys that have been at the highest level and the next thing you know they’re coaching high school football. I think in coaching you take it slow and you take it year by year and try to just do as good a job as you can, and the rest of it is up to fate.”

Despite being one-and-done in the playoffs, the Riders had their best season yet under Jones, finishing second in the West with a 12-6 record, a game shy of the league-leading Calgary Stampeders. But a 23-18 loss to the Winnipeg Blue Bombers in the first ever playoff game at new Mosaic Stadium has still left a sour taste in Jones’ mouth.

“When you sit there and you look and you’re top one or two in rushing, top one or two in sacks allowed, you tie a 100-year record in defensive touchdowns, you lead the league in just about every special teams category . . . and you get put out in the first round, certainly when you start the season that’s not where you think you’re going to end.

“It’s unfortunate, but you get injured at the wrong time and that’s what happens. We’ve got to find ways to finish games earlier in the year and then we’re not even playing in that game. If we get a quarterback sneak in Edmonton in that game, we win the West and Calgary’s playing Winnipeg.”

The Riders have a number of priorities this off-season, from pending free agent Willie Jefferson to the NFL-bound Sam Eguavoen, but Jones wouldn’t side-step the most popular topic among Riders fans and media this off-season: the quarterback question. While Zach Collaros struggled with injuries in his first season with the Riders, Brandon Bridge and David Watford couldn’t find consistency.

Finding a long-term answer behind centre is likely the team’s top priority this off-season.

“Our organization should be like everybody else — we should be trying to get the best guy we possibly can. We owe it to our fans and we owe it to our team to look and have open eyes to everybody that’s available. It’s a good year for quarterbacks to be out there.”