Ferguson: What does Trevor Harris bring to the Esks? 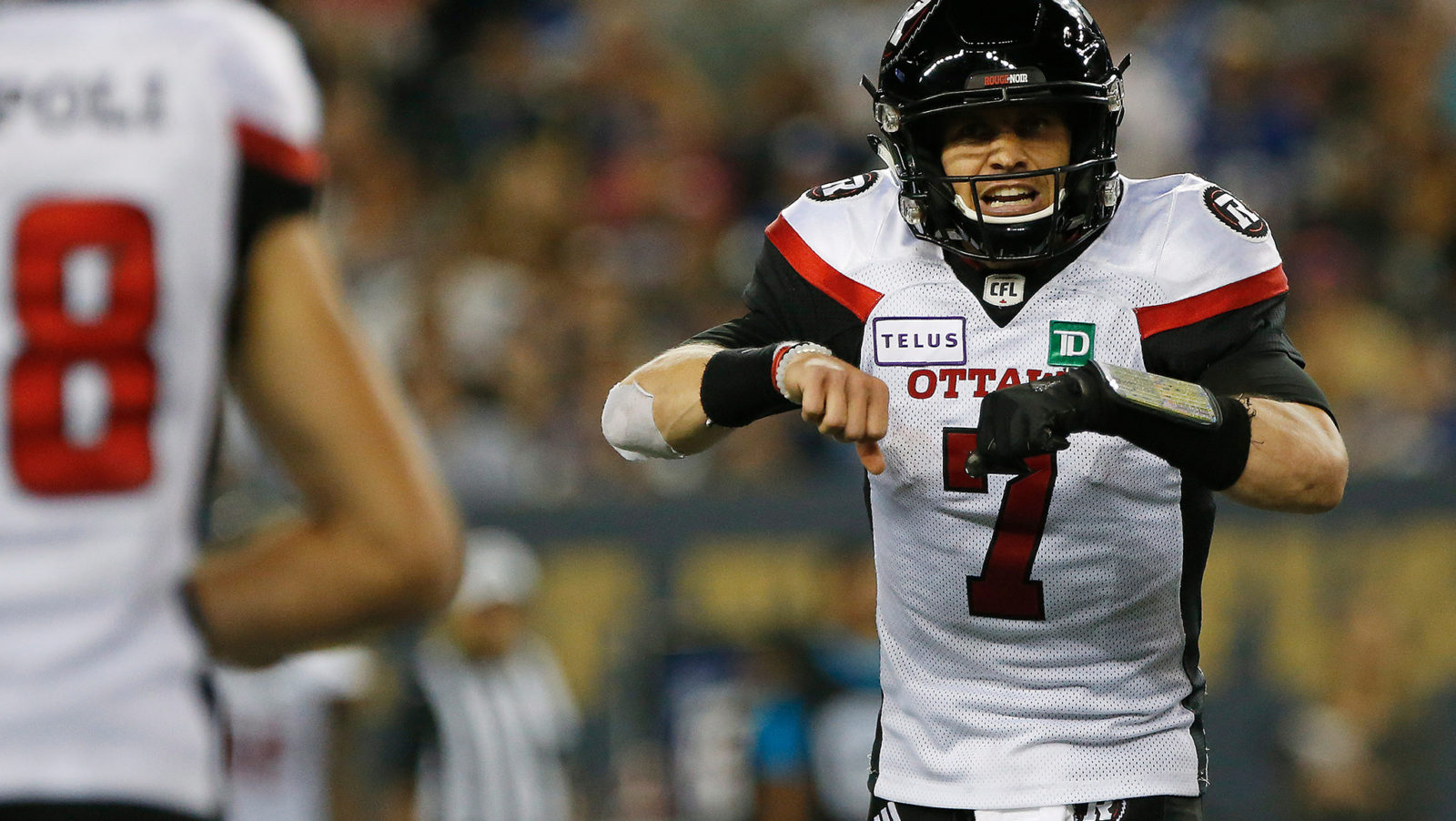 Ferguson: What does Trevor Harris bring to the Esks?

We’ve all been there. Your favourite team is up against it. Not in a do-or-die playoff game. Not late in the fourth quarter.

You want certain players back but it just doesn’t look like it will happen, yet you hold out hope. You continue to believe that somehow, some way your favourite athletes will remain in your team’s helmet or uniform against all odds.

Then – in a moment – they’re gone. The realization sets in and you have to turn the page. Sports fans typically have a tough time doing this and resort to one of two instinctual reactions.

The first is to boo and hiss at the player that left as a way of exacting your pound of audible flesh – see Vince Carter’s first return to Toronto. The second is to weep quietly in a basement corner hoping your wife and kids don’t see you because it would be awful for your family street cred.

The only way to solve that feeling is for your team to make the best of the cards they’ve been dealt.

In February Brock Sunderland did just that. He took the money likely cordoned off with a red velvet rope for Mike Reilly and redistributed it with precision upon confirmation that the Eskimos franchise quarterback would be taking his talents further west to Sunshine Beach Park.

While Sunderland and staff rebuilt Edmonton in many phases – as required by the southern defection of J.C. Sherritt and eventual loss of Derel Walker – the purpose of this piece is to focus solely on the move to acquire Trevor Harris as the team’s next huddle leader.

What are the differences Eskimos fans can expect between Reilly and Harris? What will feel different about watching Harris replace Reilly in green and gold at Commonwealth Stadium? How will Edmonton adapt to Harris’ game?

These thoughts and many more came rushing to my mind as I sat in front of a microphone on TSN radio during the free agent frenzy when a flood of tweets came in with some combination of the words “Reilly,” “Harris” and “WOW!”

First let’s take a look at the most obvious difference between the two, short yardage sneaks. It might not seem like an interesting place to start but this is a philosophical question that every organization has to ask themselves: How much do we value our starting quarterback’s health? How much of a short yardage beating do we believe they can take and how do we want to construct our quarterback room?

In Ottawa Trevor Harris took just six – Harris would convert four of them – of the REDBLACKS’ 54 snaps in second or third down and a single yard to go. That’s just 11.1 per cent compared to Reilly taking 42 of 50 (84.0%) similar situations in 2018 for the Eskimos. 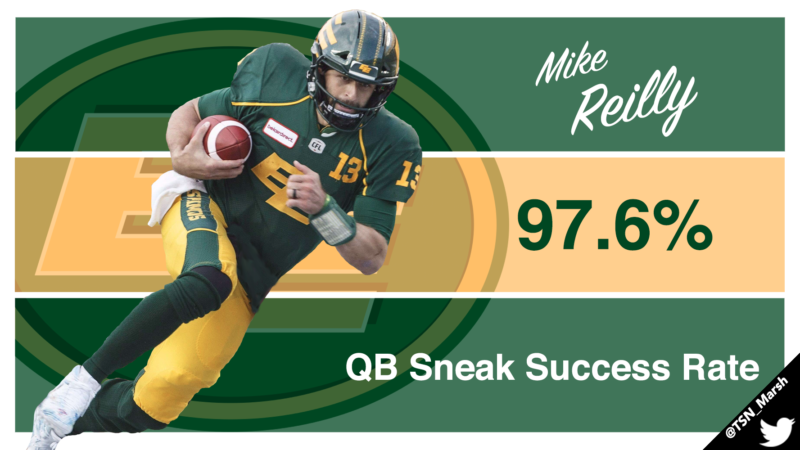 Mike Reilly has always been a short yardage master and was the preferred choice to backups Danny O’Brien and Kevin Glenn, but Harris has rarely been asked to take on the task. Especially last year when Dominique Davis – who is now described as the 1A to Jonathon Jennings‘ 1B in Ottawa’s QB duel – carried the load, which you’d imagine he’d continue to do if being named REDBLACKS’ starter come June.

The most notable difference stylistically between Reilly and Harris’ that Edmonton fans will be sure to notice come 2019 kickoff is the depth of target. Here are Harris’ 2017 attempts by zone on the field. 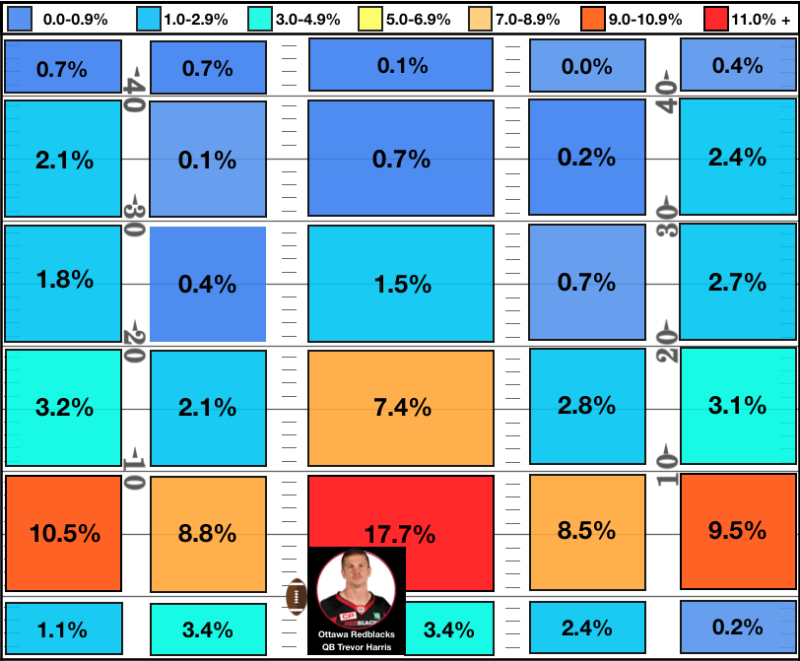 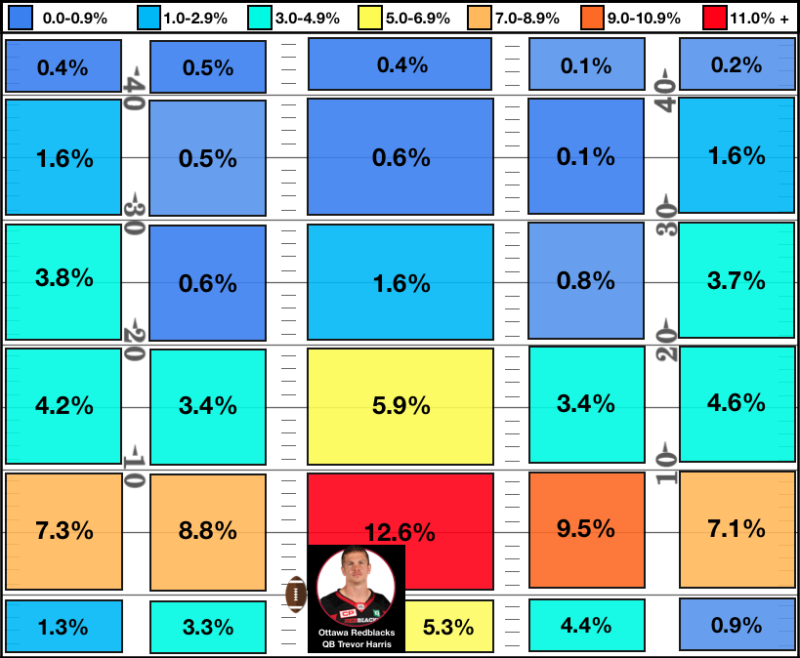 There is a clear trend of icy deep blue – signifying low target percentages – on anything over 20 yards for Harris over the last two years. Meanwhile ol’ gunslinging Reilly has been heaving the Wilson – by the way can we just rename it the Russ for Russ Jackson like the NFL has ‘The Duke”? – down the field at or near a league high level in both 2017 and 2018: 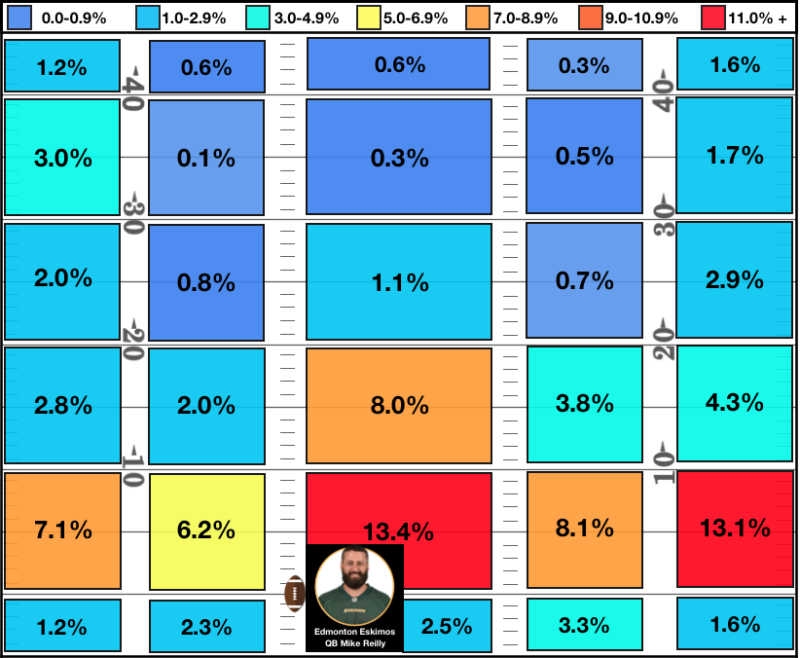 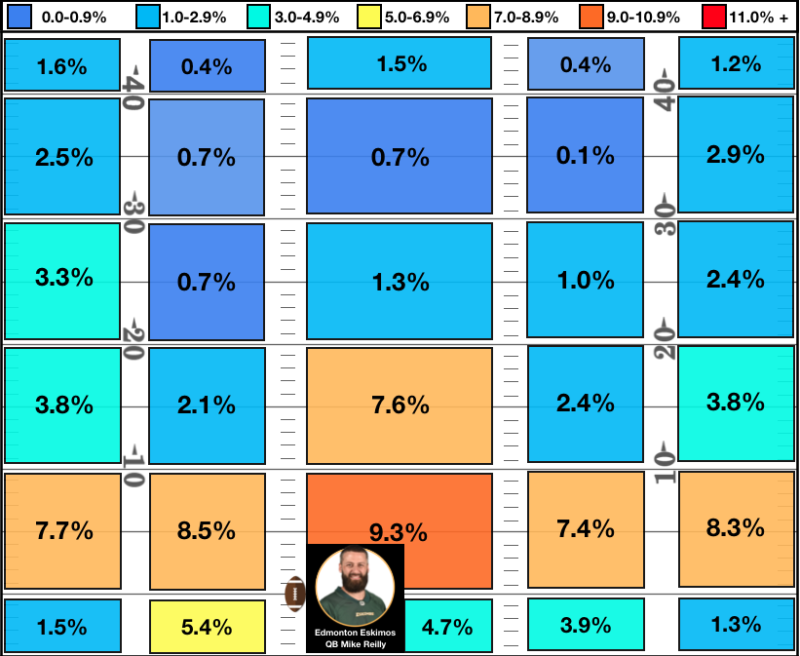 Meanwhile Reilly’s downfield aggression on first down dropped considerably, but don’t worry. Mike would do his best to rectify that with a staggering second down increase in 2018 depth of target. 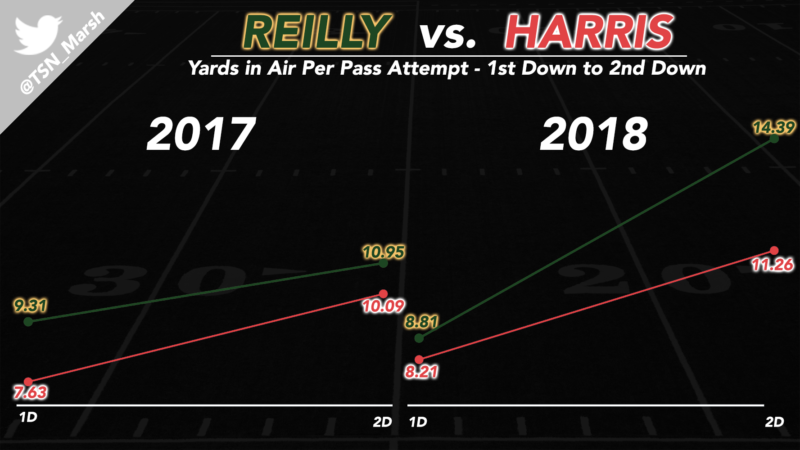 For Eskimos fans wondering whether Trevor Harris is spectacular in a certain point of the game, a specific down or part of the field the answer honestly is no. He’s above average everywhere based on his 2018 splits – comprised of quarters, downs and field position – but not dominant anywhere. 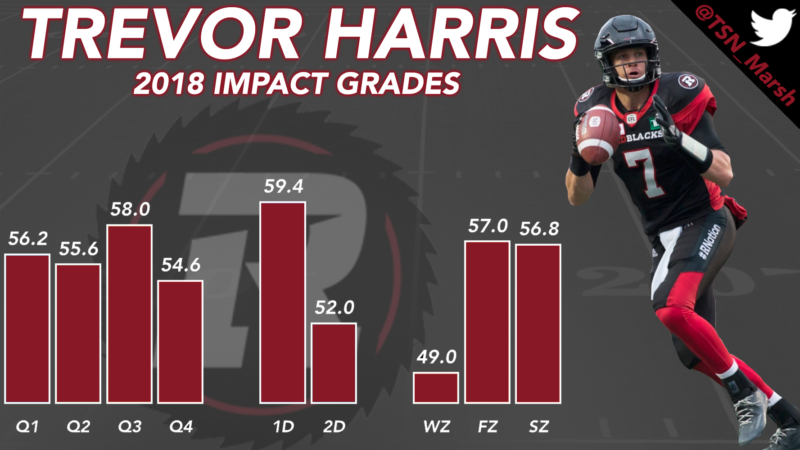 Mike Reilly, meanwhile, even in a year where the wheels fell off and Edmonton failed to make the playoffs, was exceptional in the score zone (63.2) relative to Harris, but his second down production grade (48.2) shows an obvious Achilles heel to the Eskimos ability to move the ball. 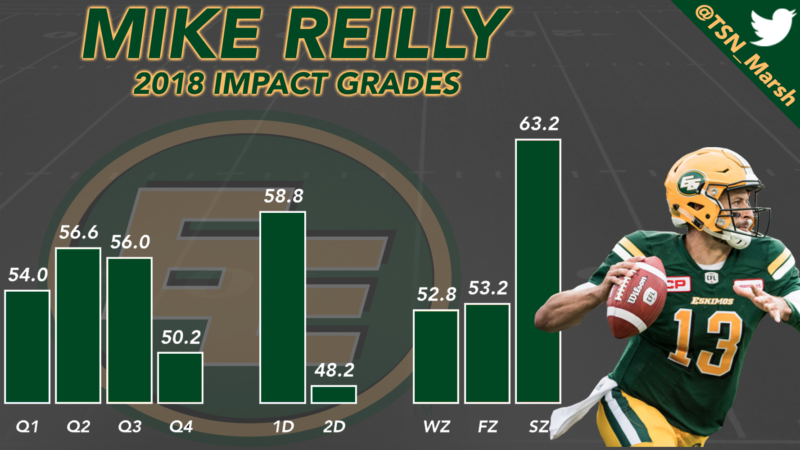 For Harris the ability to work alongside a workhorse of a running back will be nothing new. Despite now former REDBLACKS running back William Powell leaving for Saskatchewan in free agency, CJ Gable awaits Harris’ arrival with a similar effect on the game. 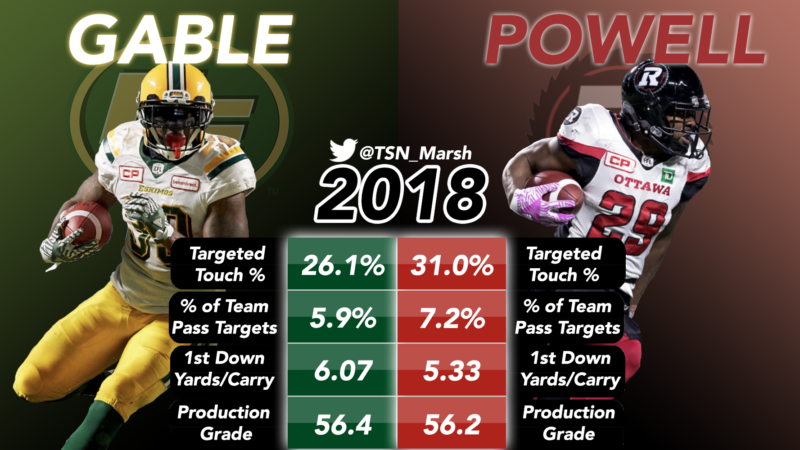 Harris also brought Greg Ellingson with him to Edmonton in free agency which should help stabilize the Eskimos’ offensive attack, especially early in the season thanks to familiarity with each other and Head Coach Jason Maas’ offensive attack. Despite an up and down year with Ottawa that ended with a thud at the Grey Cup in – where else – Edmonton, Ellingson remains one of the game’s best and we are all better off when he and Harris are speaking the same language from snap to whistle. 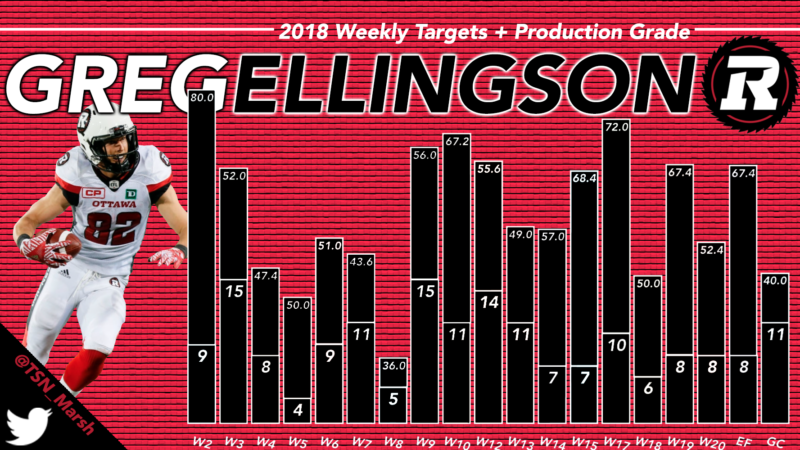 The Eskimos added Harris, Ellingson, Calgary standout DeVaris Daniels, an elite offensive tackle in SirVincent Rogers and a whole host of fresh talent on defence. They took what could have been a memorable day for the worst reason and turned CFL free agency on its head with the biggest move being Harris to replace Reilly.

It will be weird to see Harris in Eskimos colours, the style of play will feel different and the results could be better or worse than Reilly but the one thing I do know is I’ll be watching with many of you excited to find out what the Trevor Harris-led Eskimos of 2019 look like.