TORONTO — Tickets for Touchdown Atlantic, which will take place between the Toronto Argonauts and Montreal Alouettes on Aug. 25 in Moncton, N.B., officially went on sale Monday morning.

Fans can purchase tickets at ticketmaster.ca for as low as $65 each plus fees.

The 2019 edition of Touchdown Atlantic will be played at the Stade Croix-Bleue Medavie Stadium, located on the grounds of Université de Moncton.

The Argos will host the Als in the first CFL regular season game down east since 2013, and the first presented by the Atlantic Schooners, who are working to become the CFL’s 10th team. 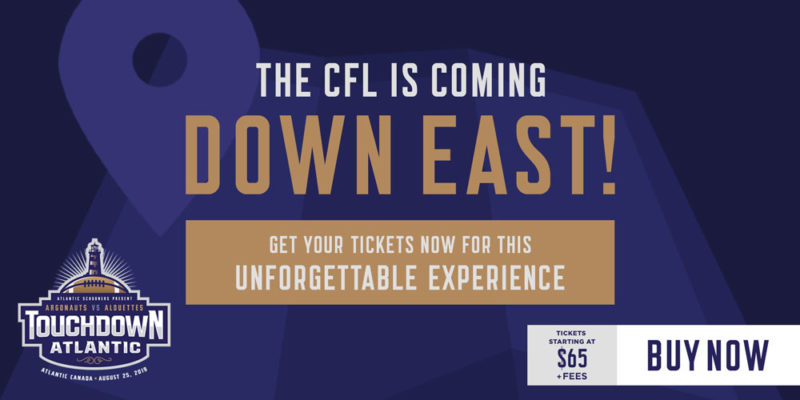 Fans are also invited to subscribe to the Schooners newsletter on the new Schooners.ca to receive all the latest information about the team and important reminders about the Touchdown Atlantic game. Fans can also follow the team on Twitter and Facebook.

“Canadian football belongs in Atlantic Canada,” said CFL Commissioner Randy Ambrosie at the end of March. “Anthony and his partners Bruce Bowser and Gary Drummond and their team are working hard to realize the dream of a 10th CFL team, and this Touchdown Atlantic game is an opportunity to share our unique, exciting game and our incredible athletes with fans in Atlantic Canada. I can’t wait for game day, and I know fans will have an amazing experience.”

“The Touchdown Atlantic series has inspired our young athletes, attracted visitors and generated major economic benefits for our communities, while also helping to establish Metro Moncton as one of Atlantic Canada’s leading destination for sports and entertainment,” said Ernie Steeves, New Brunswick’s Minister of Finance and MLA representing Moncton Northwest. “Our province is looking forward to host what will be another signature event that we can all be proud of.’’

“We are excited to be the host city of Touchdown Atlantic for the fourth time. We are pleased to welcome two teams, the Argonauts and the Alouettes, who have already experienced our legendary hospitality,” said Mayor Dawn Arnold. “Moncton showed it was a great football city in the past, and we are looking forward to again displaying our passion for the game in August. It’s going to be a great time.’’

The Argos played in the inaugural Touchdown Atlantic game in 2005. The preseason tilt, played in Halifax at Huskies Stadium, ended in a 16-16 tie against their long-time rivals, the Hamilton Tiger-Cats. Toronto was also part of the first of three regular season games played in Moncton in 2010, 2011 and 2013.

The Alouettes were the visitors in 2013 against the Tiger-Cats. Hamilton rallied for the comeback 28-26 victory by outscoring Montreal 15-7 in the fourth quarter in a game where fans saw a fake field goal pass for a touchdown and the pro debut of Truro, N.S. native Brett Lauther. The former Saint Mary’s Huskies kicker was perfect on four field goal attempts. Lauther is currently a member of the Saskatchewan Roughriders.