Friday’s Team East walkthrough didn’t take long; with rain coming down in sheets, Glen Constantin’s team moved like ghosts through the mist during a shortened workout.

The stands at Carleton University’s MNP Park — site of Saturday’s U SPORTS East-West Bowl (12:30 p.m. ET, U SPORTS live) — were empty, lest for a few hardy onlookers and a handful of people in the press box. 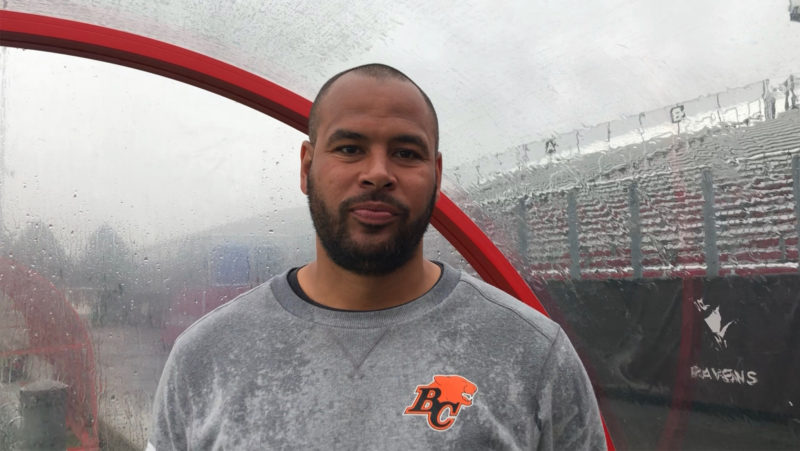 BC Lions D-Line coach Chris Ellis is enjoying his experience as a guest coach at the U SPORTS East-West Bowl. (Carlos Verde/CFL.ca photo)

Dutifully out on the field in team gear, however, were three familiar CFL faces: Chris Ellis and Keith Stokes of the BC Lions, and J.C. Sherritt — sporting new Stampeders threads after eight seasons playing for the green and gold in Edmonton.

As the players sprinted for cover at the end of practice, the trio hung around in a sideline dugout and reflected on their experience as guest coaches at the U SPORTS event.

“The energy’s been great from the start, (and) with a game like this you’ve got talent at every position,” said Sherritt, who was named Calgary’s linebackers coach in late January. “This has been a test run for me, in terms of coaching players as (we’re) getting ready for training camp.”

For Stokes, a two-time CFL All-Star with an impressive journey in football, the showcase event in Ottawa has been a chance to reconnect with familiar faces.

“It’s good, seeing so many guys I played with or against,” said Stokes, a special teams and offensive assistant on DeVone Claybrooks’ BC staff. “Some coaches too, and it’s been good to familiarize myself with some of the struggles they go through as coaches.

“There’s players out here with some serious talent, (and) we’ve got to find those hidden gems.”

Lions defensive line coach Chris Ellis — fresh off his first go-around with the CFL Draft — enjoyed his experience working with the class of 2020 in the nation’s capital.

🎥 | With an eye to the future, @BCLions D-Line coach Chris Ellis weighs in on @USPORTSca #EastWestBowl week.

“Besides the weather catching up with us later in the week, it’s been a good time, getting out with some of the D-line guys,” said Ellis while the rain continued to soak Carleton’s stadium, forcing Team West to move their walkthrough indoors. “I enjoyed the integrated practices, getting those guys to compete during the week.

“With this being my first draft year, I enjoyed the process of getting a look at these guys,” continued Ellis, who finished his playing career with Saskatchewan in 2012. “Taking this information into next year will be big (for us), along with following these kids into next year to see how they’ve developed.”

The weather is expected to improve ahead of Saturday’s kickoff; those in the national capital region can snag tickets here, while the game will be streamed online — Mark Lee and Justin Dunk will have the call — here.