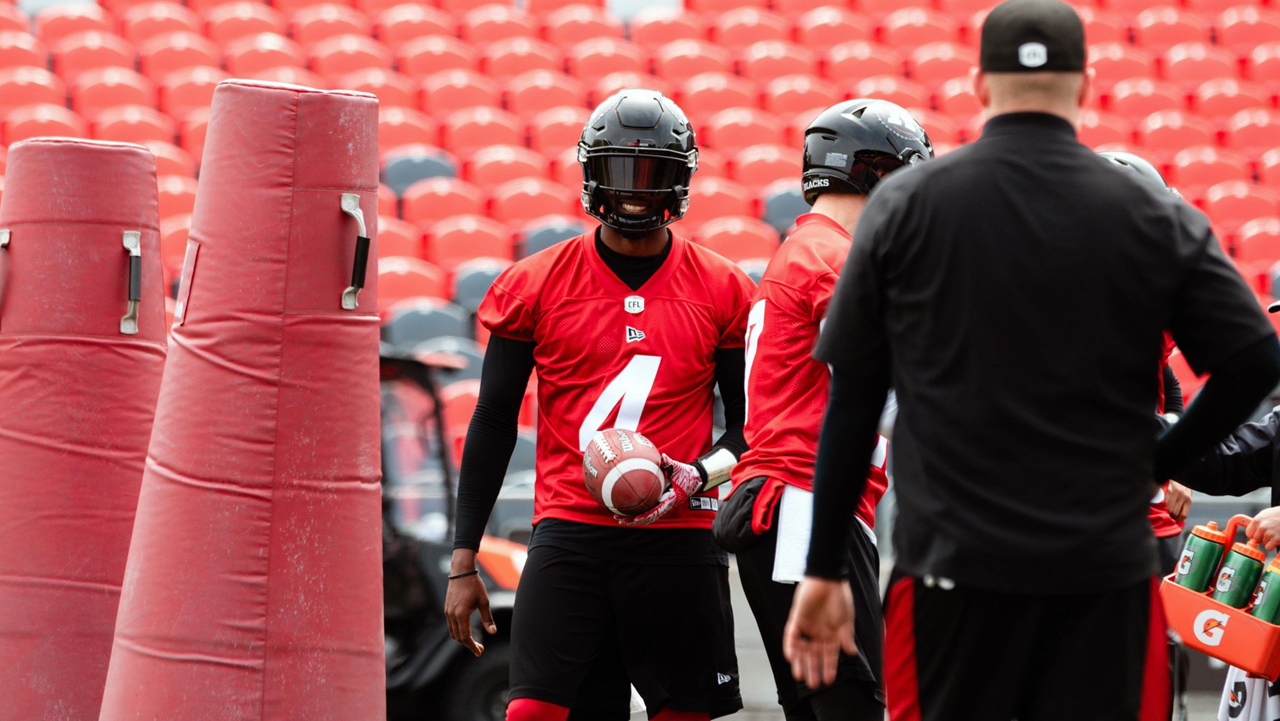 The 2019 off-season saw unprecedented levels of player movement as many teams will replace nearly half their starting lineups by the beginning of the season.

PLAY CFL FANTASY
» Five strategies for getting back on the fantasy horse
» Sign up and set your lineup for Week 1!
» How to build your best CFL Fantasy roster

While every season brings some level of unknowns with it, it’s essential for Fantasy players to get up to speed on the new faces in new places in the East before setting their lineups for Week 1.

Going into 2018, it seemed the Ticats had a stable full of strong receivers, but there were still questions about the abilities of Jeremiah Masoli to make use of them consistently. In his first season as the unquestioned starting QB in Hamilton, though, Masoli was the East nominee for MOP. As was the story in 2018 across the CFL, it was a revolving door at receiver for him due to injuries at the position, losing all of Williams, Saunders, and Banks for extended stretches in the season. Those injury woes have led the team to move on from Williams and Saunders, while Sinkfield, White, and Green were also allowed to move on.

All those vacated targets mean that the late season emergence of Bralon Addison should continue into 2019 as he, Banks, and Tasker should eat up the majority of the Hamilton targets in the passing game.

Hamilton will likely need to keep the ball in the air often as well given that much of their 8-10 regular season record relied on their offence outscoring opponents while their defence struggled to keep up, allowing well above average rates of both yards and touchdowns per play. The losses of East All-Stars Dean and Unamba certainly won’t help their cause. The Hamilton defence was a really volatile option in 2018 and is probably better suited to a “wait and see” approach to begin this season.

Cam Marshall was a somewhat surprising signing in free agency, but it makes a little more sense in hindsight after the release of Alex Green in May. Green had a nose for the end zone but had struggles with ball security and staying healthy. Marshall has seen his own issues with injuries but his late season contributions in Saskatchewan in 2018 apparently earned him another shot at playing time in 2019. The Tiger Cats showed a propensity to split the work in the backfield multiple ways throughout the season between as many as three or four backs on any given week. Marshall should have a shot at significant playing time, but he’ll likely split the workload with Thomas-Erlington or other new-comers Ray Lawry and Maleek Irons. Still, much of the Ticats fantasy contributors lie in the receiving corps where Banks, Tasker, and Addison should give defences fits while Mike Jones tears off the occasional 80-yard score.

The Hamilton defence really struggled to create sustained pressure on the QB in 2018, which led to them being a largely irrelevant Fantasy defence. The signing of Davis from Calgary should help with that, but one player can’t create a sustained pass rush on their own. If they are to become a reliable Fantasy option, the Hamilton defence will have to rely on some new faces to create sacks and turnovers.

Derel Walker was one of the league’s marquee free agent signings this off-season (Adam Kreuger/Argonauts.ca)

Both of the big-name losses for the Argos this off-season didn’t actually contribute much on the field in 2018. The mid-season trade of Carter from the Roughriders seemed to signal an opportunity to make use of his skills on offence again after falling out of favour in Saskatchewan, but Carter was rarely used as more than a decoy in his time as an Argo. That likely won’t be the case in his home in BC. Woods on the other hand was still a force to be reckoned with when he was on the field, but for the second straight season, injuries kept him from being much of a factor. The acquisition of Derel Walker will more than account for Carter’s departure, while Woods spot at LB has largely been filled for a couple years already.

The Argos’ biggest offensive star, James Wilder Jr., started a media frenzy of sorts back in March when he received a tryout with the WWE. That uncertainty may explain some of the reason behind the signings of Rainey and Sutton to a backfield that was already home to Wilder and last season’s late rising Fantasy star, Brandon Burks. It’s doubtful either Rainey or Sutton will eat into Wilder’s workload, but either of them could be cheap sources of value at the position if they get playing time due to injury.

The most important signing of the off-season for them was at receiver though as they reunited QB James Franklin with his favourite target from Edmonton, Derel Walker. Far too often last season, SJ Green received double-digit targets at age 33 while it seemed no one else in the receiving corps was able to be a credible threat. Walker should instantly free up space for Green to be the secondary threat while also opening lanes for the running game. Green will likely start the season overpriced based on his 2018 market share, but he could emerge as a solid value as the season goes once his price normalizes.

The 2018 version of the Argos’ defence was the matchup to pick on weekly with opposing offensive players as they allowed the most passing yards and passing touchdowns per attempt by a large margin. It’s hoped that the return of Lemon to the fold will spark the Toronto pass rush, which was worst in the league last season with only 24 sacks. The coverage prowess of Fogg and the versatility of Antigha should also help the defence overall, but given their previous track record, it would take a lot of improvement across the board before the Argos become a weekly Fantasy option on defence. 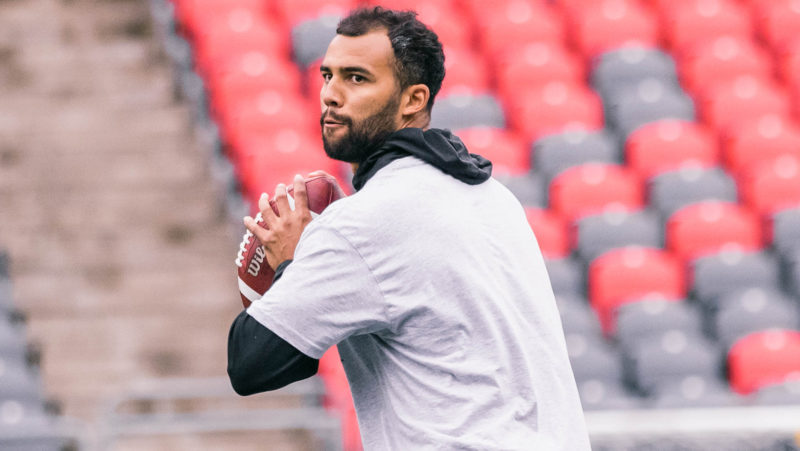 No team in recent memory took as much of a team beating as the REDBLACKS did this off-season, losing five All-Star level players on offence. It’s one thing when a franchise retools with other free agents like BC or Edmonton, but the replacements in Ottawa don’t have near the cache as the predecessors. Gone are 254 carries, 309 targets, 2,412 receiving yards, 1,363 rushing yards, over 5,000 yards passing and all those touchdowns along with them for an offence that already struggled with bogging down in the red zone – attempting a league high number of FGs inside 40 yards.

Added to that is the loss of East All-Star left tackle SirVincent Rogers to complete the decimation. Brad Sinopoli is the only major player left from one of the league’s most potent offences and he will be looking at targets from journeyman quarterbacks like Dominique Davis or Jonathon Jennings. Finally, the mind behind Ottawa’s potent offence, Jaime Elizondo, also left town in the off-season, making the transition period that much more difficult. All the departures certainly open up opportunities for new players to emerge at bargain bin prices to start the season, but it’s hard to envision the Ottawa offence having a lot of success early on to justify the risk.

The REDBLACKS’ reasonably solid defence remains largely intact outside of the return of AC Leonard to Saskatchewan, but they will have to step up their level of play immensely if Ottawa is going to contend for a return berth in the Grey Cup. These losses leave few exciting Fantasy prospects in the nation’s capital.

Jonathon Jennings and Caleb Holley cannot possibly replace the production of Trevor Harris, Greg Ellingson, Diontae Spencer, and William Powell. Both have shown flashes for brilliance in the past but never over a sustained period of time. Jennings struggled for much of the past two seasons in BC and clearly fell out of favour by season’s end. He’ll compete for the starting QB job with Dominique Davis, but neither are exciting Fantasy options to begin the season due to past inconsistency and a depleted receiving corps in Ottawa.

Caleb Holley will bring his downfield speed to the REDBLACKS offence, but injuries have derailed promising seasons for him in the past. Much of the team’s offensive hopes will fall on the shoulders of returning receivers Brad Sinopoli and RJ Harris as the rest of the starting roles will be decided in training camp, including who will start at RB for the departed William Powell. Whoever the starting RB winds up being, though, they shouldn’t be expected to get nearly the workload or production that Powell put up in 2018.

Their lone big name signing on defence was Chris Randle out of Winnipeg, who should help to provide some veteran leadership in the secondary for a defence that will have its work cut out for it this season. 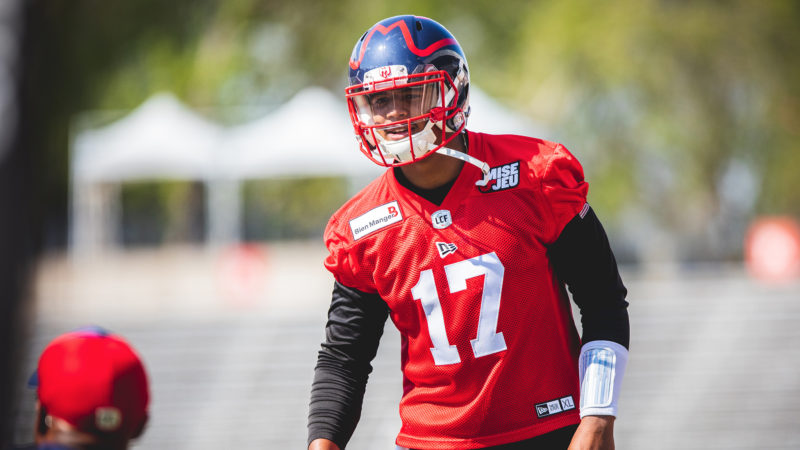 It was rather an odd off-season for Montreal, with the release of Johnny Manziel bringing an end to an era that had barely started. Quarterback remains the biggest unknown for the Alouettes in an offence that actually has a number of established pieces at other positions. Manziel’s departure opens the door for Antonio Pipkin to get another opportunity to start but he will compete with other returning veterans like Jeff Mathews, Vernon Adams Jr., and Matt Shiltz. Quebec native Hugo Richard is also on the roster but is a significant longshot to emerge as the starter. Ernest Jackson was another late departure, but his production had lagged since arriving in Montreal and it’s clear that they were willing to move on to younger options with more upside.

The arrival of DeVier Posey from BC should more than cover for the release of Jackson, as he will start opposite Geno Lewis – last season’s breakout star in the Als’ receiving corps. The other Als offensive player that burst on to the scene in late 2018 was RB William Stanback. Stanback averaged 6.8 yards per carry as a rusher and 8.1 yards per target as a receiver, making the signing of Johnson from BC somewhat surprising. At Johnson’s age, he’s likely there as depth rather than competition for the starting role. If Pipkin can learn to settle his feet and throw downfield rather than scrambling at the first sign of pressure, there’s hope that Posey and Lewis could bring some life back to the Als offence.

The Als defence on the other hand continued to struggle at multiple positions throughout the 2018 campaign and hopes to shore up the pass defence in particular with the additions of Loffler and Lokombo. Loffler’s hard-hitting ways earned him the nod as a CFL All-Star at safety while Lokombo was a reliable LB option in his first major season of action in BC. Both players will have to make a major impact to make the Als defence a viable Fantasy option in 2019.