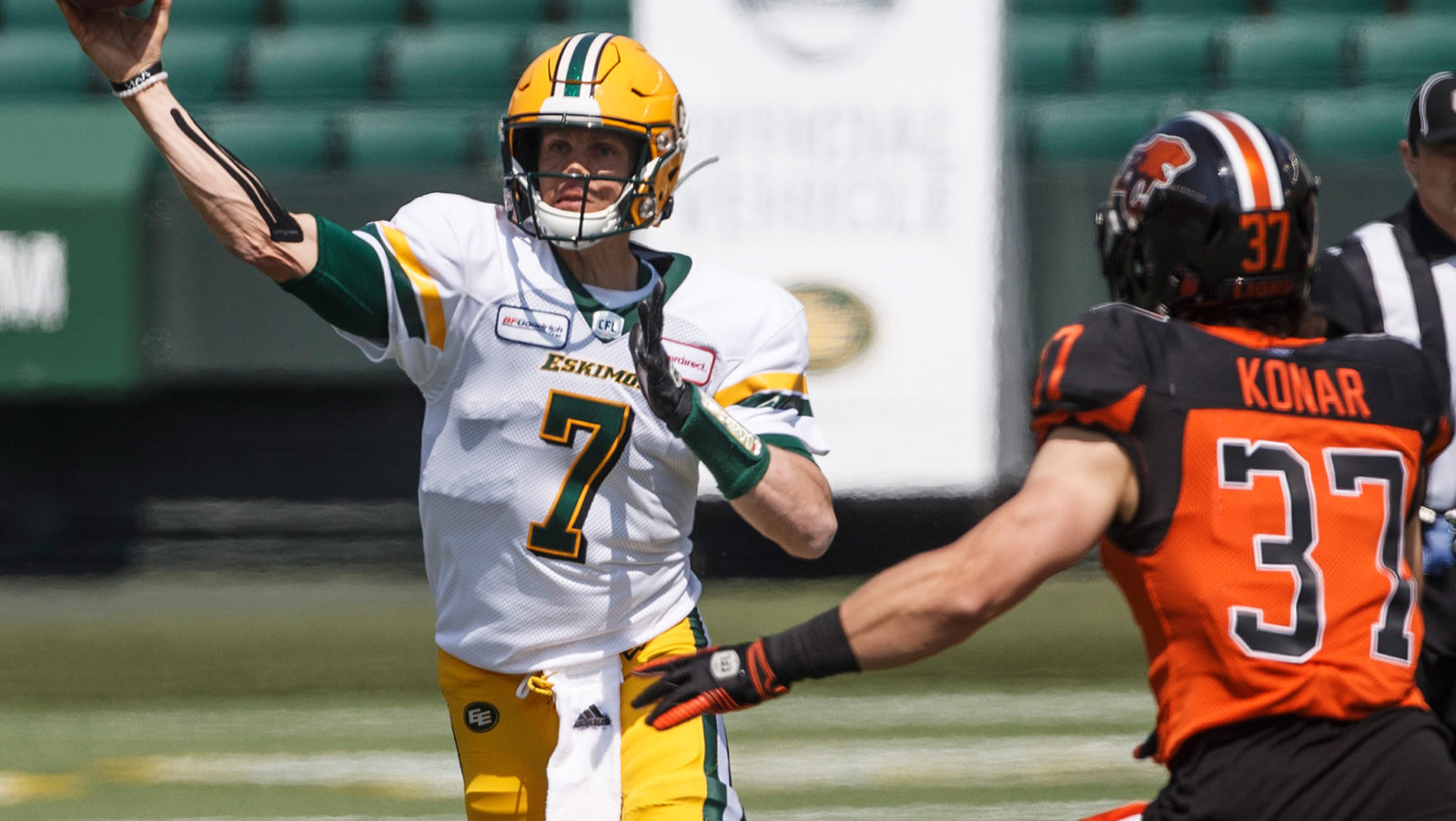 No longer living the Life of (Mike) Reilly, the Eskimos still have sufficient firepower to return to the post-season following a disappointing 9-9 campaign. Edmonton looked like a Western Final-calibre team at home, going 7-2 at The Brick Field at Commonwealth Stadium, but often looked like a bottom three franchise away from home as they sputtered to a 2-7 mark.

Not only did the Eskimos lose Reilly, the two-time All-CFL quarterback who accounted for 85 total touchdowns the past two seasons, the club lost All-Star receiver D’haquille Williams to the NFL’s Buffalo Bills and former All-Star Derel Walker to the Argonauts.

However, coach Jason Maas will have the former Ottawa pitch-and-catch duo of Trevor Harris and Greg Ellingson along with explosive boundary receiver DaVaris Daniels, who left the rival Stampeders. Running back C.J. Gable returns after recording his 1,000-yard season. It may take some time for the Eskimos to fit the pieces in place, but there will be more than enough on the buffet table for Fantasy users to dine upon.

Harris threw for a career-best 5,116 yards as he led the REDBLACKS to a Grey Cup Championship appearance. After throwing 30 touchdowns in 2017, Harris tossed just 22 touchdowns last season, but expect him to rebound with the amount of talent around him. He failed to throw for more than 250 yards only four times last year while also leading the league in completion percentage (70.1) and passing efficiency (99.6). However, Fantasy users will be wise to avoid him when he faces a Calgary defence that locked him up with a 1:6 TD:INT margin in three games (including the Grey Cup Championship) last season.

Unlike Reilly, who rushed for 25 touchdowns the past two years, Harris won’t provide much on the ground, having rushed for only three majors in his career with the last coming in 2016. That will cause some Fantasy users to shy away from him, but Harris’ ability to rack up passing yards should be able to offset his lack of running ability.

Danny O’Brien projects to be Harris’ backup. He threw only five passes last season but completed four of his attempts. Logan Kilgore and rookie Jeremiah Briscoe will clash for the third pivot, a role that could also include being the team’s short yardage quarterback.

For only the third time in his career, Gable played in at least 15 games and gave the Eskimos’ ground game a needed steady presence. Finally healthy, Gable rushed for a career-best 1,063 yards and seven touchdowns, averaging over five yards per carry for the fifth straight season. Although he recorded only a few 100-yard outings, Gable totaled at least 60 yards eight times on his way to finishing as the league’s third-leading rusher.

Gable will also help Fantasy users with his pass-catching ability, but his durability is a looming issue. In the two seasons following his playing double-digit games, Gable played in only 16 of 36 games. He will also be 32 by the end of the regular season, so while Gable will open as one of the best Fantasy options available, he may not end 2019 as such.

Shaq Cooper looked impressive in his CFL debut when he ran for 102 yards on 17 carries and caught five passes for 41 yards and a major but made one other appearance before ending the season on the practice roster. If Gable slows down, Cooper will be the back of choice while offering considerable Fantasy value. The team also thinks highly of second-year back Jordan Robinson, who averaged better than 15 yards per reception on the five passes he caught as a rookie.

The Eskimos lost a combined 2,444 receiving yards with the loss of Williams and Walker, but the addition of Ellingson and Daniels will help ease the pain. Ellingson made his third straight East All-Star team with 91 catches for 1,086 yards and five scores for Ottawa and will have no problem readjusting to his new environment with Harris at the controls. Although the scoring production was cut from 12 in 2017 to just five last season, Ellingson comes into the year seeking a fifth straight season of at least 1,000 yards and will improve upon last season’s 11.9 yards per catch. He’s definitely atop the second tier of Fantasy receivers and will remain a consistent source of production on a weekly basis.

Injuries have stalled Daniels from becoming a star, but his addition to the Eskimos will present him the opportunity of being a more featured receiver than he was in Calgary. Daniels has a career average of 16 yards per catch and has averaged a touchdown reception every seven catches, numbers that make him fit perfectly in Edmonton’s up-tempo attack. A healthy Daniels will be an upper tier Fantasy performer. 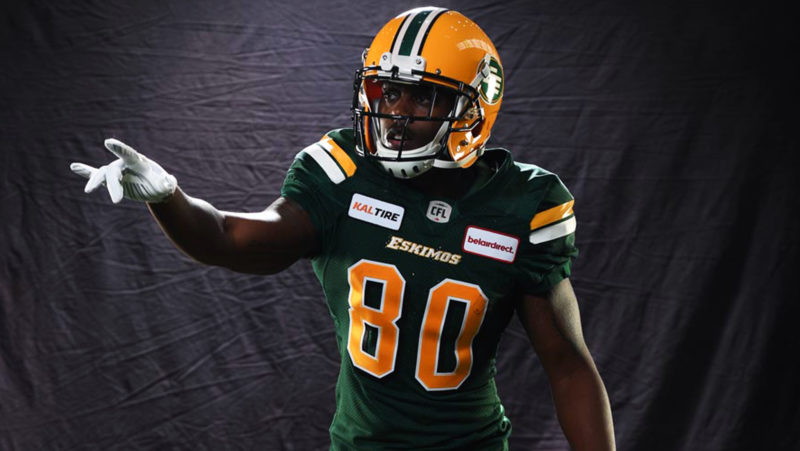 A new role and an injury-free season could pivot DaVaris Daniels to the CFL’s elite (Esks.com)

There is room for another receiver to emerge as a favorite target of Harris. Kenny Stafford is the team’s top returning receiver (55-781-2) who will remain a threat in the slot. Keep an eye on Tevaun Smith, the team’s first round pick in 2016 who will finally make his Edmonton debut after three seasons in the NFL. Torrance Gibson is a 6-foot-5, 225-pounder with near-freakish athletic ability who played quarterback at Mississippi Gulf Coast. With a size-speed ratio comparable to Williams, he will play his way into the rotation. Ricky Collins caught 60 passes for 611 yards and two scores with the Lions last season and adds a reliable pair of hands while former Ottawa receiver Joshua Stangby looks to reset his once-promising career after missing the entire 2018 season.

New coordinator Phillip Lolley will have to address a unit that tied for the most rushing majors allowed (20) and the second-worst yards per carry average (5.5). The Eskimos pass defence was susceptible to the big-play, giving up 37 passes completions of better than 30 yards despite leading the league in fewest pass attempts allowed (536).

The additions of Larry Dean and Jovan Santos-Knox at linebacker will greatly improve the run defence, while ends Alex Bazzie and Kwaku Boateng gives Edmonton a pass rushing presence that should help the unit approach last year’s total of 45 sacks. The team was sixth with 37 forced turnovers, a number that can be improved upon once the secondary finds balance. Anthony Orange, who had 54 tackles and five interceptions for the Lions last season, is the one sure thing in a defensive backfield that could see considerable turnover.