Can the Riders re-discover their offence? 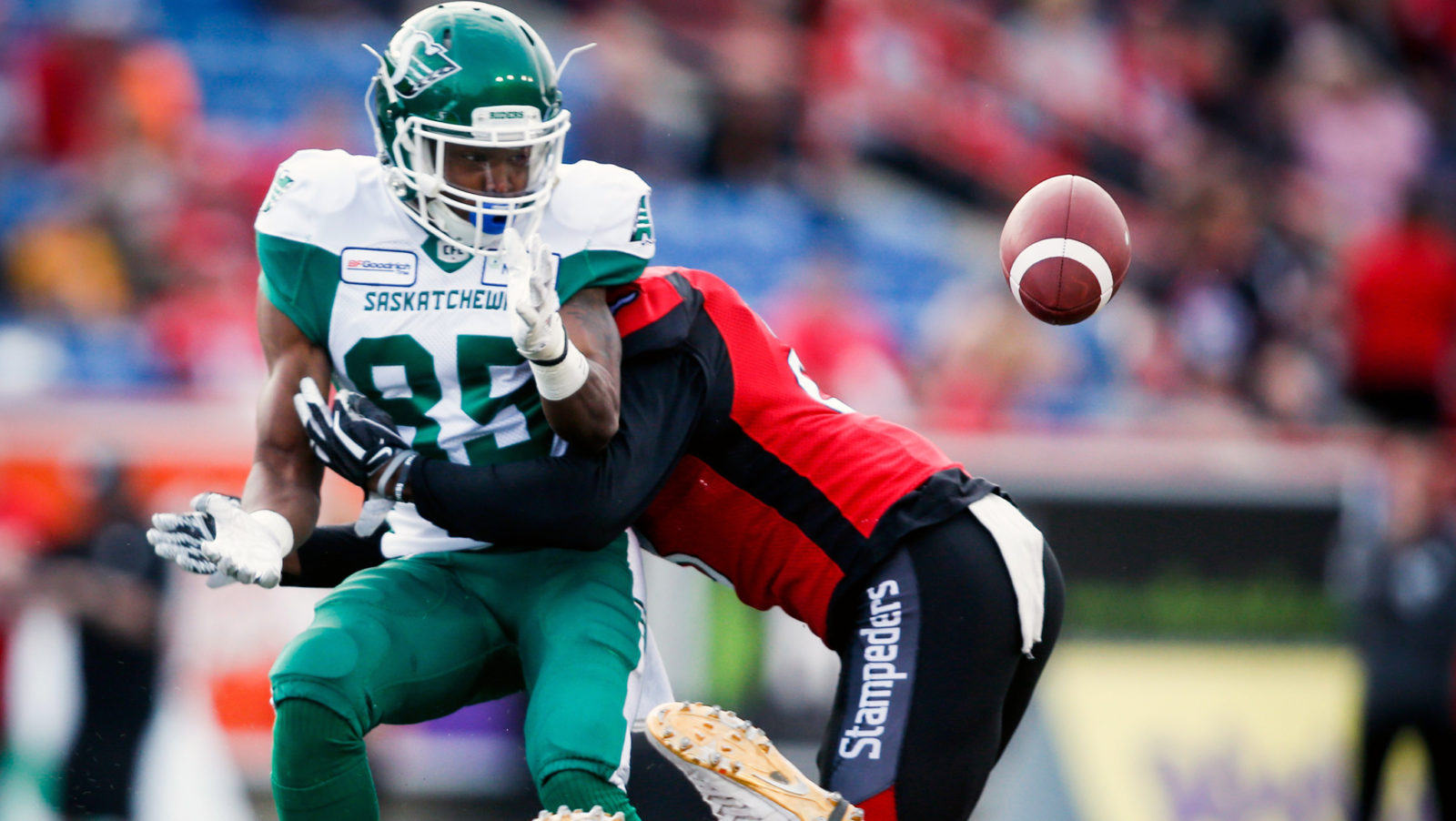 Can the Riders re-discover their offence?

Too often in 2018, the Roughriders’ offence played without the ‘O’. No one scored fewer offensive touchdowns than Saskatchewan (25), whose run to the playoffs was bolstered by the 15 touchdowns produced by the defence and special teams.

Although the Riders had the league’s second-best run game (111.9 yards per game), the struggles at quarterback led to only 220.9 yards per game and a league-low 22 completions of better than 30 yards. There is no question the unit must improve its passing attack. Translation: they’ll sink or swim with the play of Zach Collaros.

Excommunicated from Hamilton following the rise of Jeremiah Masoli, Collaros signed with the Roughriders and beat out Brandon Bridge for the starting role. Injuries caused him to miss a portion of the first half of the season; once he returned, Collaros had just one game in which he threw two touchdown passes and did not record his first 300-yard game until Week 16. Another injury closed out his 2018, forcing the Riders to start Bridge in their Western Semi-Final loss to the Blue Bombers. 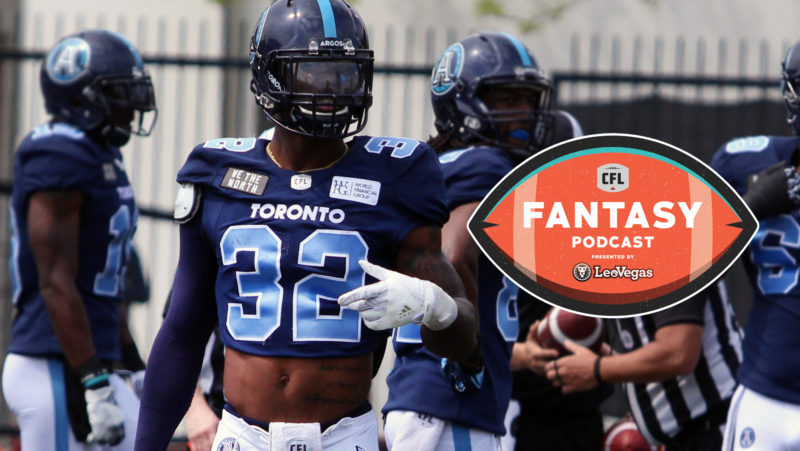 The Riders — and Fantasy users — are banking on Collaros looking more like the player he was in 2015 when he threw for 3,376 yards and 25 majors in just 12 games with the Tiger-Cats. The potential is there, but even if Collaros shows marked improvement, it’s not as if the Roughriders are going to become pass-happy. Among the projected Week 1 starters at pivot, Collaros comes into the season as the one with the least Fantasy value. A best case for him would be around 3,800 yards and 20 touchdown passes. However, Fantasy users should not count on Collaros as a running threat; after scoring seven times in 2013-14, Collaros has just one rushing major since then, with that coming in 2015.

The options are thin for Saskatchewan if Collaros goes down for an extended period. Cody Fajardo has scored 10 times over the past two seasons and projects to be the “Break Glass in Case of Emergency” option. Rookie Isaac Harker is more of a long-term project than short-term consideration.

New coach Craig Dickenson — who replaced Chris Jones over the winter — will keep the Riders run-oriented, especially after signing two-time 1,000-yard rusher William Powell from the REDBLACKS. Powell ran for 1,362 yards last season and led the league with six 100-yard games while finishing second to league rushing champion Andrew Harris with nine runs of better than 20 yards. Fantasy users (and Collaros) will also benefit from Powell’s work as a receiver as he caught 39 passes for 319 yards and two scores last year. While there might be some concern about Powell’s workload after he recorded a league-high 251 carries, the depth of the Riders’ backfield should ease that.

Marcus Thigpen will be a solid RB2 for Fantasy users as he will also serve as the Riders’ return specialist. Thigpen averaged a league-high 8.5 yards per carry on his 48 rushes (408 yards) and averaged nearly 10 yards per catch. He averaged 24.8 yards per kickoff return that included a 97-yard return for a major on his way toward finishing 15th in all-purpose yards. Kienan LaFrance returns to the roster after spending last season as a backup in Winnipeg, Injuries have kept LaFrance from realizing his potential. Rookie Jamal Morrow has intriguing ability; playing collegiately at Washington State, Morrow caught 202 passes for 1,748 and 14 touchdowns in his four years with the Cougars.

Despite the struggles of the passing game, the Roughriders unearthed a gem in rookie Jordan Lambert-Williams, who finished second on the team with 764 yards on 62 catches, but was signed by the NFL’s Chicago Bears. That puts the onus back upon Naaman Roosevelt because as much as the Riders need more production out of Collaros, they’ll need just as much from Roosevelt.

Injuries limited Roosevelt to 14 games, where he finished with 48 receptions for 570 yards and four touchdowns, a huge drop from the two previous seasons that saw him pull in a combined 151 receptions. He’ll be a risky pick for Fantasy users until he’s proven 2018 was just a blip on the radar. Shaq Evans had a solid debut season, catching 50 passes for a team-best 785 yards, yet did not score, a factor that drops him as a fringe Flex option. Don’t be shocked if Kyran Moore evolves into Saskatchewan’s best Fantasy receiver. Moore reeled in 32 passes for 475 yards and a score while also evolving into one of the league’s elite return specialists with a league-high 13.4 yard average on punt returns with two resulting in touchdowns. 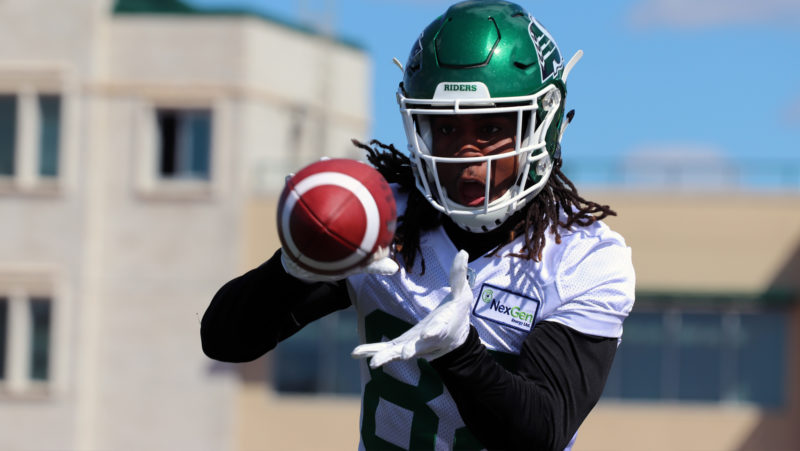 Veteran Naaman Roosevelt looks to put a forgettable 2018 season behind him (Riderville.com)

There’s promise in K.D. Cannon, who appeared in three regular season games. The former Baylor University wideout may be one of the fastest players in the league and could give Collaros a needed deep threat. The team used its first two picks in the draft on a pair of skyscrapers in 6-foot-6 Justin McInnis and 6-foot-5 Brayden Lenius. Both could eventually contribute as rookies.

The Roughriders added veteran depth in Emmanuel Arceneux and Cory Watson. Arceneux missed half the season but still displayed signs that the former All-Star can still deliver as he averaged 17.3 yards per catch. Watson caught 38 passes for the Lions last season and will also help as a mentor to the younger receivers.

Jason Shivers makes his debut as a defensive coordinator, overseeing a unit that led the league in fewest yards allowed (317.5 yards per game) and tied for the lead with 45 sacks. The Riders had the stingiest pass defence (245.8 yards per game) and were second only to the Stampeders in rushing yards allowed (91.9 yards per game). Although the D lost elite pass rusher Willie Jefferson (Winnipeg), the unit brought in defensive tackle Micah Johnson and linebacker Solomon Elimimian to go along with potential superstar corner Nick Marshall, All-Star halfback Ed Gainey and ageless defensive end Charleston Hughes (15 sacks).

Don’t expect much drop from this defence. While they may not find the end zone at the pace they did in 2018, they’ll remain the go-to D for Fantasy users.