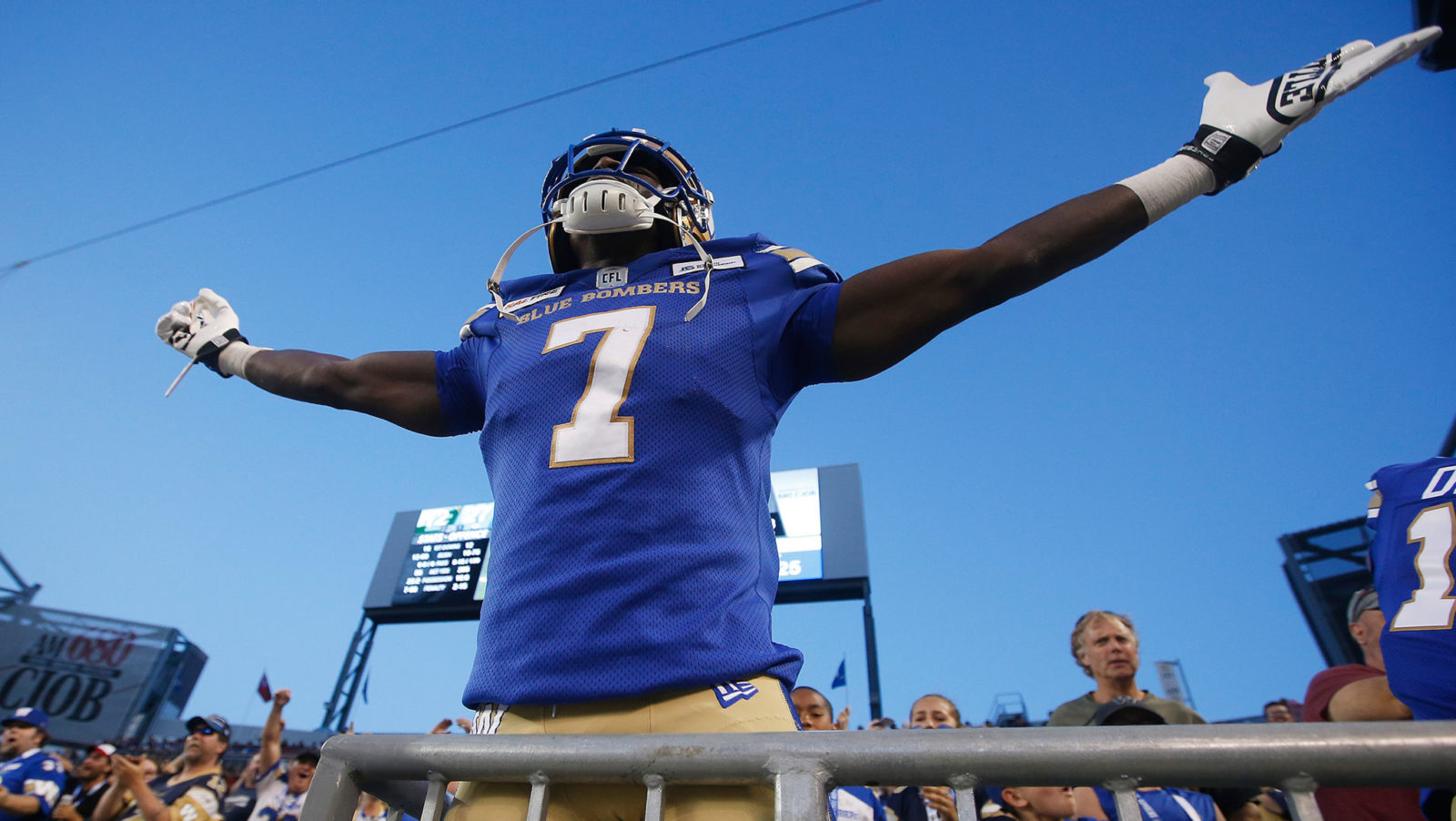 Hello, CFL place kickers. Nice weekend. Sean Whyte, known for a love of curling as well as his booting abilities, came soooo close to an eight-ender in that game against Winnipeg. And you, Rene Paredes. I had some delicious, delicious Canada Day meals but that onside kick of yours was tastiest morsel of the entire long weekend.

JUST GET THE BALL TO LUCKY

Favourite image from Week 3? Winnipeg quarterback Matt Nichols looking over to his team’s sideline after receiver Lucky Whitehead had just taken a swing pass at the Edmonton 44-yard line and turned it into a major.

Nichols was smiling and he just kept shrugging as if to say “I don’t know… guy does his thing, is all. Tee-hee-hee.”

Whitehead got fine seal blocks off the top from Chris Matthews and Drew Wolitarsky to set things in motion but after that it was all Rodney Darnell as the first-year Bomber flicked the toggle on some nitrous oxide boost and blurred his way to the end zone, with a “now you see me, now you don’t” shift thrown in for fun and artistic merit.

Nichols’ reaction kind of said it all. Don’t question the talents, don’t try to figure it out.

There’ve been some great, dependable credos over the years like “those who dare to fail miserably can achieve greatly.” Or “We have nothing to fear but fear itself.” Or “there’s always money in the banana stand.”

The Winnipeg Blue Bombers have one of their own now: Just get the ball to Lucky.

THE BC LIONS ARE ON THE RIGHT TRACK

Is there room for solace in football? Can a team see a late and large lead crumple into an incredible loss and still come away with something good out of that frustration?

A little bit, I think.

The BC Lions did suffer a sobering come-from-ahead loss to the Calgary Stampeders on Saturday night and in the end, it’s a loss and an oh and three start.

Before the pillars gave way and the temple came crashing down around them, though, they were writing the best script of their young season, turning in a very good effort after two sub-par drafts to begin the year.

After two weeks of offensive sputtering and pass protection leakage, the Lions fashioned a much better outing by balancing the attack and keeping quarterback Mike Reilly – for the most part – much less bothered than he had been.

Handing it off to John White worked well and finding him in space for short passes worked even better. Nik Lewis is the BC Running Backs Coach so I wouldn’t be surprised if he insisted that the best way to employ said running backs would be as short range pass catchers.

Long story short, the Lions blew it in Calgary. Short story long, a devastating loss has plenty of positives on which to build. 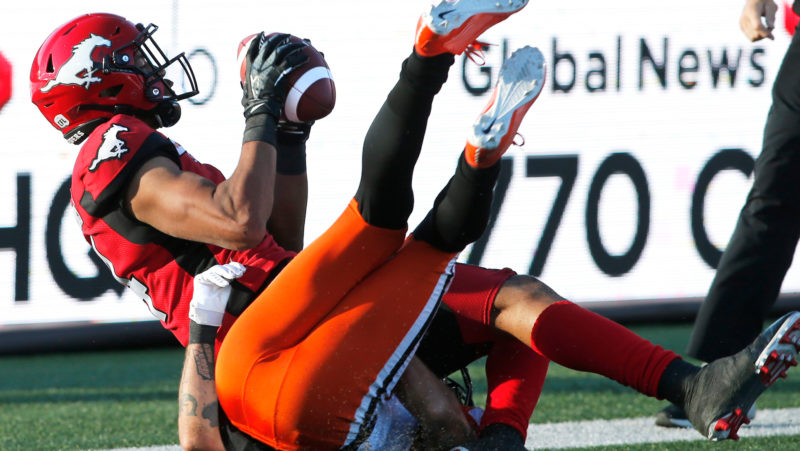 Eric Rogers had three touchdowns in his team’s win over BC this weekend (Larry MacDougal/CFL.ca)

Eric Rogers is all the way back. Calgary’s sublime pass-catcher has had a bunch of injuries to deal with over the last few years, including a devastating knee injury suffered while he was trying out for the San Francisco 49ers in 2016. That ended his season and when he returned to Calgary nearly a year after surgery, the knee was still problematic, needing more surgery and forcing him to miss some time mid-season.

He injured the knee again during the playoffs and was even looking at retirement during the off-season.

Instead, he rehabbed again and added conditioning that would strengthen his quads, hoping strength there would give his hinges a break.

With three touchdown catches against BC and a total of nine grabs for 100 yards, Rogers really looked like his old self again. Smooth, shifty, explosive and dominating.

And judging by Saturday night’s effort, he will own defensive backs over the middle.

BONUS TAKEAWAY: Nick Arbuckle is the guy sitting quietly in the corner for almost the entire karaoke night, then gets up and crushes Aerosmith’s “Dream On,” at last call.

THAT’S A NO FROM HIM. A HARD NO

Probably the greatest sequence by an individual in the entirety of Week 3 came from Montreal Alouettes’ middle linebacker Henoc Muamba. I’m quite certain he must have been uttering the phrase “I am a servant of the Secret Fire, wielder of the flame of Anor,” over and over again as he readied to stuff Hamilton quarterback Dane Evans on third and goal from the one. Not once. Not twice. But thrice, consecutively.

On the third try, he even knocked the ball out of Evans’ hands for good measure.

“You shall not not pass,” Muamba bellowed each time, at least in my mind. “But, also – and more importantly – you shall not rush!”

Dane Evans: Phil Connors, before Phil figured out he could avoid stepping into that puddle of ice water after blowing off Ned Ryerson.

THERE IS MUCH BAILING TO BE DONE

We wondered after the first game; Could the Argos really be that far off the mark?

Message received, Monday, in Regina. Yes, they could.

After they were trounced in their home opener by the Hamilton Ticats, Toronto needed a bounce back game against the Roughriders to prove that the first game of the season was a peyote-induced fever dream.

They didn’t get it, with their defence being torched by the league’s newest long bomb arsonist, Cody Fajardo.

Game two in Toronto’s season did not provide the great leap forward that Argos’ fans were looking for.

A busy off-season, dotted with notable signings and the return of Corey Chamblin to the coaching ranks and a promise to turn the offence loose brought great anticipation to Toronto ahead of the 2019 campaign, with hopes for a jack rabbit start.

A quick turnaround is not to be in the offing, however, reminding everyone that a successful winter is one thing; but that the really hard work comes when the official’s game flag drops.

You WILL be sacked by someone on the Ticats’ front four some time this summer. At the grocery store, while you’re gardening, or while in line at a cafe, waiting to order. You WILL be sacked. They’ll get to you.