A passionate fan of football, her dreams of playing were halted prior to three years ago, as there was concern from her family about competing against boys, along with the fact that there was no Manitoba Girls Football Association (MGFA) team in her area.

The MGFA is a six-a-side league for junior and senior females that’s played in the spring. The league allows girls to learn the game, hone their skills and compete against each other, and if they so choose, compete in youth leagues in the fall. 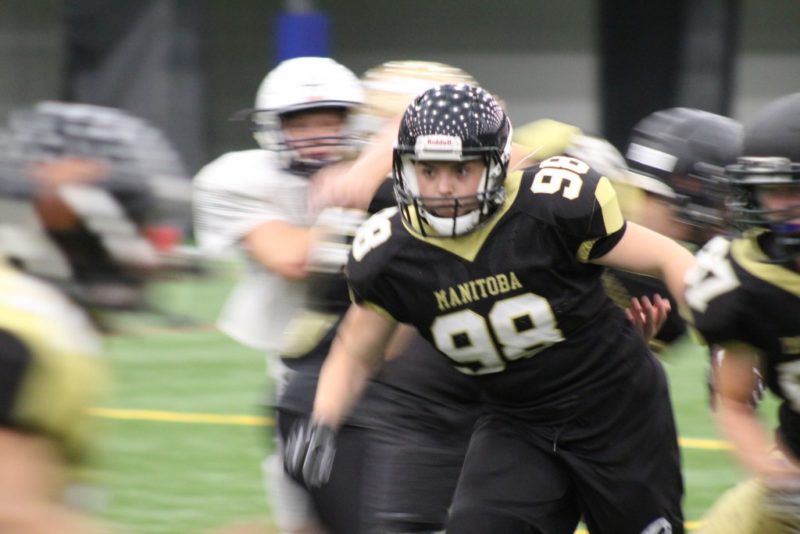 Jonasson was a natural from the start. Named a team captain as a defensive back, she rightfully earned a spot as an MGFA all-star early in her career.

“It was a big stepping point for me going into a sport that I’d never played before and being such a role model to the other girls that are new to the sport too.”

Always striving to get better, Jonasson also played bantam football against boys, having a blast while doing so. It was there that she was shifted to linebacker, a position she “fell in love with” and still plays now.

“I like being in every play. I like watching how the offensive line moves so that you can see every play is going to go. And I like how much knowledge you have to have to play the position.”

Last year, the Transcona native took an even bigger step in her growth as a football player, trying out for Team Manitoba’s U16 squad. She made it to phase two but was ultimately not selected to the roster.

Instead of getting down on herself, Jonasson took the experience and grew from it.

“After last year being unsuccessful after phase two, it was a big realization for me that you have to go 100 percent every rep and you can’t just give up.”

This year, Jonasson was back for U16 tryouts, dedicated to doing whatever it took to become the first-ever female to make the squad.

Jonasson did just that, and made sure to remind her head coach of what she’d said to him during prep camp.

“When [Ready] called me and told me I made the team, I’m like, I told you. I told you in prep camp I’d make this team. It was pretty nice going all the way and being the first female.”

Jonasson and her squad are currently in Kamloops getting set for their first game of the U16 Western Challenge later today. The linebacker is excited for the experience, which she feels will prepare her well for her debut season in the Winnipeg High School Football League (WHSFL) this fall with Murdoch MacKay — an incoming Division 1 team.

She won’t be alone however, as a growing number of females have begun plying their trade in the WHSFL, with over ten suiting up for various schools in 2018.

“After I made [Team Manitoba] it kind of opened my eyes more to high school football,” Jonasson says. “I thought if I could play Team Manitoba, then I can play high school.”

Her message to any female looking to make their mark in the sport is simple.

“Go in there like you’re one of the boys and give it 100 percent because you never know who it watching you. You can be as good as you think you are.”