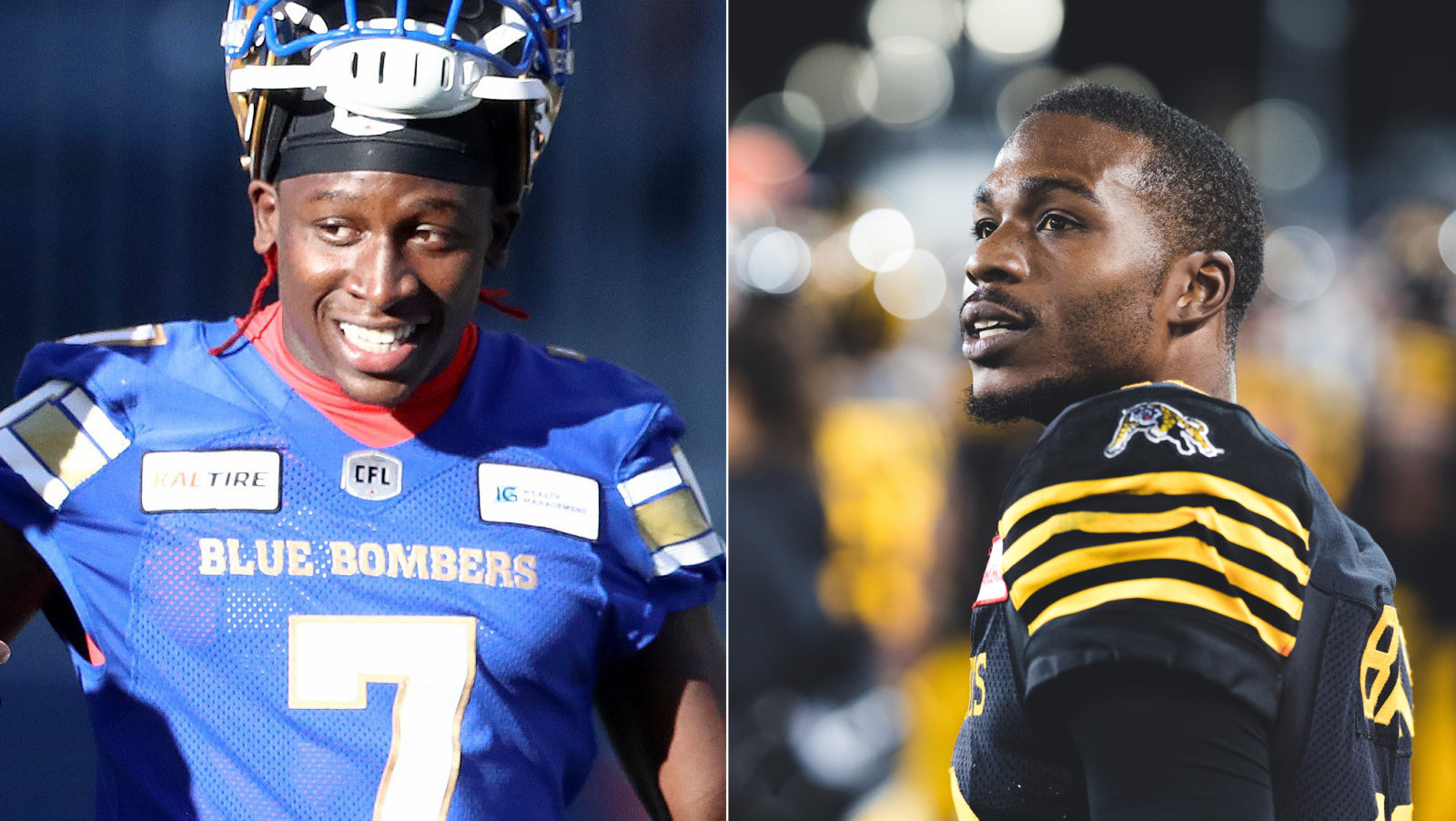 It sounds like something you might see on the cover of a comic book, or maybe an old school boxing card.

Speedy versus Lucky. One night only. Hamilton.

Both have shown themselves to be unstoppable forces on the field this year and key components of their teams’ early successes.

In his first season in the CFL, Whitehead leads the Bombers in receiving, with 267 yards and two touchdowns. He’s handled five kickoff returns, taking one of them 104 yards for a game-opening touchdown run in Week 5 against Toronto.

In his seventh season in the CFL, Banks has reaffirmed his status as the league’s ultimate return threat, taking two missed field goals in for touchdowns this season. The 31-year-old has blossomed as a receiver and leads the league in receiving yards (506) and has caught three touchdown passes.

They won’t go up against each other of course, but it’s the kind of match up that will feel like something big is about to happen on every kickoff and punt when the Bombers put their 5-0 record on the line against 4-1 Hamilton on Friday night.

“There are a lot of similarities between the two teams,” Ticats special teams coordinator Jeff Reinebold said.

“They have dynamic returners on both sides. Lucky Whitehead has proven himself at the highest level in the NFL. He had a 102-yard touchdown return there and Speedy, he did the same thing when he was with the Redskins. Interestingly enough, both guys have played in the NFC East.”

Reinebold and Banks aren’t that different from the rest of us in that they’ve just enjoyed watching Whitehead play. Banks will cross his fingers and hope for an off-game from Whitehead on Friday, but wished him success the rest of this season.

“It’s great for the CFL, him coming in and putting some more excitement into the game. I love watching him. He’s going to be pretty good,” Banks said.

“Like me, he plays with an edge. He wants the ball and he wants to score. I like guys like that, that want the ball in their hands every play and want to score touchdowns.”

Seven years in, the Ticats won’t be able to surprise an opponent with Banks.

“They’ve used him in certain situations and he’s he’s made good on it but historically what he’s done in this league, he’s put points on the board.

“It’s a tough match up. Our guys are certainly aware of if he’s out there, you know what he brings. Frankie Williams also. When Frankie’s out there he’s fast too, he’s put up some good numbers too. They’ve got a good special teams unit. They’ve got very good returners, so our guys will have their work cut out for them.”

Whether it’s Speedy versus Lucky, or Jeremiah Masoli versus Matt Nichols, it’s easy to get sucked into the individual pairings in these games. Reinebold will look out at Tim Horton’s Field on Friday night and see a lot more wrinkles to this game than just those ones.

There’s the kicker/punter match up between Winnipeg’s Justin Medlock and Hamilton’s Lirim Hajrullahu, who have played for both the Bombers and Ticats in their careers, giving them equal knowledge of a windy stadium. There’s Mike Miller, the Bombers vet that contributes on special teams the way that O’Shea did as a player.

There’s Bombers’ special teams coordinator Paul Boudreau, whom Reinebold remembers seeing as an infant, back when Paul Boudreau Sr. was one of his college coaches at the University of Maine. Paul Sr. built a near 30-year career as an o-line coach in the NFL, NCAA and CFL. Reinebold said part of Paul Jr.’s creativity as a coordinator comes from his football roots and the time he spent working under L.A. Rams’ special teams coordinator John Fassel.

“(The Bombers) do an awful lot of things, some really interesting stuff. They challenge you in every way,” Reinebold said.

“Then on top of it you have (O’Shea), who from the time he came into this league as a player has taken great pride not only in his personal performance as a special teams player, but then when he went to Toronto and coordinated the teams there, they were always outstanding. You knew that they were going to be extremely well-prepared and they were multiple and they were going to do things to stress you and make you work. From that standpoint, it’s the kind of game you love to coach in.”

To the majority who view special teams, it looks chaotic. The ball hanging in the air, falling into the returners’ hands and in front of them, dozens of bodies at battle. Reinebold admitted that it takes courage to catch that ball, look up the field and throw yourself into the fray. He sees that in both Speedy and Lucky. 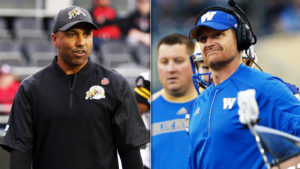 They won a pair of Grey Cups as players and assistants in Toronto and now Mike O’Shea and Orlondo Steinauer take their division leading squads into a critical Week 7 matchup against one another … READ MORE,

“That takes time to build. That doesn’t come overnight.”

That process is in the earliest of stages for Whitehead and the Bombers. Reinebold has been on hand to see most of Banks’ development, from an electric returner into one of the league’s top receivers and someone that over the last two years has deserved to have his name in the MOP discussion.

“He’s grown so much as a person in the time he’s been here and as a teammate and as a leader,” Reinebold said.

“He went from being the guy that was disappointed that he wasn’t in the NFL and felt like he should have been there to now being a guy that’s become a real leader on our football team.

“I think June (Jones) did a great job of recognizing…for a long time, (Banks) didn’t play receiver. June saw greatness in him.

“Then Orlondo (Steinauer)…has made it clear that he’s got to be a feature of what we do. He’s a great player and we’ve got to get great players the ball.”