The Calgary Stampeders have added a new receiver — or retriever — to their roster.

The team announced on Sunday that it will be fostering a puppy from Cochrane Humane Society that will be available for adoption in a few short months. However, the Stamps needed help with a name, so they enlisted some of their players to aid them.

We’re fostering a puppy from the @CochraneHumane with the help of @KendraWatt, but we still need a name…

So we enlisted the help of our players! Take a look! pic.twitter.com/PBOX6DTVUM

While holding the K-9 in his arms, backup quarterback Nick Arbuckle went with a pun, suggesting that the Stamps go with “Arfbuckle.”

“I would name him Rocky,” receiver Eric Rogers said. “He’s got a little fight to him and he can catch the ball, catch the rock. So his name is Rocky.”

Punter Rob Maver also decided to offer up his position as a name suggestion.

“I think it works. Punters are the best and sometimes they throw the ball. I think it’s a home run.”

Linebacker Wynton McManis said that the dog should either be named “Hershey” or “Cutie,” but in the end, 2018 CFL Most Outstanding Player and Grey Cup MVP Bo Levi Mitchell got the last say.

Lo and behold, the first time the quarterback called the dog by that name, it immediately looked up to him. 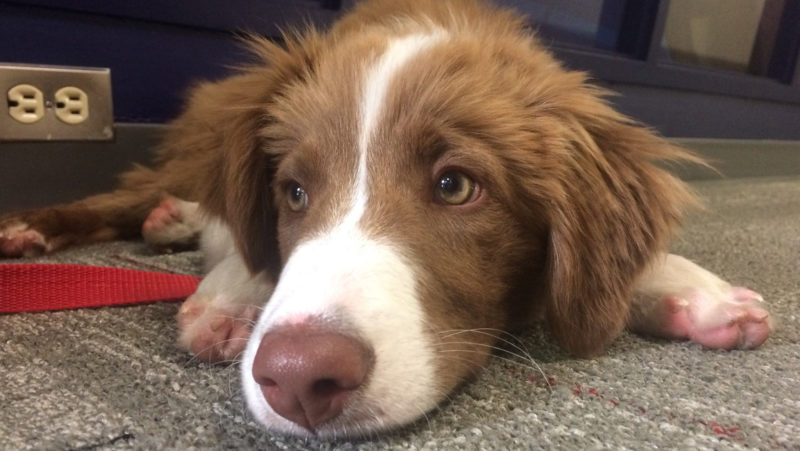 The trend of puppies being adopted or fostered by professional organizations started in the National Hockey League, where a handful of teams brought in a doggo to help boost morale and help the pooch get adopted. A few were training to be guide dogs and spent time around the team before going to their trainer.

QB will stick with the Stampeders until the conclusion of the 2019 season. He’ll then have the chance to find a forever home. The Stamps are hoping he’ll be a good omen in their journey to defend their Grey Cup title.