The Weekly Say: Playoffs?! Are the Argos ‘in the race’? 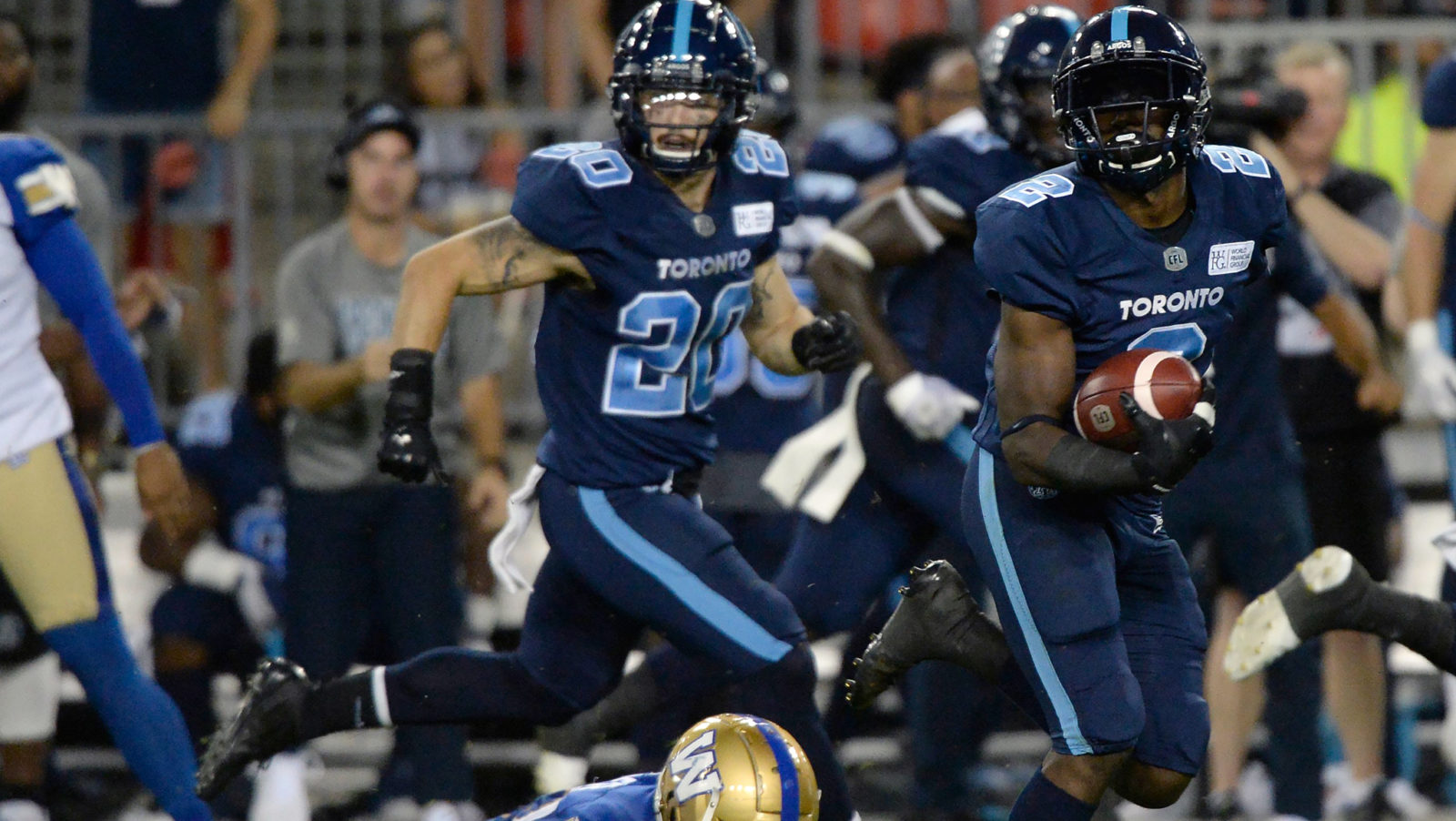 The Weekly Say: Playoffs?! Are the Argos ‘in the race’?

TORONTO — We’ve all heard the quote before.

“Playoffs?” Jim Mora, coach of the NFL’s Indianapolis Colts, famously exclaimed back in 2001. “Don’t talk about playoffs. Playoffs? You kidding me? Playoffs? I just hope we can win a game!”

After a stunning last-minute win over the league-leading Winnipeg Blue Bombers two weeks ago, the Toronto Argonauts have indeed won a game in the 2019 CFL season. Yet despite their 1-6 start, the Argos find themselves in the running not only to participate in the post-season, but to potentially even host a game at BMO Field.

Despite sitting just two games out of second place in the East, many still view Toronto as a long-shot to turn its season around and book a ticket to the playoffs come November. Yet the Argos showed glimpses of hope last time on the field, erasing a 20-point deficit to hand the Bombers a second consecutive loss.

The debate is on in The Weekly Say.

Just two games back of second, can the Argos contend for a playoff spot? 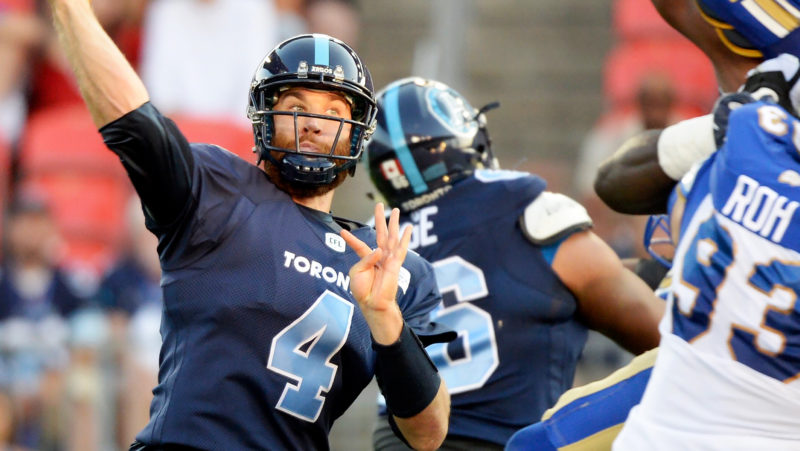 Don Landry: They can. The Toronto defence has been quietly getting better and better over the last few weeks, and that’s despite a number of injuries creeping in to remove starters (the news this week that defensive tackle Cleyon Laing is now out is a big blow). Can they move the ball on a consistent basis on offence? That’s the big key for Toronto. If they look like they did against Winnipeg, and with tons of games against Montreal (twice), and Ottawa (three times) left to go, the Argos could make a move towards that second berth.

Brodie Lawson: I think so. There is still so much football left to play and the East continues to be a little shaky and a little unpredictable. Mark’s Labour Day Weekend has always signaled the unofficial road to the playoffs, so if they can play well and get a few lucky breaks they can certainly contend for a playoff spot. Contend for a playoff spot and a playoff team though – those in my opinion are two different things.

Jim Morris: Looking at the Argos’ schedule I would say no. Their next really “winnable” game is Week 17 against the Lions, at BC Place, which far from a gimme.

Fan Poll
Can the Argos contend for a playoff spot in 2019?
Yes
Vote
No
Vote
Submit View Poll Results 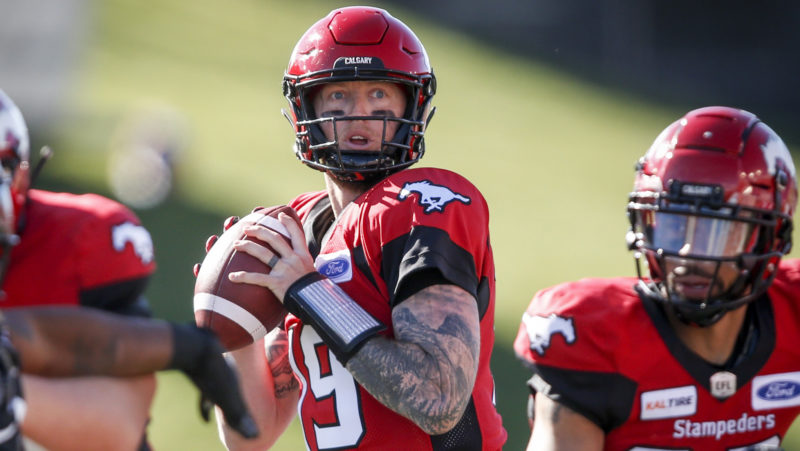 Injured starter Bo Levi Mitchell is hoping to return to the lineup this week vs. Montreal (The Canadian Press)

Ferguson: Bo with a fresh mid-season body ready to make a run? Terrifying.

Landry: No, not the favourite. In a group of contenders, yes. The reigning MOP has returned to a team that did more than weather the storm in his absence, with confidence sky high. And the defence has played tremendously well, likely to get even better. I do, however, fully expect the Winnipeg Blue Bombers to press the issue and Edmonton’s top-ranked defence puts them in the equation as well. And what about Hamilton and Sasky? The Stamps aren’t slam-dunk better than any of these teams. Gonna be a great second half of the season.

Lawson: I don’t think so but that really isn’t a comment on Bo Levi Mitchell as much as it is a belief that there is more to a team that just one (yes, exceptional) star player. The Stampeders have had good production from Arbuckle so it’s not as though the lack of Bo has left them falling apart. Will adding but Bo back in automatically bump them ahead of other teams as we ENTER Week 10? I don’t think so, I think we need to literally see it play out for a couple weeks before we make a call.

Morris: No. Even before Mitchell was hurt the Stampeders didn’t seem to be hitting on all cylinders. Right now, any team in the West other than BC could be Grey Cup contenders.

Is Brandon Banks leading the early Most Outstanding Player race? 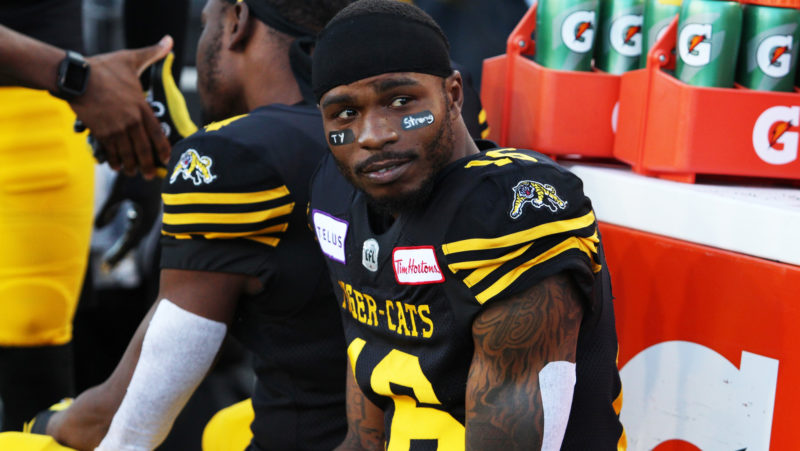 Brandon Banks has been one of the CFL’s top standouts through nine weeks (Shannon Vizniowski/CFL.ca)

Ferguson: Has anyone else done more OUTSTANDING things in 2019? Andrew Harris is great, but this is a lock right now.

Morris: Right now, yes. He does have the most eye-popping stats, but other players are also performing well. Trevor Harris is the leading quarterback in the league, Andrew Harris the top rusher, Lewis Ward is an almost unheard of 21 for 21 on field goals and Charleston Hughes is leading the league in sacks.

Lawson: He’s $14,000 on TSN CFL Fantasy Football…and he’s (obviously) not a quarterback. On this alone, I say yes.

Landry: Winnipeg’s Andrew Harris is the leader. 746 yards rushing already (6.5 yard average). Another 322 receiving. Four 100-yard rushing games. More than 50 per cent of his team’s offence. In a standout career, has he ever been better than this?