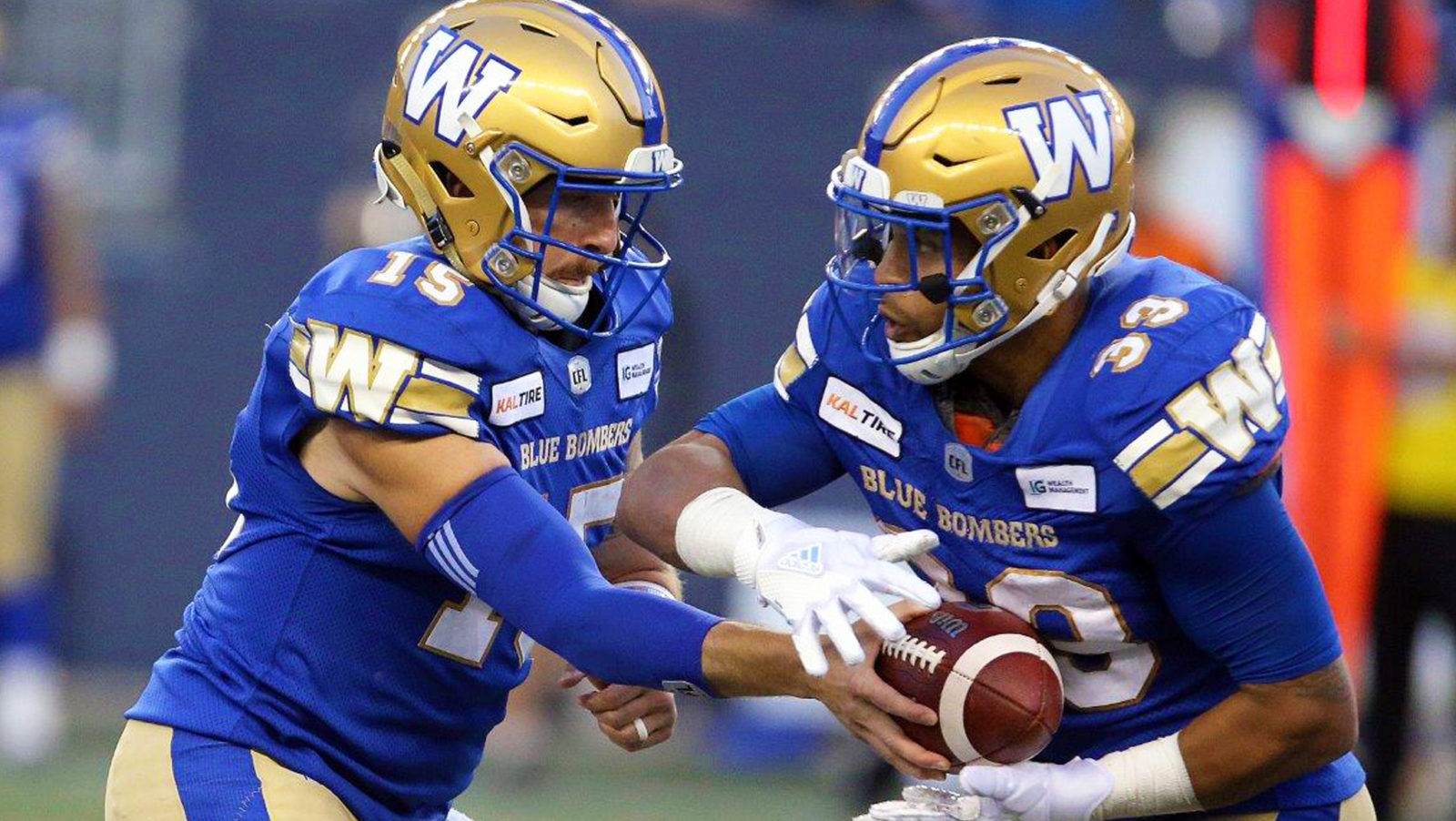 WINNIPEG — Andrew Harris set a major milestone in the Winnipeg Blue Bombers’ 32-16 victory over the BC Lions on Thursday night.

Harris finished with over 70 yards on the ground, which helped him set the all-time record for yards gained from scrimmage by a Canadian.

Bombers quarterback Matt Nichols went 10 of 12 for 179 yards and a touchdown, but he was forced to leave the game in the fourth quarter with an upper-body injury.

Mike Reilly went 16-for-26 for 177 yards in the loss. Receiver Duron Carter also had a 56-yard completion to Lemar Durant in the third quarter.

The Winnipeg defence got to Reilly seven times on the night and added an interception and three forced fumbles. Marcus Sayles also had a blocked punt touchdown on special teams.

RELATED
» Harris becomes all-time Canadian leader in yards from scrimmage
» Bombers succeed in all three phases in victory over Lions
» Watch: Bombers score on opening drive
» By the Numbers: View Boxscore
» Images: BC at Winnipeg

BC would immediately concede great field position to the Bombers, as an attempt to keep the ball away from Janarion Grant off the opening kick-off would set up Winnipeg on their own 44. A 20-yard clipping penalty on Garry Peters and a pair of scampers by Harris totalling 14 yards got Matt Nichols into prime position. He’d take care of the rest, unleashing a strike to the back of the end zone to hit Nic Demski in stride. Justin Medlock would stick the extra point to give the hosts an early 7-0 lead.

Nichols would continue to fire, hitting Chris Matthews with a bomb over the middle for a gain of 51 yards. After a gain of three on a pass to Lucky Whitehead, the pivot would take a shot at Kenny Lawler in the end zone. However, the pass over the middle would catch the upright, forcing the kicking team onto the field. Medlock would calmly run out and hit a 25-yarder to push the Bomber lead to 10.

The Lions’ offensive line continued to struggle in the early goings of the game, as the Bombers were able to get the 30th sack of the campaign on Mike Reilly to force BC off the field on their second possession.

Winnipeg’s offence would keep testing the BC secondary to end the first frame. Nichols found Demski streaking down the left sideline at put the ball on him for a gain of 53. But on the final play of the first quarter, Nichols threw while being hit, and after Drew Wolitarsky juggled the ball, Maleki Harris would nab it in mid-air for the interception.

Reilly would start to find a groove to open the second quarter by getting the ball out early to his receivers on short routes. The offence would march 61 yards downfield, but Winnipeg stuffed John White on a short run to force a field goal, which Sergio Castillo would hit from 35 yards out to get the Leos on the board.

The BC defence would nab a second interception of the first half to keep the momentum going. Chris Streveler would be under centre to start the possession for the Bombers. He’d gain a first down on a pair of runs, but after being forced out of the pocket on his third play, Isaiah Guzylak-Messam tipped a pass and defensive lineman Junior Luke settled underneath the ball for the pick.

They’d convert turnovers into points again, as Castillo would put his second field goal of the night through the uprights from 50 yards out to cut the Winnipeg lead to 10-6.

Harris would gain 26 yards on a trio of carries near the end of the first half, but the Bombers’ offence was forced off the field again, leaving Medlock with a 45-yarder to get those three points back, but he’d hit the upright on the long kick. That ended Medlock’s previous streak of 11 straight field goals made.

Winnipeg would get the second sack of the evening on Reilly, forcing the Lions to kick deep in their own territory. They’d opt to concede the safety. That pushed the Winnipeg lead to 12-6 and gave the Bombers possession with around 20 seconds left in the half. They would kneel out the clock and take their six-point advantage into the locker rooms.

BC opened the second half with a spot of trickery. Duron Carter went in motion and rolled out to the flat to receive a pass from Reilly. He’d plant and air it out for Lemar Durant for a 56-yard catch and run that got the Lions down to the Winnipeg 19. White would gain 15 on a carry before punching it in from 4 yards out on the following play. Castillo’s extra point gave the Lions their first lead of the contest.

But that advantage would be short-lived, as Grant would return the ensuing kick-off 55 yards to set the Bombers up on the BC 25. After a quick two-and-out, Medlock would drill a 37-yard field goal to put the Bombers back on top.

Reilly would toss his first interception halfway through the third quarter after Willie Jefferson dropped into coverage to pick off a short pass.

The Bombers would immediately turn that defensive play into points a 20-yard completion to Lucky Whitehead and a 16-yard connection with Kenny Lawler would set up a rushing touchdown from 1-yard out by Nichols. It would be a nine-point game following the point after. On the drive, Harris became the all-time Canadian leader in scrimmage yards on a 1-yard carry, passing Ben Cahoon in the process.

Things would go from bad to worse for BC. Marcus Sayles would get a free lane to punter Josh Bartel, block the kick, and return it to the end zone. Medlock would hit another extra point to give the Bombers a double-digit lead to end the third.

Both kickers would exchange field goals — Medlock hit from 53 yards out before Castillo countered with a 47-yarder to make it 32-16. On the next play, Shawn Lemon would force a fumble and take Nichols to the ground. The Bombers’ pivot would get up and immediately signal backup Chris Streveler to start warming up. He’d headed to the locker room and did not return.

Winnipeg would get the ball back on the next play, as Reilly would put the ball on the turf and Kyrie Wilson would fall on it.

The Lions would get some extra chances to narrow the gap, but the Winnipeg defence would hold strong.

With the victory, the Bombers move to 7-2 on the campaign. They’ll head to Edmonton in Week 11 for a clash with the Eskimos on Aug 23. BC is headed home with a 1-8 record and a matchup against the East-leading Hamilton Tiger-Cats on tap on Aug 24.