One for the Ages: Als stun Stamps in overtime thriller 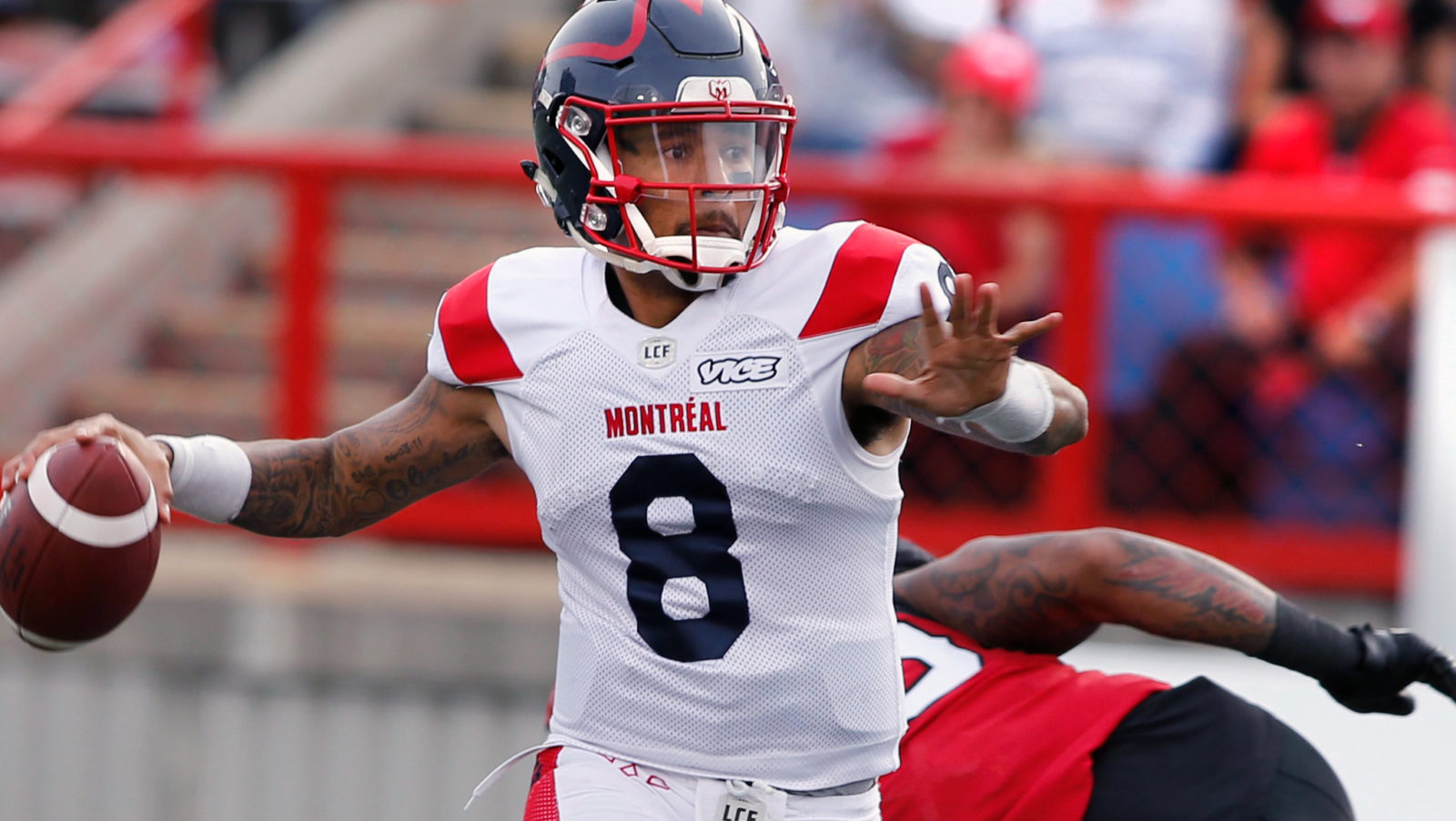 One for the Ages: Als stun Stamps in overtime thriller

CALGARY — The Montreal Alouettes scored twice in the last 50 seconds of the game, then twice more in overtime to pull off a stunning 40-34 victory over the Calgary Stampeders on an unforgettable Saturday night at McMahon Stadium.

Eugene Lewis pulled Montreal to within a field goal, then recovered Boris Bede’s onside kick to give Montreal one last chance to tie the game in regulation. Then, after Bede’s fourth field goal of the game from 27 yards out forced overtime, Vernon Adams Jr. scored twice on quarterback sneaks in the extra frame to give the Alouettes a late lead.

The Stamps threatened to tie or win the game on one last gasp throw on third-and-14, and Eric Rogers appeared to have a game-tying touchdown on a toe-tapping grab in the end zone. But the official — and an automatic review — ruled his other foot touched down out of bounds first, clinching a dramatic comeback victory for the Alouettes.

Reggie Begelton caught four touchdown passes in the loss for the Stamps, including two in the fourth quarter and another in overtime, finishing his night with 173 yards on eight catches. Stamps quarterback Nick Arbuckle completed a sparkling 31 of 36 attempts — good for 86 per cent — for 370 yards, four touchdowns and no interceptions.

Rene Paredes kicked two field goals and Tre Roberson notched his sixth interception of the season, moving him into a tie for the league-lead with Winston Rose.

Adams, in his first game back from injury, threw two touchdown passes and rushed for two more, but was also intercepted twice. Jeremiah Johnson rushed for 107 yards on 13 carries in the absence of William Stanback, while DeVier Posey had 181 yards on 10 catches to lead the Alouettes in his return to the lineup.

Lewis was equally impressive for the Als, racking up 10 catches for 114 yards along with the onside kick recovery, a touchdown and a two-point convert.

RELATED
» Jones: ‘I saw people leaving the stands’
» By the Numbers: View Box Score
» O’Leary: Vernon Adams Jr. and the making of a winner
» Image Gallery: Montreal at Calgary

The win was Montreal’s first at McMahon Stadium since 2009, when the Alouettes won the Grey Cup over the Saskatchewan Roughriders in the infamous ’13th man’ game.

And, ominously, the drama seemed just as spectacular on Saturday, in a game that had just about everything.

With Stanback sidelined, Johnson continued to make the most of his opportunity early in this one, scampering 47 yards to eventually set up a 29-yard Bede field goal, putting the Alouettes on the board first.

The Stampeders responded late in the first quarter however, taking their first lead on a 12-yard catch-and-run by Begelton. Paredes would add the extra point, then another on the ensuing kickoff to give Calgary an 8-3 lead through 15 minutes.

Though the first half was mostly mistake-free, aside from a couple of major penalties and two interceptions by Adams, the offences failed to find much of a rhythm in a tightly-contested duel at McMahon. The Stamps would head to the lockers with a 14-6 lead with Paredes and Bede providing the only second-quarter points.

After a brief two-week layoff, Adams began to shake off the rust in the third quarter. The Alouettes’ dual-threat quarterback completed a 36-yard pass to Posey, his favourite target on the night, then followed up with connections to Johnson and Jake Wieneke, the latter going for a 15-yard touchdown pass to pull the Als within two.

For the opportunistic Wieneke it was his fourth touchdown grab of the season on just 11 catches. Lewis, meanwhile, would haul in the two-point convert to tie the game at 14 points apiece.

While the Alouettes’ defence continued to keep Arbuckle and the Stamps at bay, Bede’s third field goal of the evening — this one from 17 yards away — would cap off a time-consuming 11-play, 66-yard drive to give Montreal a 17-14 lead.

Suddenly, with a slight edge going into the fourth quarter, the Alouettes had a chance to do something they hadn’t since the Grey Cup in 1999: win at McMahon Stadium.

The Stampeders, however, had other ideas. On the very first drive of the fourth quarter, Arbuckle found Begelton clean in behind the defender, leading him to a 56-yard touchdown for his second of the night. The strike from Arbuckle restored Calgary’s lead, 21-17 just two minutes into the fourth.

That wasn’t it from Begelton, who seemingly caught lightning in a bottle at just the right time for the Stampeders. Minutes after giving his team the lead, Begelton would add what seemed like the insurance marker, again beating the Montreal secondary on the way to a 69-yard touchdown. Begelton’s third touchdown of the night extended Calgary’s lead to 28-17.

Just when all had seemed lost, the Alouettes found the end zone late when Adams connected with Lewis to cap off a six-play, 97-yard foray into the end zone, leaving 38 seconds left on the clock. That’s when the drama would really pick up, because on the ensuing onside kick — and after a delay of game penalty — Bede’s onside kick was perfectly placed and caught by a leaping Lewis, giving Montreal possession with half a minute remaining.

In the extra frame, the Stamps took the field first, where Jackson converted a second down try before first round draft pick Hergy Mayala’s fourth catch of the evening moved the offence to the Montreal seven. On the next play, Arbuckle found Begelton for his fourth touchdown of the game, giving the Stamps a 34-28 lead.

Of course, in overtime, the two-point conversion is often critical. Alouettes defensive end John Bowman batted down Arbuckle’s toss, sending the Alouette offence on the field with a six-point deficit and a chance to win the game.

The Alouettes replied with an equalizer, working their way down the field with first downs from Lewis and a scramble from Adams to set up second-and-goal from the three. After a second-down run was stopped at the one, Adams made good on the third-and-one sneak, getting the six points after a delayed call from the official.

Needing just a two-point convert to win the game, however, Adams’ pass was perfectly defended by Roberson, forcing the Montreal offence back on the field.

The drama continued on the ensuing drive. On second down, Adams heaved one up under pressure and seemingly had an open Quan Bray — only for the ball to strike the crossbar of the upright. However, a roughing the passer penalty extended Montreal’s drive, while a first down grab by Bray moved the ball to the 10.

On the next play, Lewis’ big night continued, as he caught a quick swing pass and powered his way through a sea of red, seemingly scoring his second touchdown of the night and putting the Alouettes in the driver’s seat. But on an automatic review, Lewis was ruled down before the goal line. However, Adams would punch it in from the one, getting the Als right back in the end zone.

The two-point convert to Lewis failed, giving the Stampeders a window to win the game. The offence would respond accordingly, going to Jackson on the draw for a 25-yard scamper down to the Montreal 10.

On the next play, after play action, Arbuckle couldn’t find anyone open and was swarmed by the Alouettes’ defence for their second sack of the night. One short completion to Jackson later and the Stamps were in do-or-die territory, needing to score to survive on third down from 14 yards out.

From there, it seemed like Rogers may have done the unthinkable. The Stamps’ towering receiver hauled in Arbuckle’s pass in the back of the end zone and tapped one toe just in bounds — however the official ruled that his other foot touched out of bounds first.

An automatic review upheld the close call, clinching a wild 40-34 win for the Alouettes.

Though many of the Stamps faithful went home disappointed, they were at least entertained. The two clubs racked up a combined 1,023 yards of offence and 54 first downs, turning the ball over just four times in the process — two giveaways each.

Don Jackson finished with 77 yards on 13 carries in his return from injury, while Nate Holley led the way on defence with 12 tackles. DeShaun Amos added an interception.

In the background of Posey’s big night, Wieneke had one of the best nights of his young career, hauling in five passes for 52 yards and a touchdown.

The Alouettes will try to repeat their effort with a visit to Moncton, N.B. in Week 11 to take on the Argos in the CFL’s Touchdown Atlantic contest, while the Stamps head to the bye week before Mark’s Labour Day Weekend and the annual Labour Day Classic on Sept. 2 vs. Edmonton.