The Weekly Say: Is Bethel-Thompson a long-term starter? 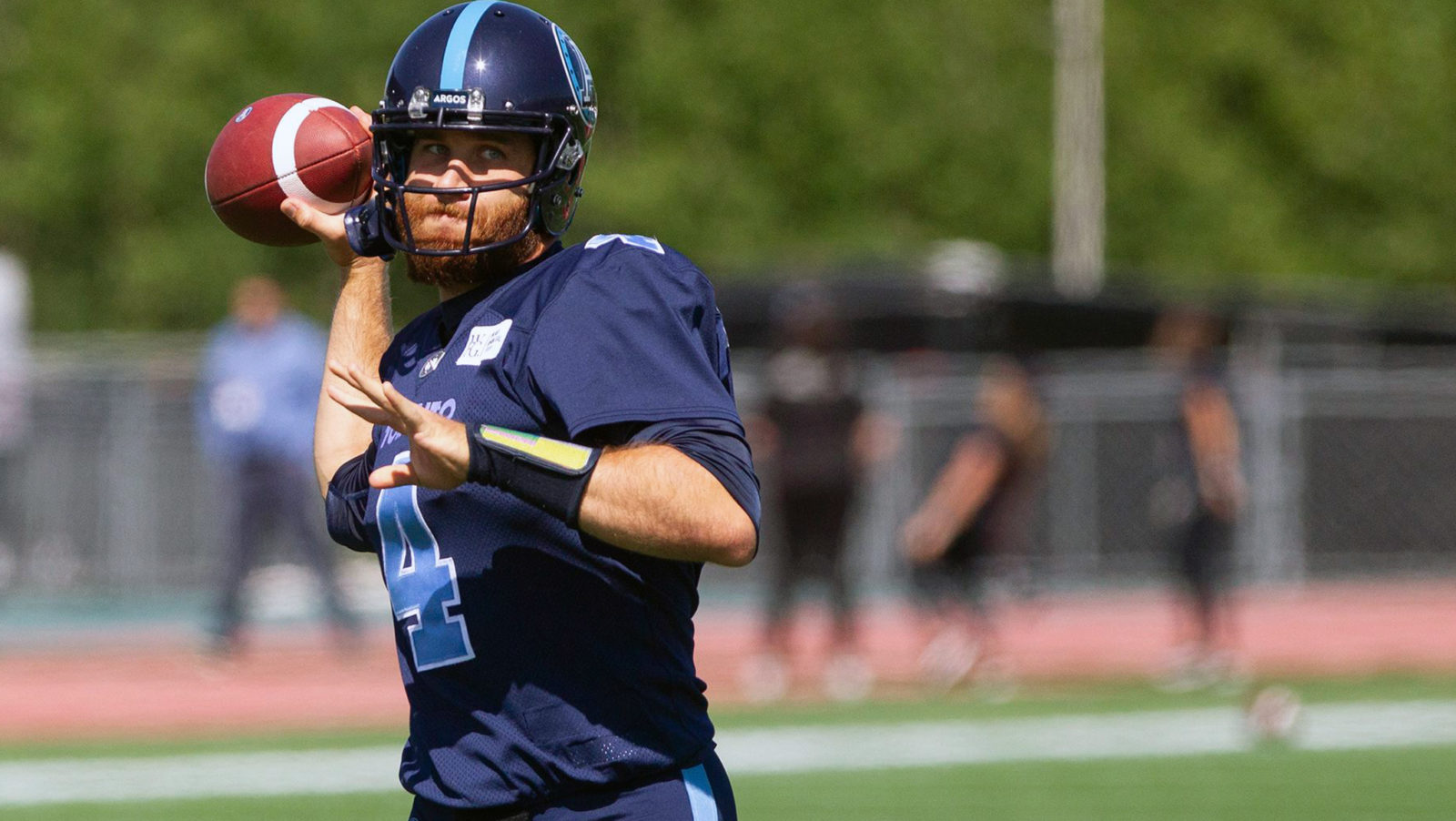 The Weekly Say: Is Bethel-Thompson a long-term starter?

TORONTO — After a rocky start to the season, is the Toronto Argonauts’ offence providing reason for optimism?

Jacques Chapdelaine’s attack took plenty of heat out of the gate, struggling to produce points while failing to utilize top free agent signing Derel Walker in the way many expected. What’s more, James Wilder Jr. has fallen out of the team’s plans, while opening day starter James Franklin lost the No. 1 job after being injured in Week 3.

Lately, though, McLeod Bethel-Thompson is changing the discussion. While the emergence of Brandon Burks and Rodney Smith have helped, the journeyman quarterback is finding success a month after being benched twice in the same game for Dakota Prukop.

In three starts — all against strong opponents in Edmonton, Winnipeg and Montreal — the Argos’ starter has completed 92 of 122 passes (75.4%) for 1,007 yards (335.7 yards per game), seven touchdowns and zero interceptions. Over that span he’s averaged 8.3 yards per attempt, while compiling a quarterback rating of 118.4.

Suddenly, at the halfway point of the season, the Argos boast the CFL’s third-ranked offence, averaging 358.9 yards per game.

Franklin and the recently-acquired Zach Collaros are also in the fold, and of course the Argos could target another quarterback from a different team during the 2020 off-season. But has Bethel-Thompson proven he deserves to be a starter in the three-down game?

The debate is on in The Weekly Say.

Should McLeod Bethel-Thompson be a starter in 2020? 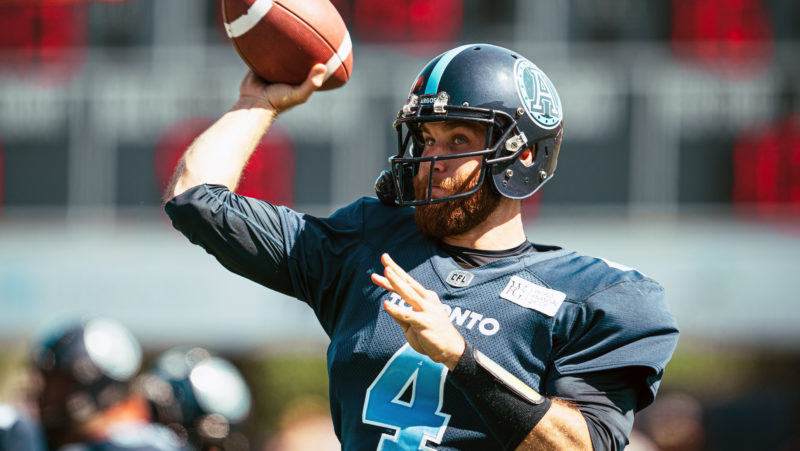 Chris O’Leary: Maybe. Lost in that 1-8 record is a quarterback that’s improved as the season has moved along. He’s taking care of the ball (three straight games without an INT) and racking up yards. Some wins in the second half of the season would strengthen his case for the future, whether that’s with Toronto or with another team.

Don Landry: I’d say not yet. But he is earning starts for the foreseeable future for this season.

Jamie Nye: SLOW DOWN!!!!! He hasn’t won games. Sure he is putting up yards and touchdowns and getting the Argonauts looking a little more stable but by no means would I be believing McLeod Bethel-Thompson deserves a staring job until the wins start piling up in the standings.

Jim Morris: Bethel-Thompson is one of those quarterbacks who gets you by, but a team is always looking for someone better. He’s shown flashes but I still don’t think he can carry a team for an entire season.

Matthew Cauz: This is totally an unfair answer as Toronto has so many issues but I always question any player’s statistics on a losing team. Bethel-Thompson has had some great moments and deserved the win on Sunday but how many of his yards have come when the game was out of hand? He’s isn’t losing a chance to be a starter but I need to see more before proclaiming him the 2020 starter for Toronto.

Marshall Ferguson: I doubt it, he makes a lot of throws but they all feel like empty calories.

Fan Poll
Does McLeod Bethel-Thompson deserve to be a starter in 2020?
Yes
Vote
No
Vote
Submit View Poll Results

Which Mark’s Labour Day Weekend matchup is most intriguing? 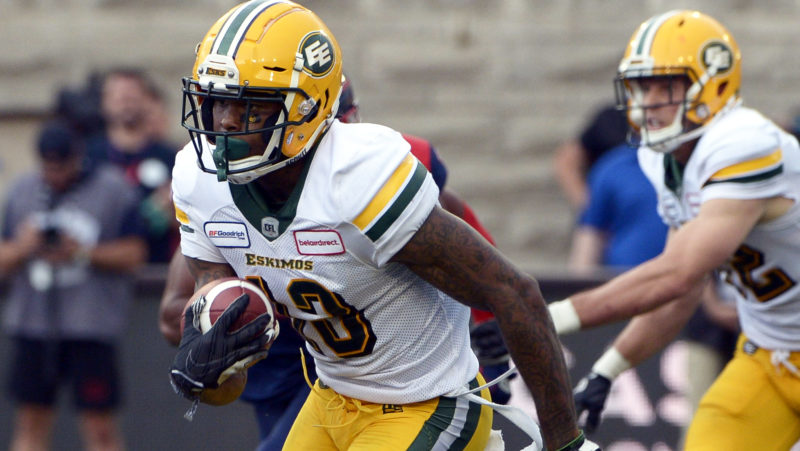 Ricky Collins runs after a catch during a game vs. the Stampeders in 2019 (Peter McCabe/CFL.ca)

Nye: The Bombers and Riders face each other three times in the next month so we have time to get to see more of this. But it’s the Stampders and the Eskimos who are now fighting for West Division supremacy and keeping pace with the other two teams I’ve mentioned. Bring on the Battle of Alberta as one team could seriously push themselves into contender status, with questions remaining over the other

Cauz: Has to be Calgary taking on Edmonton. Could the Stampeders lose three games in a row? When was the last time that happened?

Morris: Of the three games I think the Calgary-Edmonton game offers the most questions. Besides the traditional rivalry involved, it will be interesting to see how both teams respond to their last losses. Despite having the best net offence, the Eskimos are fifth in scoring. Look at the Calgary defence and it’s middle of the road. Both teams badly need a win.

Ferguson: Calgary-Edmonton. With all sudden change in Winnipeg, and Saskatchewan creeping up the standings, the next two weeks are huge for these two.

O’Leary: Given the Bombers’ injury and suspension situation, I’ll default to Calgary-Edmonton. The Stamps need a win to keep pace in the West. The Esks need to beat a really good team, having missed the mark in their last meeting with Calgary and in two shots against the Bombers.

Landry: Bombers/Roughriders. With Matt Nichols out, and now Andrew Harris, the intrigue factor for this one his high. Especially with the Riders on a roll coming in. Can the Bombers’ defence (looking at you, Willie Jefferson) come up with something special? Can Winnipeg quarterback Chris Streveler? If not, Saskatchewan will look good to climb to within two of the top perch in the West.

Should the Bombers either sign or trade for a QB? And if so, who should they target? 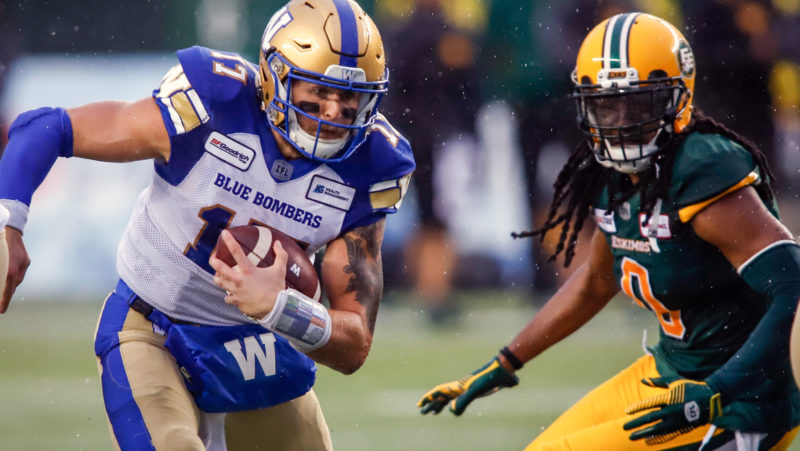 Nye: Well, with McLeod Bethel-Thompson looking okay and James Franklin coming back and Zach Collaros in the fold, I’d be calling Toronto to see what is happening unless you know FOR SURE Matt Nichols is coming back for the final month of the season and will be 100 per cent. Any question about that and you need one of those veterans in the fold.

Landry: I’d ask Streveler to do much more this week against the Riders. Much more than run options with his running back. I’d want to see if he can give me the goods as a quarterback who can control a game with passing as well. If not, then I’d want to bring in someone who’s been on a roster this year, as opposed to someone who’s been retired. Montreal’s Antonio Pipkin or Toronto’s James Franklin would be at the top of my list.

Morris: I’m sure they would like to, but who? Brandon Bridge is still available, but he would need time to learn the offence. Also, if he was good enough to play, wouldn’t another team have already signed him? As for a trade, considering the injuries that have happened at quarterback this season there are not a lot of good, spare quarterbacks sitting on rosters.

O’Leary: It’s been a very good and also very unfortunate season for the Bombers. When fully healthy, they’re the Grey Cup favourite, in my mind. They could use a little Luck right now. Do you see what I mean? Luck? Like, Andrew Luck. If they can’t talk him into crossing the border, James Franklin seems like a possibility. With Montreal extending Matthew Shiltz this week, could Antonio Pipkin be pried away? Those are the top non-recent-NFL-retirees that come to mind for me.

Cauz: Even without Andrew Harris for the next two weeks I say no. Mike O’Shea is a smart enough coach to deal with the absence of team’s leading rusher and passer and the Bombers defence is dangerous enough to carry the team when the passing game stalls. Also this is a great time to see what they have in Chris Streveler.

Ferguson: QB market is as thin and inexperienced as it’s ever going to be at this point. Build something around Streveler and rely on the team’s overall talent level.