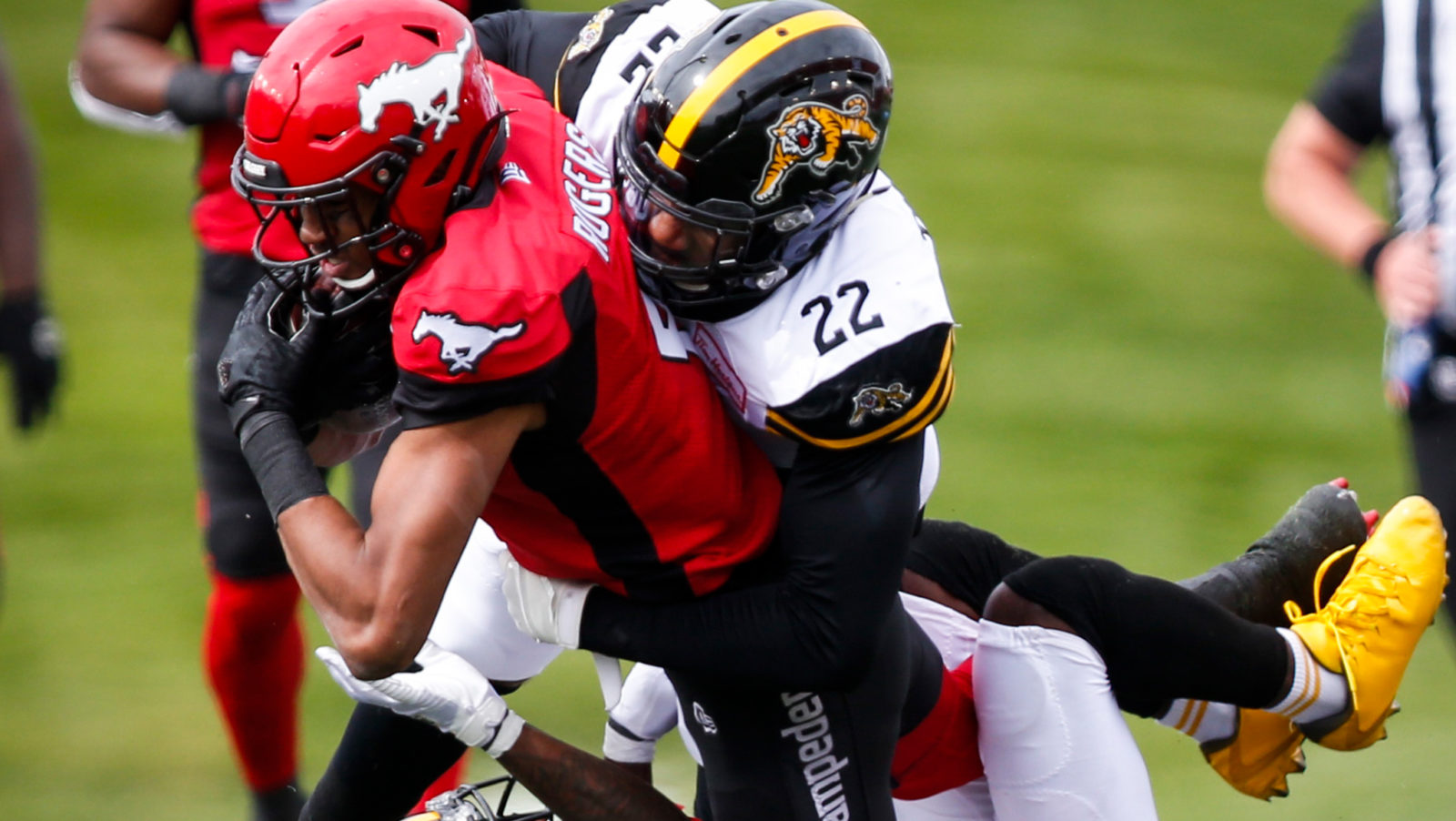 CALGARY — Playmakers make plays, and on Saturday afternoon two of the Calgary Stampeders’ biggest stars rose to the occasion.

Eric Rogers scored the go-ahead touchdown in the fourth quarter, while Tre Roberson‘s blocked field goal with 56 seconds remaining clinched victory by the narrowest of margins.

It may not have been pretty, but the two stars made all the difference in a 19-18 win over the Hamilton Tiger-Cats.

“It was above and beyond, he did everything,” Stamps head coach Dave Dickenson said of Roberson, who also notched his seventh interception of the season in the second half.

“We try to claim that this is a family, take care of each other and I felt he’s my guy that does everything right. He shows up first, he does a lot of the extra film work, he works in the community and to go out there and perform like he did, I’m just proud of it.”

For the Stampeders, the win went down to the wire despite forcing five Hamilton turnovers. After trailing throughout most of the contest, Roberson’s interception and a forced fumble on Ticats receiver Brandon Banks opened the door for a comeback.

Forced to settle for field goals all afternoon — Rene Paredes hit four of his five attempts — Rogers gave Calgary the lead with just over eight minutes remaining. The Stampeders’ receiver finished with eight catches for 129 yards and a touchdown on 11 targets.

“I talked to [Rogers] before the game, I said ‘I feel like this is one of those games you should have 10 catches’ and he just sort of laughed and shrugged it off,” said Mitchell. “I was like, ‘no, I’m serious, people are out there talking like you’re not the top tier guy, and people in this locker room know you are’.

“I just leaned on him a little bit, he had to make some big catches and he took some big hits too — that’s something that’s underrated he always does. It’s huge having those guys on my side.”

Mitchell completed 24 of 40 passes for 342 yards and a touchdown in an inconsistent outing, his third start back from a pectoral injury that sidelined him two months. Reggie Begelton had his fifth 100-yard game this season, hauling in six of nine targets for 109 yards.

“I wasn’t on my game, some things with my arm and my eyes not seeing things the way I wanted to,” said Mitchell. “Credit to [Hamilton] because they were doing a lot of different things, zone coverage, dropping guys in different places. That’s where you’ve got to be conservative, be smart, keep taking the short things as well.”

As for the game winning block, a 42-yard field goal attempt from Lirim Hajrullahu that struck the elbow of a leaping Roberson, there may have been some premonition earlier in the week from Stamps special teams coach Mark Kilam.

“He said in our meeting ‘we’re going to block a kick this game’,” said Mitchell. “We couldn’t have picked a better time to do it, to go out and win the game.”

“The D-line got a great push, it all starts with that push up there,” added Roberson. “We know he hits a low ball. [Kilam] made a great call and I’m just happy to make a play.”

“That elevation and the plays he made shows you he’s special,” said Dickenson.

For Roberson, it was the perfect ending as the team celebrated family day with a third straight victory, moving to within two points of first in the West.

“It’s huge, I just face timed my wife and my son is sitting on the dresser watching me play,” said Roberson. “I love watching him do that, he’s always watching film with me all week. He even gets the iPad and watches it himself. It’s just awesome and I’m happy to be able to make my family proud.

“We have one goal, that’s to win the Grey Cup,” he added. “It’s all going to start with how we finish the season. We want that first round bye, this is our field, the Grey Cup is on our field and we want to protect our field.”

The win didn’t come without a cost for the Stamps, who lost a pair of linebackers as Cory Greenwood and Dwayne Norman both went down. Dickenson couldn’t provide an update immediately after the game.

The Stampeders will travel to Toronto to take on the Argos at BMO Field on Friday, Sept. 20.