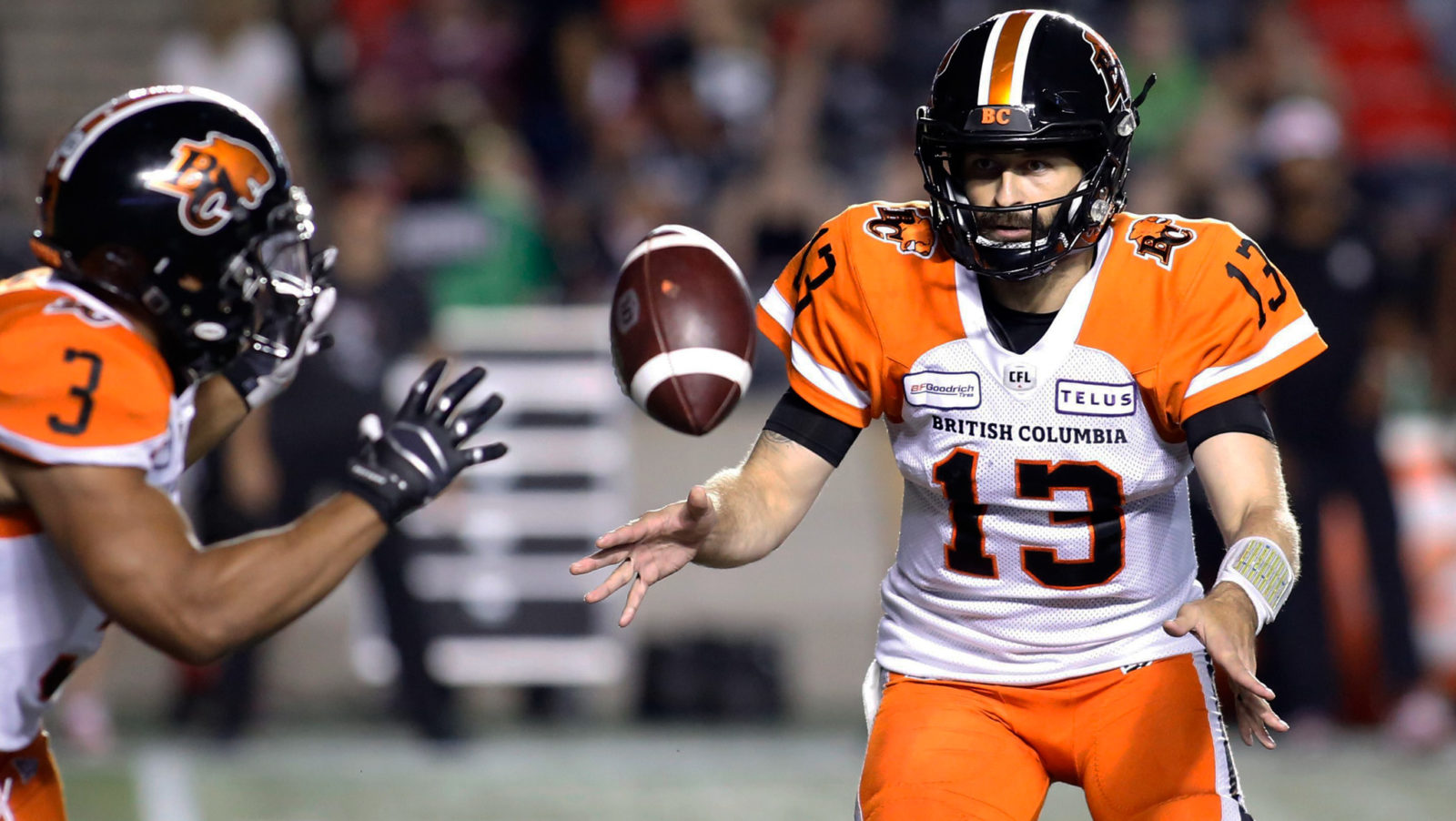 I’ve bristled a little when I’ve heard whispers this season of how Mike Reilly has lost it, is overrated, or was a bad signing by the BC Lions. Sure, Reilly has struggled in his first year back with the Lions, but Reilly didn’t forget how to play the sport from one year to the next. His back-to-back performances against the Ottawa REDBLACKS are proof of that.

This has been a trying year for BC and it will fall well short of expectations come November. But to pin those struggles solely on Reilly, or to suggest the game has passed him by, is ludicrous in my mind. We’re talking about the CFL’s leading passer the last three seasons and that doesn’t happen solely because of scheme or supporting cast. Oh, and don’t look now, but Reilly is in striking distance of making it a fourth straight year atop the passing yardage table.

Things have slowly started to get back on track for Reilly and the Lions’ offence over the last number of weeks. Reilly’s performance Saturday in Ottawa was his best of the season, but he’s gone over 230 passing yards in five of his last six starts. It’s no coincidence that BC’s running game has become far more of a factor during that time; this uptick from Reilly has made their offence far more multi-faceted.

I’m not saying Reilly is blameless in the offensive struggles that have plagued the Lions in 2019. There have been times when he’s forced balls into bad spots in desperate attempts to make something happen. Those decisions have led to 14 interceptions in 13 starts, which is well above his career average. Reilly has also had issues getting comfortable with a new group of receivers, which is understandable but not an excuse.

RELATED
» Rewind: All the best highlights from Week 15
» Lions roll over REDBLACKS for biggest win of season
» Watch: Trick play has Carter air it out for TD

In saying that, plenty of this season’s struggles have been beyond Reilly’s control. I’m sorry, but the way BC’s offensive line has protected earlier in the year, no quarterback was going to be setup for success. At the same time, Reilly’s receivers were having a really hard time getting open and creating separation, which led to a lot of contested throws. It sure does feel like both of those issues are starting to be rectified.

The Lions have allowed just three sacks in their last three games, which is a massive drop from where things were prior. The decision to replace Bryan Chiu with Kelly Bates has paid immediate dividends, which is something I wasn’t expecting. But you can’t argue with results: the Lions were averaging 4.3 sacks against per game prior to the change. That number is down to one in the three games since.

I’m well aware BC’s last two wins have come against a reeling Ottawa team, which needs to be taken into consideration. But it doesn’t change the fact Reilly can still ball and I still firmly believe the Lions made the right call in signing him.

BC won’t be making the playoffs this season, but there’s still a lot to play for in their final five games. Continuing to progress offensively is at the top of the list, because it’s something the Lions can build on to start next year.

New kid on the block

Vernon Adams Jr. is having an incredible season, and as it stands right now, he’s my leading candidate for East Division Most Outstanding Player. Adams did himself no harm in that category Saturday afternoon, as he spearheaded the biggest comeback in Montreal Alouettes history in a 38-37 win over Winnipeg.

The context of what Adams is doing right now is important. He has been the single biggest reason for Montreal’s resurgence in 2019, and a huge reason why this group will be hosting a playoff game in November. When you think about where the Alouettes were to start the season, and where they’ve been for the last half-decade, that’s pretty incredible.

Montreal fired their head coach just days before the regular season, which was an ominous sign knowing they’d missed the playoffs in four straight years. Furthermore, Adams wasn’t even on top of the depth chart to start the year. He only got into Montreal’s Week 1 loss to Edmonton after Antonio Pipkin left with injury.

But even without the context, Adams deserves some serious MOP consideration. While he’s not leading CFL quarterbacks in passing yards, Adams’s sits fourth with 2,953. The same is true on the ground; Adams doesn’t lead the way, but his 332 rushing yards puts him third amongst quarterbacks in 2019. You know where he does lead the way, though? Where it matters the most: scoring.

With 15 touchdown passes (tied for second in the league), and 11 more on the ground, no quarterback has totaled more than Adams’s 26 majors this season. Living up to a nickname like “Big Play VA” isn’t always the easiest thing to do, but Adams has done just that. He has more of the sport’s biggest plays than anyone else!

I’ll be perfectly honest: this is one of the strangest and most difficult years I can remember when it comes to selecting a MOP. If the season were to end today, Adams would get my first place vote in the East Division, slightly ahead of Hamilton’s Brandon Banks. And, if Adams were to be voted through as the East’s MOP, he’s got a chance to take home the big trophy at the Shaw CFL Awards in November.

I can only speak for myself, but Andrew Harris’s positive drug test earlier this season will absolutely play a part in how I vote. With players like William Powell and Reggie Begelton in the midst of outstanding seasons, it’ll be hard not to vote their way knowing Harris was suspended two games. 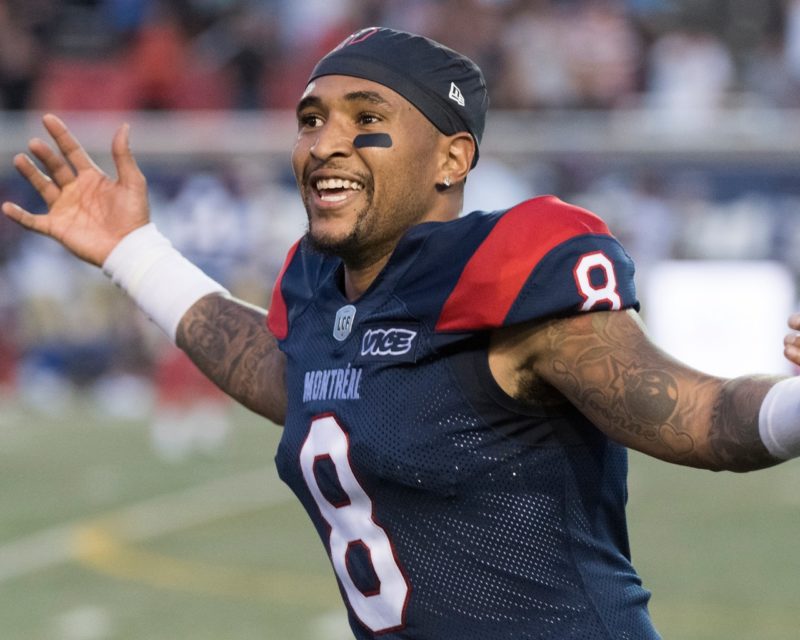 There’s still a lot of football to be played, which means new candidates could still emerge while leading candidates could fall off the pace. But, almost three quarters of the way through the season, Adams has made a case for himself and it’s awesome to see.

Is Hamilton the quietest 10-3 first place team in CFL history? Maybe it’s because of where I’m situated in the country, but the Tiger-Cats aren’t getting anywhere near as much buzz as they deserve. This is an elite team with as good a chance as any to win the Grey Cup, so I wanted to make sure they got a little love this week.

Finally, it appears any thoughts of Eric Rogers’s demise were extremely premature. It has been an up and down season for the Calgary receiver, but he came to play on Friday night under tough circumstances. Already without Markeith Ambles, the Stamps also faced Toronto without the aforementioned Begelton.

Those losses left Calgary with an extremely inexperienced group of pass catchers…except for Rogers of course. He was targeted a whopping 17 times as the Stampeders prevailed over Toronto 23-16 for a fourth straight win. In the end, Rogers caught eight passes for 119 yards, which was his second straight game over the century mark. To make a long story short, Rogers is still one of the most dangerous receivers in the league, which probably should never have been in question.