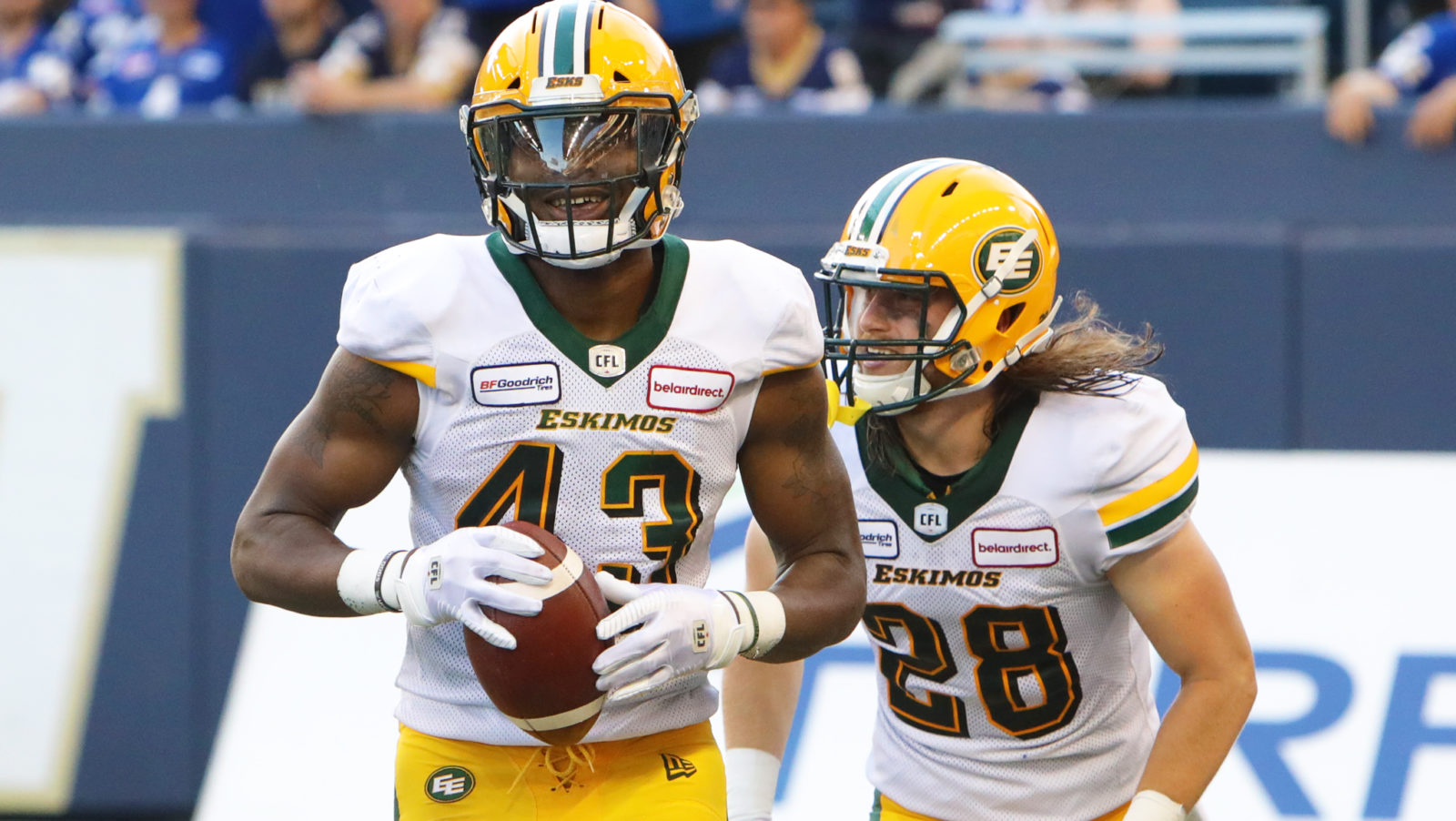 TORONTO — A pair of teams have been unanimously picked to win in Week 16.

The CFL.ca writers have spoken, and congratulations to the Saskatchewan Roughriders and Edmonton Eskimos, who were selected by each and every individual to get the wins in their respective matchups.

The majority of the writers are also with the Winnipeg Blue Bombers and BC Lions, with two-thirds of them picking each team to get the job done.

Both the Montreal Alouettes and Hamilton Tiger-Cats do have a friend in Pat Steinberg, who selected both squads to win this week.

Here are the picks for Week 16.

RELATED
» Weekly Predictor: Three in a row for BC?
» Total CFL Pick ‘Em: Make your picks for Week 16!
» Be the GM in TSN CFL Fantasy presented by LeoVegas
» The DailyRoto 2019 Fantasy Guide 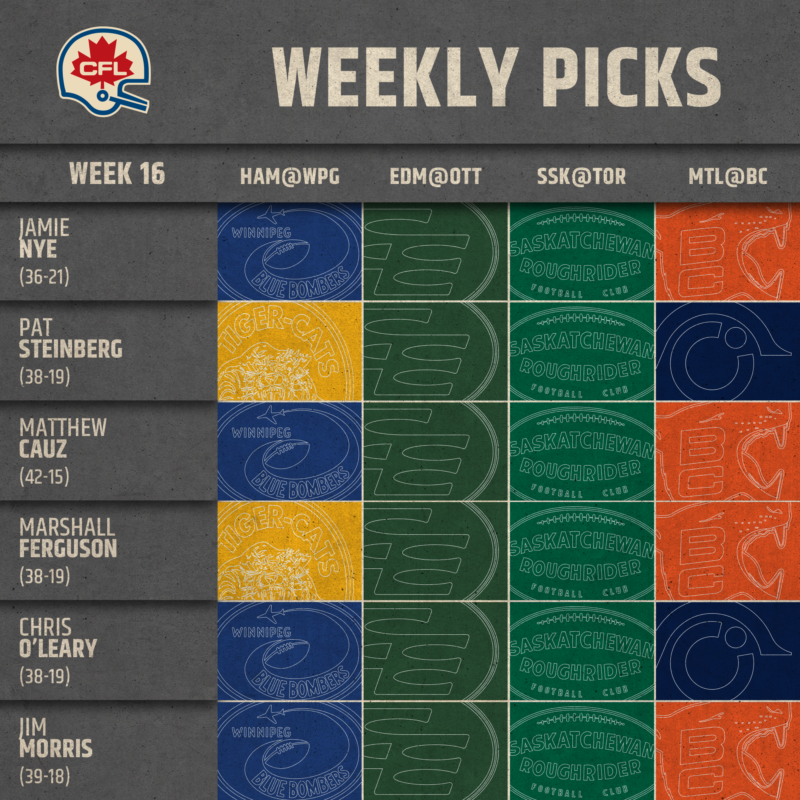 The last time these two teams met up, Jeremiah Masoli was injured and Dane Evans entered and helped hand the Bombers their first loss of the campaign.

Hamilton comes into this game with the best record in the CFL. In their last game against Edmonton, Dane Evans had 336 yards and three touchdowns on 22 of 30 passing. Bralon Addison had 126 yards and a touchdown while Brandon Banks had 72 yards and a score. The Hamilton defence also had three sacks and as many interceptions.

Despite dropping their last game to the Montreal Alouettes, it was a good day offensively for the Bombers. Chris Streveler rumbled for three rushing scores while adding another passing touchdown. Andrew Harris returned from suspension and had 76 yards on the ground. He also led all receivers with 112 yards on five catches.

Both teams have clinched their respective playoff berths but bragging rights are on the line in what could possibly be a preview of the 107th Grey Cup.

To open up triple-header action on Saturday, the REDBLACKS will welcome the Esks to TD Place.

This game will wrap up the season series between the two teams. In the last matchup — Week 9 at Commonwealth Stadium — the Esks came away with a 16-12 win. The Ottawa offence turned the ball over four times in that game, with two of them being interceptions.

Edmonton was forced to play without their star quarterback in Week 15 as Trevor Harris was ruled out with an injury. Logan Kilgore made his first start of the season and tossed for 223 yards and two touchdowns while running in another major. C.J. Gable had 97 all-purpose yards and Greg Ellingson had 50 yards and a touchdown on three catches.

For Ottawa, everything that could go wrong has since their last victory in Week 8. They’ve dropped 10 of their last 11 games and in their back-to-back games against BC, they were outscored 69-12. Dominique Davis and Jonathon Jennings will be splitting snaps under centre for the REDBLACKS in this game.

The Esks sit in the crossover playoff spot and Ottawa is one of the teams trying to track them down. A victory on the road would be massive for Edmonton’s case for making the postseason.

One team is trying to make it to the second season while the other is trying to keep their hopes alive on Saturday.

In the first matchup between these two, Saskatchewan cruised to a 25-point win at home in Week 3.

The Roughriders have come out on the winning side of seven of their last eight games. They’re coming in off a bye, but in their last game in Week 14, they were able to come out with a 27-25 victory over Montreal. Cody Fajardo threw for 254 yards and a touchdown while running for another score. William Powell rushed for 94 yards on 15 touches and 30 yards receiving while getting into the end zone both on the ground and through the air. Shaq Evans also led the team in receiving with 79 yards on three catches.

Toronto will have a different face under centre this week, as James Franklin has been named the starter for this game. He entered the last game to relieve McLeod Bethel-Thompson during a rough outing against Calgary.

Franklin finished the contest by completing 75 percent of his passes for 147 yards and a touchdown. James Wilder Jr. had 75 all-purpose yards while Armanti Edwards and Derel Walker had 80 and 52 yards receiving, respectively. Walker was the man on the other end of Franklin’s touchdown toss in the fourth quarter.

Saskatchewan can clinch a playoff spot with a victory. They could accomplish just that if they play their game on Saturday.

The Alouettes will invade BC Place on Saturday looking for their fourth win in five games when they take on the Leos.

As a result of a suspension for Vernon Adams Jr., the Als will turn to backup Matt Shiltz to help carry them to victory. In two games this season, the 26-year-old has thrown for 107 yards while completing 11 of 16 passes. He’ll have a great supporting cast at his disposal, as William Stanback will be taking handoffs. Jake Wieneke and DeVier Posey each went for over 130 yards and scored in Week 15 and Quan Bray had 91 yards on a pair of catches.

BC has won two straight games, albeit against the struggling REDBLACKS. Despite that, they were able to hold Ottawa to a single sack over those games while getting to the quarterback six times on defence. Mike Reilly completed 77 percent of his throws for 353 yards and two touchdowns and John White returned to the lineup and rushed for 80 yards and a score. Shaq Johnson had 160 yards on three catches and Bryan Burnham reeled in nine balls for 135 yards in the win.

With a win and loss by both Ottawa and Toronto, the Als would clinch a playoff berth. For that scenario to happen, they’ll have to take care of business to close out Week 16.