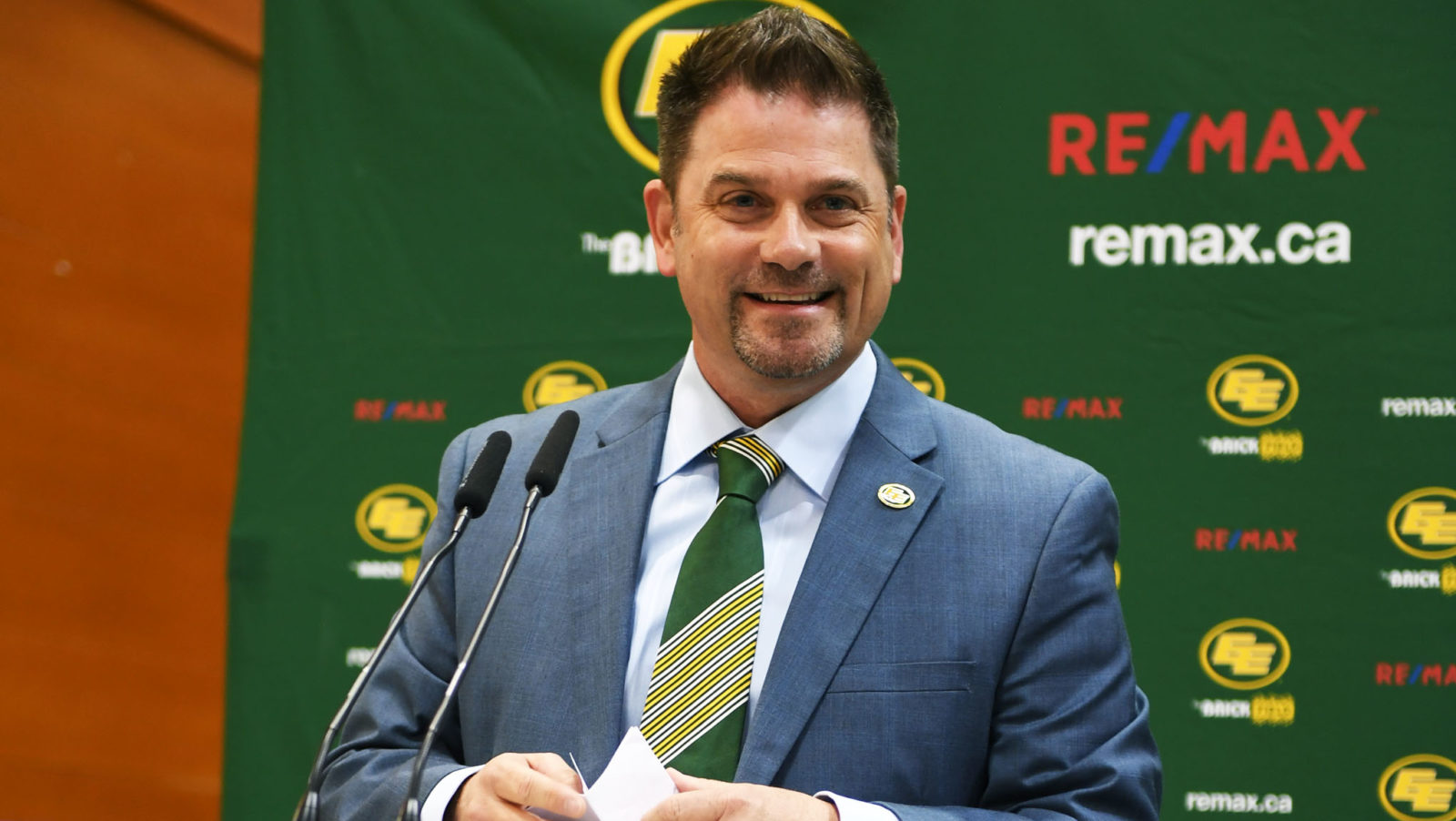 Before Chris Presson ran the Arizona Rattlers and the Northern Arizona Suns; before he ran hockey teams named the Mallards and the Sundogs and before he was in charge of an arena in Wichita, Kansas, there was Dave.

Presson might not be the president of the Edmonton Eskimos without Dave.

When he was a journalism major at Oklahoma State University, Presson worked an internship for the Oklahoma City Blazers.

It sounds like your standard not-yet-out-of-school opportunity. There were four interns competing for one job with the Central Hockey League team and what the work lacked in glamour it made up for in long hours. At least it did for Presson, who was putting in extended days. A few months into the role, his frustration was starting to mount. 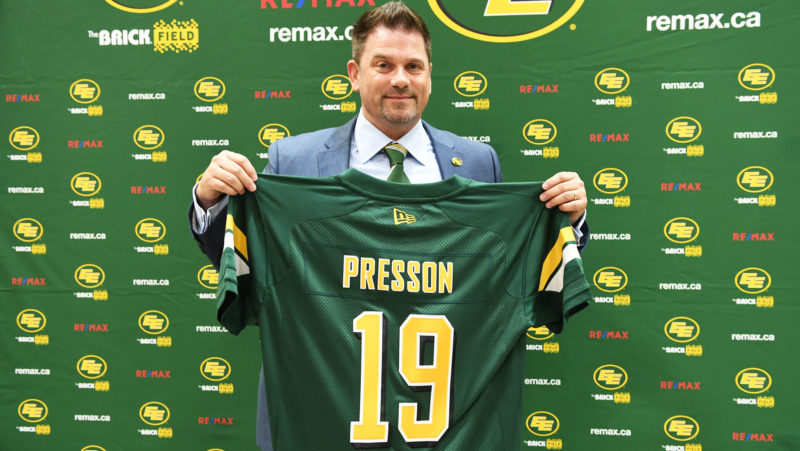 Presson poses with a jersey at his introductory press conference (Esks.com)

He wondered if then-Blazers GM Brad Lund even knew his name.

“I was very goal-oriented. I wanted to go from being an intern to being a GM in six years. I would come in early and I would stay late. It was getting to that point where I didn’t think anybody was noticing, in particular, my boss,” Presson recalled.

“Then one day, my boss called me and he said, ‘I just want to apologize to you for not noticing how much you’re here.’”

Lund actually hadn’t noticed the eager intern, but Dave did.

Dave was the building’s security guard. Presson crossed his path every morning when he’d get to work and at the end of those long days when he was leaving.

Dave saw Lund at work one day and made sure he knew what he’d seen, this young student going above and beyond.

“I don’t know who he is or what he does but he’s here at seven and he leaves at seven,” Presson said was Dave’s referral to Lund.

“Within three months, I had my own team. It’s just persevering. When I got an opportunity — and I still do it to this day — I always try to make the most of it and I always try to grind as much as I can.”

In an almost hour-long sit down with Presson, the word ‘grind’ always seemed to find its way into the conversation. Hired on Aug. 7, Presson started his term as the team’s president on Sept. 1. The Esks’ extended road trip between Ottawa and Hamilton last week was the first time he’d travelled with his new team.

Sitting in the lobby of the Sheraton Hotel in downtown Hamilton, Presson got nods, waves and handshakes from Esks players and personnel as they passed by. The pairing is still obviously new for both sides — team presidents are usually hired in the off-season — but Presson feels good about his early days in a new role.

“I adapt really quickly and so I think I’ve probably gotten up to speed quicker than most, just because I really dive in.

“That’s part of (the reason for) my trip with these guys. I want to make sure that I understand what they do and how they operate away from home and then to formulate those relationships on the football side as well.”

The team president role is nothing new for Presson. In an almost 30-year career, he’s worked in sports management with hockey, baseball, basketball and football teams. But the CFL and the Esks are a new experience.

Presson was working in Arizona as the president of two teams that were two hours apart — the Arizona Rattlers of the Indoor Football League and the Northern Arizona Suns in the NBA’s G-League — when some friends had mentioned a job opening in Edmonton.

He connected with Toronto-based Optimum Talent and things got rolling.

“One thing led to another and one conversation leads to another,” Presson said.

“I think the tradition of the team is what drew me to the job. Then the more I got into the intricacies of the job and meeting people around the job itself, the more interested I became.

There’s undoubtedly a learning curve that comes with the non-business parts of the job, given that this is Presson’s first time working in Canada and he’s learning the CFL as the Esks work their way through this season. He said so far he’s dove in on all facets of the organization’s business.

“(I’m) trying to get my arms around it and do so at warp speed. I’m not a guy that comes in and sits around and tries to figure it out at a slow burn,” he said.

“I’m a guy that, I tell our staff every day: You’ve got to come to work with a sense of urgency. That’s me.

“I’ve had a meeting every hour on the hour for every single day I’ve been here and we continue to do that. I feel like I have a really good grasp for the organization right now. And again, this (Ottawa-Hamilton trip) is a good learning opportunity for me on the football side as well.”

When he takes a bird’s eye view of the organization, his top priority is obvious.

“I think like the majority of the teams we ideally would like to have more people in the seats,” he said.

“I’m sure all of my counterparts across the league would tell you that as well, that we all wish we had that magic wand and we could wave it and put another 10,000 people in the stadium but we can’t.

“It’s hard work. It’s trying to understand the dynamic that exists with the younger generation. It’s also trying to make sure that we create value and keep value for the season seat holders and not go too crazy on the other side for the casual seat buyer.

“It’s an interesting mix that you have to try and put together. But again, that’s that’s probably the No. 1 focal point of my job. I have probably had more meetings around ticketing than any other subject.”

“Within three months, I had my own team. It’s just persevering. When I got an opportunity — and I still do it to this day — I always try to make the most of it and I always try to grind as much as I can.”

How all of that manifests itself will of course be seen through the off-season and into the 2020 campaign. He imagines that some in-game experience aspects will change going forward and is particularly interested in the experience outside of the stadium.

“We’re working with the city on expanding the tailgating,” Presson said.

“There are some challenges around that, but they’re certainly more than willing to work with us. We have to figure out where the best spot is and then what the city is amenable to that’s within the law.”

He put the Alberta rivalry aside and studied what Stampeders fans do in Calgary for their tailgate and would love to help Esks’ fans take their pre-game event to the next level.

“We’re on the north west corner of the stadium. We really need to be on the northeast side, where everyone comes off the LRT,” he said.

“That’s ideally where we need to be to gain traction and momentum around that. We have a lot to do in the off-season and that’s one of our our target points right now.”

As for the on-field product — the Esks are fighting for a playoff spot late in the season for the second year in a row — Presson will continue to study the team and the Canadian game and stay in close contact with GM Brock Sunderland.

“Brock’s in charge of it,” Presson said of the football side of the business.

“Brock, ultimately (reports) up to me, but I want to be involved. I’ll be as involved as I need to be involved. Certainly I try my best to watch the game and I talk to Brock a lot.

“I’ll be involved from afar, but ultimately it’s Brock’s team and Brock’s leadership (on the football side). He can come to me for whatever he needs to and we always have discussions. We talk every day.”

There was a lasting image that Presson took from the team’s recent trip. After they’d beaten Ottawa, the Esks boarded a bus the next day and rode to Hamilton. Presson sat toward the front, near Esks head coach Jason Maas. What should be about a 5.5-hour drive on Highway 401 of course dragged out to about seven hours.

From the time they boarded the bus until the time it pulled into downtown Hamilton, Presson said Maas was consumed with film study and game planning.

“He got on the bus and he and I had a nice chat. But I’m telling you as soon as that bus started rolling, he was on his iPad,” Presson said.

“I fell asleep for probably 15 minutes. I woke up and he was watching a different game. We stopped for lunch, got back on and he’s back at it. Honest to God, I was blown away. He did not shut it down until we were just down the street (from the hotel). Then him and the coaches went into meetings.

“I was just amazed. I knew they grinded. But I don’t think you really understand until you’re in the mix with them how much they work.

“It was an eye-opening thing for me, in a positive way.”

Given his career path and how hockey has made up almost 20 years of his experience, the idea of a move to Canada wouldn’t have shocked Presson. That it came through football, he admits, was unexpected. When he was researching the job and the city, he reached out to some of his hockey connections for input.

He lists off some of his hockey connections like former Oiler Kevin McClelland, Sherwood Park Kings AAA bantam coach Travis Clayton and Bill Scott, the Oilers’ director of salary cap management and assistant to Ken Holland — whom Presson met in OKC — as people who helped sell him on a move to Edmonton.

“(Scott) said the nicest things about (Edmonton) and honest to God that was probably the biggest thing that flipped the switch on for me,” he said.

“He compared it to Oklahoma. He said, ‘I think that the people here basically are as easy to connect with as they are in Oklahoma.’ For someone who’s Midwestern, who spent his whole life in Oklahoma, met his wife in Oklahoma, went to Oklahoma State, that was a great thing to hear. Because that immediately resonated with me.”

It’s still early days for him in Edmonton, but those similarities are popping up for him. Sometimes it’s the people, other times it’s when the drive out of Edmonton takes him into the prairies. He’s immersed himself in his work, which in a way helps the separation from his family — his wife of 26 years, Tracy and their three daughters: Lily (18), Ryan (15) and Lucy (14) — who are all still in Arizona. Lily started at Arizona State University this fall, but the rest of the family will join him in Edmonton in the new year.

For a lifelong grinder, it feels like Presson is getting situated with people who have the same mentality.

“We’re all grinders, that’s why we have these jobs,” he said.

“I think back to the coaches and the players and our equipment staff. Once you’re in it with them you really understand the level of what they do. What I like about it is you then understand that without question, you’re not the only one grinding.”