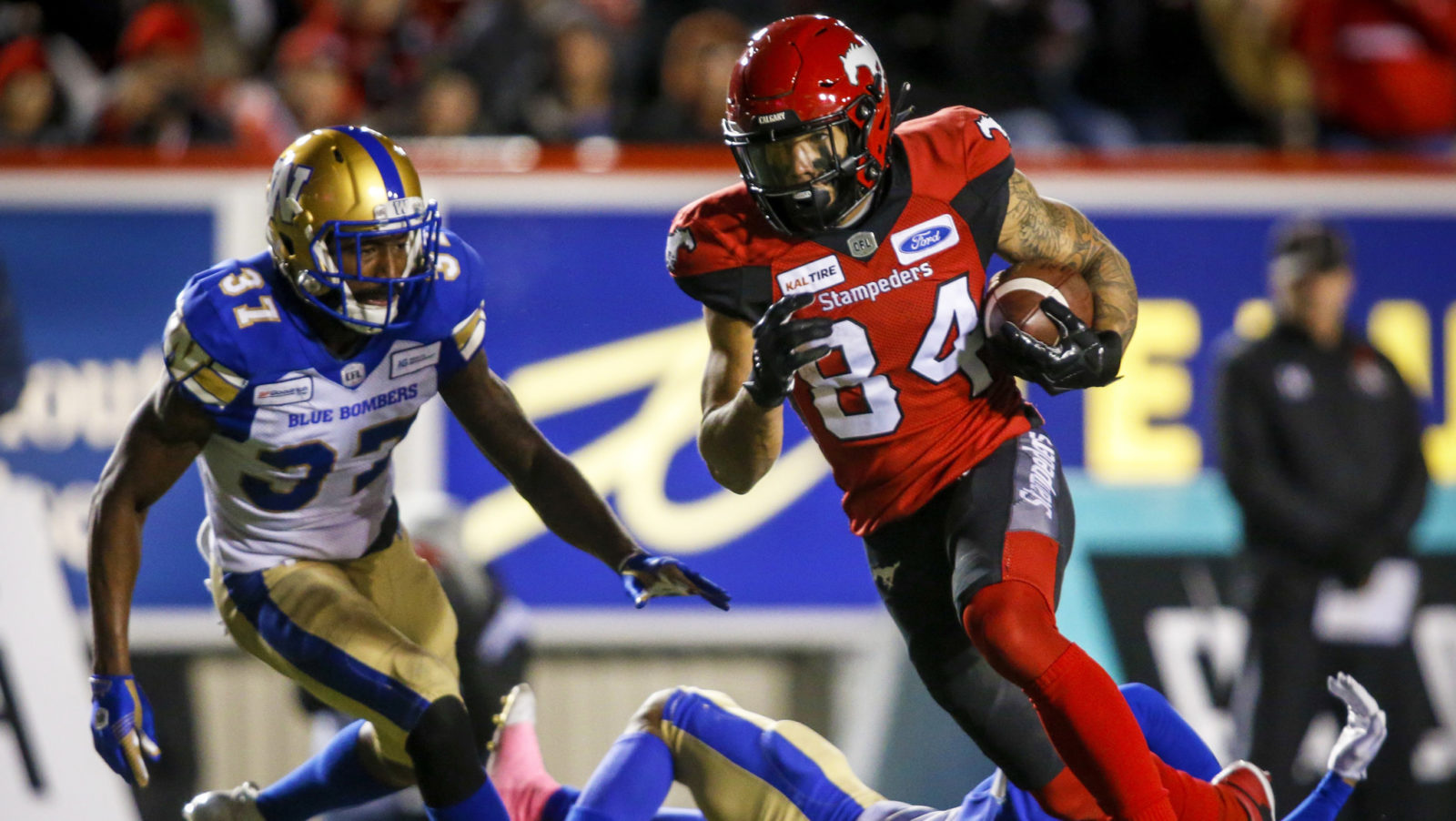 We’ve got one consensus pick while other teams had a majority of the votes go their way.

The lone sweep of the week goes to the Toronto Argonauts. As was the case with their matchup against Ottawa in Week 18, they’ve been picked by every writer to win at home on Saturday.

Both the Montreal Alouettes and Saskatchewan Roughriders have been picked by two-thirds of the writers to walk away with wins while five out of the six are siding with the Calgary Stampeders in the opening game of the week.

Here are the picks for Week 20. 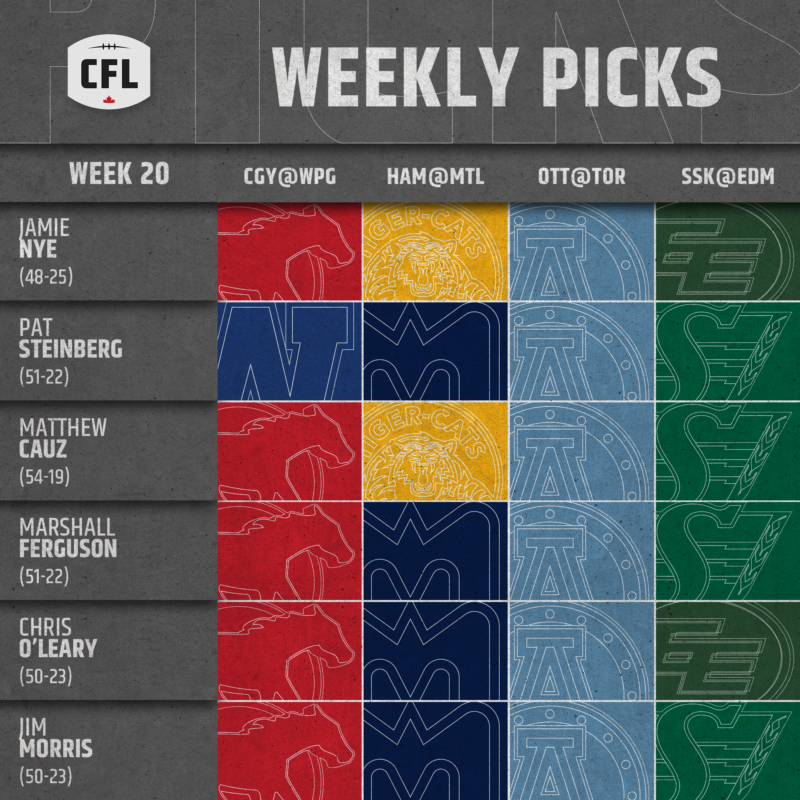 Pat Steinberg is riding with the Bombers this week. Unfortunately for Winnipeg, he was the only writer that sided with the blue and gold.

The teams have split the season series, with the home team taking each of the two previous games. It was the Stamps who came out with the latest victory in Week 19 at McMahon Stadium.

Calgary got another great outing from Bo Levi Mitchell in Week 19. He threw for 337 yards and three touchdowns while completing 66 percent of his passes on the game. All three of those scoring tosses landed in the hands of Reggie Begelton, who finished with 62 yards, but it was Josh Huff who shined brightest, with 121 yards while hauling in all six balls thrown to him. Eric Rogers also had three catches for 71 yards. Calgary’s defence had a solid outing as well, getting a sack, one forced fumble, and two interceptions.

The Bombers will have Zach Collaros under centre while Chris Streveler sits out the Bombers’ last game of the regular season. This will be Collaros’ first in-game snaps since Week 1. He’ll have his top threat in Andrew Harris along with the likes of Darvin Adams, Nic Demski, Drew Wolitarsky, and Kenny Lawler.

Calgary will clinch a home playoff game with a victory and, with a Saskatchewan loss, they’d lock down the West Division crown for the fourth consecutive year.

You’d think the team with the most wins in the league would get a majority of the picks to win this week. Think again.

Montreal is the team that two-thirds of the writers went with. The Als have handed the Ticats one of their three losses on the year. That victory over Hamilton came in Week 4 at Percival-Molson Memorial Stadium — which will be the site of this game.

Vernon Adams Jr. will lead his team in front of the home faithful for the final time before the Als host the Eastern Semi-Final. In his last outing, he completed nearly 70 percent of his tosses for 249 yards and three touchdowns. His favourite target was DeVier Posey, who had 88 yards and one of the scores. Jeremiah Johnson and Quan Bray had the other two receiving majors in the win over the Argos.

Opposing Adams will be Dane Evans, who tossed all over the Ottawa REDBLACKS for 452 yards and a touchdown — he also completed a ridiculous 78 percent of his tosses. Tyrell Sutton had 149 all-purpose yards, Brandon Banks had seven catches for 116 yards, and Jalin Marshall turned four grabs into 85 yards in the win. The Tabbies’ defence was also stout once again, getting to the quarterback three times and forcing a fumble.

This could be a potential preview of the Eastern Final. Strap in for a shootout to open the triple-header, CFL fans.

The middle game of the triple-header will feature a rematch from Week 18.

Toronto has taken both prior games in the season series, and two of their three wins on the year have come against the REDBLACKS.

McLeod Bethel-Thompson is expected to get the start, but how long will the 31-year-old be in the game for? The Argos are planning to give rookie pivot Michael O’Connor a look at some point during the game. He’ll be able to throw to some big-name targets like S.J. Green and Armanti Edwards. Derel Walker’s status is still up in the air, but James Wilder Jr. will factor into both the run and pass game for the double blue.

Will Arndt will be back under centre for the REDBLACKS. In his first start of the year back in Week 18, he threw for 288 yards and a pair of touchdowns but also had three interceptions. He now has two starts under his belt and should fare better against Toronto this time around.

Players on both teams are fighting for bragging rights and jobs next season. It should be a tightly contested affair between the two Ontario rivals.

The final game of Week 20 will see the Esks and Riders meet up for the first half of the season-ending back-to-back.

Trevor Harris was activated from the six-game injured list on Monday. He’d been out of action since Week 13 after suffering an injury to his throwing arm. He’ll likely be without running back C.J. Gable, but with Shaq Cooper in the backfield, he’ll have a reliable option to hand the ball off to. The trio of Greg Ellingson, DaVaris Daniels, and Ricky Collins Jr. are still one of the most dangerous receiving units in the entire league.

On the other side, Cody Fajardo just inked a new tw0-year extension that will keep him in Saskatchewan through 2021. He completed 21 of 27 passes for 224 yards and a touchdown against BC in Week 19. William Powell rumbled for 111 yards and a score on 15 carries. Naaman Roosevelt led all receivers with 106 yards on seven catches. It was the Riders’ defence that played the biggest role, finishing with six sacks, two forced fumbles, and an interception in the win.

Saskatchewan can clinch a home playoff game with a win, tie, or if the Bombers lose. They’ll have to take care of business on the road against an Esks squad that’ll give them a good challenge.