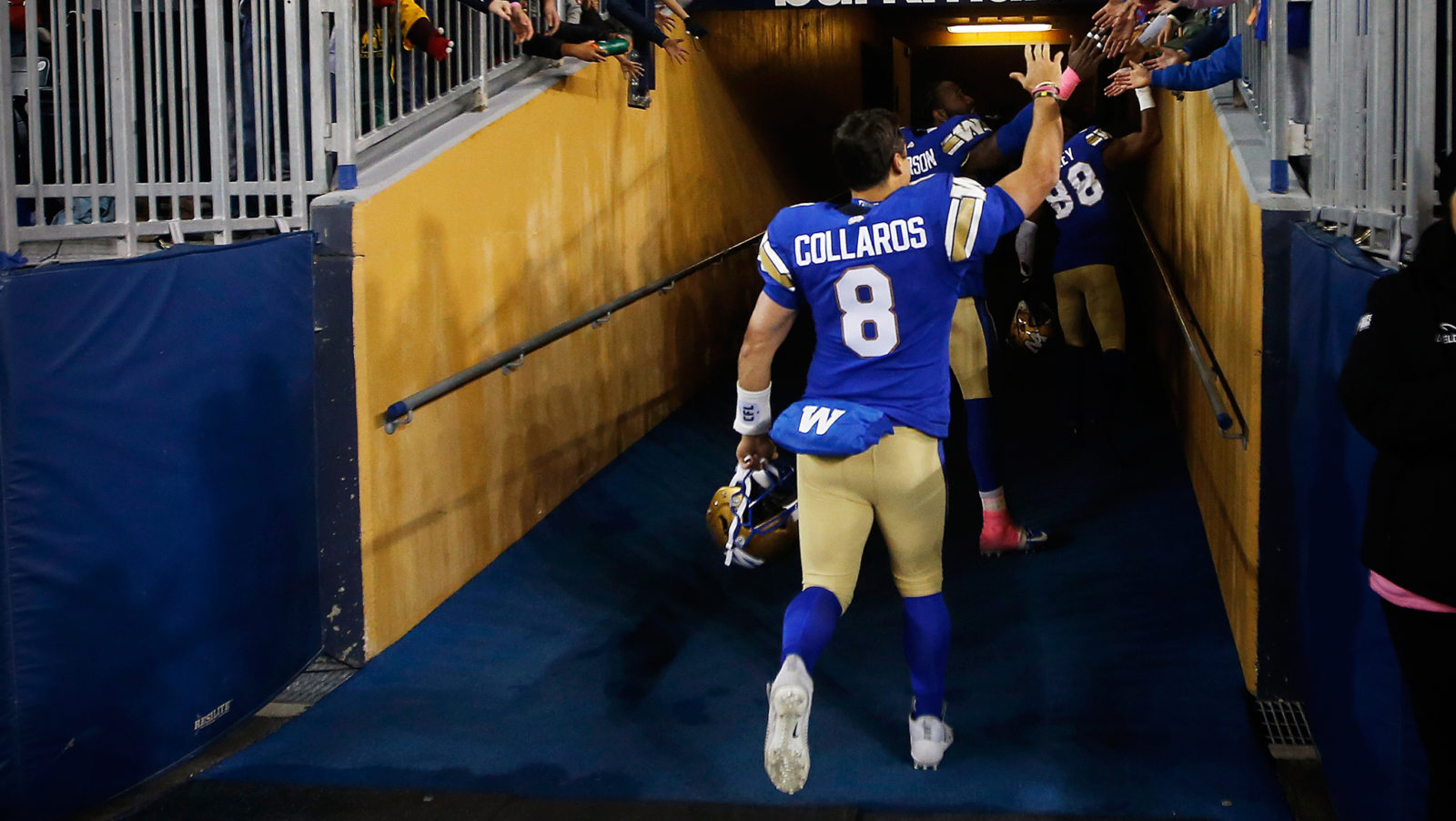 We all know that the biggest story going into the final week of the regular season is the battle for top spot in the West between Saskatchewan and Calgary. Everyone in and around the Calgary area will be in the unusual position of cheering for Edmonton, who they need to beat the Roughriders for a chance to capture the Western Division crown.

Take away all the Alberta themed action and the most intriguing CFL storyline involves a team that isn’t playing this weekend. On the Winnipeg Blue Bombers’ second offensive play from scrimmage, Zach Collaros hit Drew Wolitarsky on an 11-yard out pattern for a first down. An impressive throw, as it was one of those long, wide side throws that’s often the death of quarterbacks with the distance the ball has to travel through the air to reach its intended target.

With that completion, Collaros’ 2019 odyssey just took another strange turn. Before the Bombers’ thrilling last second walk off field goal for a 29-28 win over Calgary, Collaros had played on more teams (3) than he had pass attempts (0). A Simoni Lawrence hit abruptly ended his brief tenure with the Roughriders and did he really even spend a “cup of coffee” with the Toronto Argonauts, who traded for him on July 31 and then sent him to Winnipeg on Oct. 9?

The big question now is what will coach Mike O’Shea do? Does he go back with Chris Streveler, who will have had three weeks to heal up after being placed on the one-game injured list after being ping ponged by the Stampeders defence back in Week 19? Or does O’Shea go with the new guy, the quarterback who is certainly the better passer but comes with his own baggage? I liked the coach’s answer, saying “Those questions will be answered on day three of whatever playoff game that is, so we’ll see how everybody is after this one. We got lots of time.” He is absolutely right. There is no point rushing such an important decision. Also, why not keep your eventual playoff opponent guessing?

There were plenty of positives you can take from Collaros’ game on Friday night. Unlike Streveler, Collaros has the ability to stretch the field and really challenge a secondary. We saw that near the end of the first quarter as Collaros hit Rasheed Bailey on the outside shoulder on a 36-yard completion. Then, on Zach’s first touchdown of the season, he spotted a wide open Kenny Lawler and hit him on a 25-yarder in the end zone before Calgary’s defence could close in. We have not seen many of those throws from Streveler, who has struggled this year in that capacity.

Let me take a brief moment to say that this is not meant to be a hit piece on Chris, who is only 24 years old and has had some really exciting moments in his two years with the Bombers. He certainly has a chance to grow. I enjoyed seeing him on the sideline wearing a “Game Manager” hat. I always enjoy a quarterback with a sense of humour, a rare trait for that position.

Back to Collaros. Beyond the throws there were other parts of his game that impressed. First, his trademark toughness was again on display. He took some hard hits from Jabar Westerman and Wynton McManis and it did not deter him whatsoever. Considering his injury history, I don’t think anyone wold have blamed him if he became gun shy in the pocket. You never got the sense that Collaros was playing scared or looking to throw the ball away at even the slightest hint of danger.

Next, I loved how the team seems to rally around him. I can’t get the image of offensive lineman Jermarcus Hardrick picking up Collaros in celebration after that 25-yard touchdown pass to Lawler out of my head. Collaros is that classic cliché of the hard luck football player looking for one more shot at redemption. Teammates gravitate to his toughness and to wanting to help him on this journey.

Finally, the Bombers did something with Collaros at quarterback that I haven’t seen from Winnipeg in a long time: win a game they were trailing in. Beyond defeating Montreal 35-24 after being down 10-7 to start the second quarter, I don’t remember other times they came back to win. This is a team that can beat anyone when you give them a lead but put a deficit in front of them and things get difficult.

Mike O’Shea’s team trailed 7-0, 14-10, 20-19 (thanks to that Janarion Grant missed convert return score) and then, most significantly, they found themselves losing 28-19 to start the fourth quarter against the hottest team in the West. I’m not sure Streveler could have rallied the offence, but Collaros did. The touchdown drive that cut the lead to 28-26 featured wide side throws, accurate passes in tight windows and of course, the most impressive eight yard touchdown pass you’ll ever see. Let’s go over that wild sequence. After his initial read was covered, Collaros tried to run up the middle only to see two Calgary linemen waiting to pounce, so he backed out, scrambled to his right, then to his left, then a final roll out to his right where he somehow spotted Darvin Adams in the outer frontier of the corner of the end zone.

Of course, this game could have gone so differently. In the third quarter Tre Roberson had an excellent chance for an interception on a deep pass intended for Adams. He was step for step with the Bombers receiver and should have come away with the ball. Sticking with that theme, Wynton McManis absolutely should have had an interception to his name when, later in the quarter, Collaros hit McManis right in the chest. Fortunately for Winnipeg, Wynton could not come away with what should have been the easiest interception of his career. Much like the pick Collaros threw to Nate Holley, these were poor, ill-advised throws where Collaros either did not properly read the coverage or just got too confident with his arm.

Mike O’Shea and the rest of his coaching staff now has two weeks to review Friday’s game film and decide whether Collaros has done enough to start in the Western Semi-Final on Sunday, Nov. 10. O’Shea is one of the smarter coaches in the CFL with a flair for creativity so I would not be shocked to see Collaros start but with plenty of packages set up for Streveler. For the first team to have finished their regular season there is still so much going on in Winnipeg.