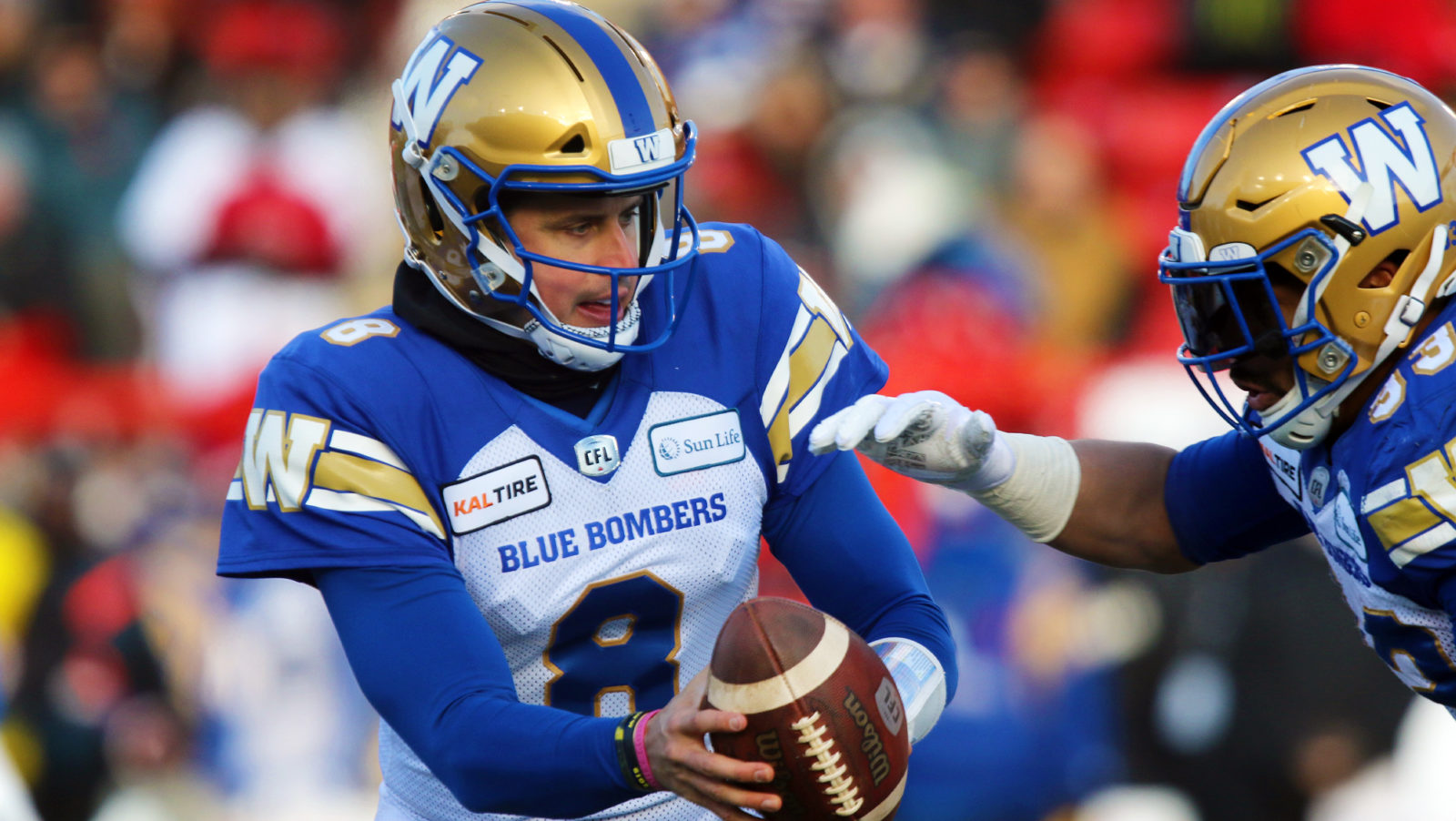 One demon exorcised for the Winnipeg Blue Bombers, with two more to take down now on the road straight ahead.

The Bombers brought down the Grey-Cup champion Calgary Stampeders in dramatic fashion Sunday afternoon, thoroughly thumping the Canadian Football League’s perennial powerhouse 35-14 in the Western Semi-Final at McMahon Stadium in a performance that undoubtedly raised some eyebrows across the country.

As a result, the Bombers are headed to their second-consecutive Western Final next Sunday afternoon in Regina for a prairie showdown against their arch-rivals in the Saskatchewan Roughriders.

It will mark the second consecutive November these clubs have met in the postseason after last year’s win by the Bombers in the West Semi and the first time these two foes have faced each other in a division final since 1972. 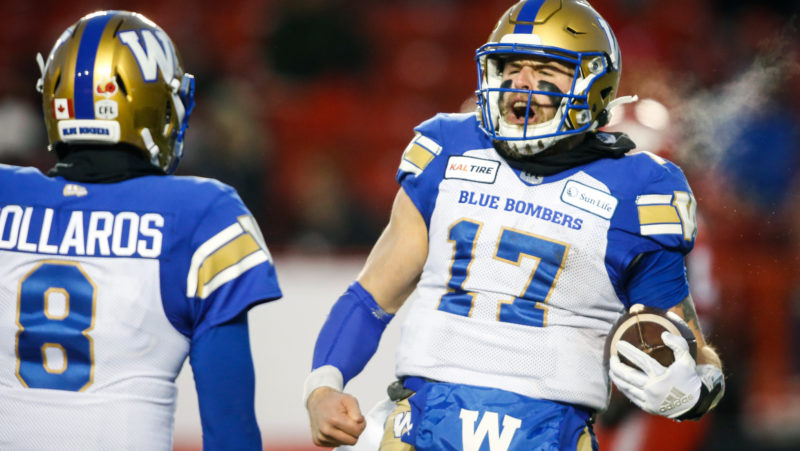 “Our work is not done yet,” said Bombers offensive lineman Jermarcus Hardrick inside a boisterous visitors locker room at McMahon. “I’m just so happy for the guys. But we’ve been in this position before, now we’ve got to get another one. This is one step. Nobody came into this season saying, ‘Let’s go win the semi-final.’ At least, I hope they didn’t. We want to keep this thing rolling.”

Two subplots were massive for the Bombers inside the big picture of Sunday’s victory.

First, the Bombers defence served up a dominant performance as Winnipeg out-scored the Stamps 27-0 in the second half while pressuring Bo Levi Mitchell into the worst game of his pro career. Mitchell was just 12-of-28 for 116 yards with one TD, but three interceptions coming from Mike Jones, Nick Taylor and Mercy Maston.

“Sacks are what we want as a defence,” began Willie Jefferson, “because you want to get the quarterback on the ground. But pressures in a game like this can be just as effective because we wanted Bo to be uncomfortable and not be able to take his five-step, three-step, four-step drops and find his receivers.

“This means a lot, not just to me, the players or the coaches, but to the fans, the organization,” added Jefferson. “A lot of teams don’t come in here and win and for us to come in here with these situations, like the weather, in the way we did… man, that’s a team win. And next week… that’s going to be a helluva game.” 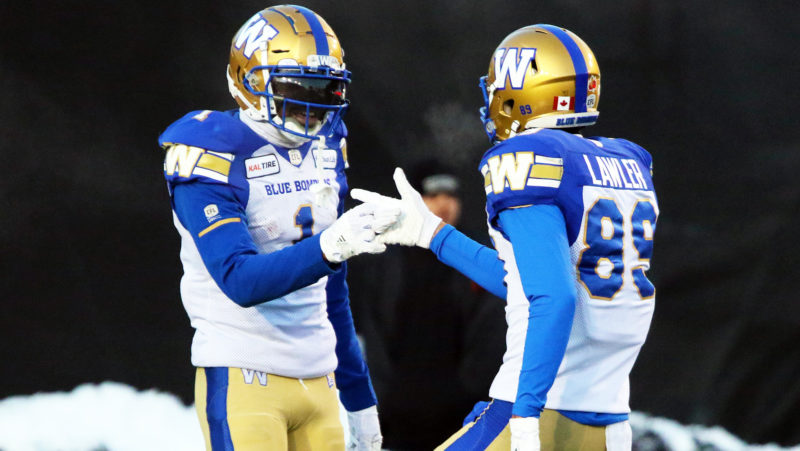 That stellar defensive effort was augmented by the work the Bombers got from their two quarterbacks in Zach Collaros and Chris Streveler. Collaros started and played mistake-free football while connecting with Darvin Adams for a 71-yard touchdown in the fourth quarter, but it was the work of Streveler that seemed to spark not just the offence, but the entire team.

“This guy is a warrior,” said Collaros, nodding towards Streveler. “Toughest guy in the league.”

Streveler didn’t play in the regular season finale after taking a pounding in the second-last game here in Calgary and had been hobbling around Winnipeg for a couple of weeks while working to get healthy again. But there he was in another gritty performance rushing 12 times for 75 yards, including a 24-yard TD run in the fourth quarter. Collaros, meanwhile, finished 11 of 21 for 193 yards.

“This week I had my mind set I was going to play,” said Streveler. “I just wanted to be out there with the guys because I know how much they figh, how hard they work and I know everyone’s fighting through some stuff right now.

“I just feel like I’m not any different than them and if I can be out there, I’m going to do everything I can to be out there.”
“He’s damn good,” added Bombers head coach Mike O’Shea of Streveler. “He certainly gives a different feel to the offence. It helps the running game overall with Andrew, too, in opening that up. Sticking with the run game is very important.

“I don’t know if there’s enough I can say about Chris Streveler. He embodies the idea of honouring your teammates. Both our quarterbacks played extremely well and did a lot.” 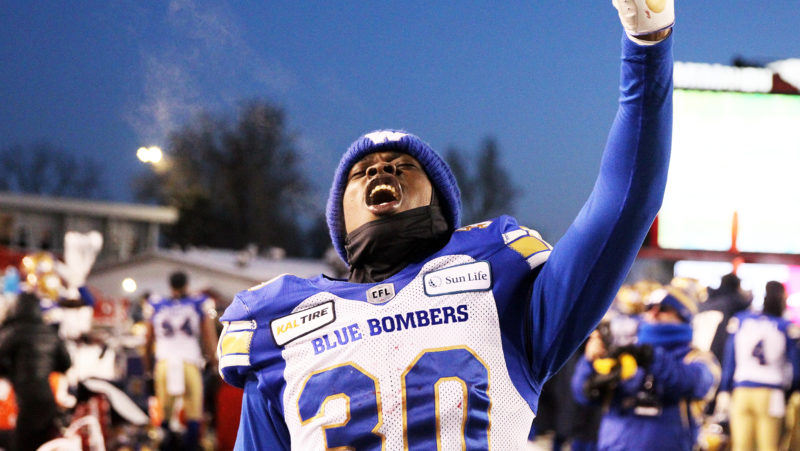 The Bombers out-scored the Stamps 27-0 in the second half, after trailing 14-8 at the intermission.

The Bombers scratch was WR Lucky Whitehead… Cody Speller started at centre for Michael Couture, who was injured in the regular-season finale.

207: The Bombers limited Calgary to just 207 yards of net offence, including just 116 yards through the air.
1-0: The Bombers had been just 5-28 in regular-season and playoff games in Calgary dating back to 1990. Consider Sunday’s win, then, the start of a new streak.
105: Darvin Adams finished with just two catches, but totalling 105 yards. He caught a 71-yard TD from Collaros in the fourth quarter and also had a 34-yard reception in the first half.
4-4: Justin Medlock connected on all four of his field goal tries from 34, 52, 42 and 45 yards.
5/3: The Bombers had five pass knockdowns and three interceptions vs. Bo Levi Mitchell
33%: Calgary converted just 33 per cent of their second-down opportunities (6-of-18).