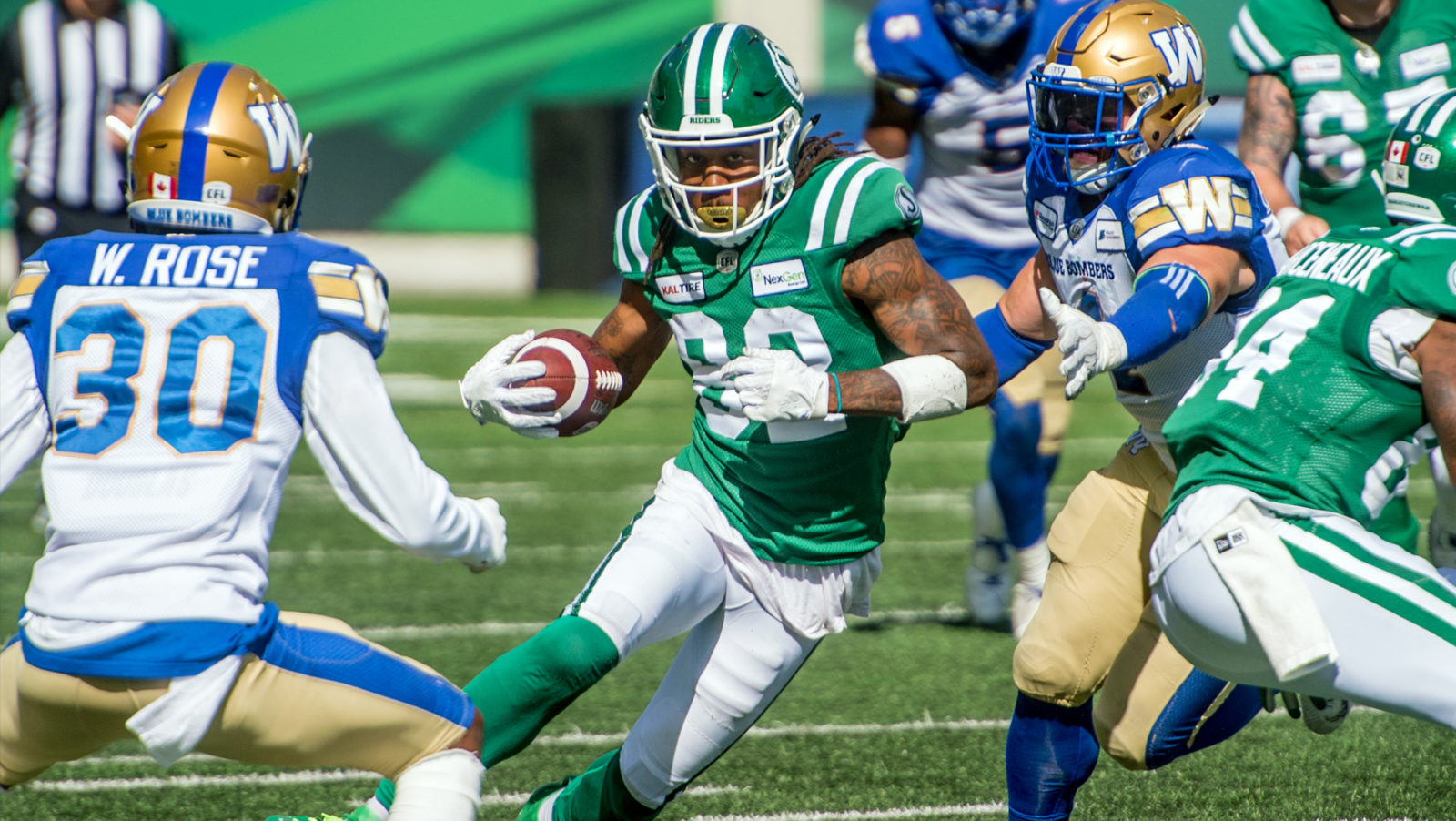 TORONTO — One home team has been picked by the majority to come out victorious in the Division Finals while another is in the minority.

The CFL.ca writers have picked the Winnipeg Blue Bombers to go into Mosaic Stadium and upset the Saskatchewan Roughriders in the Western Final. However, Jamie Nye and Jim Morris are siding with the Green and White.

The Eastern Final is a different story. Four writers have sided with the league-best Ticats to head to the 107th Grey Cup presented by Shaw. Pat Steinberg and Chris O’Leary have gone against the grain in this matchup, picking the Eskimos to come

Here are the picks for the Division Finals: 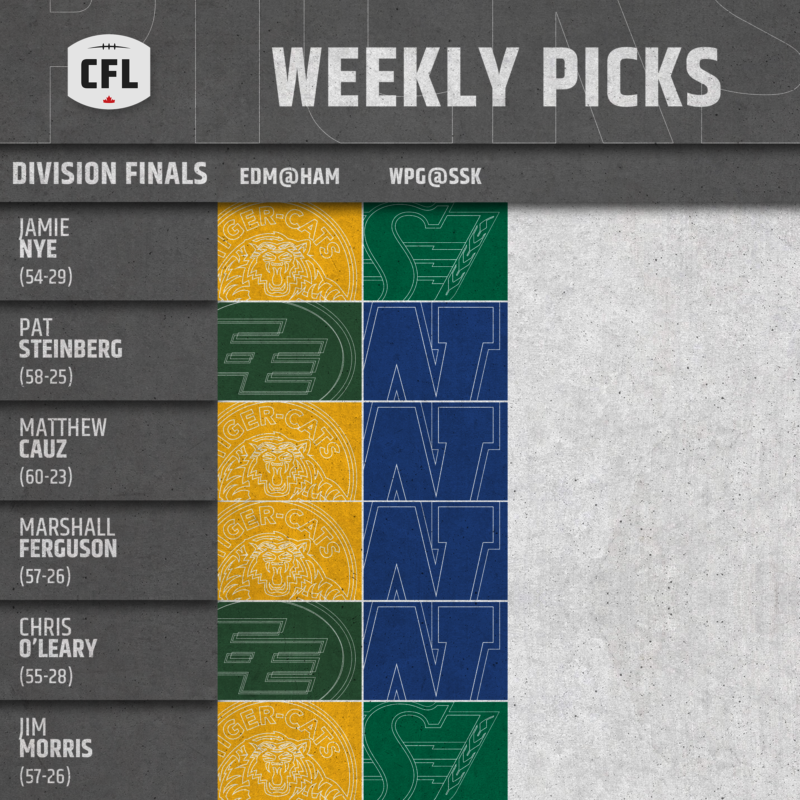 Division Finals weekend opens in The Hammer, with the Edmonton Eskimos invading Tim Hortons Field to take on the league-best Hamilton Tiger-Cats.

The Tabbies and Esks have met up twice previously this season. Hamilton was able to air it out early at Commonwealth Stadium in Week 15 en route to a walk-off victory in the final seconds. In the rematch — during Week 17 — the Ticats once again took care of business at home, winning by 30 points.

The Ticats look to be at full strength heading into their first game of the postseason. Dane Evans, MOP candidate Brandon Banks, Bralon Addison and Tyrell Sutton have formed the core for the team on the offensive side of the ball. They also have a Most Outstanding Defensive Player nominee in Simoni Lawrence, who should make his stamp on the defensive side of the ball.

Lawrence and the rest of the Ticats’ defence will be tasked with shutting down Trevor Harris, who had a near record-breaking performance during the Eastern Semi-Final.

His favourite target was Greg Ellingson, who caught eight of nine passes for 125 yards. Ricky Collins Jr. also had a day, going for 117 yards on six grabs.

C.J. Gable also rumbled for 57 yards while getting into the end zone on two occasions against the Alouettes in the Eastern Semi-Final.

The Esks’ defence was also able to get a pair of sacks and three interceptions — with all three picks being made by defensive back Josh Johnson.

The Ticats finished the year with a 15-3 record — the best in the league. They also went unbeaten at home during the year. Edmonton will have to continue to defy the odds, and being the first crossover team to make the playoffs while putting the only blemish on the Tabbies’ home slate in 2019 would be quite the feat.

A showdown of two of the biggest rivals in the CFL will decide who represents the West in the 107th Grey Cup presented by Shaw.

Saskatchewan and Winnipeg met three times over the course of the season, however, they didn’t first meet until Week 12. Saskatchewan took the initial meeting at Mosaic Stadium on a walk-off field goal. The very next week, the teams ran it back with the Banjo Bowl on the line. The Bombers managed to hoist the trophy and get revenge at IG Field. In the third and final regular-season meeting, the Riders took the season series with a 21-6 win in Week 17.

Riders head coach Craig Dickenson said on Thursday that all signs are pointing to Fajardo being ready to go for Sunday. While it’s still unclear, having the MOP nominee under centre would greatly improve the Riders’ chances to head to the championship.

There’s also a question as to whether star receiver Shaq Evans will be able to play. He reportedly suffered a toe injury and, while he did return to practice on Thursday, he appears to be a game-time decision.

William Powell, Kyran Moore, and Naaman Roosevelt will all be ready to roll, which will give the offence a solid base regardless of the status of two of their top offensive weapons.

In all three of the regular-season matchups this season, the Riders have seen Chris Streveler under centre for the Bombers. This time around, however, they’ll have to deal with the committee of Streveler and Zach Collaros.

The pair had a big hand in the Western Semi-Final victory. Collaros tossed for 193 yards and a touchdown while Streveler rumbled for 82 yards and another score on 13 rushes. Collaros’ lone major came on a 71-yard connection with Darvin Adams that all but sealed the victory over the Stampeders.

Adams had just a pair of catches but led the team with 105 receiving yards on the game. Andrew Harris was also his usual self, rushing for 57 yards on 14 touches.

The Bombers’ defence kept the Stampeders scoreless in the second half during the Western Semi-Final. They managed to have five pass knockdowns and three interceptions but couldn’t get to the quarterback. Don’t expect Most Outstanding Defensive Player nominee Willie Jefferson and co. to be held off the stat sheet in that department twice.