CFL.ca Game Notes: A look at the 107th Grey Cup 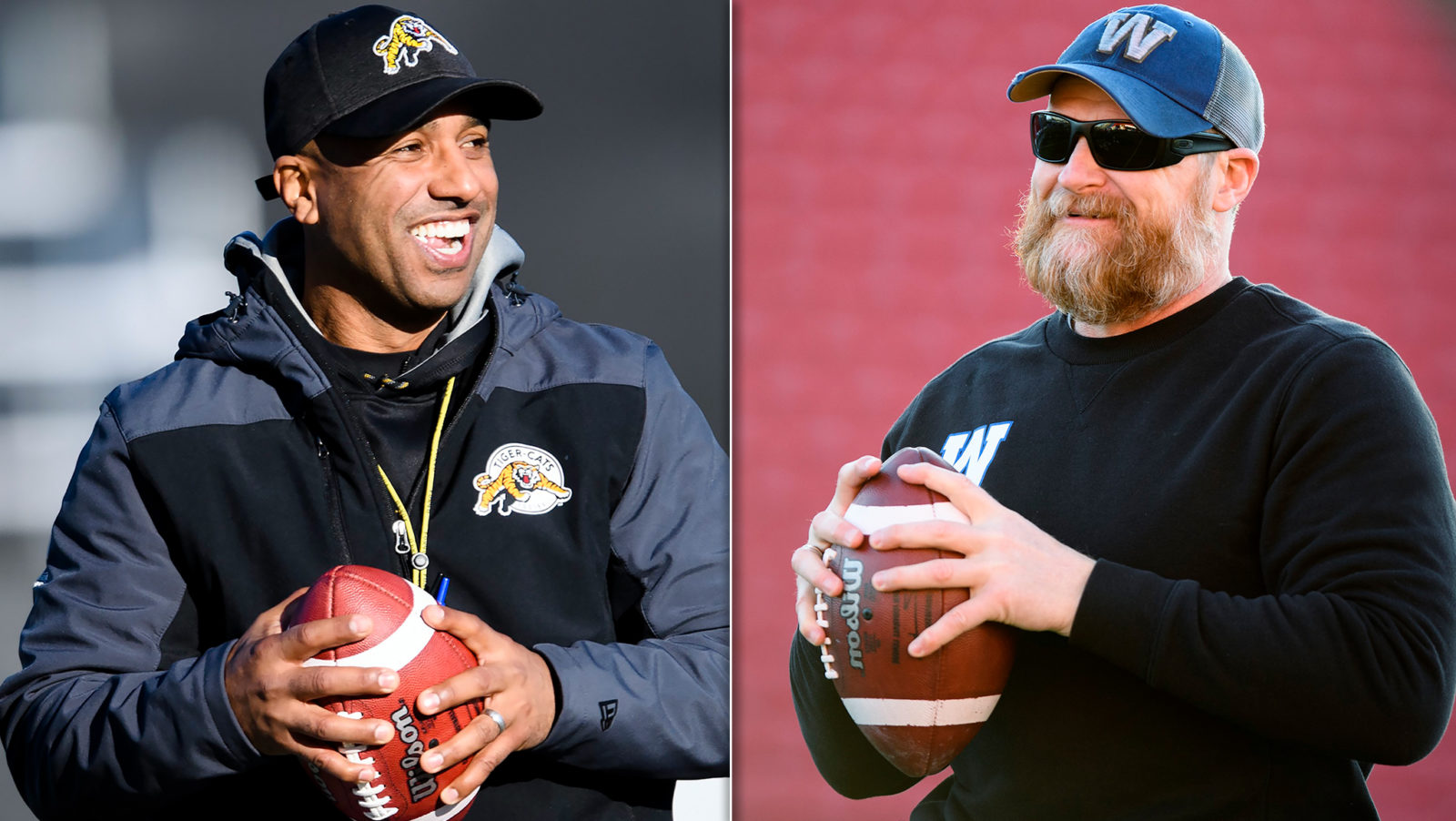 CFL.ca Game Notes: A look at the 107th Grey Cup

CALGARY — There’s always a certain urgency around Grey Cup week, but this year even more so.

The CFL’s longest active Grey Cup droughts go head to head on Sunday, as the Hamilton Tiger-Cats and Winnipeg Blue Bombers clash in the 107th Grey Cup presented by Shaw.

There are so many intriguing storylines as the teams touch down in Calgary. Led by the resurgent Zach Collaros, the Bombers are the first third-place team since 2005 to win consecutive road playoff games to advance to the Grey Cup.

The Ticats, meanwhile, won a franchise best 15 games, including a perfect 9-0 at Tim Hortons Field, led by the arm of rising star sophomore Dane Evans.

In any case, Sunday offers the potential of a Grey Cup classic, a battle of the league’s highest-scoring teams. The Ticats and Bombers ranked first and second in three key areas: points for, offensive points and touchdowns. They also ranked in the top three in explosive plays, run defence and return touchdowns.

Can the Ticats cap off their best season in franchise history with a championship? Or will the Bombers defy the odds and put an end to their 28-year drought?

Kickoff is at 6 p.m. ET and can be viewed on TSN, RDS and ESPN2, and followed live via CFL.ca Game Tracker. Click here for more broadcast details.

– These teams were a combined plus-15 in regular season turnover ratio. In the playoffs, Winnipeg is plus-seven and has not committed a turnover. Hamilton was plus-two in a division final win over Edmonton, making two giveaways. Of Winnipeg’s 55 playoff points, 16 were scored directly after takeaways (29%). Hamilton scored 10 of 36 points off of turnovers.

– Hamilton won both games, the first with Masoli and Nichols at QB, the second with Chris Streveler and Dane Evans as new starting quarterbacks. Winnipeg dominated game stats but not the scoreboard, with more offence, second down conversions, passing and time of possession.

– Andrew Harris led all rushers with 90 yards on 18 carries. Brandon Banks led Hamilton receivers with 14 catches for 161 yards. Kenny Lawler led all receivers with 186 yards on 13 catches. Finally, linebacker Simoni Lawrence had his record 17-tackle effort in the second of two games.

– Hamilton brings a team record 15 wins and a perfect 9-0 home season into this Grey Cup. How did the previous teams do? There were 10 prior 15- or 16-win teams to enter the playoffs: Seven of those 10 made it to the Grey Cup as Hamilton has done in 2019.

– Winnipeg comes in as a third place Grey Cup participant. They are the first team to come from third place (winning consecutive road games) to reach the Grey Cup since Edmonton in 2005.

NOT YOUR AVERAGE ‘BACKUPS’

– For the first time since 1980, both Grey Cup participants are missing their original starting quarterback after Matt Nichols and Jeremiah Masoli suffered season-ending injuries. The 1980 Grey Cup had Edmonton start the year with Tom Wilkinson as the starter but ended with Warren Moon as No. 1. Hamilton started off with Bruce Lemmerman but he gave way to Dave Marler late in the year.

– Zach Collaros became the first quarterback in CFL history to start a division having been on each team’s roster in that season. Collaros pushed his playoff record to 3-1 as a starter and brings an 0-1 Grey Cup record (2014 Hamilton, 25-of-33, 342 yards).

– Collaros in the second half last week: 8-of-12 for 119 yards (Nic Demski was targeted on five of those second half throws). Collaros has completed three passes of 34-plus yards to Darvin Adams in the playoffs (34, 71 and 63).

– It’s been well documented that the Bombers and Ticats enter Sunday with the longest active spans without winning the Grey Cup. Winnipeg has gone 28 seasons since last winning in 1990, while the Ticats haven’t won since 1999, a span of 19 years.

– The two clubs combine for the second longest Grey Cup drought since the Second World War, from 1945 onward. That 47-year total is narrowly exceeded only by the 1983 Grey Cup, when BC (18 years) and Toronto (30 years) combined for a 48-year drought.

Note: Overall the Roughriders did not win from their inception until 1966.

– Teams with better starting field position went 65-16 and thus won 80 per cent of the time in the 2019 regular season and were 4-0 in the 2019 division playoff games. However, counter to this statistically significant trend, the last five Grey Cup winning teams (2014-2018) all overcame poorer field position to win. Since 1996, teams with the better field position are only 11-12.

– It is ball control that seems to be pre-eminent in achieving Grey Cup success. Teams with more time of possession have won 13 of the last 14 Grey Cup games back to 2005.

– Teams with a better success rate on second down have won eight of the last 10, and 19 of the last 23 Grey Cups.

– No team that has allowed more sacks has won the Grey Cup since 2012 when Toronto gave up one more than Calgary.

– Turnover Battle: Since 2000, only Calgary in 2014 has made more turnovers and still won the Grey Cup. Since 1988, teams that had a better turnover ratio went 23-1, winning 96 per cent of the time. Hamilton in 2014 is the only team to ever have zero turnovers and lose.

– Since 1992, seven teams have fumbled a kick return and turned the ball over. Of those seven teams, six ended up losing the Grey Cup.

– Teams with more explosive plays on offence have won seven of the last 11 Grey Cups.

– Winnipeg has won the last five games in post-season vs Hamilton; the last Ticats win being the 1989 Eastern Final.

– Winnipeg allowed Saskatchewan 256 net yards in the second half last week but surrendered just three field goals and made a goal line stand to keep the Riders out of the end zone.

– Previous Grey Cup Experience: Of the 48 projected starters, Winnipeg has five and Hamilton has 12 players that have appeared in a Grey Cup.

– Winnipeg has lost five consecutive Grey Cup appearances (the record is seven losses in a row by Regina-Saskatchewan from 1923 to 1951).

– Hamilton has lost its previous two Grey Cup appearances, those coming in 2013 and 2014.

– Of the 44 players that suited up for Hamilton in the 2014 Grey Cup, nine will likely be dressed for the 107th Grey Cup vs. Winnipeg (Banks, Laurent, Crawford, Murray, Tasker, Lawrence, Breaux, Daly and Filer). Two are now with Winnipeg in Collaros and Medlock.

– Winnipeg has yet to make a post-season turnover in 27 possessions and on 13 kick returns.

– Hamilton did not allow an Edmonton touchdown drive in their final 11 possessions, and made all three of their sacks in the fourth quarter last week.

– The Bombers have had their opponents start in the Winnipeg end just four times. Saskatchewan did not score on their two chances.

– Both kickers come in with Grey Cup experience: Justin Medlock in 2014 for Hamilton and Lirim Hajrullahu in 2017 for Toronto.

– Justin Medlock enters the Grey Cup with a streak of 20 straight FGs made; 12 reg. season and 8-for-8 in the playoffs.

– Both teams enter Sunday’s contest with plenty of momentum. The Bombers won the second half vs. Calgary 27-0 and carried that into a 10-1 lead after 15:00 vs SSK, a run of 37-1. Hamilton scored either a TD or field goal on five of their first eight drives vs. Edmonton.

– Hamilton kick cover teams have given up just one big play return in the last six games, and just four in their last 12 games.

– Flags: Winnipeg drew only five penalties last week and none by their defence. Hamilton had just six penalties vs Edmonton.