Fantasy Strategy: Darvin set to have a day 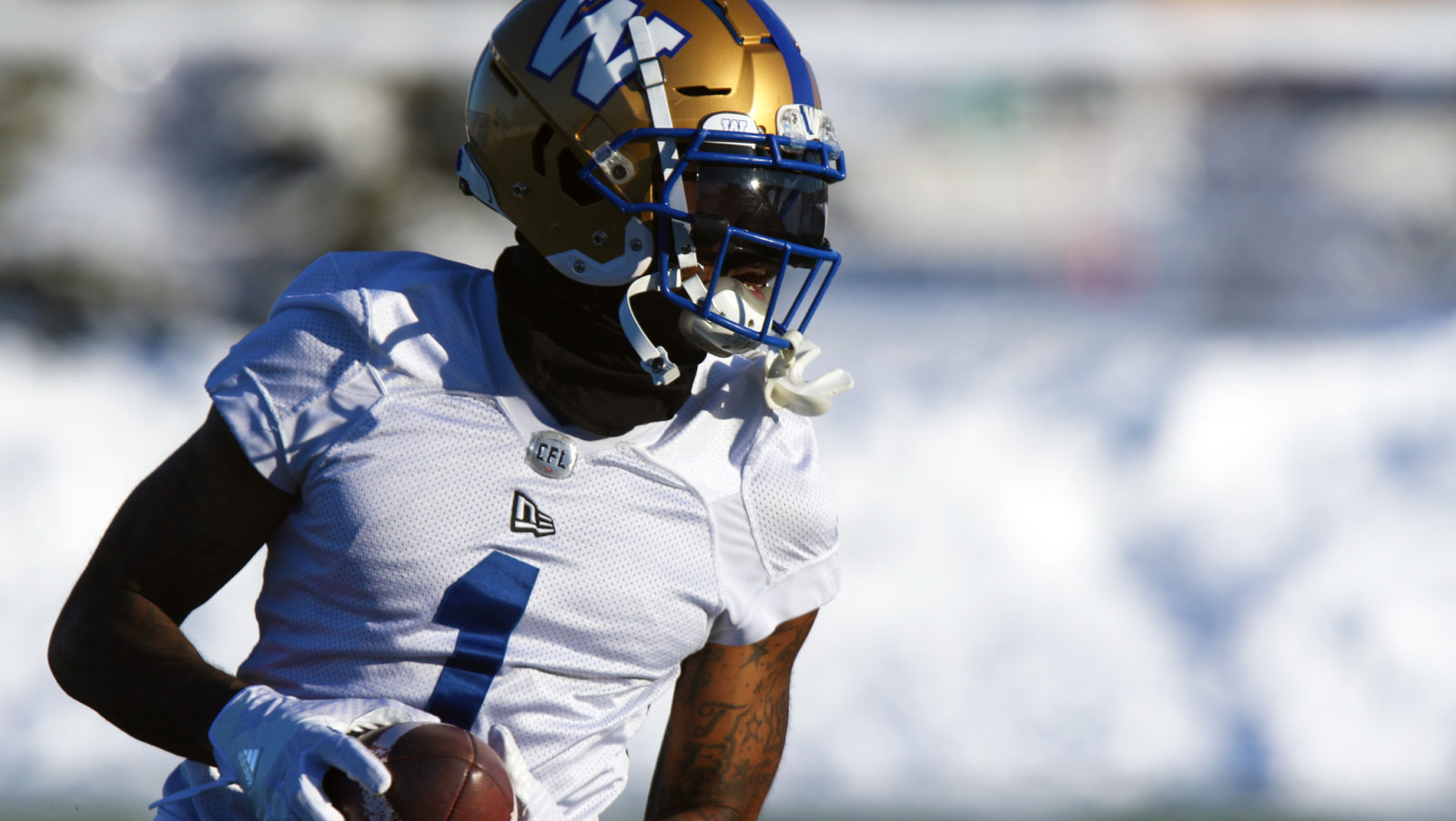 Fantasy Strategy: Darvin set to have a day

Grey Cup week has arrived and with it, the final week of CFL Fantasy for 2019. From a Fantasy perspective, it features two teams that have really been more like five or six different offences this season due to scheme changes following injuries. Hamilton came out of the gates featuring Sean Thomas Erlington as a rusher and receiver but morphed into a backfield by committee after losing him to injury. When they lost Masoli for the season, the offence became much more conservative for a number of weeks but eventually opened the play book up as the season went on and Evans’ comfort level grew in the offence. On the Winnipeg side, each of Nichols, Streveler, and Collaros have brought very different schemes and usage rates for the weapons in their offence. There is a lot of data to go over for just a single game of players.

Throughout the regular season, the Hamilton Tiger-Cats ran the second-highest paced offence in the league at 57.8 plays per game. Add to that their having passed for the most yards per attempt this season (8.97) and Winnipeg’s having allowed the most completions of 30+ yards this season (32) and there are all the reasons in the world to expect Dane Evans to have a big game on Sunday. His salary is significantly higher than the rest of the options at the position, but he also has the most certain workload and the highest ceiling by a wide margin.

Zach Collaros, on the other hand, comes with a less reliable workload, having yet to attempt more than 30 passes or to pass for over 300 yards in a game since getting the starting nod in Winnipeg. On a per-dollar basis his projections are similar to Evans, but he also carries significantly more risk of losing playing time to Chris Streveler if the offence struggles out of the gate. The TiCats allowed the second-fewest yards per pass attempt this season (7.59) along with the fewest passing TDs per attempt making this a pretty difficult matchup for Collaros as well. If the Tabbies pass rush, which created the second-most sacks in the regular season (54), manages to put pressure on Collaros more consistently than the Riders did in the West Final, the Bombers could turn to Streveler’s running ability sooner than later.

If Fantasy players are looking for contrarian options at the position, it’s one of the few games in which backup quarterbacks could be genuine sources of Fantasy production. Chris Streveler remains a part of the Bombers game plan on a weekly basis, but if he’s going to pay off his $5K salary it will likely come as a result of early struggles for the Bombers offence leading to increased playing time and red zone opportunities. Players considering Streveler should probably avoid Andrew Harris or Winnipeg receivers in their lineups as they provide negative correlations. David Watford, on the other hand, is more of a threat to goal-line scoring opportunities for Hamilton RBs than their WRs and could be a Fantasy option if players are betting on his two or three touches a game resulting in multiple goal-line touchdowns.

Similar to the quarterback position, there is one running back with a guaranteed workload and a premium price tag while the rest of the options at the position carry a fair bit more risk. Barring injury, Andrew Harris will certainly have the most carries and receiving targets of any RB in the game but his efficiency has plummeted over the past two months while he has scored only one TD since Week 17. With only $30K to spend in playoff Fantasy contests, it’s difficult to imagine spending nearly a third of the cap on a player that has produced so little of late. Hamilton allowed near league average rates of yards (5.23) and TDs per carry this season, so the matchup doesn’t make him an obvious candidate for success either.

Since the loss of Sean Thomas Erlington in Week 4, the Hamilton backfield has been in a state of flux, with Maleek Irons, Jackson Bennett, Anthony Coombs, Cameron Marshall, and Tyrell Sutton all having games where they led the team in touches at the position. Even when the “starter” was certain though, it’s always been far from certain what the workload might be for that player on a given week as receivers like Brandon Banks and Bralon Addison have always chipped in a handful of carries on a weekly basis as well. Backup quarterback David Watford taking nearly every carry inside the five-yard line hasn’t helped any of the RBs value either. Cam Marshall is the likely starter at RB in the Grey Cup unless Tyrell Sutton makes an unexpected return and he comes in at a significant discount to Harris. However, his ability to reach value is nearly entirely touchdown dependant as he has one game of 3x value in Week 21 where he scored twice, but he reached less than 2x value with single-digit Fantasy point production in three of his other four starts this season. $5632 is a lot to pay for a player with a 7.7 Fantasy points per game average outside his Week 21 explosion especially versus the stoutest rush defence in the CFL that allowed the fewest yards per carry (4.52) and the fewest total rushing TDs (9) this season.

Given the wide spread of the work out of the backfield in Hamilton this season, it’s not crazy to consider playing one of the backup RBs at minimum salary – leaving salary to be spent elsewhere – and just hoping to luck into playing time or a TD. Anthony Coombs hasn’t received a carry since Week 15 but he continues to garner a couple of targets out of the slot each week and could certainly return 2-3x value if he breaks a big play or two as he did in the East Final. PPR points are a bit of help to his value. Maleek Irons, on the other hand, has had only three receptions since Week 16 but still gets occasional carries out of the backfield as a change of pace back. Both of these players carry the distinct possibility of handing Fantasy players a bland bagel on Grey Cup Sunday, but still, also offer enough salary relief to make them worth the gamble.

Everyone will want Brandon Banks in their lineup this week but it’s very few are likely to make it happen. He led the league in targets (158), receptions (116), yards (1550), YAC (657), and TDs (13), despite playing in just 16 games. No player was more dominant in 2019 regardless of position. Unfortunately, a salary that takes up nearly half of the cap makes it impossible to fit him in unless Fantasy players intend to leave multiple positions empty. His teammate Bralon Addison is a fine second choice as he had an exceptional season in his own right finishing fifth in targets (131), third in receptions (102), sixth in yards (1363), and second in YAC (616), while adding seven TDs. At about a 30% price discount over Banks, he is a much more affordable option while still maintaining the possibility of being the top-scoring WR on the slate. The handful of carries he gets out of the backfield each week only adds to his appeal. The rest of the supporting cast in the Hamilton receiving corps carries less appeal as Tasker is overpriced given his current role in the offence, while Jones has had only one game with over two receptions this season. Jaelon Acklin could garner some interest with a price tag just over $4K however as he has five games this season returning over 3x value at that salary.

The prospects of the Bombers receivers are still somewhat of a work in process. In many ways, the Bombers have been three very different offences this season with Nichols short passing game manager style being the hallmark of the first half of the year, followed by short passes and the lowest volume passing attack in the league led by Chris Streveler, and now an unexpected finale to the season led by Zach Collaros that has seen some receivers aDOT jump nearly 30% over mid-season rates. All this to say, trying to project Bombers receivers is a pretty tricky undertaking. If Darvin Adams’ rates are boosted to 2018 levels, he could project as a better per dollar value than either Banks or Addison. If, however, his rates are left at only a slight bump from 2019 rates he projects as a much less appealing option with single-digit Fantasy points. The rest of the Bombers slotbacks all project within two-tenths of a point of each other as they have similar market shares of targets and scoring rates, so it’s somewhat of a coin flip as to which might have a better shot at a TD, thus separating themselves from the pack. Bailey is the best per dollar option, but his having yet to score a TD while Lawler and Demski each have multiple receiving TDs this season means the latter two may be more likely options to get in the end zone.

If Fantasy players are looking for a low owned minimum priced punt option at WR, Janarion Grant could return 3x value in one play if he manages to take a kick or punt return for a TD. Hamilton hasn’t allowed a kick return TD all season, however, so he’s not a high probability play.

Both defensive units come in moderately priced for the Fantasy finale and are worthy of serious consideration given their scoring upsides. Hamilton and Winnipeg were two of the top options for average weekly scoring as they were both in the top four in the league in terms of sacks and forced turnovers. If Fantasy players are looking for a tie-breaker between the two units, it may simply be that Hamilton has a four-point higher implied team total in the game making the Bombers a more likely candidate to lose Fantasy points due to points allowed. The TiCats group is probably the better one to have on Sunday.

With Brandon Banks impossible to stack with Evans without leaving multiple positions empty, Addison is a fine pairing with his QB as the core of the most explosive offence in the league.

Adams aDOT has risen from just 10.3 to over 13 in a few short weeks with Collaros under centre as his big-play capabilities have again emerged in the offence with a more capable passer throwing him the ball. Hamilton allowed the second-fewest receptions of the 30+ yards this season though (18), so it’s certainly a contrarian play.