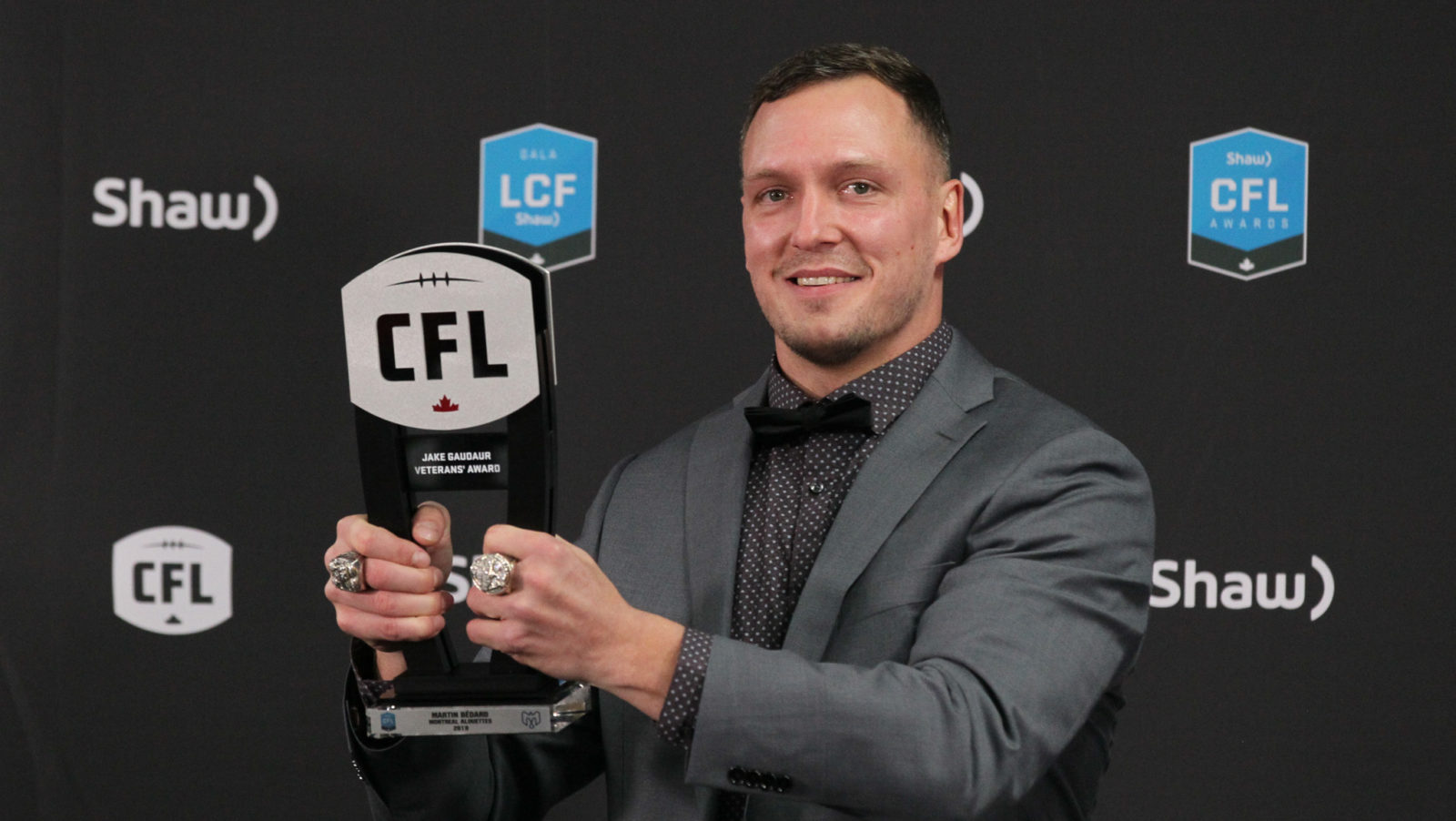 “Martin is an inspiration to his teammates, the City of Montreal and fans across Canada,” said CFL Commissioner Randy Ambrosie. “Beyond his tremendous performances on the field, he is a proud Canadian and an incredible ambassador for our league. His dedication to the community and his compassion for others, honour our nation’s veterans and serve as goals which we should all strive towards.”

Created in honour of Jake Gaudaur – a distinguished Second World War veteran and the longest-serving Commissioner in CFL history – the award recognizes a Canadian player who embodies the attributes of Canada’s veterans and the ones held by its namesake: strength, perseverance, courage, comradeship and contribution to Canadian communities.

“Congratulations to Martin Bédard on receiving this year’s Jake Gaudaur Veterans’ Award,” said the Honourable Lawrence MacAulay, Minister of Veterans Affairs and Associate Minister of National Defence. “Canadian Veterans have shown tremendous resiliency, comradeship and strength as they served our country and Martin Bédard’s dedication to his community shows that he embodies these characteristics on and off the field.”

Bédard has overcome personal tragedy on his path to becoming a CFL player. Cancer claimed the lives of both his parents before robbing his brother of the use of his legs. Despite the adversity, Bédard draws strength from his loss, and has become a pillar of support on and off the field. His leadership, character and work ethic have earned him the respect of his teammates and coaches. His positivity and personable nature have endeared him to the Alouettes and its front office.

“My parents taught me to be a good person and to be kind to others and that’s what I’ve tried to do for my whole life,” Bedard said after being presented with the honour. “I wasn’t the nicest kid, but I grew up experiencing things. It just made me realize that being good is the best thing.”

Now in his 11th year with Montreal, Bédard’s greatest impact can be felt in the community. He serves as the ambassador for the Together at School with the Alouettes program to encourage youth to stay in school. Outside of team commitments, he visits youth centres and minor football teams to share his message of perseverance. He regularly spends time at the Manoir Marc Perron to connect with its elderly residents and those with disabilities. In 2013, he traveled to Kuwait and Afghanistan to visit Canadian troops. Bédard’s service to others is born out of a sense of responsibility as a professional athlete and a desire to give back to his hometown.