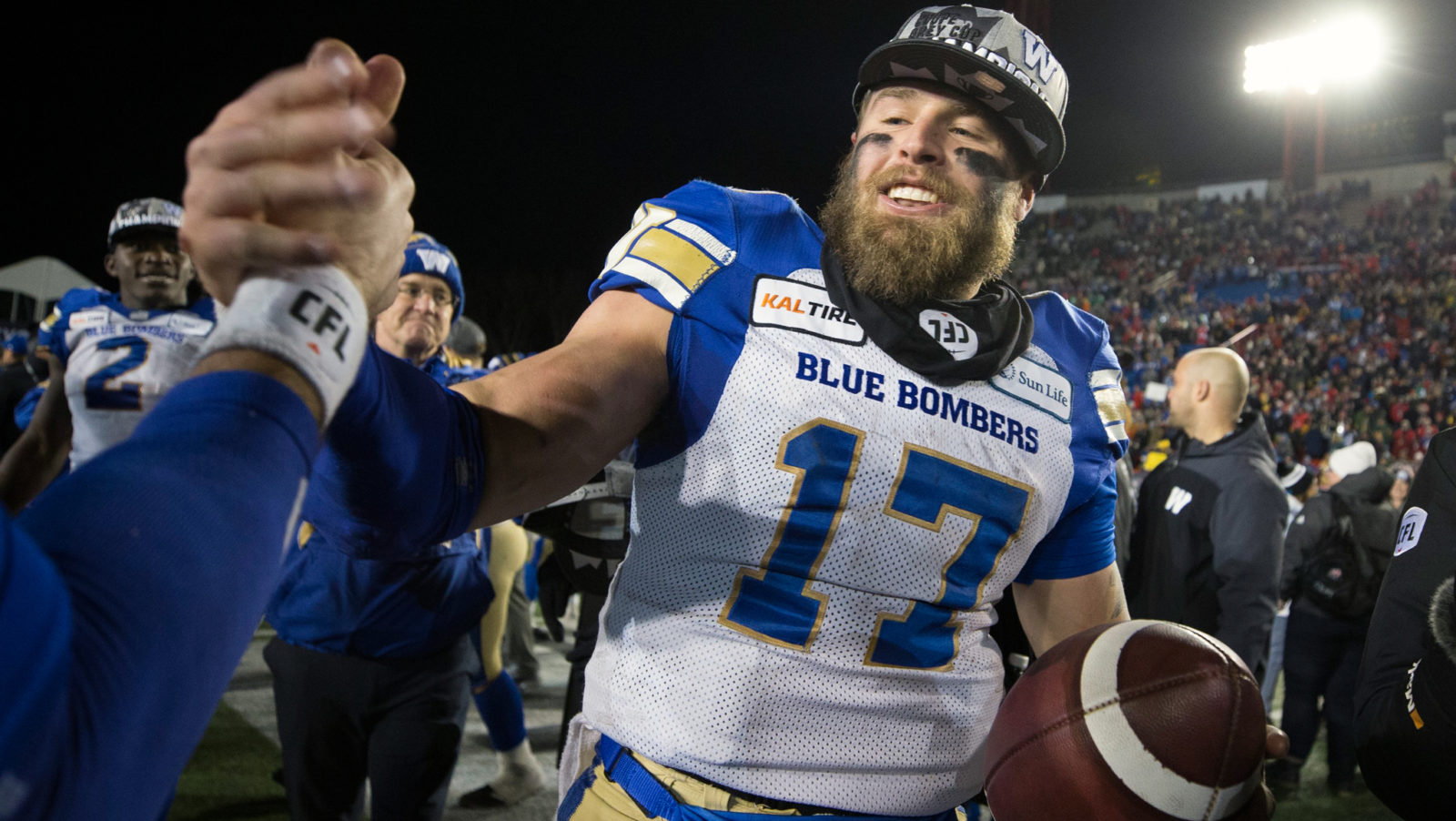 With 2019 drawing to a close, many people reflect on the year that was — heck, the decade that was — while devising ways to make the coming 365 days a more productive and healthy time in their lives. I am not one of those people. As I write this, I’m putting back some eggnog in a glass that screams you should not be drinking this much fatty dairy in one sitting.

So in the spirit of greed and decadence, I have put together my wishlist for the 2020 CFL off-season. Here are all the free agent moves I would like to happen, a crazy plan for Hamilton and a bigger picture player contract wish. Oh, spoiler alert, this list will NOT include Atlantic expansion. I’ve written about that one plenty, no need to rehash it here.

I want Stanley Bryant to move on to the BC Lions.

I’m sorry Winnipeg Blue Bomber fans for doing this to you but hey, you just won the Grey Cup in such impressive fashion you can handle a bit of loss (but I do hope you can find a suitable replacement for Paul LaPolice). The Lions have one of our greatest football treasures, Mike Reilly, and he needs to be protected at any cost.

In a year where BC gave up a league worst 58 sacks, it is no coincidence that Reilly had his least productive season since 2015 when he was limited to 10 games with Edmonton. As the West representative for top offensive lineman the last three years, Bryant would certainly help get Reilly back to MOP form.

I want Reggie Begelton to stay in Calgary!

I know it’s not like the Stampeders need any favours, but I like the idea of Bo Levi Mitchell having such a dangerous threat on his side. Begelton lived up to the potential we all saw in his brief moments of action late in 2018 by finishing third with 1,444 receiving yards and 10 touchdowns.

Due to injuries and roster turnover, Calgary has gone through a revolving door of receivers. Eric Rogers is damn good (1,080 yards, 10 TD) and there are some promising targets in Hergy Mayala and Josh Huff, but I want at least one more year of Mitchell going deep to Begelton.

I want Dominique Rhymes on the move … maybe.

Before the news that LaPolice was the new head coach for the Ottawa REDBLACKS, I was about to start a #FreeRhymes social media campaign. Ottawa went through such a tough year at quarterback with Dominique Davis, Jonathon Jennings and Will Arndt each throwing over 100 passes, yet Rhymes still managed to go over the 1,000 yard receiving mark.

Yes, there are parts to his game that Rhymes needs to work on, but I want to see what he looks like playing in a situation with quarterback stability. Now, if Coach LaPolice can work some magic in Ottawa, then maybe I’ll rescind this wish.

I want Willie Jefferson to stay in the CFL.

This is far and away my most selfish desire. Jefferson was the best player in the Grey Cup and arguably the best player all season. I am fully expecting him to be in a NFL uniform, there are 32 teams that could use his ability to get to the passer.

Is there any way Justin Trudeau can divert some money to make sure he never leaves? We rightfully invest in the arts so why not invest in Canadian pass rush? Come on Justin, you have a minority government and I read there may be some pockets in Western Canada that don’t exactly have a 100 per cent approval rating for you.

I want Shaq Evans to stay in Saskatchewan.

My desire for Begelton to remain in Calgary is more of a guilty pleasure as Bo Levi Mitchell is an established star in this league. But Evans’ presence and his 1,334 receiving yards can only help the continued growth of one of the biggest breakout stars of 2019, Cody Fajardo (yes Hamilton, Dane Evans is at the top of this list as well). Fajardo burst onto the scene with that 360-yard, two-touchdown game against Ottawa and there was Evans catching seven of the eight passes thrown his way for over 100 yards and a score on that night.

Much like in Calgary, the Roughriders boast receiver talent in Kyran Moore and Naaman Roosevelt, but it’s Evans that gives Fajardo that ultimate deep threat. Shaq had four 150-plus yard games, including that crazy 193-yard performance against the Bombers.

I want pure chaos at quarterback in Hamilton.

So here is my crazy vision for 2020. Zach Collaros returns to Hamilton on a one-year deal and exorcises his demons of 2015 as the Hamilton Tiger-Cats win their first Grey Cup since 1999. Follow me here. The Winnipeg Blue Bombers decide they don’t want to give up a first round pick to Toronto so they elect to not bring him back. Hey, they did plenty of winning with Matt Nichols and Chris Streveler so they go back to that quarterback duo. Hamilton gives Jeremiah Masoli the biggest going away party, something suitable for the 2018 East Division’s Most Outstanding Player. Masoli goes off to Ottawa to hook up with LaPolice and help rebuild the REBLACKS’ offence while mentoring their young quarterbacks.

Speaking of mentoring, Dane Evans is only 26 and who better to impart some football life lessons than Collaros? That guy has seen everything. Collaros guides Hamilton to the championship, fulfilling his Tabbies destiny, Barton Street rejoices, and after all the sparkling wine has been consumed, Collaros goes on his way, his mission accomplished and hands the starters reigns back to a wiser Dane Evans. This is win/win in every possible way.

I want Jason Maas to kick ass as the new offensive coordinator for Saskatchewan.

I’ve been hard on Maas in the past but I am genuinely rooting for him to help the Roughriders hit another level offensively. He has had success as a coordinator with the Toronto Argonauts in 2012 and was part of the Ottawa staff in 2015 that led the league in total yards, passing yards and rushing touchdowns with Henry Burris at quarterback and more 1,000 receivers than you could shake a stick at. Here’s hoping for fewer attacks on Gatorade containers and headsets and more deep attacks on opposing secondaries.

I want Chris Streveler to win the Grey Cup.

Frankly I don’t care what team he is on, just make sure he is on the winning team at the end of the season. I want more Streveler celebrating videos, pictures and GIFs in my life. The guy could be the Alexander Ovechkin of the CFL.

Why stop at two years? How about players signing for three or more years with a team? The Argonauts signed Bear Woods to a two-year deal while Calgary inked defensive lineman Derek Wiggan to a two-year contract as well. As much as I revel in the maelstrom that is CFL free agency — we always love the sports transaction news — a little bit of peace wouldn’t be the worst thing.

Do you know how hard it is to keep up with all the news? Also, bigger picture, it is easier for fans to fully invest in a player if they knew that said player was going to stick around for more than just a single season.

Thanks for reading and I hope the holidays, however you celebrate them, are filled with joy, friends and family. Enjoy the final days of 2019 and I look forward to being able to cover this wonderful league in 2020.