Remaining the Same: Ticats hoping continuity brings them the Cup 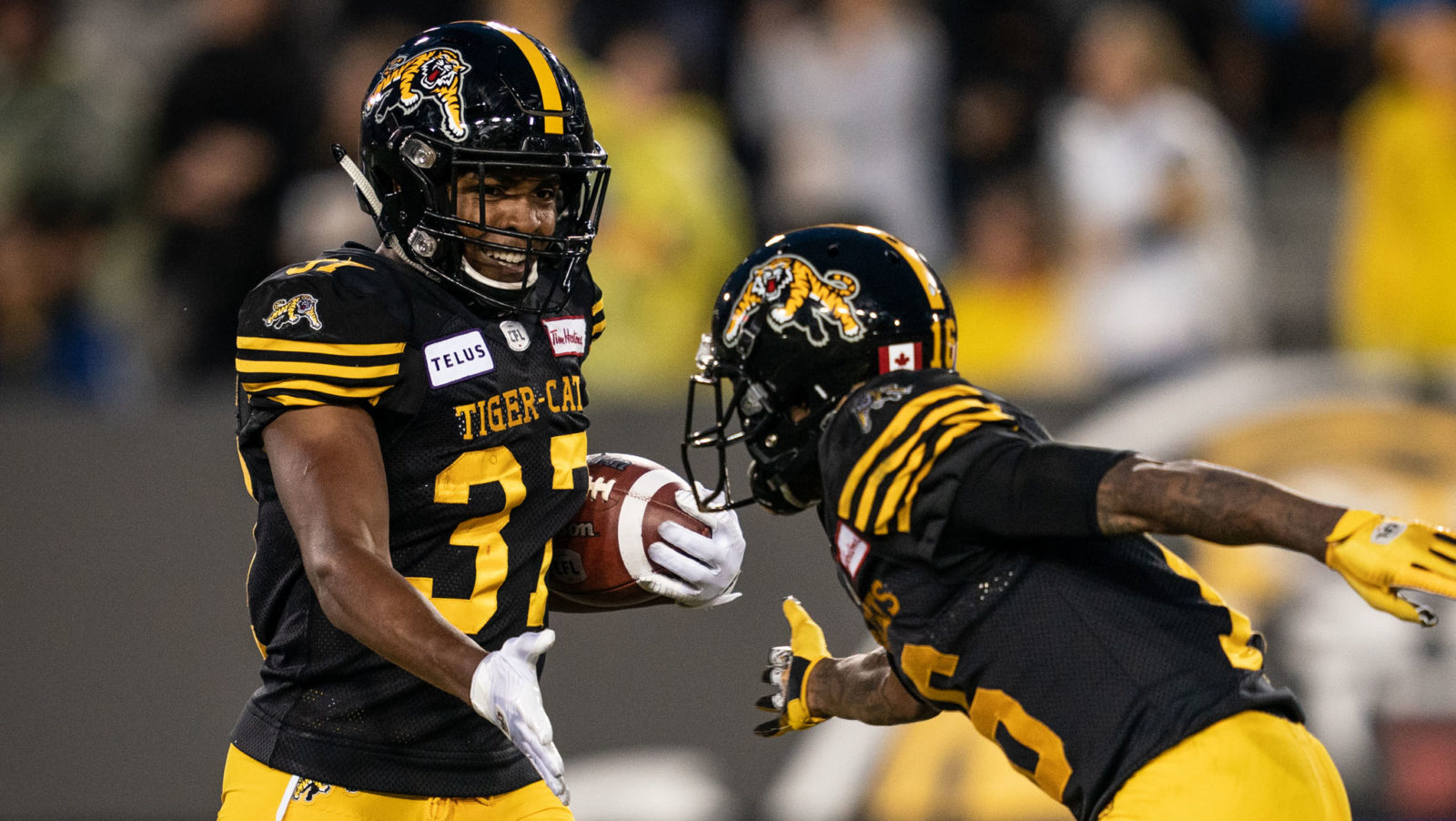 Remaining the Same: Ticats hoping continuity brings them the Cup

CFL.ca presents ‘Off-Season Depth Chart’, a series of articles reviewing every team’s depth chart as it stands to date.  Note that these are not official team-issued depth charts, but projections based on insight and analysis from around the league. Additionally, 2020 Draft picks are not included.

HAMILTON — After making it all the way to the championship game last season, it made sense that the Hamilton Tiger-Cats didn’t change much on their depth chart.

Most of the starters who were in the 107th Grey Cup presented by Shaw will return on both sides of the ball in 2020, as the team hopes for a repeat their league-best record (15-3).

The biggest question for the Tabbies heading into training camp will be who starts the season under centre. After a devastating knee injury sidelined Jeremiah Masoli and backup Dane Evans took the black and gold all the way to Calgary in late November. Masoli’s health will determine if he indeed leads the way in Week 1 or if it will be the youngster Evans instead.

Hamilton locked up the majority of their big-name free agents before they even hit the open market in February, including Dylan Wynn, Ja’Gared Davis and Ted Laurent and a few key pieces in the secondary including dynamic DB/returner and 2019’s Most Outstanding Special Teams player Frankie Williams.

That continuity will be key for the Tabbies as they eye heading back to the championship game in November. 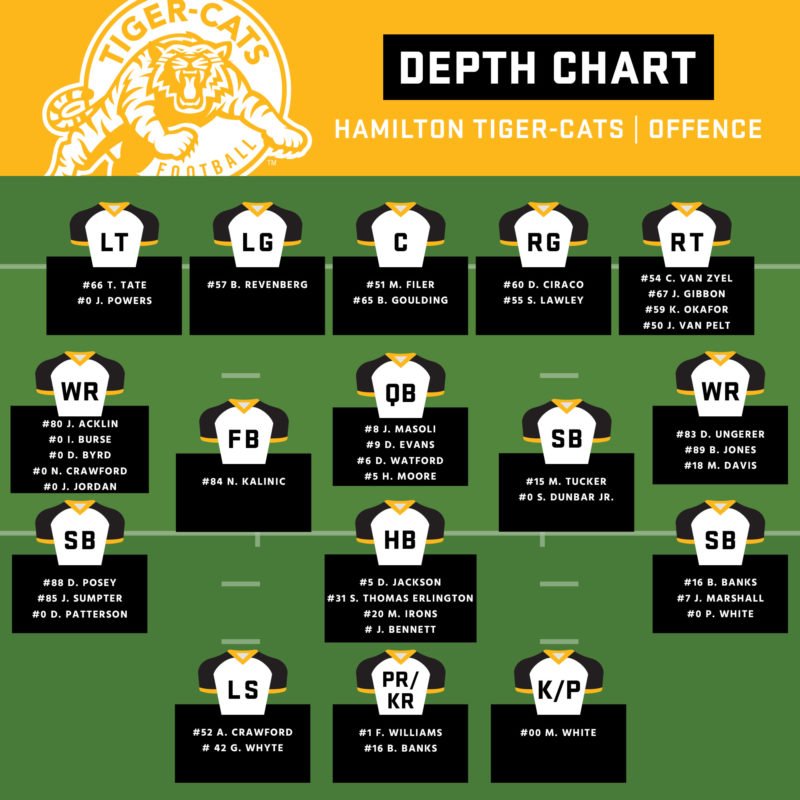 The Ticats have the luxury of going with four Canadians in the trenches, providing a lot of flexibility on the rest of the roster. The only change for Hamilton is at left tackle as they will need to find a replacement for Ryker Mathews, who left for the Lions in free agency. They could go with an American at that spot, like Trevon Tate, or they could move Chris Van Zeyl over from right tackle. That would free up Jesse Gibbon to start at right tackle and provide an All-Canadian offensive line. That being said, we’ll have to wait until camp opens to see how the o-line completely shakes out.

As we saw last season, the Tiger-Cats used a number of tailbacks in their backfield. After Sean Thomas Erlington’s season-ending knee injury, they used the likes of Maleek Irons, Jackson Bennett and even Bralon Addison at times to take handoffs. With Thomas Erlington on the mend, Hamilton could go all-Canadian at running back. However, the addition of Don Jackson during free agency changes things. Jackson is a proven starter, and it’s likely that offensive coordinator Tommy Condell could give both Jackson and Thomas Erlington equal touches this season.

The Ticats had a few holes to plug at receiver after Bralon Addison left for the NFL and veteran Luke Tasker remains unsigned. DeVier Posey was the biggest addition at the pass-catcher position, and will add to a group that already has 2019’s MOP, Brandon Banks, and emerging star Jalen Acklin.

As mentioned, the extension of Williams was key for Hamilton’s special teams unit. They do, however, have a need at kicker. Lirim Hajrullahu left for the NFL this off-season and perhaps the team is waiting to see if he returns to the CFL before they pursue another option. If not, it looks like Matthew White is the guy for the job. 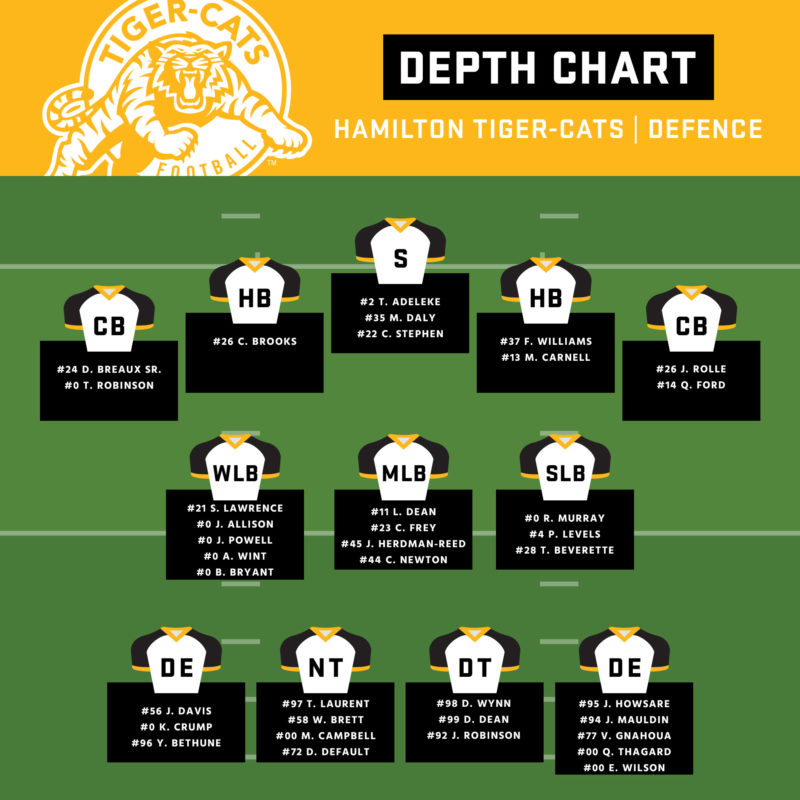 Defensively, almost all of the Ticats starters who suited up in the Grey Cup last year return.

In the secondary, Williams will likely switch from field corner to field halfback after his impressive campaign last season and to replace Richard Leonard, who left for Calgary as a free agent. That leaves Jumal Rolle to fill in at field corner, backed up by former Argonaut Qudarius Ford. Nothing changes at safety for the Ticats, other than the addition of Courtney Stephen, who returns to the Hammer following a single season in Calgary. On the boundary, shutdown corner Delvin Breaux and halfback Cariel Brooks remain.

Linebacker Larry Dean makes his return to Hamilton as well and will take his spot at MIKE, while Simoni Lawrence will patrol the outside at WILL. The SAM linebacker spot is where things could get interesting for the Tabbies. Rico Murray was the starter at SAM last season but with the addition of Patrick Levels, there could be an open competition in camp for who assumes the starting role. Whoever dresses as the backup will most likely play on special teams and will be available to back up SAM and the boundary halfback.

Hamilton’s defensive line that accumulated 54 sacks in 2019 remains intact heading into 2020. Davis, Wynn, Laurent and Julian Howsare were all set to become free agents on February 11 but the quartet put pen to paper before their contracts expired.

With their almost completely unchanged roster, the Ticats will look to repeat their trip to the Grey Cup and will hope that this time they will be the ones to walk away with the coveted trophy.