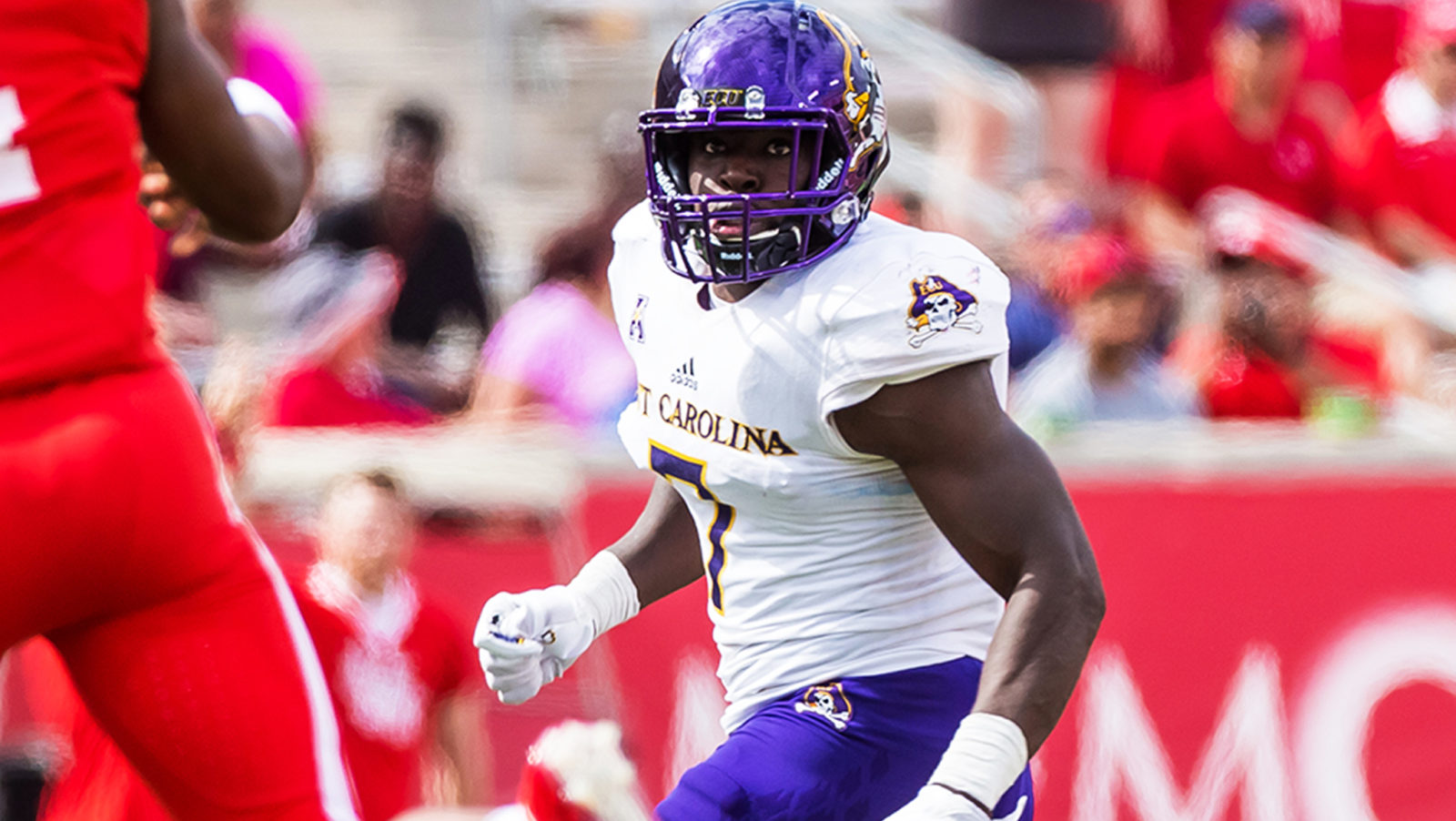 Thanks to their draft day trade with Calgary late last month, the BC Lions made one of the biggest moves of the off-season. By moving up two spots to number one, the Lions made a significant investment in top pick Jordan Williams. But they’re not the only ones invested in his career, because Williams has done a great deal of betting on himself over the last year.

Williams was the odds on favorite to go number one heading into the 2020 CFL Draft, and for good reason. The former East Carolina linebacker tested off the charts at the Ontario Regional Combine and had an impressive college career. Additionally, he was deemed by many as the player most ready to step in and make an immediate impact.

The investment made by the Lions is easy to see. They made the trade and used their top pick on Williams. What they’re getting is a guy who’s been making important decisions and playing the long game for the good of his career. The last year or so hasn’t been easy for Williams, but the best things can sometimes be the most difficult to achieve.

If you’re not familiar with Williams’s story, I’ll give you the condensed version. After finishing his college career at ECU, Williams had some NFL looks before finding his way to Ottawa. Upon divulging the fact his mother is Canadian, the option to qualify as a national player was presented to Williams. That’s where the investment really began.

Because he found out about his newfound status late, Williams wasn’t eligible for last year’s draft. As such, he had to sit out the entire 2019 season while sorting out his dual citizenship and ensuring eligibility for this year.

Sitting out an entire campaign is hard enough. For Williams, though, it had to be that much more difficult knowing he didn’t see any game action in 2018, either, while exploring NFL opportunities. Williams’s last competitive game was his final one at East Carolina, which was in late November 2017. Deciding to willingly sit out another year would have been anything but easy. For Williams, though, it was worth it for his long-term future.

“It was very difficult,” Williams told me leading up to April’s draft. “But, when I saw the politics of the situation…football as a career is not a secure job, that’s just straight cut. But you get more security playing as a national, and I feel like if I want to play this game long term, I might as well go and do this. It’s going to be an investment and I invested in myself for this opportunity. That’s how I looked at it, it wasn’t too hard per se, but looking at it as an investment…I hope it pays off.”

The story sounds somewhat familiar to that of Alex Singleton, now of the Philadelphia Eagles. The similarities are all there: linebackers, late Canadian eligibility, first round picks, etc. It’s a story Williams knows well.

“I’m very familiar with him,” Williams said. “I don’t know him, but I had a former (teammate) at East Carolina, (former Stamps DB) DeShaun Amos, and I used to watch his games. When I watched his games…I saw a guy…flying around the field. And I was like: let me look this guy up. I saw his story, he was on a practice squad and was like: you know what, let me enter the draft. I see the parallels there.”

The Lions will be thrilled if Williams works out anything like Singleton did in Calgary. The biggest problem now is the uncertainty of when the 2020 season is going to start. Williams hasn’t played a competitive game in more than two years, and yet, is still finding ways to be patient.

“I feel like, as an athlete like myself, I don’t worry about the things I can’t control. That’s the one thing I’ve learned through this past year. I look at it everyday like tomorrow is going to be it.”

Each tomorrow brings us closer to football returning. When it does, I’m jacked to see how these investments, both by BC and Williams, end up paying off.

We’re focusing on special teams as we continue our 2020 Money List. It’s a list made up of the best players at their position if we were building a team to win a championship right away. Here’s what we’ve got so far:

Ward’s sophomore season wasn’t as impressive as his record setting rookie campaign. In fairness to Ward, though, living up to the standards he set in 2018 was going to be ridiculously difficult. Still, Ward put together a solid second CFL season and has established himself as one of the most accurate kickers in the game.

We all know what Ward did in 2018. He set new a new pro football record with 48 consecutive field goals and set a new league mark with a success rate of 98.1%, shattering the previous record by more than four percentage points. Yeah, doing that again a year later was going to be tough.

Ward’s sophomore season saw him hit 86.0% of his field goals, which was good for fourth in the league. And, don’t let the overall percentage fool you. Ward was perfect in his first 21 attempts last season before finally having a couple rough games in the second half.

To do what Ward has done in two CFL years is bonkers, despite a dip late in 2019. This guy gives you the feeling he’s going to make every single attempt with how robotic he is in his approach. That’s the kind of guy I’d want kicking important field goals on a championship team.

Medlock has made this list before as a kicker and, now a Grey Cup champion, was in the mix again this year. But let’s give one of the greatest special teamers in CFL history a little love for the other thing he does so well: punting. It’s fair to say Medlock is better known as a kicker, but his punting work has, and continues to be, elite.

Medlock’s 2019 season was outstanding. With 106 total punts, only three players at the position were busier. That’s why it needs to be underlined that Medlock finished the year with just one safety. That’s an easy, yet rudimentary, indication of his accuracy and ability to pin opposing returners deep.

But where things really get impressive is when you take a deeper dive into the numbers; or, in Medlock’s case, outside the numbers. No one was more proficient last season punting outside the numbers than Medlock, which really starts to emphasize how effective he is. Receiving a punt so close to the sideline makes it significantly more difficult on opposing returners. 66 of Medlock’s 106 punts went outside the numbers, which was by far the league’s best total.

Combining how well Medlock punts to the outside with his lack of safeties gives you a much better idea of accuracy and effectiveness. In a game so reliant on field position, Medlock has been doing this for years. It’s good to be able to recognize one of the best ever.