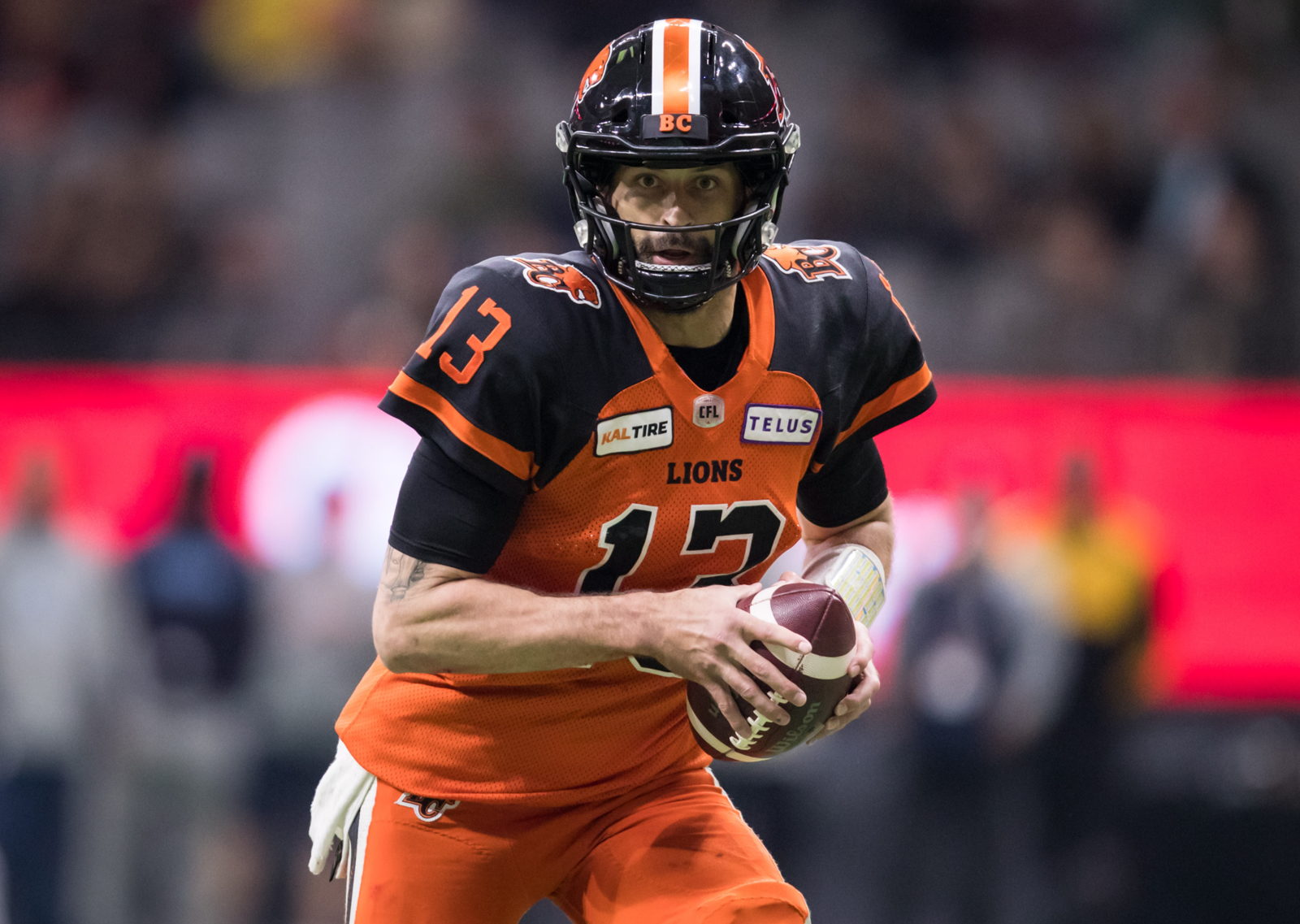 Most coaches, well, at least the more humble ones, will be quick to remind observers they are only good as the players they have at their disposal. We present you the case of Jordan Maksymic. Heading into his first season as Lions offensive coordinator, the St. Albert native has done a fine job of carving out his own path in the coaching ranks. More on that later. For now, we present a breakdown of the quarterback situation Maksymic is inheriting on the west coast.

The new offensive coordinator would be the first to tell you he owes a lot of his success in the coaching ranks to Mike Reilly. Maksymic served as Edmonton’s quarterbacks coach from 2016-18 when Reilly led the CFL in passing each in each of those years while also winning the league’s Most Outstanding Player award in 2017.

“He’s made me a pretty good coach for a number of years and he’ll continue to do so,” Maksymic told bclions.com.

“Just being familiar with the language that we’re talking with, plus a lot of the schemes; I know that he’ll continue to have some of that success we had together. I’m looking forward to being back on the field with Mike.”

And with that, we do our best to break down the Lions’ quarterback situation as preparations continue for a shortened 2020 campaign. 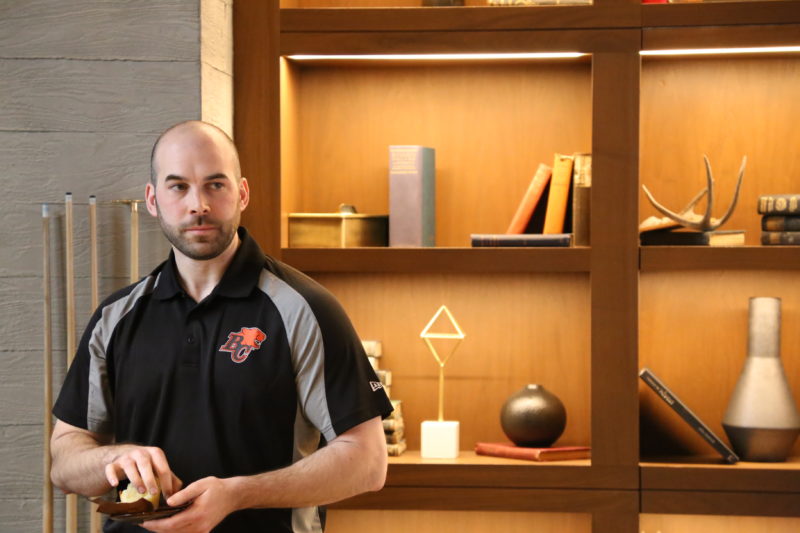 The Quarterback Room: It All Starts With Mike..

Should play wind up resuming in September and we get the quick eight or nine-game sprint to the Grey Cup that we’re hoping for, that shortened season template could work to the Lions’ advantage. A lot of that has to do with the quarterback room.

Reilly turned 35 in January but can still call himself one of the league’s very best at his position. Despite missing essentially three full games at the end of 2019 with a  broken wrist, he finished just 405 yards shy of Cody Fajardo for the CFL passing lead.

Maksymic can’t wait to help Reilly be even better in 2020 and beyond.

“He’s the best that there is,” Maksymic proclaimed.

“We had our three years in Edmonton, had some success and established a pretty good personal relationship. Being back with him is something I’m really looking forward to.”

Before members of the organization along with the rest of the world were forced into self-isolation, Reilly and Maksymic were involved in regular meetings at the club’s facility in preparation for camp. It didn’t take long for the duo to re-establish some of that chemistry required to build both a playbook and a plan of attack for the offence.

“It was great. The nice thing is that you can skip the pleasantries, so to speak,” Maksymic explained.

There is no ‘get you know ya’ period or anything like that. We were able to dive right in and get back into talking football and kind of re-hashing some of the things we did in Edmonton and working on some of the new things we want to implement in this offence in 2020 and beyond.”

Having number 13 behind centre assures the Lions will have a chance to win on any given day. The offseason circus has also brought a couple of interesting additions behind Reilly on the quarterback depth chart… 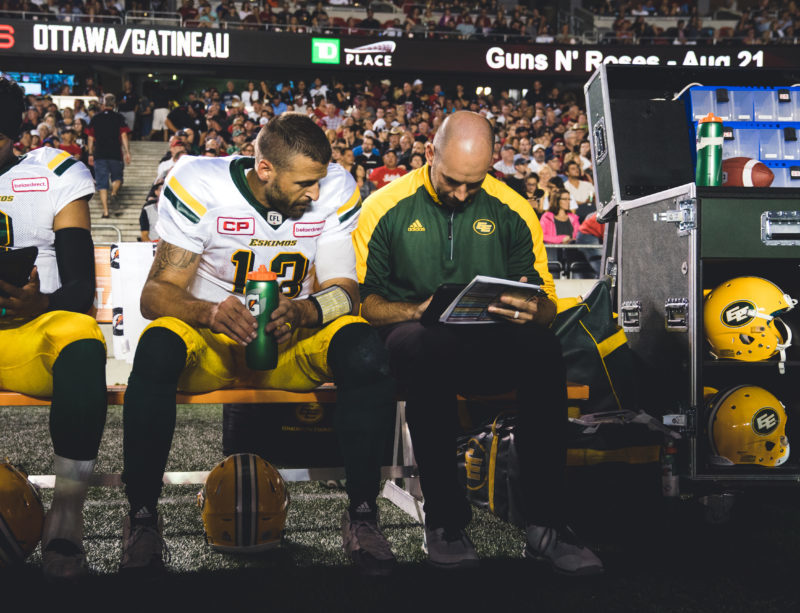 ‘Will’ A Canuck Come Knocking?

With Danny O’Brien now serving as an offensive assistant to Maksymic and Grant Kramer recovering from a torn ACL suffered the week after Reilly went down, GM Ed Hervey and head coach Rick Campbell needed to go out and address the depth chart behind Reilly in what has been a busy offseason. Late January saw the addition of Will Arndt, previously a member of the Ottawa REDBLACKS.

The Lions then made headlines during the April 30th CFL Draft by selecting Victoria-born Nathan Rourke out of Ohio University with their second round selection.

Arndt has experience as a starter after taking over for a struggling Jonathon Jennings in the nation’s capital. He threw for 940 yards and three touchdowns for the struggling REDBLACKS last season.

“I scouted Arndt as a free agent when I was in Edmonton so I am definitely familiar with him,” Maksymic said.

“He got some valuable reps throughout last year in Ottawa so that was good to see him on film. It’s always good to have a more veteran guy somewhere on your roster like Will who has now been in games and gotten some live reps. He can come in there in a backup role if need be.”

And while Rourke no doubt presents a pretty cool CFL story after basically re-writing the record books at Ohio, Maksymic and the entire brass would rather focus more on his ability as a quarterback than simply getting excited about his birth certificate.

“We were definitely thrilled to get him,” Maksymic said of Rourke.

“We loved what we saw on film and what we heard from him directly in the pre-draft meetings. I’m glad that he was still there when our second round pick came up. He wants to dive right in and learn this offence as best he can right away. We’ve been in constant communication with our quarterbacks and he’s doing a great job of picking up the offence. He’ll be ready to go and compete at a high level whenever we do get to training camp.”

We’ve seen more and more pro offences utilize a second quarterback into some of their schemes. Look no further than the Grey Cup champion Winnipeg Blue Bombers and what they did with Chris Streveler. All the more reason to be excited whenever the green light flashes for the beginning of camp.

Prior to camp being postponed, the Lions were wrestling with what other quarterbacks to keep on the Kamloops roster. The others signed before camp were as follows: Kraemer, Ricky Lloyd, Vinny Testaverde Jr. and KJ Carta-Samuels.

It remains to be seen what kind of reductions to the quarterback depth chart and other positions will occur in the event camp begins in August or September. 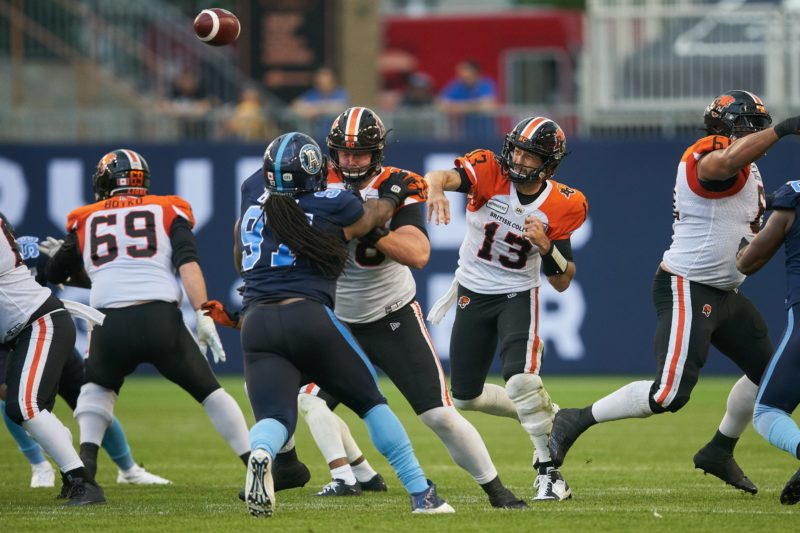 From St. Albert To Offensive Coordinator

He didn’t take the most clear path to an offensive meeting room, but Maksymic knew from the time he was a high school quarterback he wanted to pursue a career in pro football.

His neighbour growing up just outside of Edmonton was none other than Tom Higgins,  Grey Cup champion head coach of the 2003 Eskimos. After Higgins moved down the road to Calgary, he invited Maksymic to attend 2007 training camp as a Stampeders water boy. That foot in the door that went a long way.

“It was just supposed to be kind of a summer gig and then I just really fell in love with it. Being in the equipment room, the locker room and hanging around the players was a thrill for me at that point in my life,” he recalls.

“What really made me love it was hanging around the coaches offices and sitting in the back during meetings. Just seeing all of the work that they did and everything that went into the preparation really hooked me in. That’s when I knew this was the path I wanted to take.”

Maksymic became the Stampeders video assistant for two seasons before spending 2009 and 2010 as a graduate assistant with Northern Arizona. After his first stint with the Eskimos from 2011-13, he joined Campbell’s REDBLACKS as offensive assistant and running backs coach for two years before landing back in the Alberta capital with Reilly. He was promoted to Eskimos offensive coordinator for the 2019 season.

Now he and Reilly will aim to re-kindle the magic and get this team back to where it belongs: the Grey Cup.

“I wasn’t here so I can’t speak to much of it but talking with him and some of the other guys, they’re eager to put it (last year) in the past and they’re full speed ahead on 2020. They’re looking forward to hitting the field and proving what type of football players they are.”