O’Leary: Chris Cuthbert on his Top-10 calls and a career behind the mic 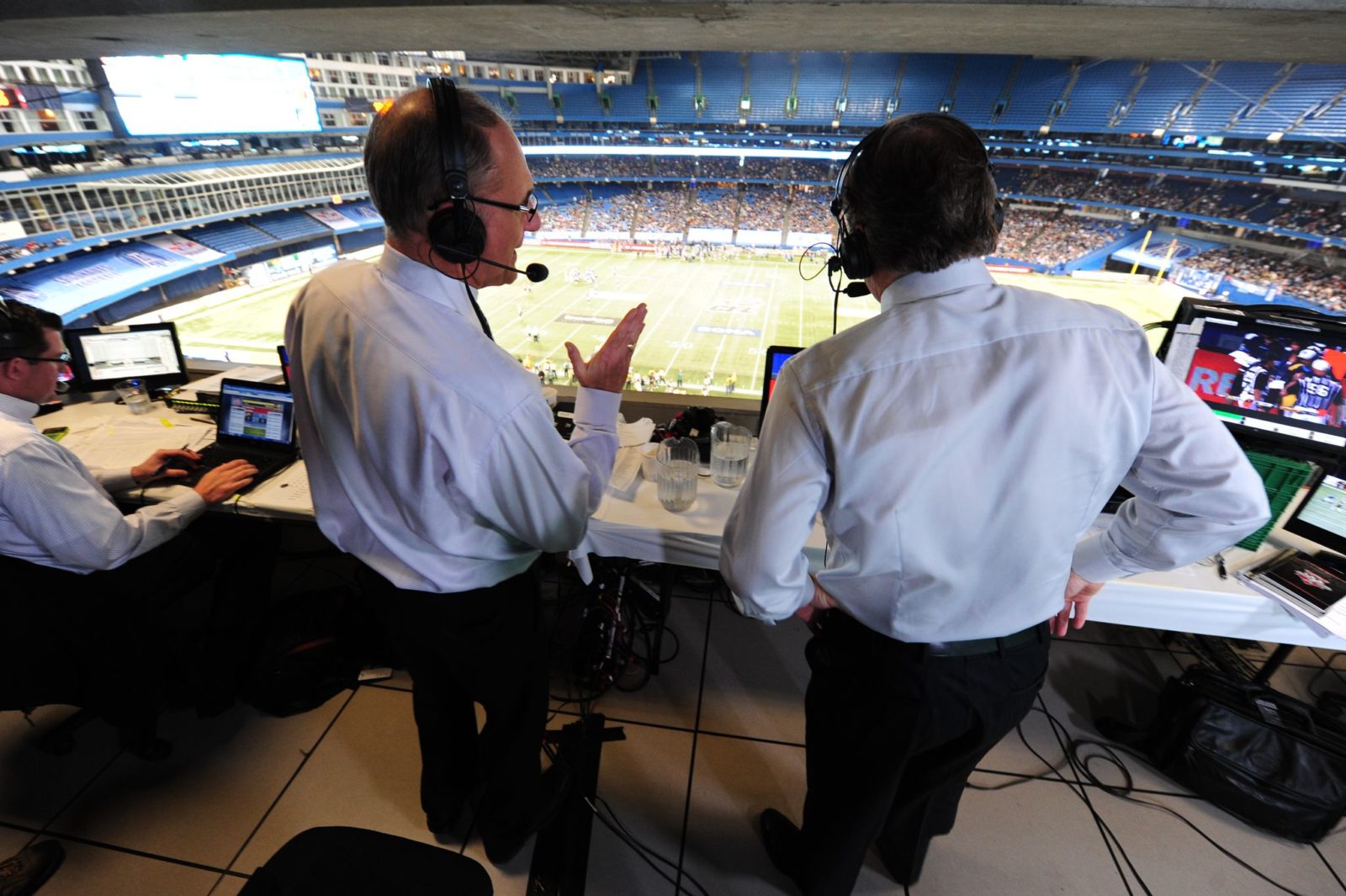 O’Leary: Chris Cuthbert on his Top-10 calls and a career behind the mic

As he made his way through his daily two-hour morning walk, Chris Cuthbert had plenty of time to think about the request made of him.

After touching on the topic a little this past week on The Waggle, we asked TSN’s play-by-play man what the Top-10 calls of his career would be. Cuthbert strolled from his home in Georgetown, Ont. out into a nearby rural area and thought about his career. The walk is a new routine, a positive change sparked by the pandemic. A short stroll one morning turned into him getting lost in the country and enjoying finding his way back. He’s been doing it every morning since.

“I can’t run anymore. My knees can’t take it,” he said. “But going on these long walks is kind of getting me through the mornings.”

The No. 1 spot — Sidney Crosby’s golden goal at the 2010 Olympics in Vancouver — is the easy one. Then it gets complicated because over the last 35 years of helping bring Canadian sports into your living room, Cuthbert has seen some things.

“I thought about (a Top-10) and I thought, ‘That’s impossible,’” he said, with a bit of a laugh. “I was even going to come up with 10 categories for you. If somebody asks me tomorrow I might give them nine different ones.

“We could do a Cup category and a playoff category and individual records and a no-lead-is-safe category, NHL overtime and historic moments. There’s a lot of them. On the walk today I was thinking of stuff…certain games popped into mind that nobody else would even know about, but that kind of stick with you after all the years, or start coming back to you after all the years.”

We eventually got to a complete list (skip to the bottom to see that), but the conversation that got us there was a lot of fun and a good look at how arguably the best voice in Canadian sports is able to do what he does so well. Our interview has been edited and condensed.

RELATED
» CFL Game in 40: Game of the year
» Esks’ Tuggle: I’m really trying to raise the bar
» O’Leary: Win-and-host could suit the Ticats

Chris O’Leary: Let’s start with the No. 1 moment. It has to be the Crosby goal, right? I know it was the 10-year anniversary this year. A decade later, what stands out to you with that call, that play, that game? That was something that in the moment was felt across the country.

Chris Cuthbert: It was probably the greatest match-up that lived up to the hype. We hope for games like that and it exceeded all of my expectations. It was a great game, just a great finish and if it would have finished after 60 minutes I would have really been pleased with the game and the call, but (Zach) Parise scoring late in the game to tie it and take it to overtime made that an epic game and made it even more special memory for everybody that was cheering for Canada that day.

The atmosphere in the rink was like none other I can remember. I’ve kind of joked, for football fans it was like Mosaic indoors, Mosaic on steroids. That day was just wild and there is a little football connection to that.

The flag that Drew Daughty waved after the game was from a super fan from Regina, the late Dave Ash. He was an original Gainer mascot.

A million memories. It was a noon game and I didn’t sleep the night before and I was getting a little punchy in the overtime intermission. I was just trying to stay alert, playing mind games with myself and at one point I said to myself, ‘Boy, if this was soccer, the next goal would be the golden goal.’ And that was a little bit of a eureka moment for me. I kind of went, ‘Wow, I like that. I think we’ll be using that.’

CO: I was covering a women’s playoff basketball game that day at the University of Alberta. As soon as the game ended, I remember the players taking their seats from the bench and moving them onto the court to watch the overtime. There were maybe 100 people in the gym, all watching on the big screen and the place just went up when Crosby scored. You could feel the whole country celebrating as it happened.

CC: I remember very shortly (after the goal), I was not on Twitter at that point so I was in a bubble myself the whole time. You knew everybody was always watching and captivated by everything that was going on, but I still had removed myself a little bit from it. I remember my phone went off or shortly after the goal and my first text was from one of my nieces who I hadn’t really associated with a real avid sports fan and then she texts me she said, ‘This is like a fairy tale.’

As I started getting the reaction, I realized that this was a lot like how I was reacting as a 15-year-old in ’72 when Henderson scored. I remember cringing when the first comparison was made because for anybody that was old enough to live through that, there isn’t another moment that is quite the same. But as I started to digest the moment and even now I think it’s certainly this generation’s Henderson moment, which is pretty cool.

“The atmosphere in the rink was like none other I can remember. I’ve kind of joked, for football fans it was like Mosaic indoors, Mosaic on steroids.”

CO: How many Olympics have you done?

CC: I think 2018 was my 10th or 11th Olympics, I can’t remember now. I started in ’88 with Calgary and Korea and did ’92, ’96. Ninety-six is another category. I did Canada’s rowing team and everyone was dream teaming and I called our rowing team the dream team because they won a gold, four silvers and a bronze at that Olympics and there were some pretty remarkable athletes and performances that were memorable.

CO: Out of all of those experiences, which sport was the hardest to call?

CC: Well, I’m not a great race caller. They’re all similar I think because for me they were all sports that I had to really study and learn about. Whether it be ski jumping in Calgary. The gymnastics was a three-ring circus in 88 and it’s still one of my proudest moments. We covered it live with I think three people at our podium. The table next to us, NBC was doing it on tape with about 16 crew members. I was thinking we were going live flying by the seat of our pants and it was pretty memorable stuff.

They’re all challenging and those sports you didn’t grow up with are the most difficult. CBC was very good, when they selected you to do a sport they helped immerse you in it. I remember getting chosen to do figure skating and I was sent to the Europeans in Bulgaria with Toller Cranston and that was a week of figure skating 101 and it became an advanced course when you spend time with him. And then Barb Underhill and Paul Martini, to learn from those people, to do events leading up to those Olympics makes your transition to it a lot easier. 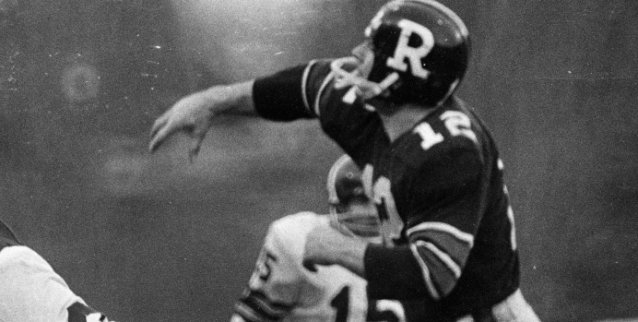 The Russ Jackson-era Ottawa Roughriders pulled Chris Cuthbert in as a fan, creating a lifelong attachment to the CFL (Photo: CFL.ca)

CO: You’ve been around the CFL for a long time. What’s your connection to Canadian football? Where’s that stem from?

CC: I grew up with it in the ’60s and my dad was an Ottawa Rough Rider fan. We watched the Riders because in the Toronto area the Argos and the Ticats were blacked out. It was a pretty good time to be a Rough Rider fan because they went to the Cup. I remember being a little upset in ’66 when they lost, but they won in ’68 and ’69.

I lived across the street from a school and we played in the schoolyard. Every night we played two hand touch or whatever, from August until November, and I was Russ Jackson or Ronnie Stewart or Whit Tucker. I think I mentioned this a couple years ago…(the REDBLACKS) were celebrating the 50-year anniversary of one of those Grey Cups and outside the hotel, the day of the game I met Margene Adkins and I can tell you that was as big a thrill as I’ve had covering the league. For me, Margene Adkins and and Vic Washington were special guys that were impactful guys in the league and for the Riders, for sure.

Then they went and played in the NFL, so I cheered for the CFL first and then I would follow guys like that and start cheering for them when they went to the NFL. Bo Scott too, with Ottawa he replaced Jim Brown with the Cleveland Browns and Vic Washington went to San Francisco Margene Adkinds went to Dallas and later, Mack Herron went to New England, Mini Mac. I’ve always followed those guys and that’s sort of where my NFL allegiances lie.

CO: I’ll always see you on walkthrough day on a game that you’re working, getting out on the sidelines and talking with the coaches and players. How important is that in your job, just relationship building?

CC: I worked a few horse races and I didn’t know anything about horse racing but one of our analysts said one of the things you learn in the business is to never meet a winner for the first time in the winner’s circle. That’s always stuck with me, covering any event. You have such a leg up if you’ve been on the trail with that person and covered them before they get to their greatest moment. That really rang true for me with (Adam) van Koeverden (a sprint kayaker and now a member of Parliament from Milton, Ont.).

He had an edge to him that I liked but you had to get to know him a little bit. You had to earn his respect and I found that my coverage of him in 2004 was probably a lot better because I got to cover him before that and learned a little bit about what made him tick.

You’re looking for a connection or just even a little tidbit or a storyline. Kent Austin had a saying about you never know when the spotlight’s going to find you and it’s so true. It doesn’t matter what position you play. There is a time in the game where it may come down to what you do or don’t do. The more guys you talk to going in, if they are the guy that does draw the spotlight, you hope you’ve got material to talk about them.

Patty Neufeld, the day before the last Grey Cup, I called him over and did a little interview about missing out before. He hadn’t won, he was traded and then Saskatchewan won. Then after it’s over he thanks me for covering the game and when you get that kind of feedback from a guy like that that’s been in the trenches for so long, I hope it doesn’t sound too self-serving, but it’s pretty rewarding when you get that feedback too. You respect the guys and their commitment to the game and when they actually respect you as well it means a lot.