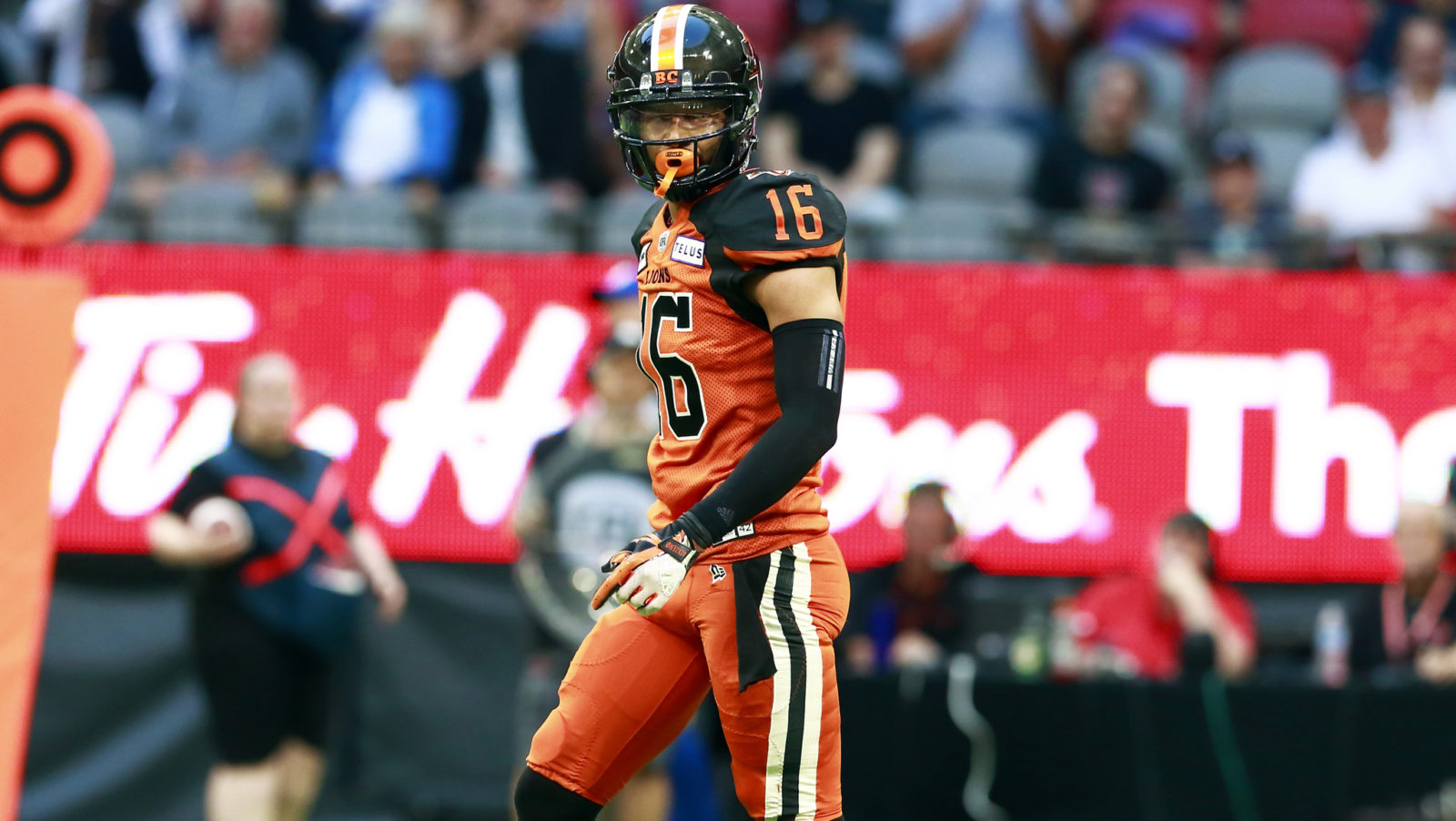 When Bryan Burnham reflects on his time at the University of Tulsa, he admits there was a lot of uncertainty on whether he was going to be able to play again after college.

But he did manage to fall in love with football again. From the right group of people that picked him up from the unknown to the people who gave him a chance in the CFL.

As a dual-threat on both ends of the field in high school, Burnham was brought to Tulsa to play defence — but not by choice.

“I mean I was always naturally a receiver. It’s always what I wanted to play,” Burnham said.

“My only scholarship offer was at the University of Tulsa and they wanted me to play defence. So I took it. The whole time I knew I wanted to play receiver, but I was never very vocal about it. I was always kind of a quiet guy.”

RELATED
» Vote Now: All-Decade Special Teams
» Nye: Half the time, twice the agonizing decisions with half-decade team
» O’Leary: Dickenson takes a page from the schoolbooks to the playbooks 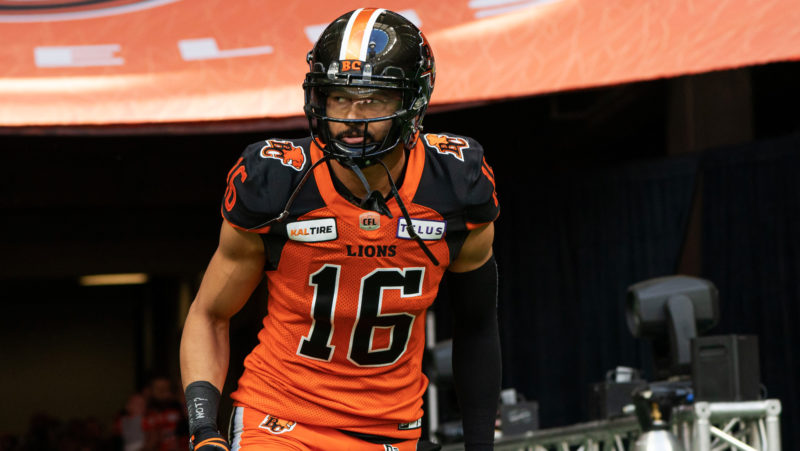 BC Lions receiver Bryan Burnham runs out of the tunnel during player introductions. (Richard Lam/CFL.ca)

Burnham sat out his freshman season as a redshirt. He eventually made some progress over the next two seasons where he saw some playing time- but it was only on special teams. He said his relationship with a former coach wasn’t the greatest, not that he was causing a scene. And then while sitting at the bottom of the depth chart, Burnham was moved to receiver.

At first, he was excited to play his dream position but the thought was immediately shut down after being told that he won’t have a bigger role on the team.

“The first thing he told me was, ‘You’re not going to play. You’re going to be a special teamer or this and that.’ It kind of hurt a little bit. Just the fact that here’s a coach telling me on day one that you’re not even going to have a chance,” Burnham said.

A few weeks later, a sudden coaching departure gave Burnham a second chance to redeem himself and prove he was indeed worthy enough to start on the team.

“There were coaches that I was sad to see leave, but at the same time, I knew this is my opportunity. This is my second chance to make a whole new name for myself, a fresh start, fresh slate,” he recalled.

“The receivers coach who came in his name was Greg Peterson. He’s one of the greatest things that ever happened to me in terms of my career and kind of saw the passion I had, the kind of guy I was.”

It was a turning point in Burnham’s college career. He performed well in spring ball and Peterson made him the starter for his junior season.

“I can’t remember a time I’ve been so excited, I couldn’t wait to call my parents, my friends and tell them that I was going to switch to a receiver. It was a great feeling to be able to play the position I know I loved,” he added.

From fourth on the depth chart to first, Burnham racked up 54 receptions for 850 yards and nine touchdowns in 2011. Burnham also didn’t let previous years went to waste either. He said being on defence made him a more durable receiver.

“I was playing safety, linebacker, filling in the gaps and making tackles. Got ran over a few times. It definitely made me a tougher, more physical receiver,” he said.

The first game of Burnham’s redshirt junior season was against the No. 1 ranked team: University of Oklahoma Sooners.

It was also the very first time of him playing as a receiver in college, a game he won’t forget.

“That was just like nerves mixed with excitement. It was such a fun experience. I actually scored a touchdown in that game. It was that game in college where it gave me confidence back because up until that point, I hadn’t really played much. I didn’t know where my career was going and then finally getting a chance to get out and play well against the No. 1 team in the nation was something I’ll never forget,” he recalled.

It was time for Burnham to match up against some of the best in college football. But despite losing the game 47-14, Burnham still accounted one of the two touchdowns Tulsa scored all night. It was a 56-yard catch to start his season with confidence going forward.

According to Burnham, the game was supposed to start at around 7:30 p.m. or 8 p.m. Teams were warming up and then all of a sudden were forced to head back to the locker room. Because it wasn’t a conference game, it couldn’t be rescheduled despite the weather conditions.

“It’s not something that you can say we’ll cancel it and postpone. We want to play. For them, in their mind, it’s an easy win. So I mean, they did beat us but that was a fun game. We didn’t start until midnight. That was one of the first games my dad was able to get to. I went out there and scored two touchdowns and had a couple of other catches,” he said.

The game finished at about 3:35 a.m. and Burnham said he got back to his room an hour later and could almost feel the sunrise starting to come up.

After the rain delay, both teams still fought it out under the lights. Burnham was able to give his team a boost on the offence. However, it wasn’t enough to take down the No. 8 team in college football at the time, with a score of 59-33. 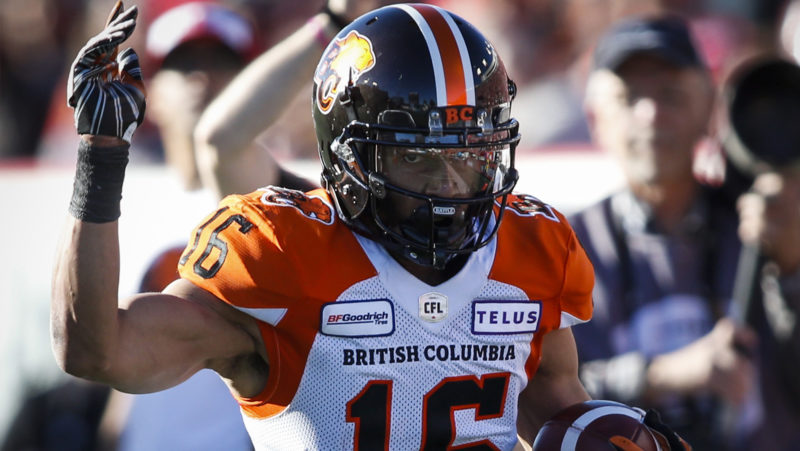 BC Lions receiver Bryan Burnham runs with the ball after a catch. (The Canadian Press)

A new challenge arose in Burnham’s final year at Tulsa. He suffered a season-ending ACL injury and the NCAA decided he wasn’t allowed to return for another year.

“I don’t even remember what my mindset was back then. It was just I don’t know what I’m going to do. Just finding out that your college career is over and it’s too late to get into the NFL,” he recalled.

Burnham moved back with his parents for three months. One night he was scrolling through the channels on TV while his knee was all wrapped up. A CFL game popped up and it suddenly gave Burnham the drive of wanting to be back on the field, no matter where it is.

He returned to Tulsa and began training for his pro day for the next spring. Despite a solid performance, no teams picked him up. It may have been the amount of time he was been away from the field, according to Burnham.

With the help of his sister Shannon Ulmer, then the club’s executive assistant who urged the brass to watch his college film, the BC Lions were one of the first teams that gave Burnham a chance to try out.

“I dominated the tryout and didn’t care who was in my way. I wasn’t there to make friends. I just wanted to play football. That’s just the way I went about that day, to impress the coaches and Wally [Buono],” he said.

The horrific injury and uncertain times made the three-time CFL All-Star realize who were the most important people in his life and supported him along the way.

“My teammates at Tulsa who went through that whole situation were amazing. Just all the support that I have from those guys and my coaches, I mean they helped me so much,” he said.

“My wife who was my girlfriend at the time, she took care of me. I don’t know why. That’s when I knew she was the one. She was bringing me food, helping me get out of bed. I needed help with everything, she was there in between classes. I don’t think I would’ve been able to do it by myself,” he added.

Coming off a career year in 2019, Burnham said 2020 has been tough as well. No matter how hard he trains, there is always the uncertainty of when he can play again.

“But it is what it is. I’m going to continue to be prepared and get ready to play a season. If there’s not, you know I just hope that we can hit the ground running next year,” he said.