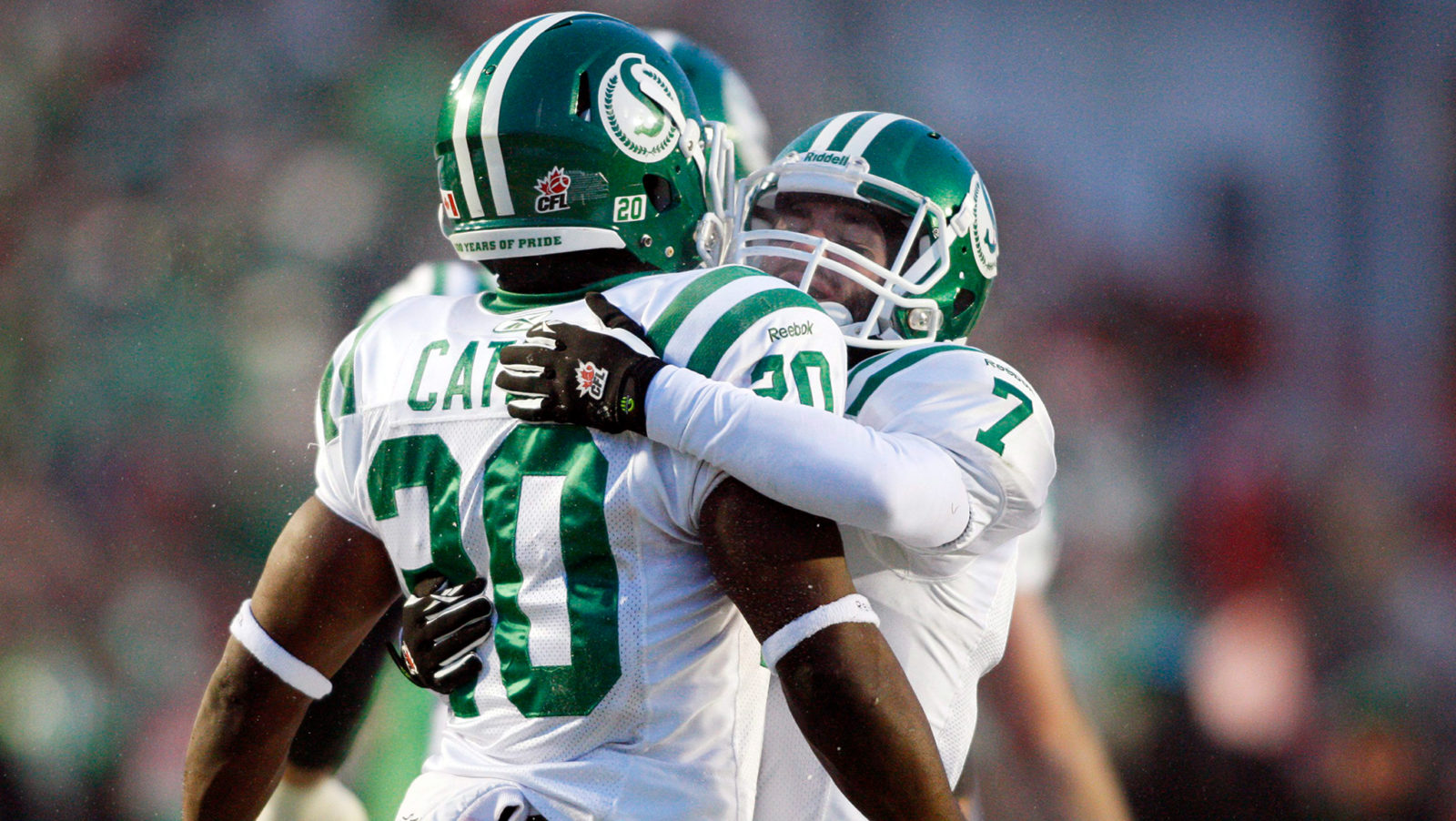 Hello everyone and welcome to Part III of my: “Wildly unofficial history of uniforms for every CFL team that immediately becomes less about uniforms and more just a fun nostalgia trip” Series.

In this edition we check out the Saskatchewan Roughriders! 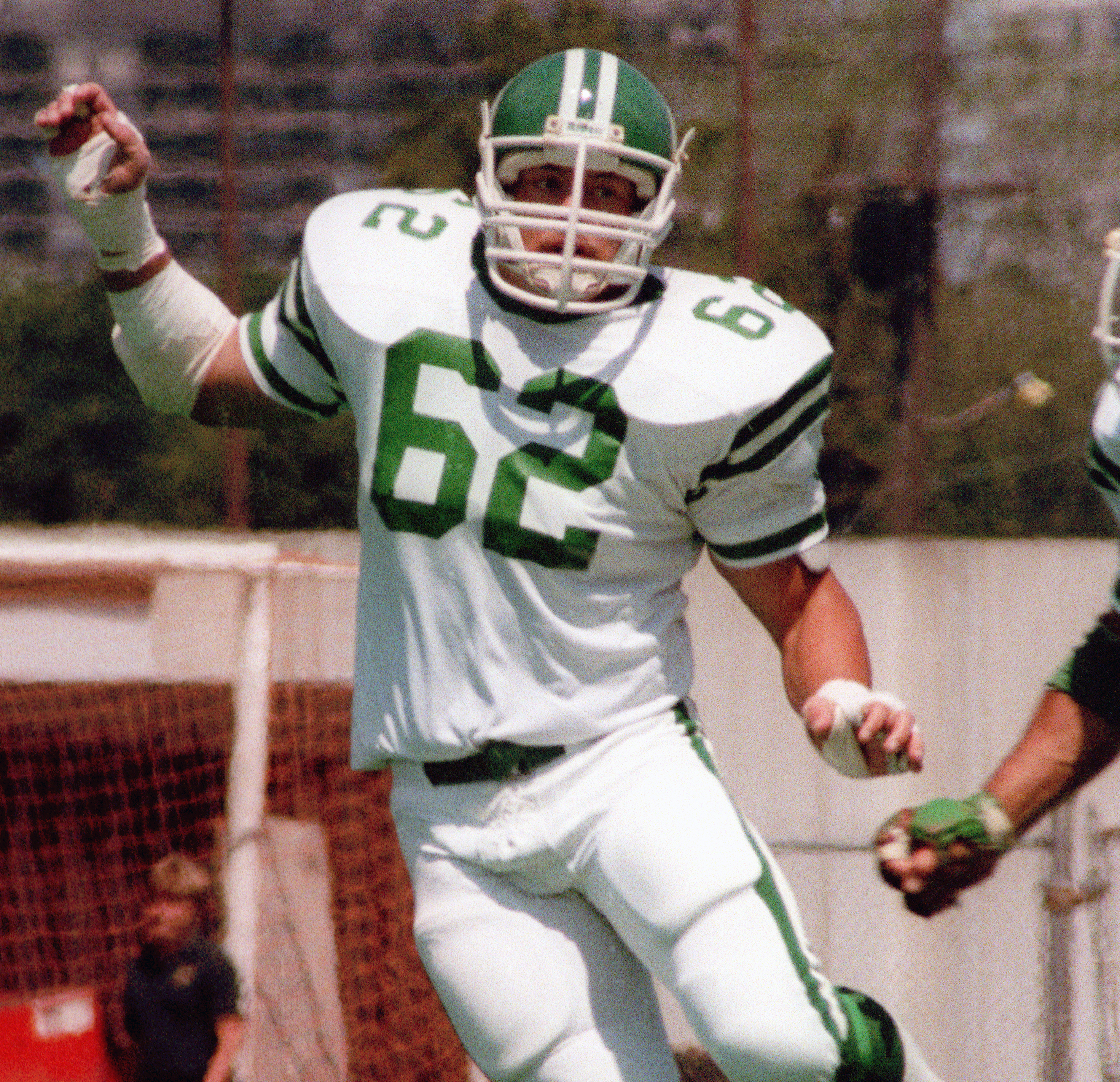 Normally I would start with a vintage black and white photo — a dynamic action shot of Ron Lancaster.  But in this case, let’s go with former defensive linemen Al Johns. The uniform is classic mid-1980’s but after doing a little research on Al Johns I found something more important than his clothing, I found this 1986 promo video:

Al shows up eight seconds in and I have so many questions. Who came up with this idea? Who is the woman in the video? Has the fake movie producer worked since? How quickly would this video be shut down in 2020? I doubt I will ever get answers to these questions but at least the video worked to inspire Saskatchewan to “take no prisoners’ as they would beat Ottawa 33-14 in the Battle of the Rough Riders. 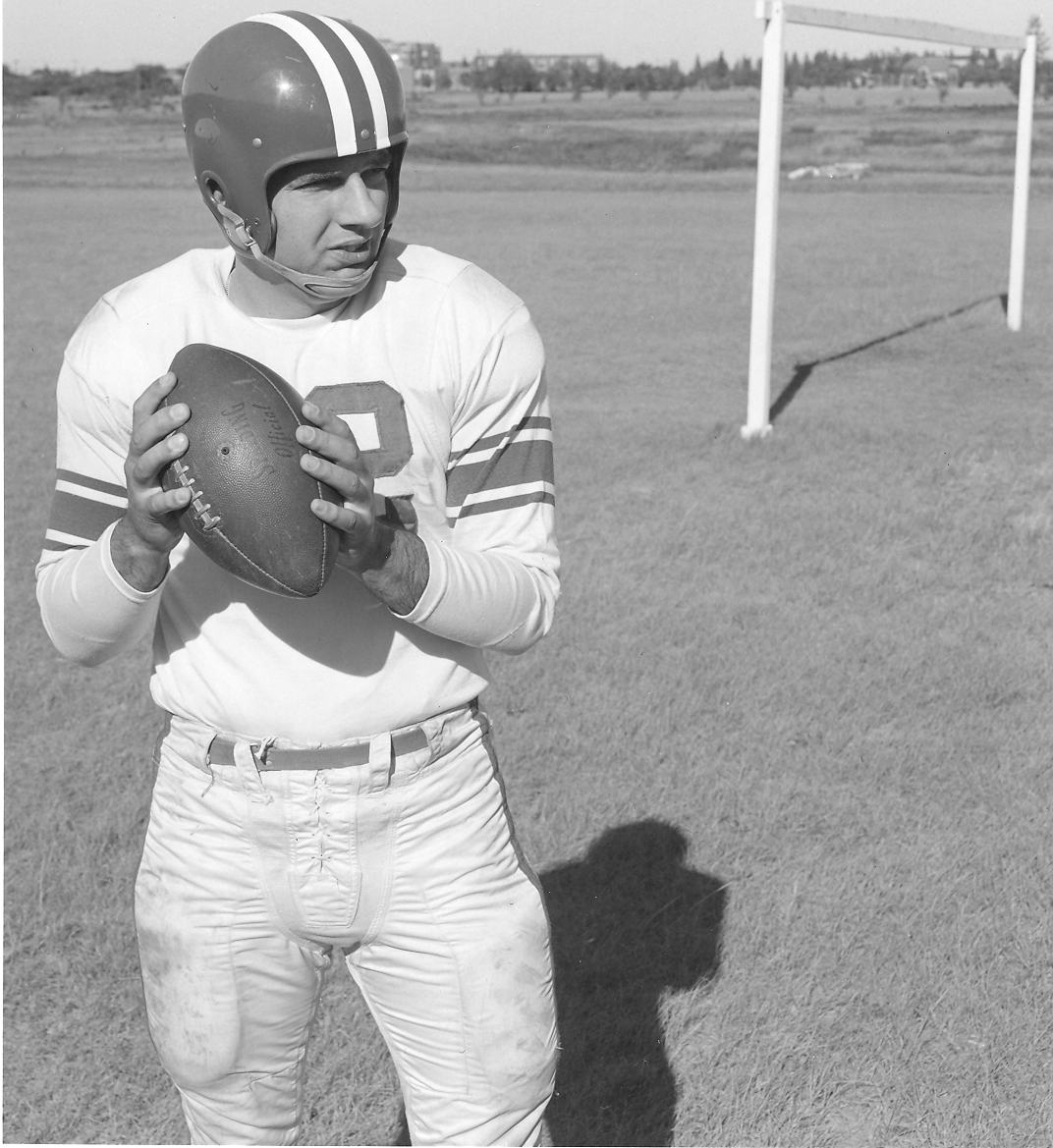 I like the basic simplicity going on here. I also feel that this unknown player is either really early for practice or got the wrong address. I see no evidence that the rest of the team is anywhere in sight. 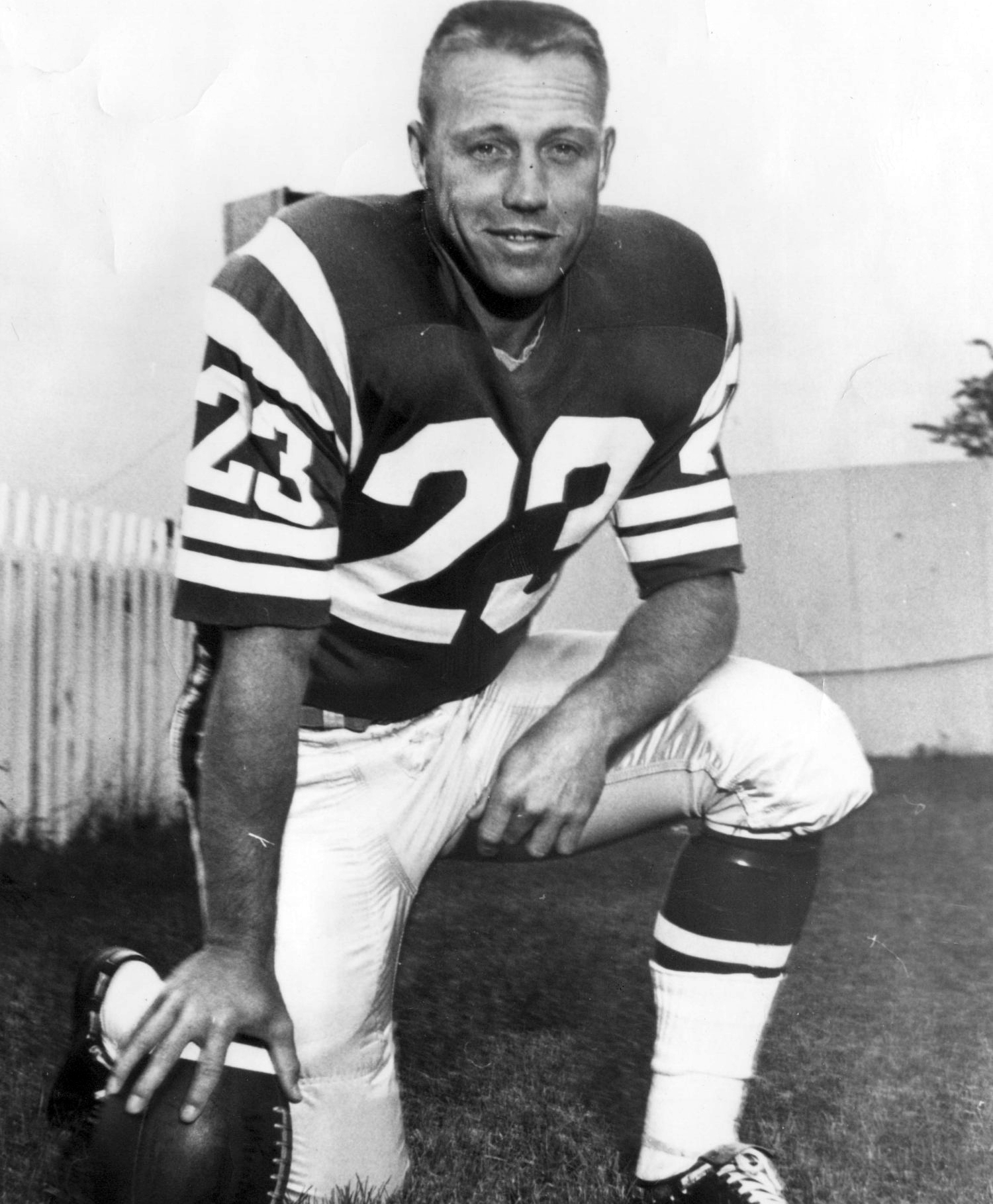 You really think I would go this long without including Ron Lancaster? I love that look on his face. When you are the greatest quarterback in franchise history you deserve to pose with that confident smirk. This picture screams 1960’s quarterback with that conservative haircut, conservative pose and just the right amount of confidence on his face. Also the wholesome index on this picture goes to a whole other level with the presence of a white picket fence in the background. You know soon after this picture Ron invited the photographer to join him and his family for lemonade and barbeque. 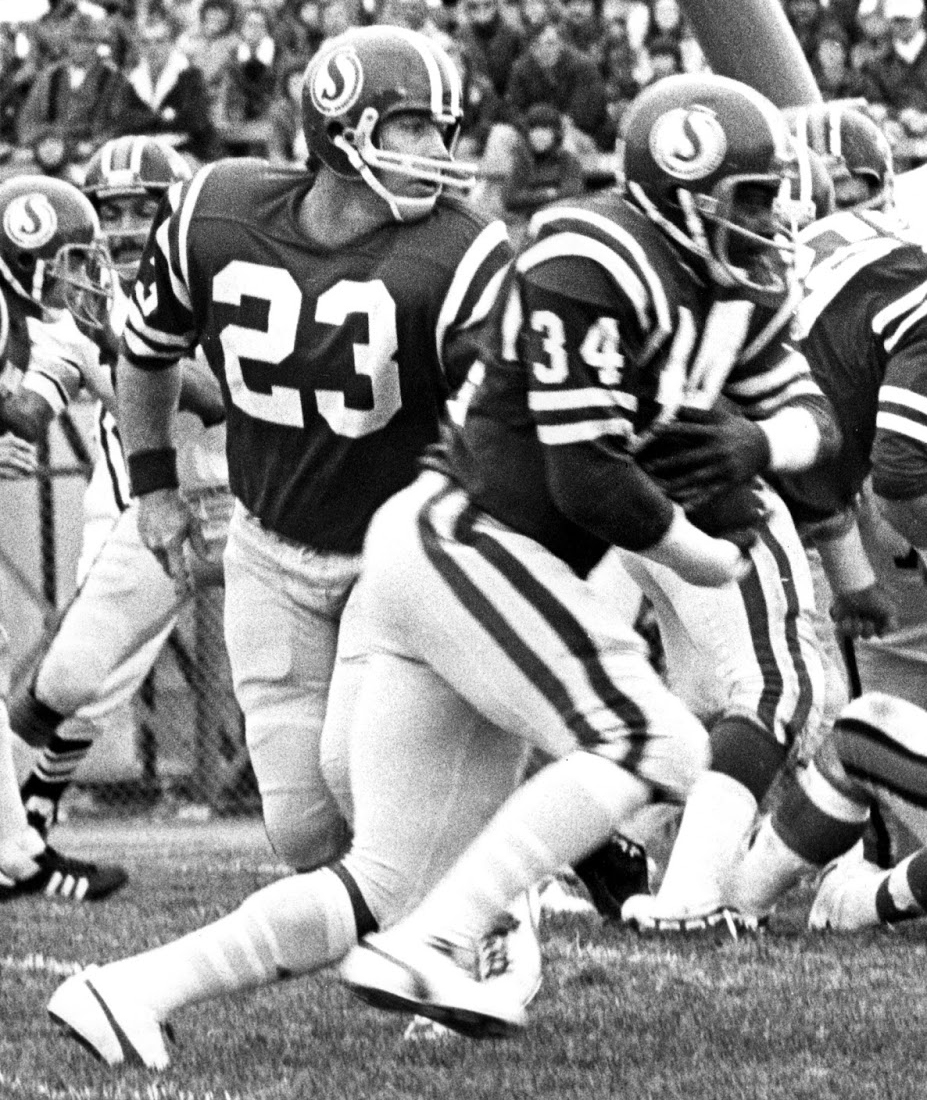 I am of course contractually obligated to find a shot of George Reed. Judging by how close the goal post is and the fact that it is George Reed I’m guessing he scored a touchdown on this run. 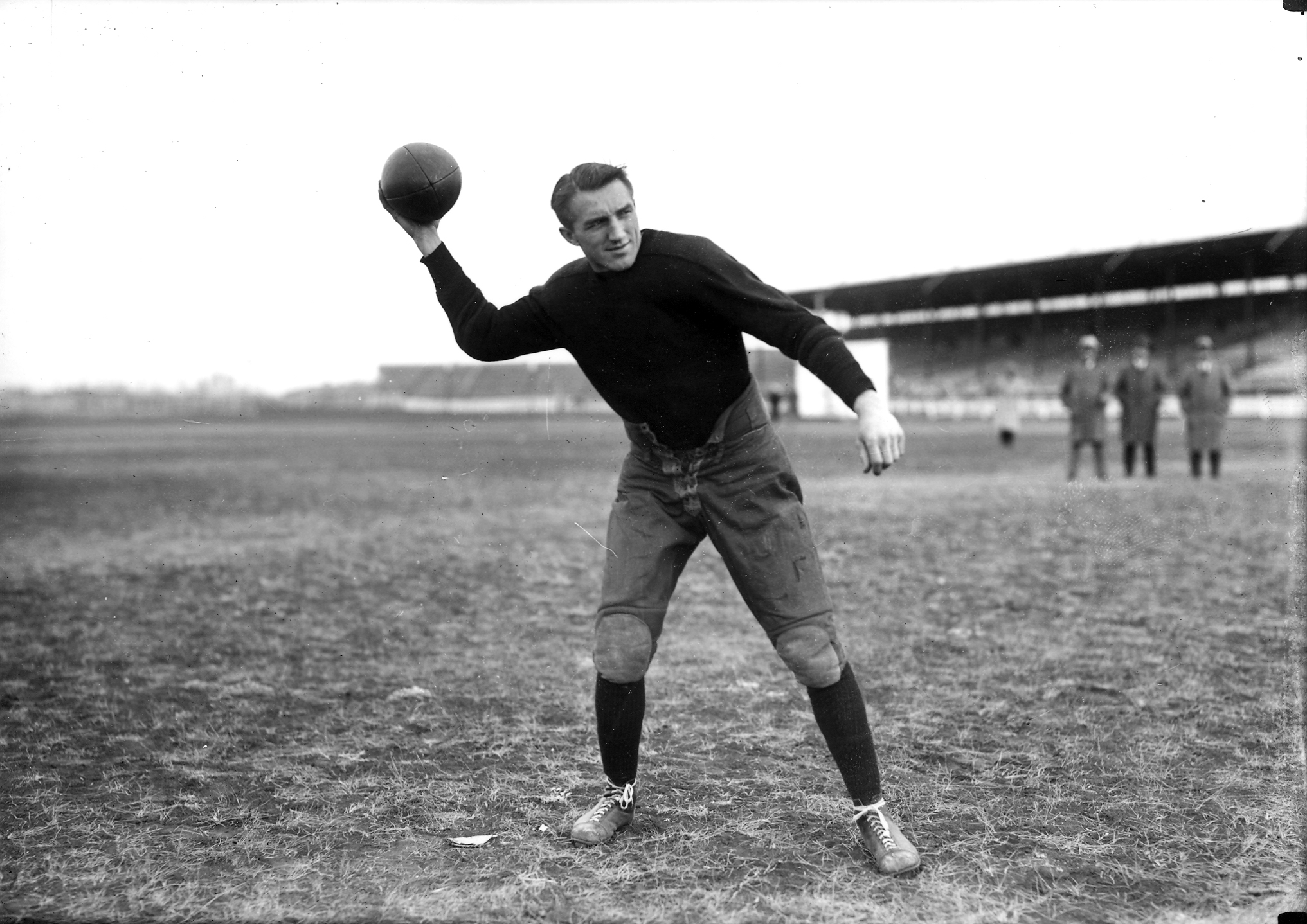 During the 1910’s Saskatchewan changed their colours three times from gold and purple (1910) than blue and white the following year followed by red and black in 1912. They would stick with that very Stampeder –esque colour combination until 1948. I’m sure most people know but just in case the “inspiration” for the eventual switch to their now iconic uniforms was the result of then owner Jack Fyffe discovering a couple sets of green and white uniforms on sale at some surplus store in Chicago. Admittedly that origin story doesn’t exactly conjure up any sort of destiny/fate storylines but hey it all worked out.

Oh as for this picture judging by his passing form I’m guessing Saskatchewan employed more of a ground attack offence. 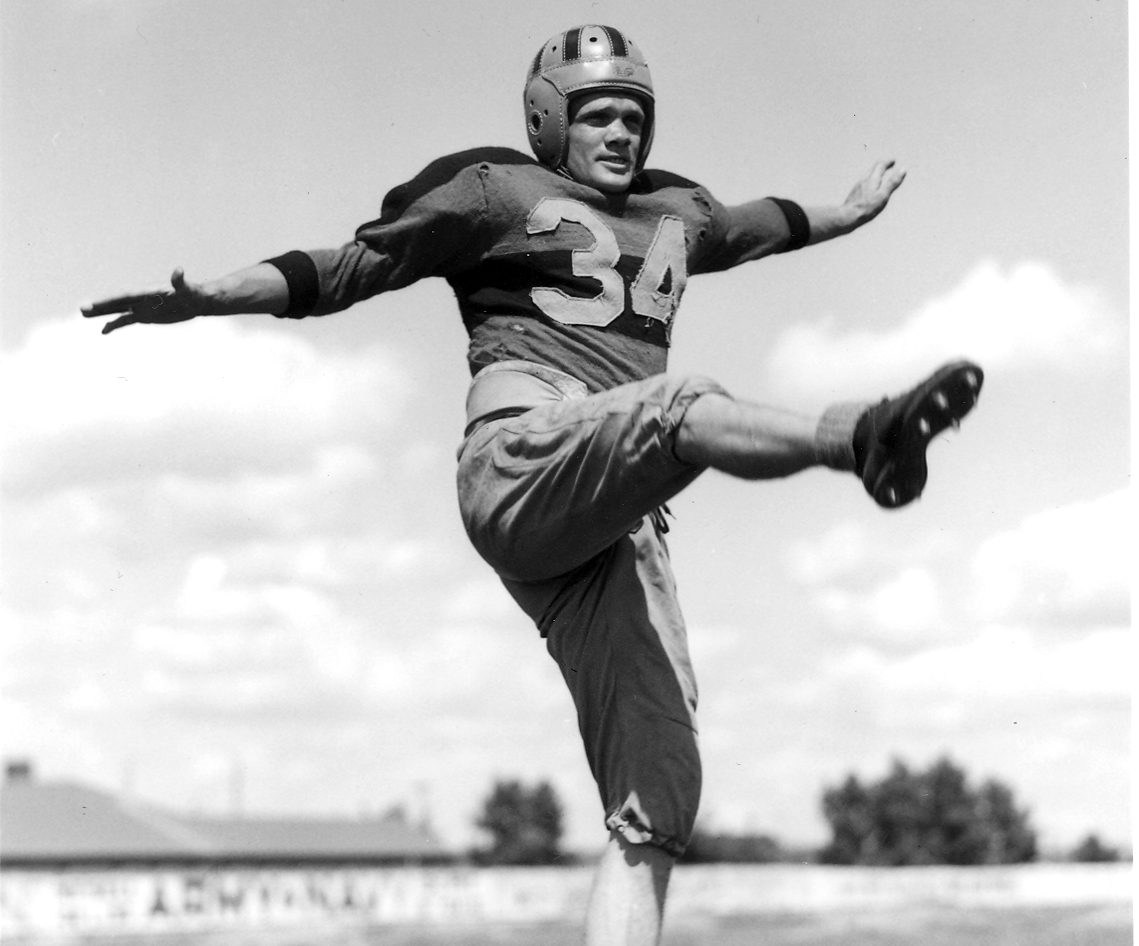 I promise I am not here to judge and I have no idea how difficult it is to successful kick a field goal but is there any way for kickers to not to do the “I look like an airplane” pose on team photo day? For ages kickers have been trying to prove they’re just as much of a football player as everyone else on the roster and shots like this do not help. Thankfully eventually the jersey #34 would eventually be worn by George Reed and we can all move on. 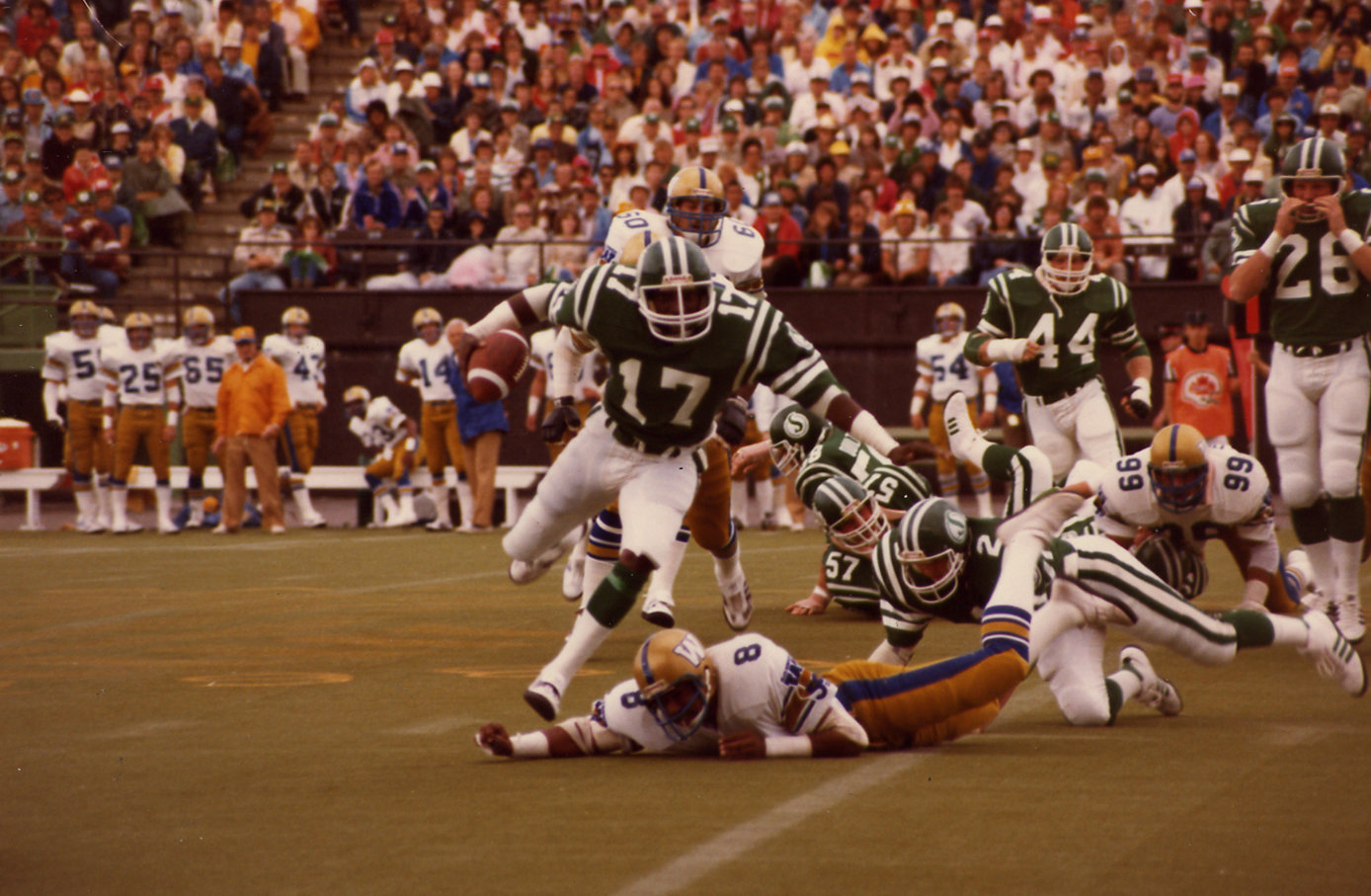 I am always here for pictures of the blue/gold/white doing battle against the green/white. Beyond enjoying the aesthetic I love using this column to highlight really great players that younger generations (and me!!) have forgotten. Say hello to Joey Walters a two-time CFL All-Star wide receiver who was inducted onto the team’s Plaza of Honour in 1990.

Check out these back-to-back years:

That was back during the days of 16 game schedules and in an era where defensive backs could take far more liberties when it came to hitting receivers.  I don’t know who was playing CFL fantasy football in 1981 but if you had Joey on your team you were winning. 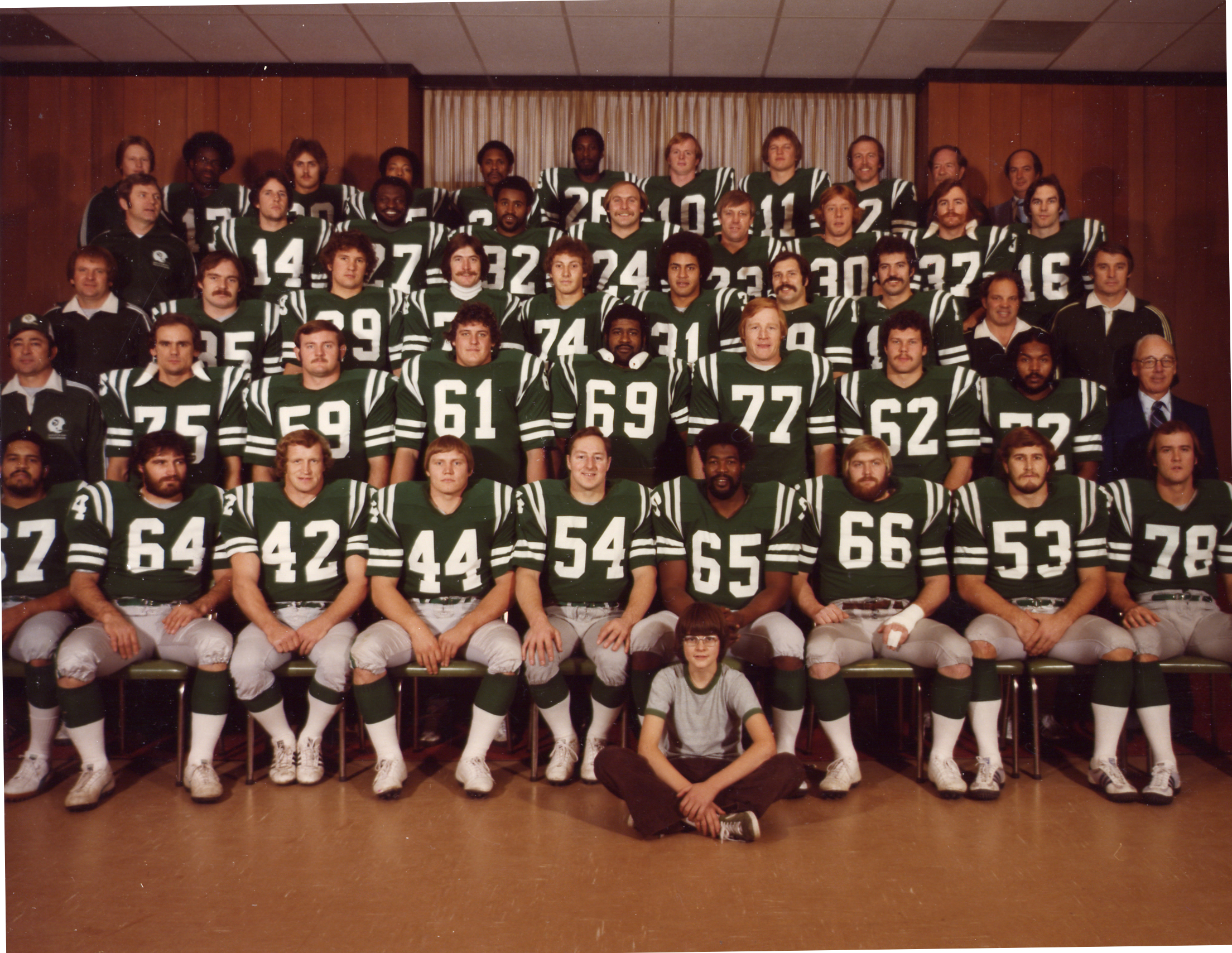 Why, Saskatchewan, are you taking your team photo indoors like it was a grade 6 class photo? Those moustaches, those uniforms that scream “Riderville” and George Wells’ (#69 right in the middle) neck roll need to be seen by the world not tucked away in some dingy basement. Also whose kid is that in the front row? 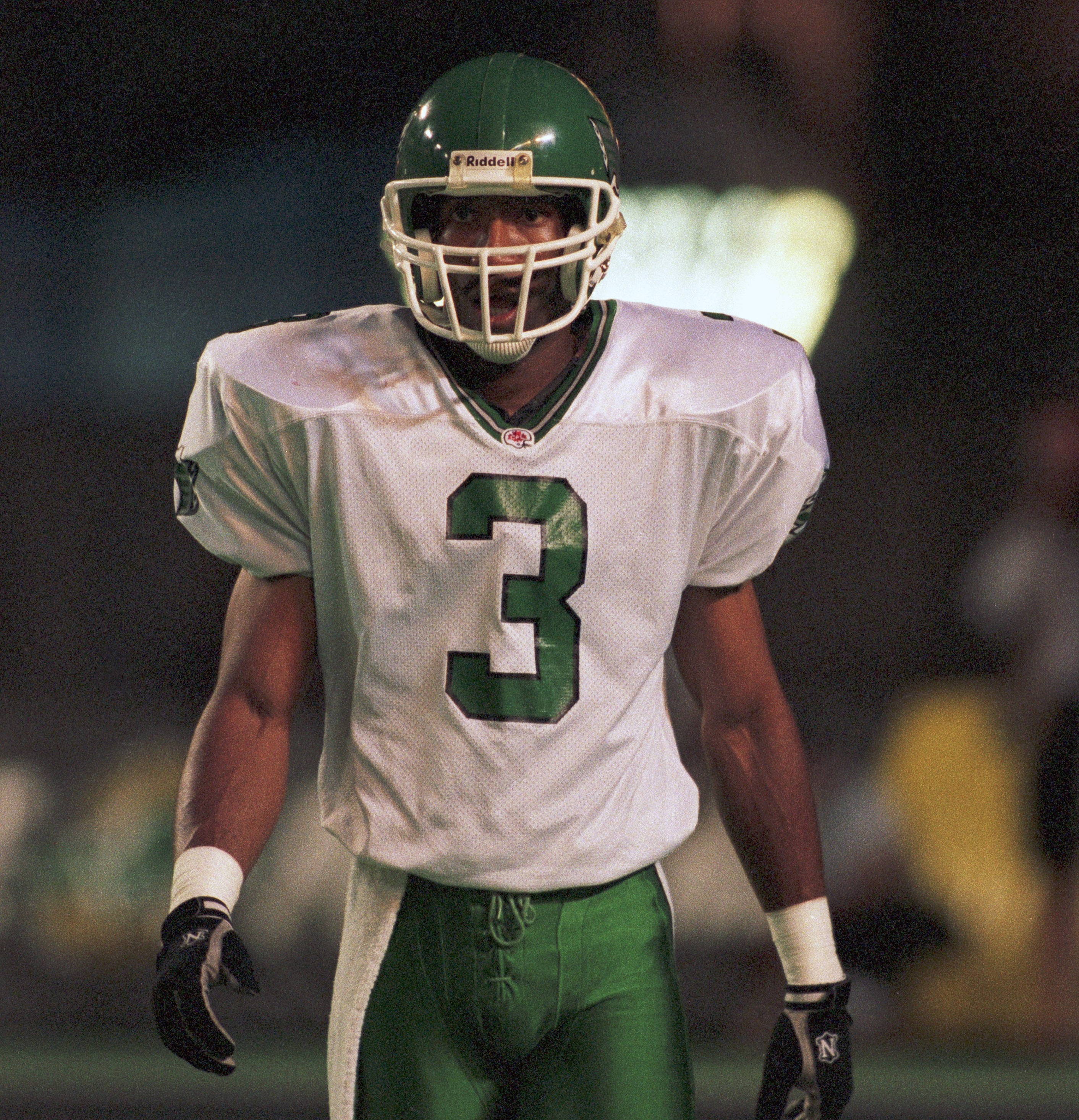 Wait, what’s going on in this picture? Did Barry Wilburn miss “pick up your stripes” day during orientation? Let’s be honest this uniform reminds me of a pizza order by a super finicky kid, just so very plain. Wilburn is one of just 10 players to win both the Grey Cup (1994 B.C. Lions) and the Super Bowl where he recorded two interception to help Washington beat Denver 42-10. 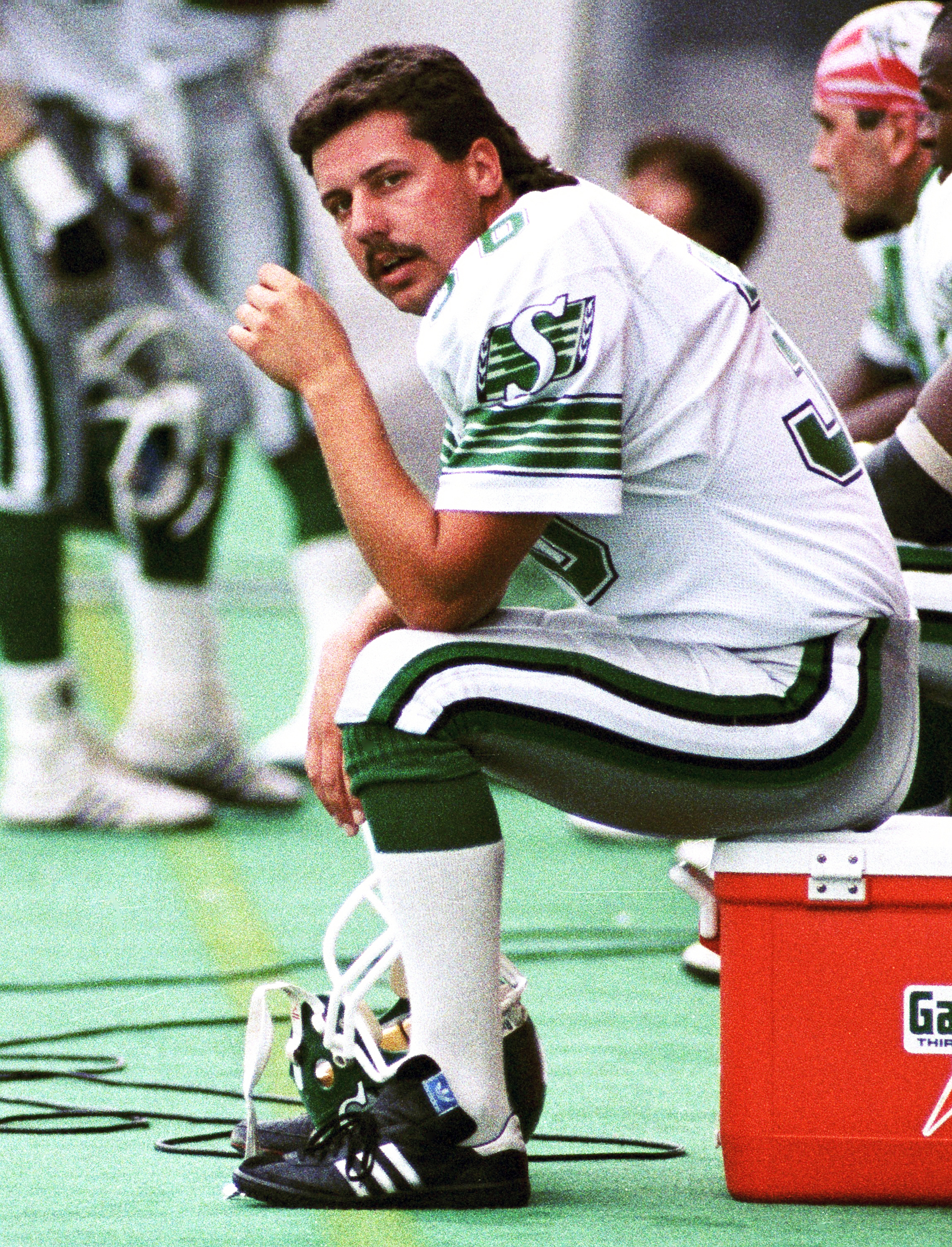 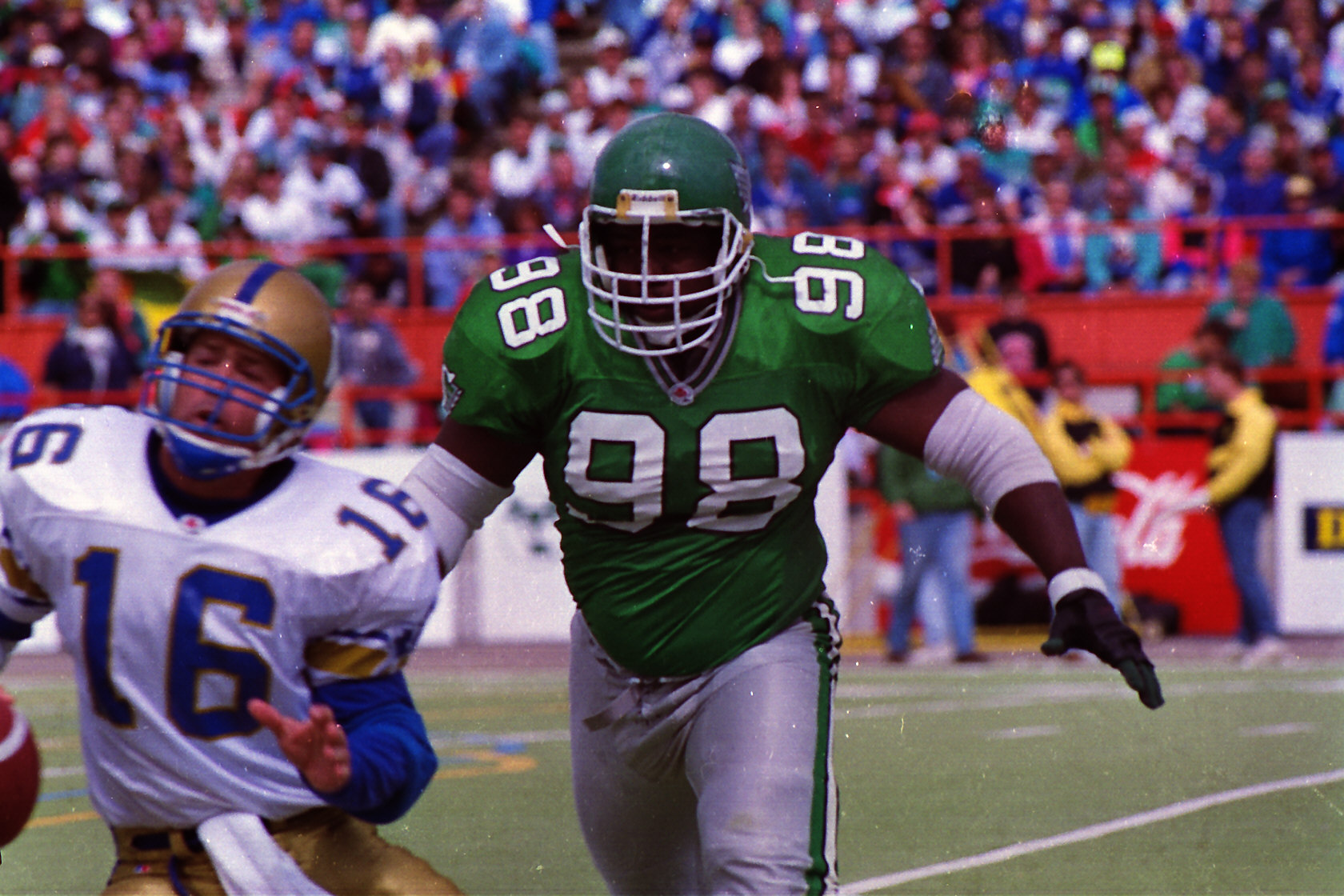 Stripes or no strips Jearld Baylis was such an intimidating player in his prime. I feel bad for Matt Dunigan as he’s about to get walloped by the multiple time all-star. 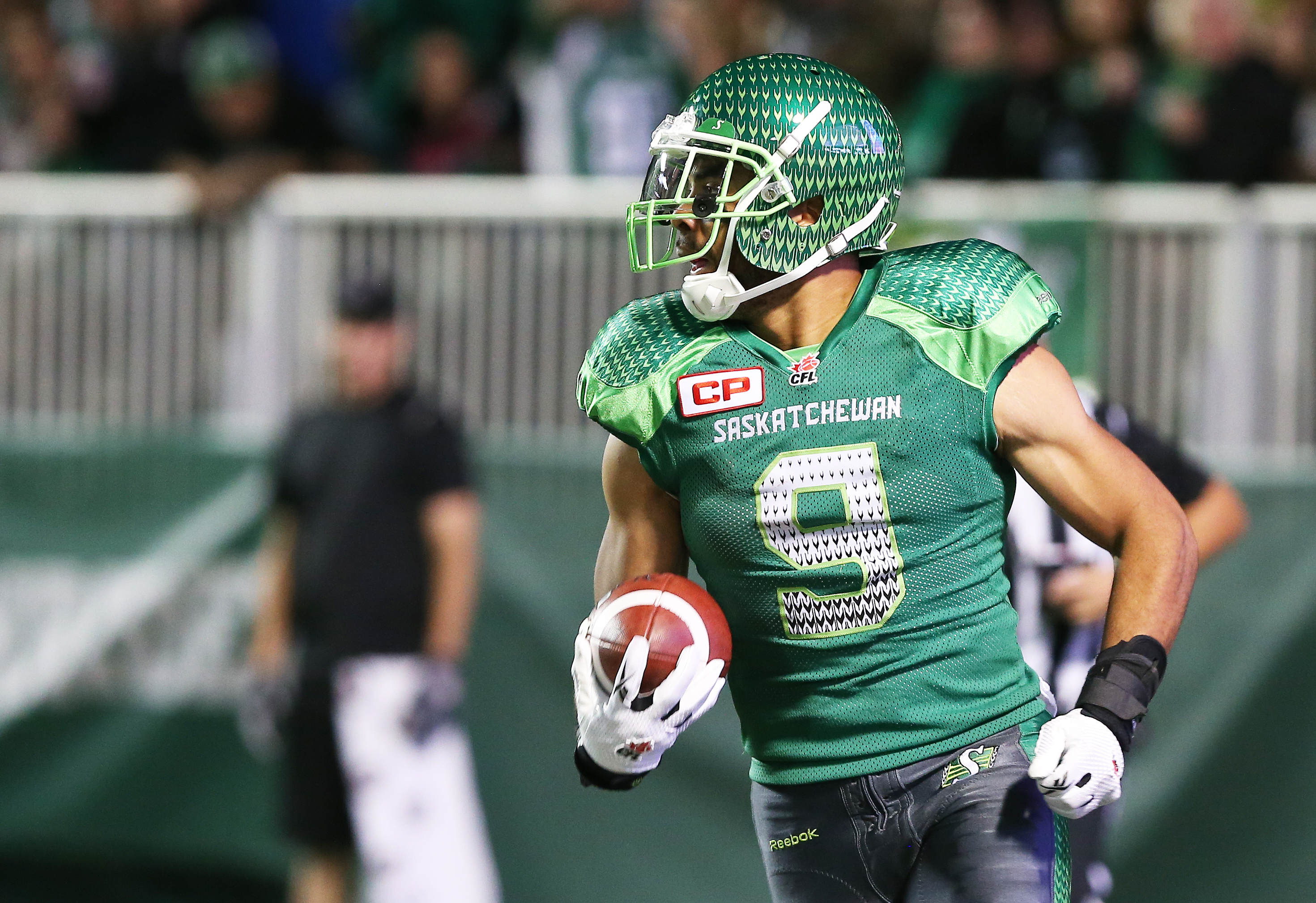 It’s time for me to play the old man card I am just not a fan of this CFL Signature Uniforms that were introduced in 2014. They look like something that would have used for the University of Oregon. Just imagine the looks that Nic Demski would have got if he went back in time and strolled up in his “blitz green” uniform to that 1910’s quarterback I talked about earlier? 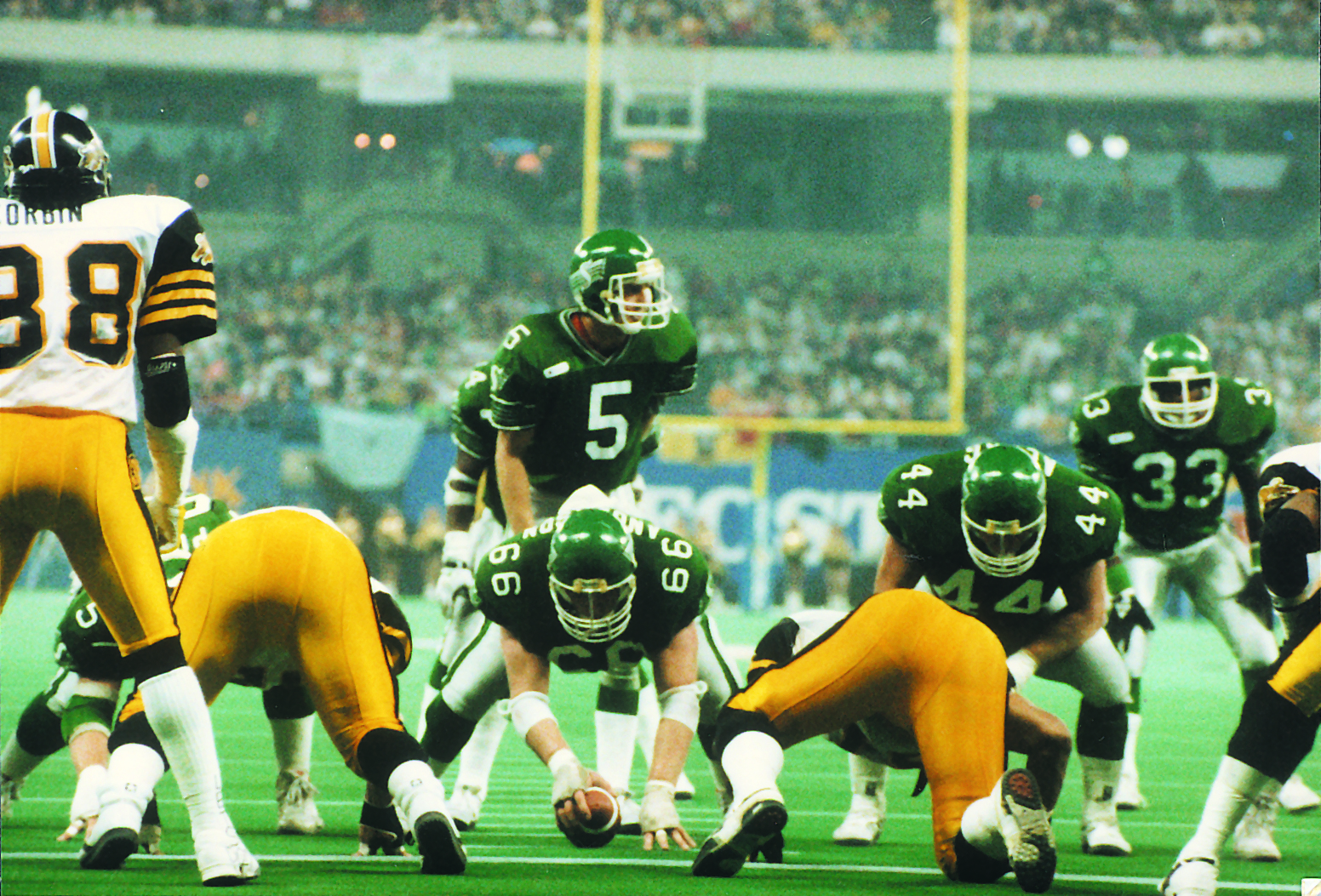 I just love this angle from the 1989 Grey Cup with soon to be MVP Kent Austin under centre. What stuck out to me was just how small the offensive linemen were. Today’s game features so many behemoths but here you have left guard Roger Aldag listed at 6’0’’ 235 pounds and centre Mike Anderson who clocked in at 6’3” 255 pounds. 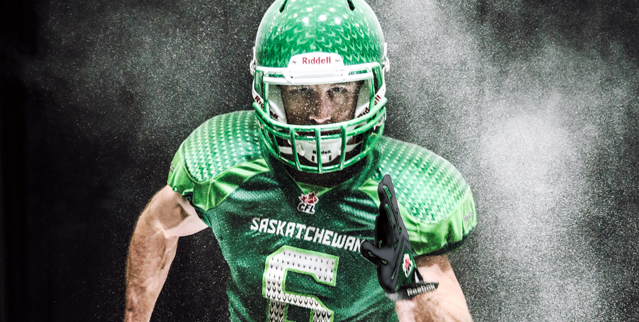 Sorry Saskatchewan, the blitz green jersey  can make the player look as super ripped as you want with intimidating veins I still ain’t liking this uniform. Give me classic Green & White with the stripes where they are supposed to be and a big “S” on the helmet.