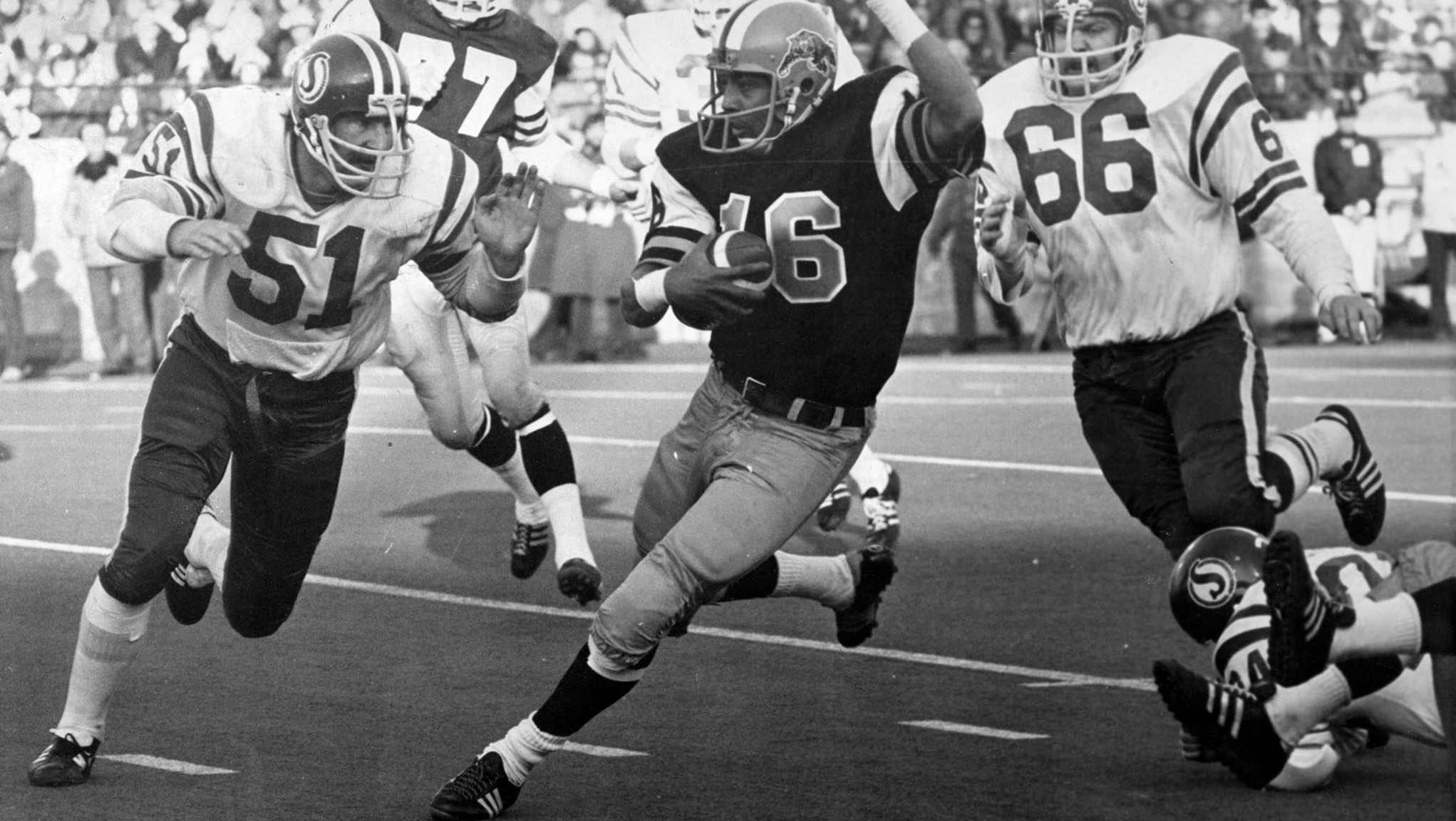 Chuck Ealey is on the run in the 1972 Grey Cup game played in Hamilton Photo: The Canadian Press

Brian Wood was in Hamilton, working his first job in broadcast on Dec. 3, 1972, when the Tiger-Cats won the Grey Cup at Ivor Wynn Stadium.

He was on the air at contemporary rock station CHAM and witnessed the city celebrating its team’s win over the Saskatchewan Roughriders.

“It wasn’t bad. There wasn’t a lot of snow around,” said Wood, who has been with CHCH TV in Hamilton for the last 25 years and is the station’s weather and traffic specialist. The temperature at kickoff for the game that day now almost 49 years ago was around 0C.

“From what I recall that day…it wasn’t freezing cold or anything. It was cool,” Wood said. 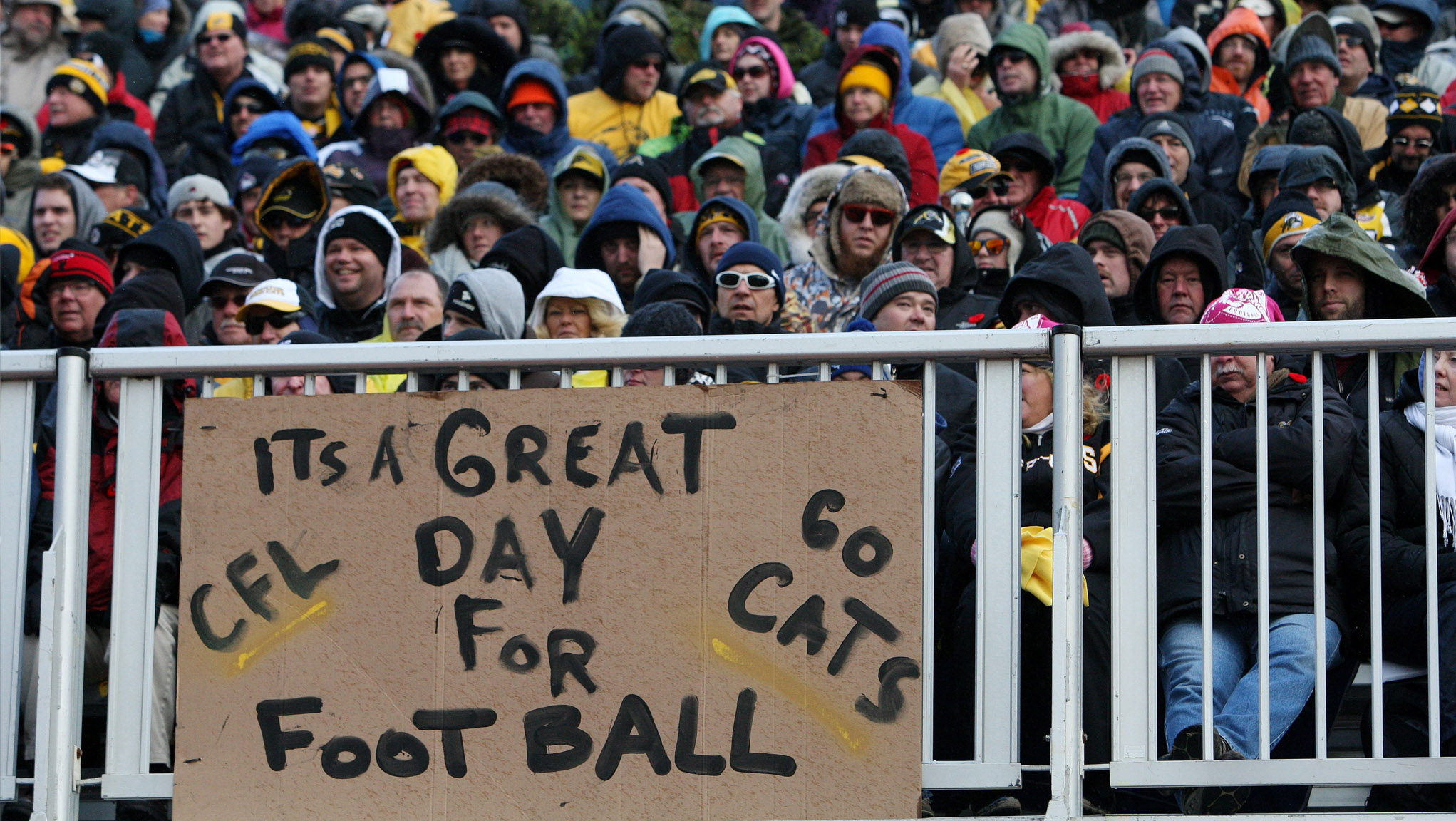 CFL fans are used to cheering in adverse conditions, as they did here during the Ticats’ brief stay in Guelph in 2013 (Photo: The Canadian Press)

With the CFL announcing this week that its 2021 season had been pushed back to Aug. 5, the date of the Grey Cup jumped back as well. The Dec. 12 date for this year’s game is the latest that a Grey Cup will be held, surpassing the Dec. 11, 1937 game that was played in Toronto.

There’s been some skepticism over the weather that could await the teams that play for this year’s Grey Cup. Of course, forecasts don’t reach almost eight months into the future, but Wood said that if history is any kind of indicator, it shouldn’t be too drastically cold when Grey Cup game day gets here.

“It’s usually a pretty cloudy month. You get some sunshine, you get some sunny days and the temperature isn’t really cold,” he said. “You dip into the minus column overnight for overnight lows and seasonal daytime highs in December are around three to four degrees, five degrees, that kind of thing.

“You can get mild days, that’s always possible. In December, 2020 I think we got 10 degrees. You can get varying conditions. You can even get snow. The month of December is a changeable month.”

It’s suggested to Wood that if you were going to attempt to play a mid-December Grey Cup in an outdoor stadium in Canada, Hamilton might be the best place to try it. As someone that’s had his career take him from Hamilton to Winnipeg and Moose Jaw, Saskatchewan before he returned to Hamilton, he was laughing before the question was fully presented to him.

“I would say so,” he said. “Knowing what it’s like in December out west, particularly I lived in Winnipeg and Saskatchewan and (the weather) can be horrendous in December.

Wood admits he’s not a huge football fan. He hears about the extremes that weather can throw at fans and often hears about the snowy 1996 Grey Cup game that Hamilton hosted. December is obviously a winter month and with that, anything can happen in it.

“You can get the gamut of (weather). You’re not going to get brutally cold temperatures or anything like that. But it’s going to be fairly chilly.”

Whatever weather gets thrown at fans for this year’s Grey Cup, it’ll come down to how well you prepare yourself for it. Any Grey Cup veteran will tell you that it’s about overdressing and ensuring you’re comfortable to spend a few hours outdoors, watching another chapter of Canadian football history being written.

“Make sure you check the forecast!” Wood boomed with his broadcast-friendly pipes.