Riders’ Schaffer-Baker makes best of ‘next man up’ 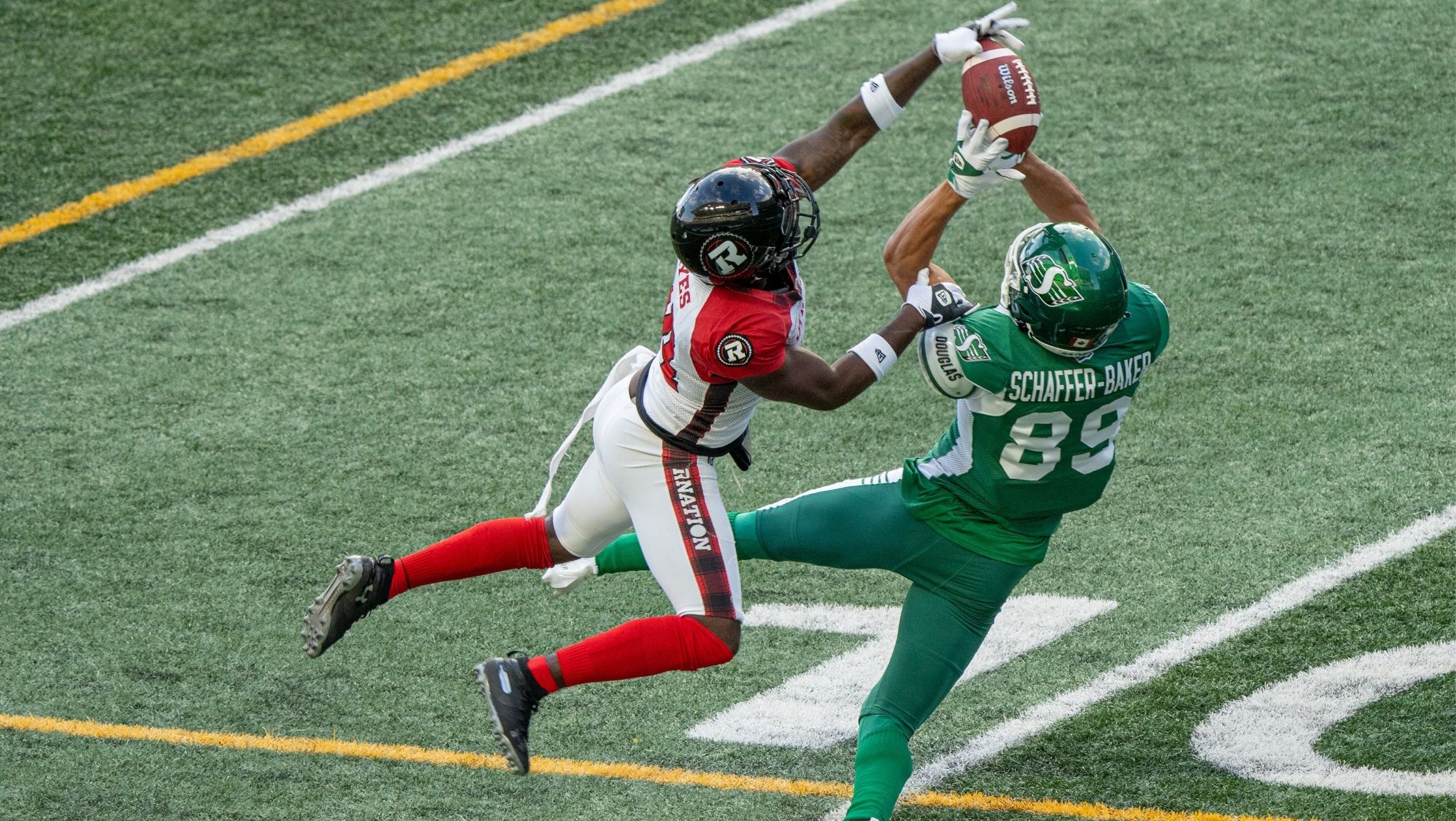 Riders’ Schaffer-Baker makes best of ‘next man up’

REGINA- In his first CFL game, Candian wide receiver, Kian Schaffer-Baker capitalized on the Riders’ “next man up” mentality, turning heads in his debut.

After Shaq Evans suffered an injury against Hamilton last week, no one on the Riders seemed all too worried. Instead, players in the Riders receiving room were vocal about how excited they would be to rise to the occasion, wishing Evans a speedy recovery in the process.

Alongside the usual pass-catching suspects in Kyran Moore and William Powell, it the new faces in Brayden Lenius and in particular, Kian Schaffer-Baker, who had a lasting impact from the first to the fourth quarter.

The 23-year old was selected by the Riders with the 30th overall pick in the 2020 CFL Draft. During his time at the University of Guelph, Schaffer-Baker played in 28 games recording 95 receptions for 1,544 yards and eight touchdowns.

Entering Saturday’s game, Schaffer-Baker had yet to make an appearance in the 2021 season. That changed and it was a game he’ll never forget.

RELATED
» Boxscore: Riders, REDBLACKS by the numbers
» Watch: A.J. Harris stretches out to catch pass
» Through the lens: REDBLACKS at Riders images

“It’s such a surreal experience, I still can’t even believe it,” Schaffer-Baker told reporters post-game. “It’s just amazing being out there with my brothers. Nothing better than getting the dub at the end of the day. Lot of mistakes, I made personally, so going to learn from them and grow and just get better,” he added.

With 64 yards, three behind Lenius for the team’s leader, Schaffer-Baker looked as if he had been on the field countless times for the Riders. Hauling in four receptions on the day made tied for Fajardo’s second favourite target as well.

“It was amazing, but it’s what I do every day,” said Schaffer-Baker on his first reception. “I come out here and catch footballs so I’m used to it. It was definitely a great experience getting the first one out of the way, that gets the jitters and everything out. But, continue to grow off that and get better.”

Schafer-Baker’s seemingly seamless transition into the Jason Maas, Cody Fajardo-led offence, is something Craig Dickenson noticed and credits the team’s ability to draft and develop talent with.

“I think we’ve drafted well to be quite honest,” said Dickenson. “We’ve got some good Canadian receivers that we picked up and I think, the second thing is this: those players are working and working hard. They get out there, they put the work in each and every day and I think that’s paying off. For a guy like Kian Schaffer-Baker who comes in and sees Mitch Picton, Jake Hearty, Brayden Lenius, and he sees how hard those guys work, I think it just kind of rubs off on him.”

Along with Schaffer-Baker’s performance, the entirety of the receiver room stepped up to make plays, something Dickenson has come to expect now.

“I wasn’t necessarily surprised,” said Dickenson. “I think we got a lot of playmakers in that receiver room and I think coach Moore does a great job of teaching it’s not about one, it’s about the unit. I think the unit comes to play every night and I think they played well again tonight.”

Saskatchewan’s next game will be after their bye-week in Week 5 where they take on the Winnipeg Blue Bombers.