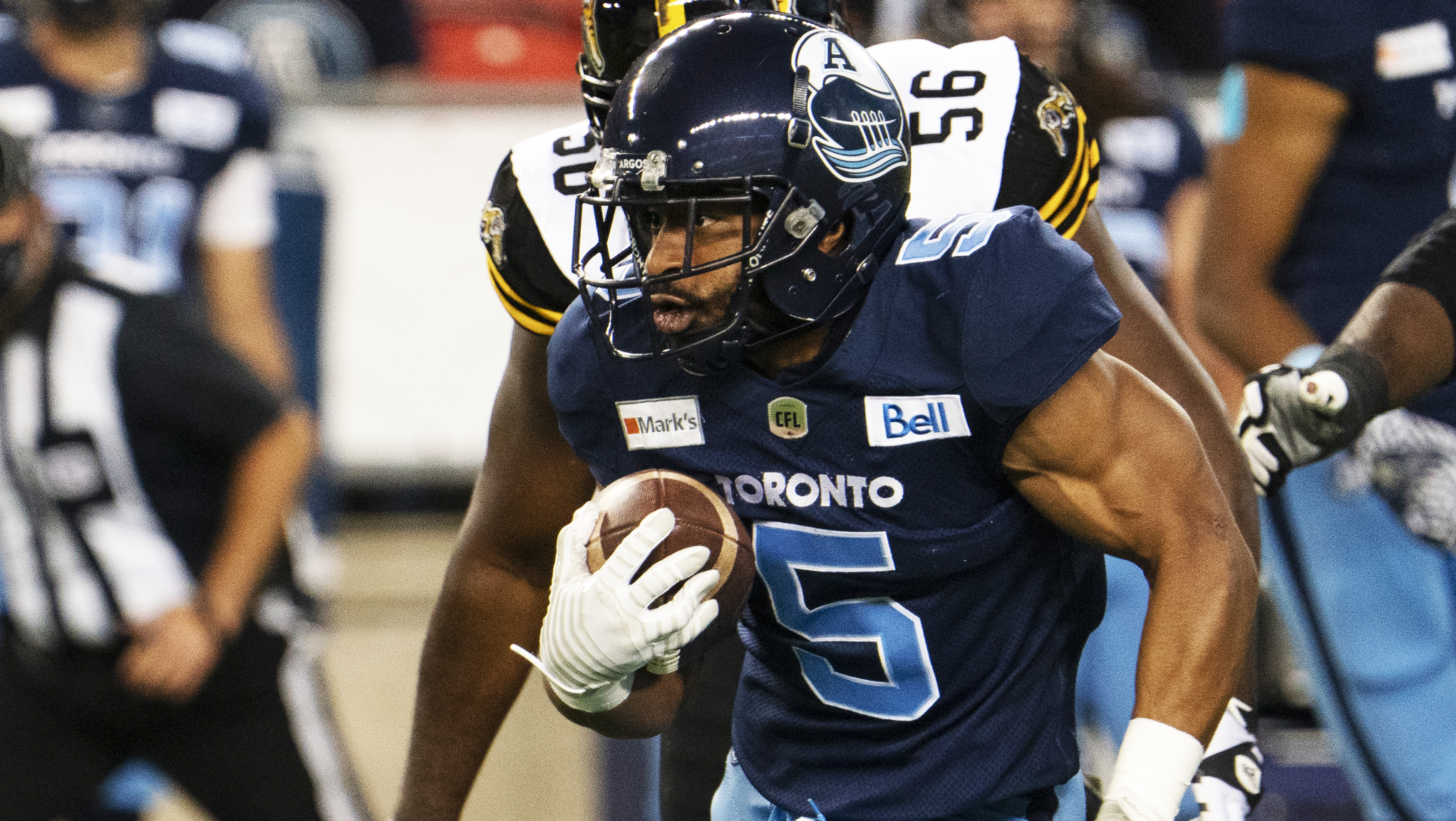 TORONTO — At its best, sport should reflect things from our everyday lives back to us. We’re starting to see something like that in our writers’ picks.

Just like spots 2-7 in the CFL standings are a jumble of 3-2, 2-2 and 2-3 teams, the CFL.ca writers are starting to sidle up to one another in the standings. It’s worth mentioning there is no Winnipeg Blue Bombers equivalent here, where one person has raced out ahead of everyone else with minimal mistakes. It’s more of a mass-middling in these parts.

While the teams in the standings look to create some separation in the standings as we near the midpoint of the regular-season, the writers are hoping for something similar. That may be why everyone has latched on to that Blue Bombers team that has looked dominant in most of its games this year, en route to a 5-1 start.

With QB uncertainty over the Ticats — at least at this point in the week — the writers have all looked to the visiting Stampeders as well. There may be less uncertainty in Saskatchewan, where Cody Fajardo is practising with the Riders after leaving the Banjo Bowl early, but one of our writers (see Nye, Jamie) hinged his Riders’ pick on Fajardo playing against the Argos on Friday night. We did everything we could, Jamie. It’s in the football gods’ hands now.

Check out the writers’ picks below.

RELATED
» Nye’s Weekly Predictor: All in on the Alouettes
» CFL Pick ‘Em: Make your picks for Week 7!
» Start vs. Sit: Receivers stepping up 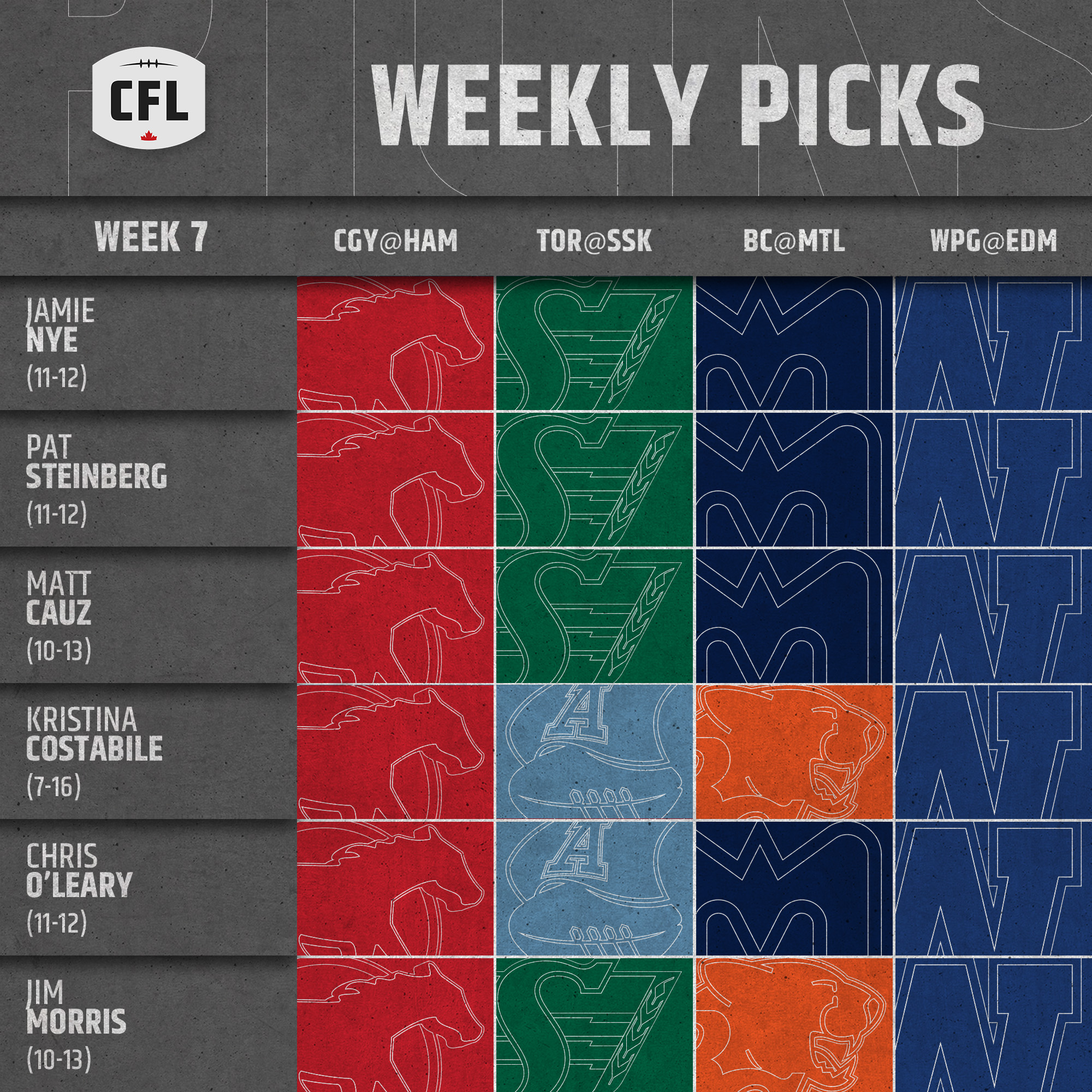 The Stamps come into Tim Hortons Field looking to hand the Ticats their first at-home loss since Nov. 3, 2018. Calgary’s defence played lights out on Saturday, sacking Trevor Harris seven times and keeping what had been a prolific offence out of the end zone in their Labour Day rematch. Offensively, they could have been better, with a freshly-returned Bo Levi Mitchell lacking chemistry with his talented receiving corps.

As we wait to see if Jeremiah Masoli is healthy enough to play this week, David Watford waits in the wings. If the offence is a question mark, we know that the Ticats are more than capable of making game-changing plays on defence — they’ve scored two touchdowns in their last two games — and special teams, where Frankie Williams has a pair of touchdowns this season.

Another game with QB questions, though this one doesn’t seem as up in the air as our first game. Cody Fajardo has practised with his Riders’ teammates and if that trend holds up in the coming days, we’d expect him to get the start for when the Argos come to town.

The first-place Argos aren’t the same tails-between-their-legs bunch that has made an annual appearance at Mosaic Stadium the last few years. Nick Arbuckle steers an offence that’s capable of explosive plays and while the Argos’ defence isn’t likely to get to the QB a lot or haul in interceptions, it does limit the run and pass game. If Fajardo is on the field on Friday, he’ll have to be sharp to keep his team from losing its third straight game.

Michael Reilly and Vernon Adams Jr. headline a game that has the potential to be a shootout, with a pair of pivots that love to sling the ball and look for the big play. If you’re Adams, though, those big plays will have to be calculated risks. The Lions lead the league in interceptions, with eight and you know BC’s secondary is salivating over the opportunity to add to that total. The Alouettes’ defence isn’t to be taken lightly, either. They’ve got five interceptions this year and the Als’ lead the league in points scored off of turnovers (41). On the undercard of the Reilly-Adams main event: A returner showdown between Lucky Whitehead and Mario Alford.

The Bombers are rolling, locking teams down defensively and putting them away on offence. They take their dominant show to Edmonton this week where the Elks are not quite on that level yet. We thought Edmonton’s offence had roared into the 2021 season at Labour Day, only to watch it fail to get in the end zone a week later against Calgary while offering up Trevor Harris as tribute to a hungry Stamps’ defensive line. The Elks will likely play better this week, but until they have that weekly consistency, it’s hard to confidently take them against a powerhouse team like the Bombers.