Party in the Hammer: Spirit of Grey Cup set to take over Hamilton

Party in the Hammer: Spirit of Grey Cup set to take over Hamilton

TORONTO — The Canadian Football League (CFL) is inviting football fans from coast-to-coast-to-coast to take part in the festivities during Grey Cup Week in the days leading into the 108th Grey Cup on Sunday, December 12 in Hamilton. Several events will open their doors free of charge as the CFL celebrates the beating heart of the league – its fans.

“The past 20 months have seen our incredible fans, the country and the world face unprecedented challenges,” said Duane Vienneau, Chief Grey Cup and Events Officer of the CFL. “Ahead of the big game, this year’s Grey Cup Week will be all about fun, joy and Canadian football. We’re excited to safely gather our fans to celebrate the power of our league and our game to unite people. And we can’t think of a better way to bring about that togetherness than opening our marquee events free of charge.”

“Excitement is building in Hamilton and throughout the region as we get closer to hosting the 108th Grey Cup right here at Tim Hortons Field in December,” said Matt Afinec, President and Chief Operating Officer of the Tiger-Cats. “We can’t wait for our great fans to get a taste of the Grey Cup fever that comes with the fan festival events at the Hamilton Convention Centre, and we look forward to hosting fans from across the country in our great City.” 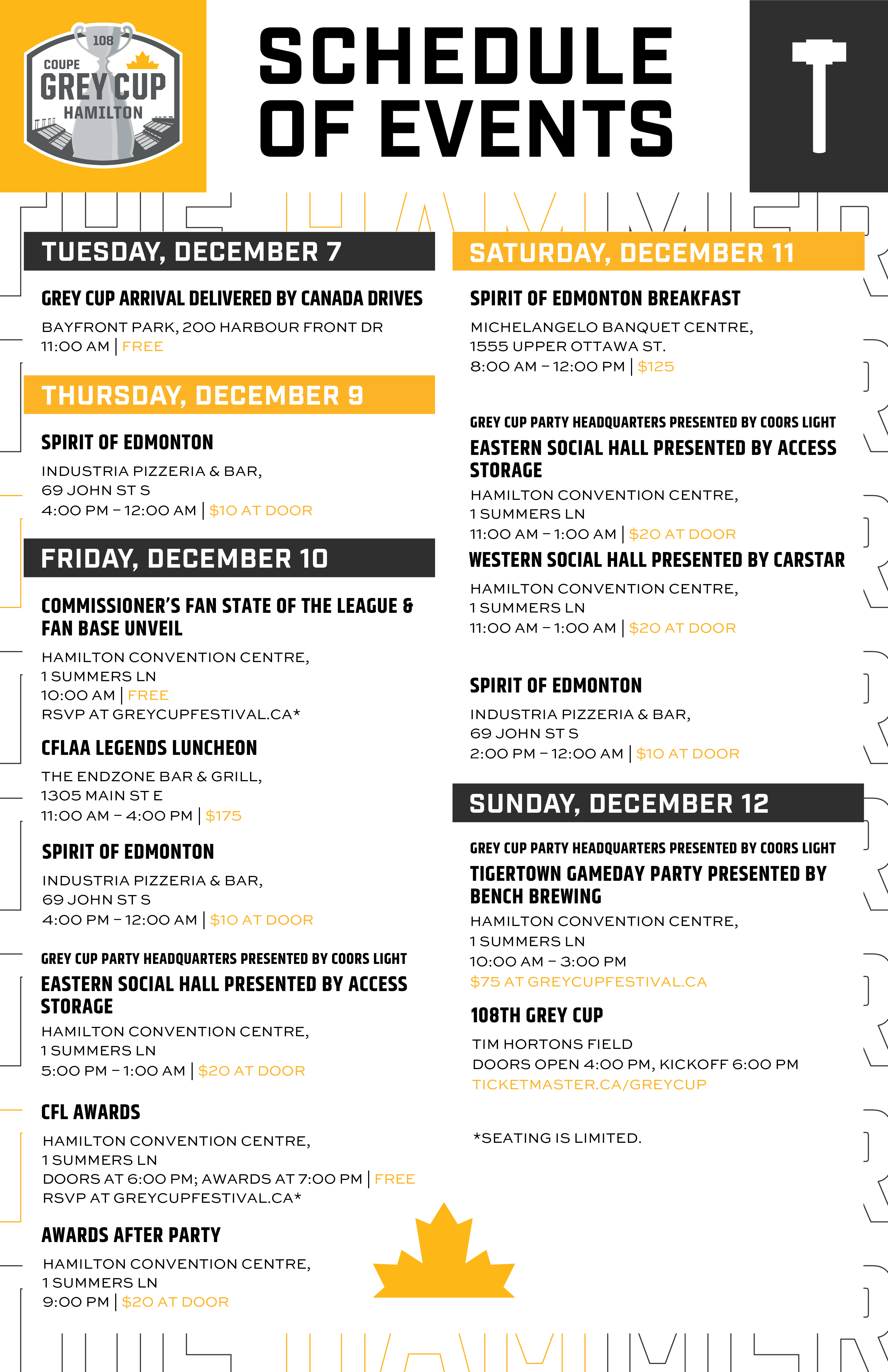 The Hamilton Convention Centre will be the official home to several events and celebrations throughout the week. The Eastern Social Hall presented by Access Storage will open Friday night from 5 p.m. to 1 a.m. and Saturday from 11 a.m. to 1 a.m. and the Western Social Hall presented by CARSTAR will open Saturday from 11 a.m. to 1 a.m., as fans celebrate CFL football ahead of Grey Cup Sunday. Tickets can be purchased for $20 at the door.

A pre-game party 25 years in the making, TigerTown GameDay Party presented by Bench Brewing and in partnership with the Hamilton Tiger-Cats Alumni Association will be held at the Hamilton Convention Centre on Sunday, December 12 from 10 a.m. to 3 p.m. with $75 tickets available now at ticketmaster.ca.

The Convention Centre will open its doors to CFL fans on the morning of December 10 for the commissioner’s annual address. Beginning at 10 a.m., Commissioner Ambrosie will provide an update on the direction of the league and take questions from members of the audience.

With so many of the CFL’s passionate fans in attendance, the league will also take the opportunity to unveil the Grey Cup Fan Base – a stunning new base on which the Grey Cup will stand, in recognition of the fans who form the foundation of the CFL. Seating is limited and fans are invited to reserve their spots now for the free event at greycupfestival.ca.

For the first time since the league began recognizing the premier performances of players and personnel, the awards ceremony will be free and open to the public. Beginning at 6 p.m. ET on Friday, December 10, the Hamilton Convention Centre will play host to the league honouring the best and brightest stars of the 2021 season. Seating is limited and fans are invited to reserve their spots at greycupfestival.ca. Immediately following the CFL Awards, the Awards After Party will kick-off with $20 tickets available for purchase at the door.

“Grey Cup Week may look a bit different this year,” added Vienneau. “But at every turn, you’ll still see fans proudly wearing their favourite teams’ colours, you’ll still hear boisterous conversations about how their fandom came to be, and most importantly, you’ll still feel the passion and love for the league that flow throughout the CFL family.”

In addition to the many Grey Cup Week celebrations, CFL fans are encouraged to immerse themselves in the City of Hamilton’s thriving arts, culture and culinary scene. For more information, visit Tourism Hamilton.

Fans will be required to show valid proof of vaccination and follow health and safety protocols in order to attend all Grey Cup Week events and the championship game. For the latest news, information and a complete listing of all events during Grey Cup Week, please visit greycupfestival.ca.

A limited number of tickets for the 108th Grey Cup on Sunday, December 12 at Tim Hortons Field, featuring Arkells in the Twisted Tea Grey Cup Halftime Show, are still available at ticketmaster.ca/greycup.