Begelton vs. Williams: Who will make a bigger impact? 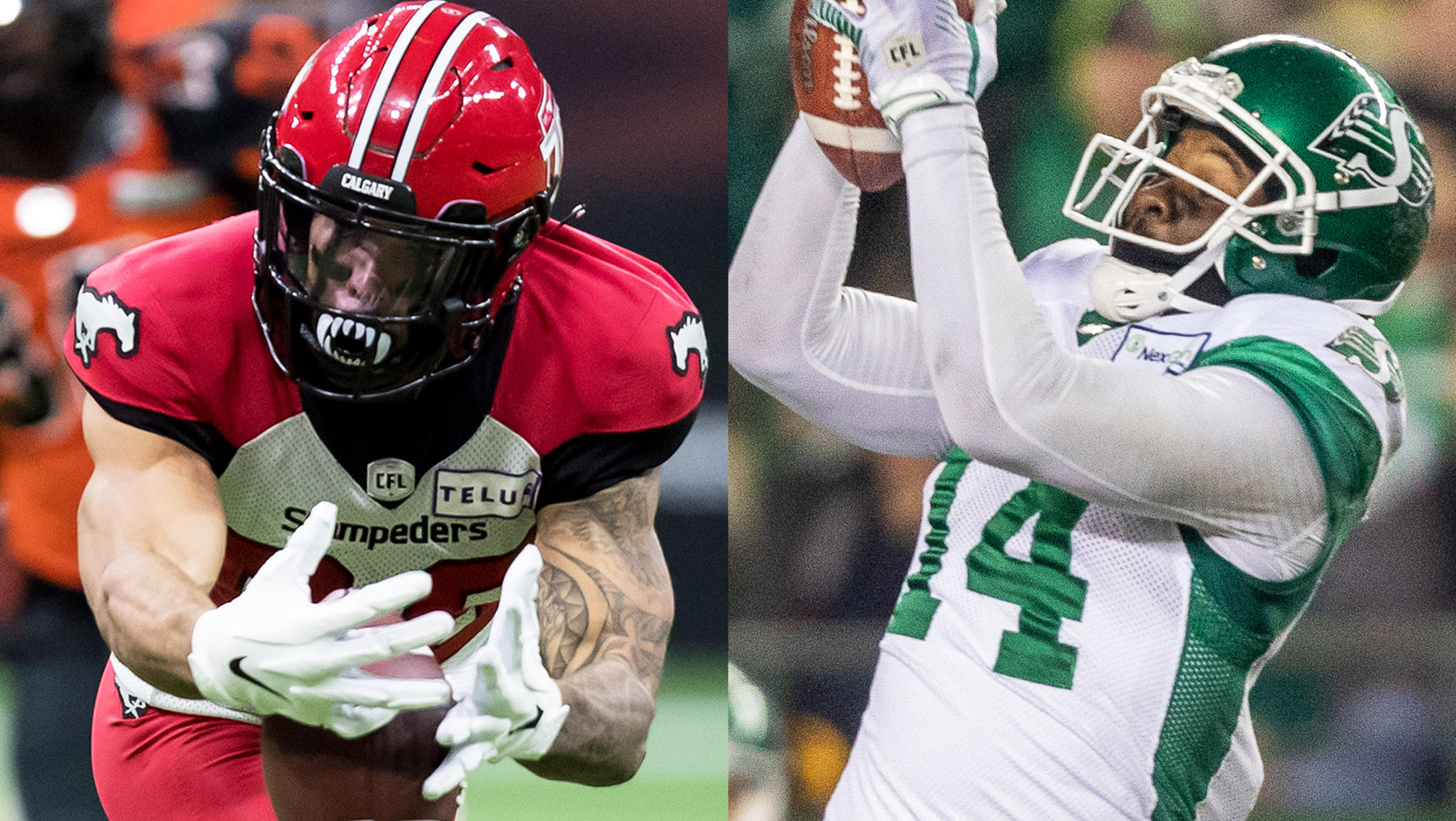 Begelton vs. Williams: Who will make a bigger impact?

Sunday’s Western Semi-Final presents itself as a stage for some of the best position battles seen this season. From the calm, accurate Calgary Stampeders’ signal-caller Bo Levi Mitchell countering the dual-threat talent of Saskatchewan Roughriders’ Cody Fajardo all while under the Dickenson brothers’ sibling rivalry, the game will have no shortage of battles to watch.

Where CFL.ca‘s Marshall Ferguson’s attention was drawn was to the skill positions as he broke down who he thinks between Reggie Begelton and Duke Williams will have the greatest impact.

Entering the playoffs, both receivers have had similar seasons in a sense as they both returned to the CFL following time south of the border.

After re-joining the Riders after spending time with the Buffalo Bills, Williams’ impact on the Riders’ offence has been palpable. Showing flashes of what made him a CFL All-Star in 2018 where he amassed 1,579 receiving yards for 11 touchdowns, Williams has presented himself as a deep threat the Riders brought in at the right time. As a result, Ferguson notes that Williams’ presence has allowed Fajardo to stretch the field.

Inconsistency with the deep ball has been a narrative of the Riders’ offence this season which sparked the singing of Williams. Following a Week 10 loss to the Stamps where Fajardo threw for 191 yards with his longest completion being 33 yards, he identified the need for a receiver that can make those contested catches.

“You look at the numbers: 3/34 on the year for Fajardo on passes of 30 yards or more down the field to anybody not named Duke Williams,” said Ferguson. “That’s a completion percentage of just 8.8 per cent – that is not going to get it done in the playoffs when you need some of these big, splashy plays to open up the ball game.”

“How many catches for Willams on passes thrown 30 yards or more in the air? Three,” continued Ferguson. He has half of the six catches of 30 yards or more in the air so far this season. He’s only played in four football games, folks. He has an absolute chance to crack open this offence and give them the full potential of Fajardo’s arm to pair nicely with his legs. Will we see it? Jason Maas is certainly going to give him the opportunity as the Riders’ offensive coordinator.”

As for Begelton, the 2019 CFL All-Star and the league’s-leading receiver has had a similar effect on his team after returning to Red and White from his time with the Green Bay Packers. Before his stint in Titletown, Begelton racked up 1,444 yards and 10 touchdowns and has since recorded 144 yards and a touchdown in just a pair of games back.

Looking back to that 2019 season, Ferguson outlined just how nearly automatic Begelton was when targeted and how this season has been a different story.

“In that season, Begelton was catching 70.1 per cent of the passes that he was targeted on,” said Ferguson. “This season thus far back in Calgary, just 9/19 targets have been caught, good for 47 per cent. It is an inefficient attack and they have really been feeling this out with Mitchell trying to get the chemistry back for them; get them into a rhythm, get the efficiency and timing. It takes a little back to get that back.”

Though the reunion between Mitchell and Begelton has not been as impactful as predicted, Ferguson outlines that their connection on the field has not been all but lost.

“In 2019, Begelton was catching passes for 14.1 yards-per-catch,” said Ferguson. “In 2021, on those nine catches that he has so far, it’s 14.7 – he’s actually creating more offensively they just have to get on the same page, be more efficient and if he does, Begelton will have every opportunity to influence this offence.”

Coming down to who Ferguson thinks has the opportunity to make some big plays, he explains why when the Riders are not putting the ball in William Powell‘s hands, he wouldn’t be surprised to see it in Williams’.

“At some point, they’re going to have to lean on their receivers and yes, it is Shaq Evans and it could be the Canadian-contention of Kian Schaffer-Baker, Brayden Lenius, Justin McInnis. But I think it’s really going to come down to whether or not they can land a hay-maker with Williams. I think Duke has an opportunity to be the game-breaker that Saskatchewan brought him in to be.”