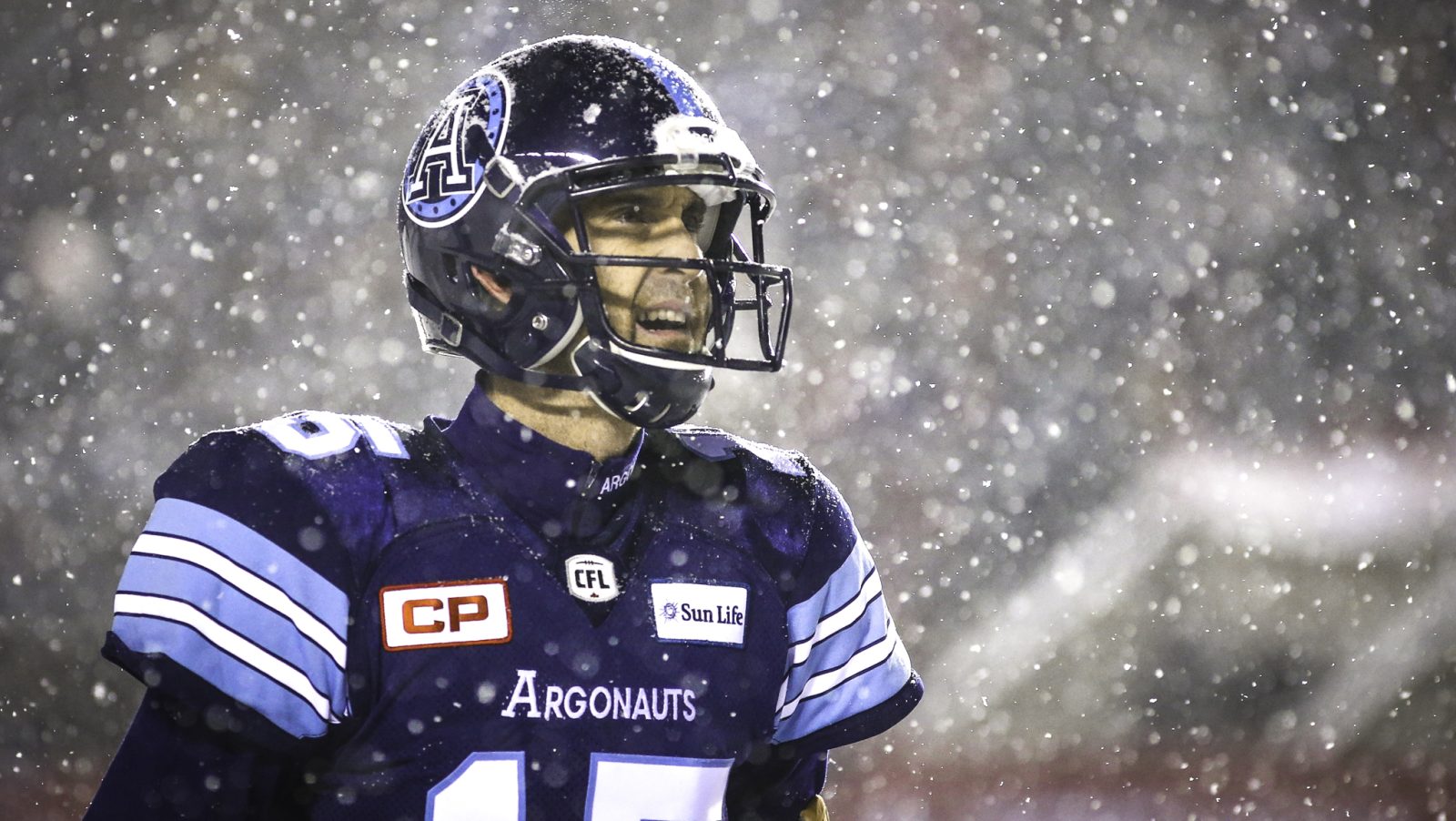 When Ricky Ray was introduced as the new quarterback of the Toronto Argonauts on that December day back in 2011, the official announcement was made at a media conference held high above the city, in a restaurant housed in the CN Tower. Directly below was the Rogers Centre, the site where in less than a year following Ray’s arrival, the 100th Grey Cup would be played. The Argos wanted to be in that game, badly.

No pressure. Just a very on-the-nose metaphor for the lofty expectations the organization had for Ray after a shocking trade brought him to Toronto following nine seasons in Edmonton.

Ray met those expectations, and he needed to battle his way through frustration and a lot of pain in order to do it. Act II of his illustrious career – the years spent as a Toronto Argonaut – was just as rich, championship-wise, as was Act I in Edmonton, but it came with much more physical tribulation, the likes of which would test Ray to his limits, shining a light on the quiet quarterback’s resolve and his resilience, and his willingness to keep sacrificing his body as long as he could.

Ray set the Argos’ record for all-time passing yards (20,205), completions (1,757) and touchdown passes (114) while leading the team to two Grey Cups – including a victory in that centennial edition game – during his seven seasons in Toronto. His time in double blue was marked by what was already his well-established trademark calm and cool demeanour as well as his already illustrated abilities of dropping in perfectly-thrown deep corner route passes, perhaps better than anyone in the history of the CFL. Yardage, touchdowns, championships. That was Ricky Ray in Edmonton and that was Ricky Ray in Toronto. He could go into the hall twice, really, if you were to split his career into two.

If Ray’s tenure in Toronto was one of success, it was also one of great frustration. That was due, first, to the then 32-year-old quarterback needing to re-invent how he processed the game when the ball was snapped. Then it was due to a gauntlet of serious injuries that severely diminished his playing time while simultaneously illustrating an under-heralded quality that the native of California often displayed during his career; his toughness.

The 2012 season wasn’t what you’d call a stem to stern rip roaring success for Ray and the Argonauts, though it did end in confetti and champagne. Rather, it was one that started slowly and continued in a pedestrian kind of way. That season, Ray wasn’t the dominant passer he’d been while with Edmonton and it turned out there was a very good reason for that. At the time, Toronto head coach Scott Milanovich asked that Ray fundamentally change the way that the veteran had been reading defences, in order to fit into the schemes and philosophies that Milanovich was employing with the Argos.

It wasn’t going well and the Argos and Ray were struggling. Ray, however, never was heard to utter a discouraging word. He merely kept working away, with the promise that the tumblers would eventually click. And click those tumblers would, late in the season, with Ray beginning to dominate once again, leading the Argonauts to the storybook Grey Cup win they’d been seeking.

But there was a harbinger of things to come for Ray and his health during that season. The veteran missed a number of games due to injuries. At the time, that turned out to be an advantageous thing, as an inactive Ray had time to process what was still a relatively new offence to him, as he nursed a knee injury during September and into October of that year. In the seasons to come, the injuries would get more serious, and that’s where Ray’s tenacity and pain threshold would be tested, not to mention his abilities in keeping frustration from boiling over.

In 2013, Ray was crushed into the turf during an August game against Calgary, and damage to his throwing shoulder was diagnosed; he’d suffered a couple of different muscle tears and some fraying of the rotator cuff. Those injuries would dog him for more than two years, with Ray gutting out discomfort and pain when he returned late in the 2013 season, and doing it again for the entirety of the 2014 season, when he was named the East Division’s nominee for Most Outstanding Player for the second year in a row. After that campaign was over, Ray had the surgery he’d needed all along and rehabbed for almost the entire 2015 season, returning in October of that year when the Argos’ offence had begun to sputter in his absence. He still wasn’t a hundred per cent.

But he was, thankfully, practically back to feeling normal in 2016 when he then missed three weeks with a knee sprain and six weeks more when he suffered a broken rib and partially collapsed lung during a Labour Day game against Hamilton.

It’s the perception of Ray through all these injuries where his Toronto tenure can be a bit murky for some, those who began to dismiss him as ‘fragile’ or ‘injury-prone.’ Some even called him ‘soft.’

Ricky Ray's career through the lens

But that assertion is a silly one, as a closer look at Ray’s determination through those injuries reveals a physical toughness for which he ought to get more credit. He jacked up 620 pass attempts during the 2014 season, painful shoulder and all. Just kept going out there, just kept throwing. And the thing about those 2016 lung and rib injuries is that they very likely happened during the third quarter of that Labour Day game, and Ray finished the game despite the seriousness of those injuries.

Thankfully, for Ray’s sake, 2017 would turn out to be a relatively healthy year, and in an echo of his first season in Toronto, the Argos would catch fire at the right moment, winning another Cup after Ray first engineered a last minute, game-winning drive to steer the team to an Eastern Final win the week before. And once again, he was named the East Division’s MOP, marking the third time he’d been awarded that distinction.

That winter wonderland Grey Cup would have been a more suitable ending for Ray than what awaited him the following year, when he was seriously injured once again, during the second game of the season, once again against Calgary. This time, there would be no comeback. Truthfully, I think many of us were relieved that Ray didn’t try one more resurrection after that one, grateful for the performances he’d given us and thankful that an all-time great would no longer be putting long-term health on the line.

And, yes, it is marked by those too frequent occasions when he was writhing on the turf, another painful injury scuttling what might have been had he only remained healthy for longer stretches during his time in double blue.

But those injuries tell just part of the tale. It’s the determination and resilience that come in their wake that give you the entire picture when it comes to Act II of Ricky Ray’s hall of fame career, in Toronto.