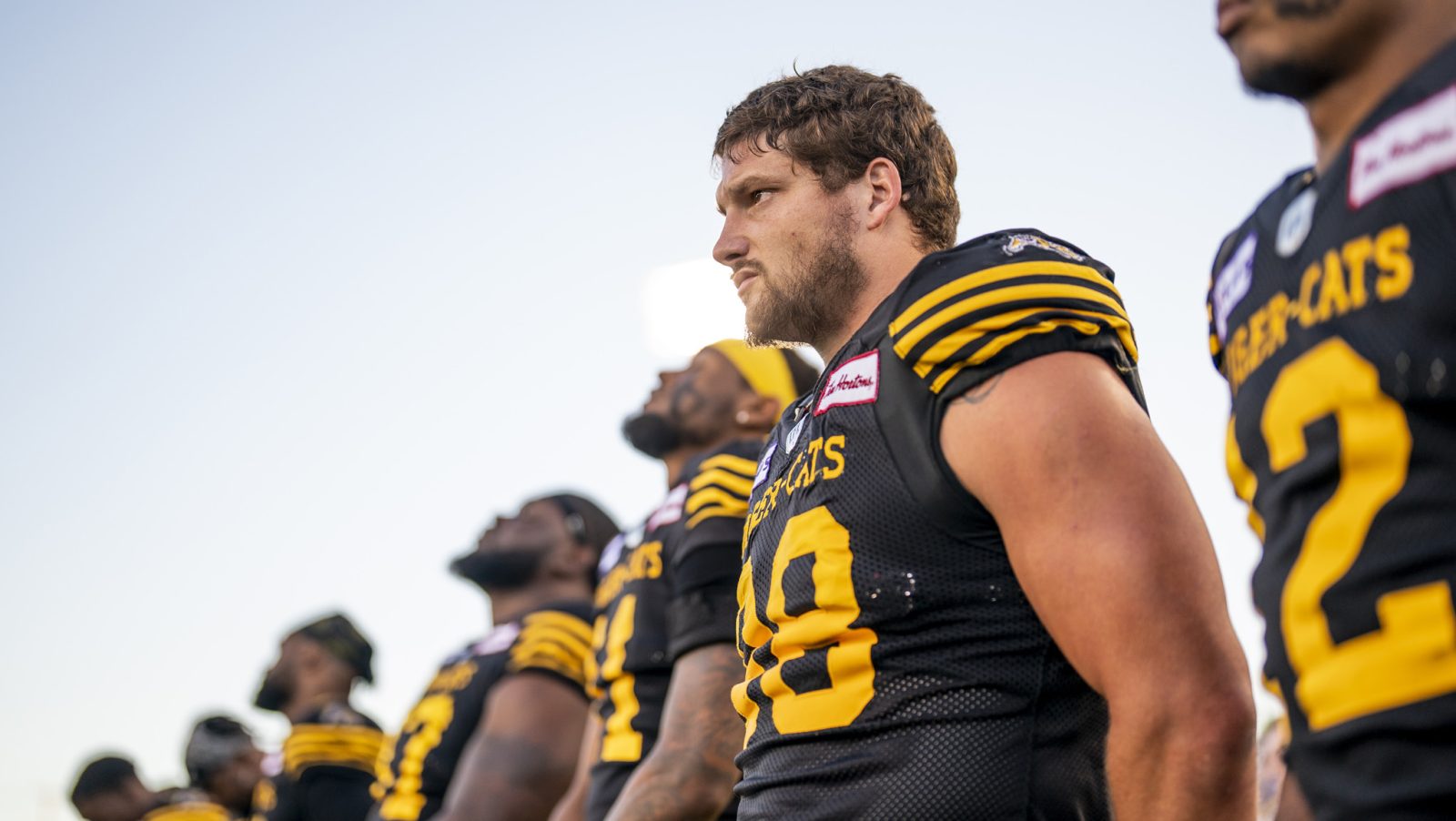 Helloooooo, Newman. Heck of a job you did coming in cold for the third quarter against the Argos like that, Jamie. Third string quarterbacks don’t get lots of reps so that ain’t easy. Kept the Ticats in it and then when Matthew Shiltz was back in, you daggered the double blue with a 30-yard run to set up the winning score. As a certain New York City postal worker once said to Keith Hernandez: Nice game, pretty boy.

Here are the Week 10 takeaways.

THE OPERATION WAS A SUCCESS, DOCTOR. ACTUALLY, ALL THREE OPERATIONS WERE

The Hamilton Ticats were destined, it seemed, to keep walking the earth this season in a second half stupor, doomed to being outplayed and outscored by their opponents, particularly in the fourth quarter.

Head coach Orlondo Steinauer had tried everything, it seemed, to get his team to fire on at least one cylinder in a second half, somewhere, sometime, but to no avail.

Until Friday’s win over the visiting Argonauts, that is.

The Ticats got not one, not two, but all three cylinders banging, moving the ball in a variety of ways on offence, throttling the Toronto attack with a bruising and malevolent defence and winning pretty well all the special teams battles as well.

“We had a chance to allow negativity and things like that to enter in,” said Steinauer, “and really to go into a lull. Proud of the whole football team.”

BONUS TAKEAWAY: I might be wrong. Belief might not be the greatest force in football. It might be Darnell Sankey or Adam Bighill torpedoing across the line of scrimmage on short yardage.

He says he thinks he’ll have to wear a “clunky” knee brace the rest of the year, but Saskatchewan quarterback Cody Fajardo seems to be alright with that, provided he can move like he did in the Roughriders’ 34-23 win in Edmonton.

After rushing for 51 yards and two touchdowns, Fajardo was all Smiley McSmilerson during his post-game media conference. After a few weeks of noticeable limping, he looked more like his usual self on Saturday night; which is to say he was much more like the spinning and sprinting escape artist we’ve come to know. The bye week was good for him.

“I took a few shots on it and didn’t feel anything,” said a grinning Fajardo. “Didn’t have any setbacks in the game. There was a few times I got twisted up on my knee and I got up and had no issues with it.”

“I’m feeling good,” Fajardo said. “I feel like I had my explosion back.”

BONUS TAKEAWAY: A running Taylor Cornelius seems like a pretty good thing too.

I don’t get it. I just don’t. Why have so many teams continued to line up offside when the opponent is scrimmaging from the one-yard line?

There’s a big, thick stripe right there that you know you’re not allowed to go over prior to the snap. At all. You can’t miss it. And officials have been calling this with zero tolerance all season – longer than that, actually – so it is long past time that this ought to be seen as a shocking development by players.

Even the team that has so far been the class of the league can show it has not been inoculated against that kind of mistake as Winnipeg’s Donald Rutledge Jr. (who has been having a very, very good season) dipped his toe over the goal line and into the neutral zone when the Montreal Alouettes, trailing 14-7 with two-and-a-half minutes to go, got stuffed on third down. It was an incredible, brute force goal line stand, spearheaded by just an outstanding play by middle linebacker Adam Bighill.

Offside though. Cue a fresh set for the Als, and the Montreal touchdown that followed.

“We’ve seen so many other teams make those mistakes,” lamented Bighill after the game. “And we talk about it so we don’t have to make that mistake but, unfortunately, we did.”

“That was a play that definitely came back to bite us. That was a critical moment that we needed that we didn’t get.”

Bighill didn’t complain about the call and it’s a credit to him that he did not.

Just look down. The line’s right there, man.

BONUS TAKEAWAY: The goal line defence of a Winnipeg crowd is as stout as their team’s is. That was a heck of a denial of Montreal’s Dominique Davis as he tried to climb the wall after his touchdown. Impressive.

When Blue Bombers’ kicker Mark Liegghio shanked a 32-yarder that would have won the game for Winnipeg, you could see a wide range of disappointed, contorted, exasperated faces both on the field and in the crowd.

But not Winnipeg head coach Mike O’Shea. The camera caught his reaction and it was nothing short of utterly disciplined. No anger, no grimace, no eye roll, no bending over and placing his hands on his knees as though he’d just been gut-punched. His expression changed not a bit; he merely adjusted his headset and I think he said “overtime” to those in the vicinity.

When Liegghio hit the upright in OT, O’Shea may have grimaced slightly. May have. Slightly. Maybe. Perhaps.

If that sequence of events could not make O’Shea surrender to the outward displays of football frustration that we’ve seen from so many coaches over the years, then nothing will.

Call off the search party. Mike O’Shea ain’t gonna crack. There are so many disciplined consistencies in the ongoing performance of the Winnipeg Blue Bombers but none as impressive as their head coach’s game face.

BONUS TAKEAWAY: Quick reflexes and good hands on that Tyson Philpot. Watch the missed field goal again and zero in on how the Montreal rookie gets his hands up to snag that weirdly bouncing ball when it suddenly jumps on him. Any bobble there and the Bombers likely get him in the end zone.

BONUS BONUS TAKEAWAY: Calgary’s Jalen Philpot caught three passes for 54 yards and a touchdown, on Saturday. Averaged 47 yards on three kick returns, too. Oh, how I am going to enjoy watching these two try to one-up each other over the next ten years.

IT MIGHT BE A. BUT I THINK IT’S PROBABLY B

TSN analyst Davis Sanchez asked a good question during a panel discussion following the BC Lions’ 41-40 win over Calgary. Is Nathan Rourke A: young and naive? Or B: Just fearless?

In shaking off a rough start against the Stampeders – with two interceptions thrown in the first half – Rourke led the Lions back in the second half and included two long completions on third down to keep drives not only alive, but thriving. And another on a second and 10 conversion from midfield on the drive that led to the winning field goal. (NOTE: Bryan Burnham and Lucky Whitehead both get medals for terrific catches in those scenarios.)

Maybe you do that stuff if you’re merely oblivious to the danger of those situations, but Rourke wasn’t and isn’t, so I’m taking B as my answer. Seems that as great as his physical talents are, Rourke’s ability to centre himself might be his most impressive trait.

“If you’re into mindfulness and living in the present,” said BC coach Rick Campbell, “he can teach classes on that to all of us. He literally lives in the moment.”

Come to think of it, the answer to Sanchez’s question is “neither A nor B.” Maybe Nathan Rourke isn’t naive nor fearless. Just methodical and determined.

AND FINALLY... You’re kinda freaking me out with this Pennywise the Clown thing, Loucheiz Purifoy. But that’s probably the point.