TORONTO — Donnovan Bennett hosts a special Diversity Is Strength Conversations episode this month, as we approach the National Day for Truth and Reconciliation in Canada on Sept. 30.

Bennett, the host of The Waggle podcast, is joined by Brian Chrupalo, longtime CFL official and the first official in league history to make a penalty announcement in Ojibwa. He is also joined by Sts’ailes First Nation member and BC Lions’ defensive back Jacob Firlotte, and Edmonton Elks’ in-game host Ashley Callingbull, who was born in Enoch Cree Nation and is the first Indigenous woman to win the Mrs. Universe title.

The trio of guests gathered for an insightful and important conversation surrounding truth and reconciliation in Canada. They discussed its meaning, how we can continue to educate ourselves as a country and how sport can be used as a vessel for positive change. 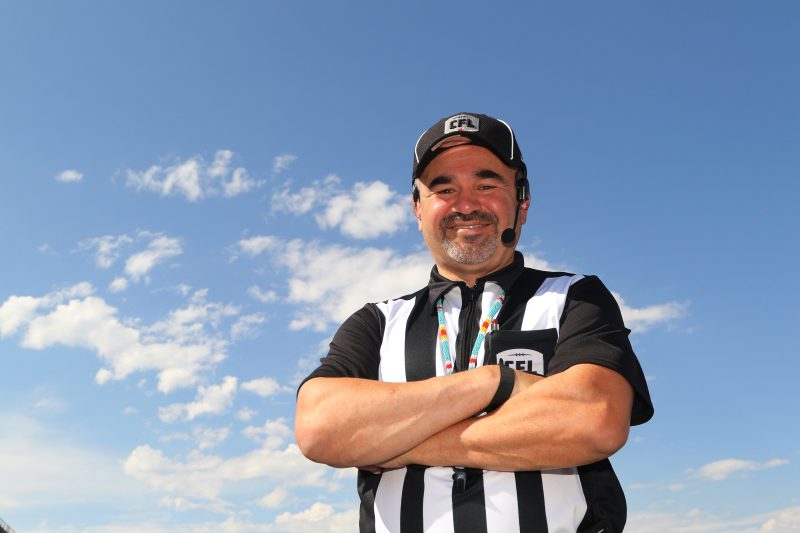 CFL official Brian Chrupalo is now in his 19th season with the league. Chrupalo will be calling penalties in Ojibwa on Sept. 30 (Dave Chidley/CFL.ca).

As Bennett explains, the National Day for Truth and Reconciliation is different than other national days on the calendar year in Canada. It’s a day to encourage conversation and education, as well as reflection and understanding.

“Unlike many civic holidays where people just take the day off, it’s important to use the time to speak truth, to eradicate some of the lies or lies of omission that have been told about the first inhabitants of our land, but also to reconcile with those truths,” he said.

Bennett started the conversation by the asking the trio what the words truth and reconciliation meant to them. For Chrupalo it’s a time for conversations and a time for understanding. He said that he felt it is important for all Canadians to understand the truths of the country’s past.

“I think it’s important for all Canadians, not just Indigenous people to understand that there were things that happened that shouldn’t have happened.”

Callingbull echoed the Chrupalo’s sentiments, stating that it is a time of acknowledgement.

The Elks’ in-game host also felt that reconciliation is an opportunity for non-Indigenous Canadians to be allies and that working together as communities is the only way to achieve a better future for all.

“With reconciliation, to me it’s about non-Indigenous people being allies, and they can be allies in so many different ways and first it’s by educating themselves. The most important thing is not just speaking up, but showing up. That’s the only way we can work together in creating a better future.”

“Indigenous people, we aren’t the ones that have to reconcile, that’s for the settlers to do,” said Firlotte. “That being said though, we still have a lot of work to do on our behalf as well, of course. There’s immense healing to be done from recovering from genocide.” 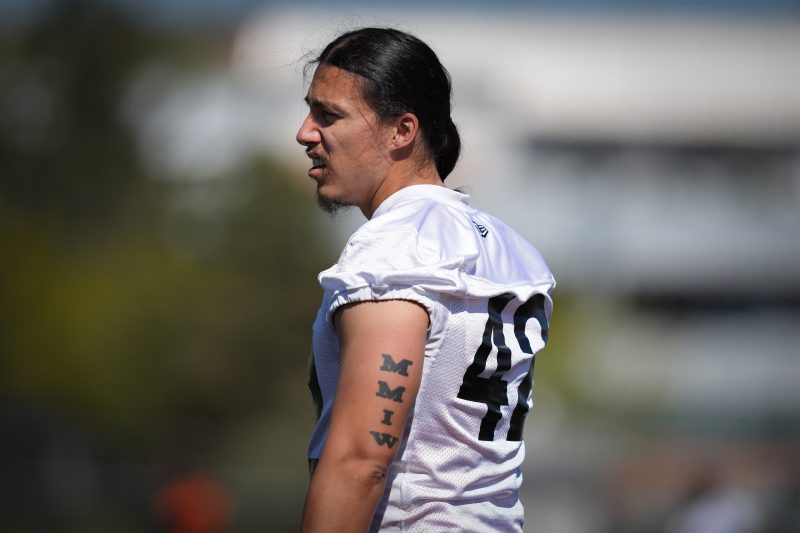 Defensive back Jacob Firlotte joined the BC Lions in May of 2022 and dressed for the team’s Week 12 matchup against the Saskatchewan Roughriders (The Canadian Press).

The Lions’ defensive back also felt that even with the progress that has been made, that there are still those who wish to merely see the National Day for Truth and Reconciliation come and go. He feels that some simply go through the motions without affecting any change.

“Definitely, although it is a start compared to the last decade,” said Firlotte. “But yes there’s definitely still people that want to bypass it and go through the motions and not do the nitty gritty work and just have a symbolic victory without actual systemic changes.”

The difference he is trying to make reaches far beyond the football field and Firlotte knows that he can utilize his platform as an athlete to help make a difference.

On the back of his left tricep Firlotte has “MMIW” tattooed on his arm, which stands for missing and murdered Indigenous women. As a member of Sts’ailes, Firlotte wants to use his platform to help provide education and establish a culture where women can again feel safe.

“As a player I already know that I’d be used as a billboard in a sense,” explained Firlotte. “So I figured might as well try to make a difference with it, so that’s what led me to getting that tattoo and just correcting that entire culture.”

As Bennett explains in the conversation, sport can be a powerful vessel for enacting positive change and that sport, the CFL more specifically, is part of the reason each had gathered for the conversation. However, both the host and guests agreed that there is still much work to be done across all levels of football and sport in order to affect further change.

Chrupalo detailed the many encouraging steps being taken by the league to encourage inclusion and facilitate education, explaining that last season the officials wore orange ribbons in September and that they wore beaded poppies to honour indigenous veterans on Remembrance Day. He also felt that despite the initiative taken, there need to be avenues that provide subsequent steps.

“Those are a lot of little things that start conversations, (but we) need to have more people being educated,” said Chrupalo. “To educate more than just the Indigenous people, we understand what those mean. We need other people to understand as well. It’s a good first step, but we just need subsequent steps that come with that.”

Chrupalo also commended the Elks organization for airing a Cree language radio broadcasting of their Week 7 home game against the Winnipeg Blue Bombers. Chrupalo also mentioned that he will be officiating the Sept. 30 game in Winnipeg and that he would be announcing the penalties in Ojibwa for the first time in league-history. 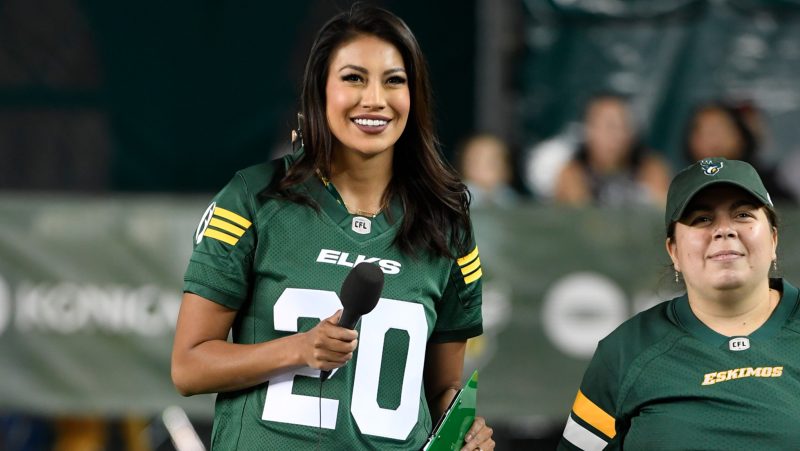 When first approached by the Edmonton Elks, Callingbull admitted that she was initially hesitant. She had grown up going to CFL games, but said that she didn’t want to be tokenized as an Indigenous in-game host. She wanted to see the organization affect real change and she wanted her voice to be heard.

Since joining the Green and Gold, Callingbull said that working with the Elks has been a tremendous experience and that she’s proud of the work that the team has been doing in the community.

“It took a lot of talking and a lot of conversations about, ‘What change are you going to make within? What things will you implement?'” said Callingbull. “For me, I want to see the work done and I want my voice to matter and they have been on the ball with everything I have been suggesting. With the Elks, the whole organization has been great to me, and it’s nice. It’s nice to be seen and heard and them actually doing the work.”

The National Day for Truth and Reconciliation in Canada is Friday, Sept. 30. There will be two CFL games that night. The Winnipeg Blue Bombers will host the Saskatchewan Roughriders in the game that will be featuring Chrupalo officiating in Ojibwa. While Firlotte and the Lions will host the Ottawa REDBLACKS.

BC’s game on Sept. 30 against Ottawa will also be the team’s Orange Shirt Day Game, which provides education and brings awareness to truth and reconciliation. The first 10,000 fans will receive a free Orange Shirt with a reimagined BC Lions logo designed by Indigenous artist Corrine Hunt.