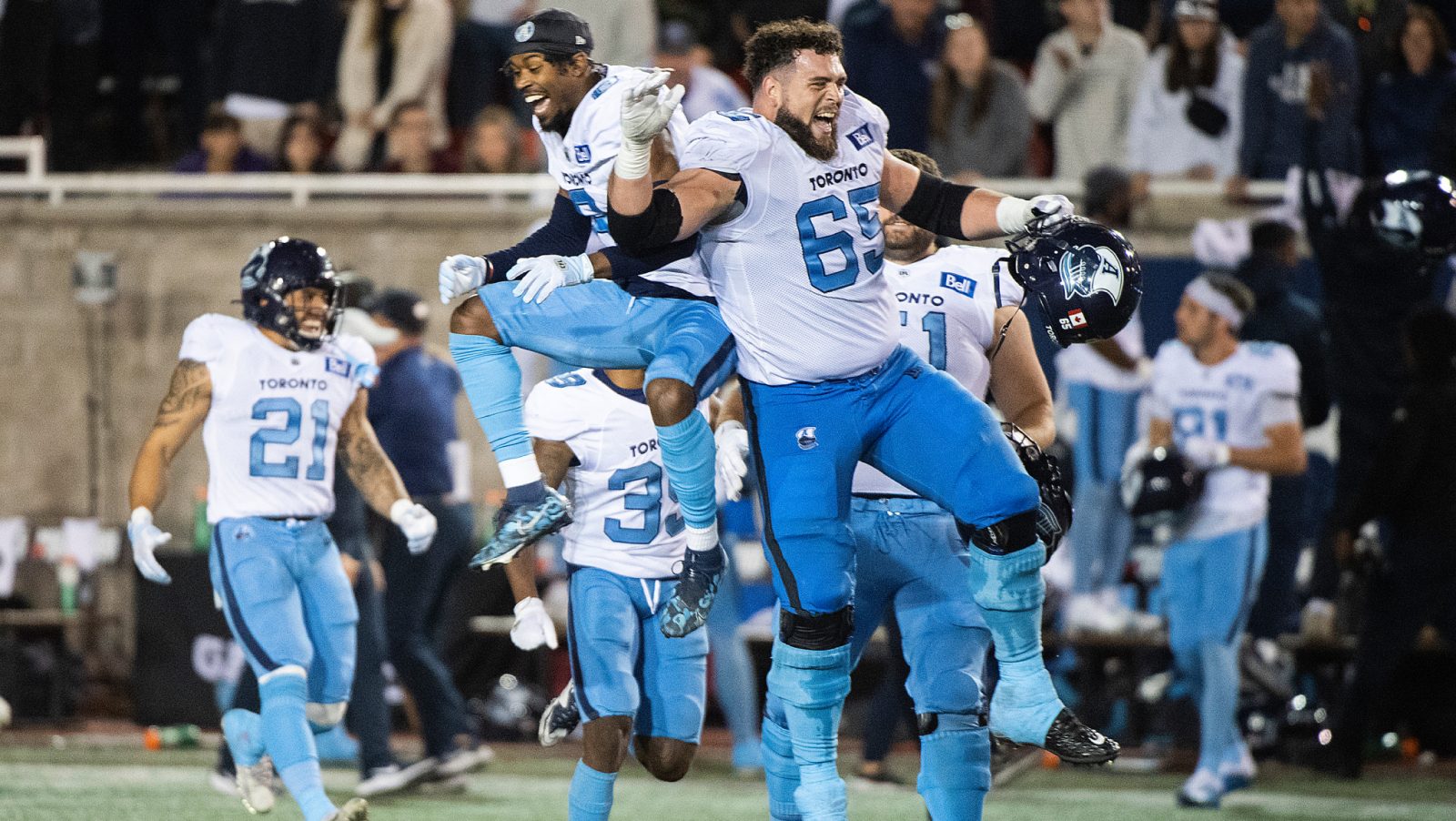 MONTREAL — The Toronto Argonauts claimed their second consecutive East Division title with a 24-23 victory over the Montreal Alouettes on Saturday.

The Argonauts have now earned the right to host the Eastern Final on Nov. 13, putting them two wins away from their 18th Grey Cup in franchise history.

The Alouettes, meanwhile, will host the Eastern Semi-Final on Nov. 6 at Percival Molson Memorial Stadium.

A missed field goal from the leg of Boris Bede turned into a single which proved to be the difference as time ticked off the clock in the fourth quarter.

McLeod Bethel-Thompson once again steered the offence for the Boatmen by throwing for 240 yards and two touchdowns.

AJ Ouellette built on his strong performance from Week 19, carrying the ball 14 times for 92 yards.

Trevor Harris led the offensive charge for the Alouettes by throwing for 413 yards and two touchdown. He connected with Jake Wieneke and Eugene Lewis for the touchdown passes.

William Stanback supported the offence by carrying the ball 10 times for 65 yards in a losing effort.

The Argonauts won the coin toss but decided to defer, giving the Alouettes the ball to begin the game.

The Alouettes offence went to work with a run from Stanback and completions to Lewis and Weineke to get down to the Argonauts 21-yard line.

In an aggressive move in a must-win game for the division title, head coach Danny Maciocia decided to go for it on third-and-four deep in Argos territory. It was a decision that would backfire as Jonathan Jones picked off Harris’ pass.

After the Alouettes defence forced a two-and-out, Chandler Worthy returned a punt 42 yards to give Harris and the offence strong field position to begin their second drive. Under pressure, Harris completed a pass to Walter Fletcher for a 59-yard gain to get down within the Argos five-yard line. After Dominique Davis was stopped on a short run, Maciocia again decided to go for it on third down and again the Argos defence stepped up and stopped a Jeshrun Antwi rush attempt.

Bethel-Thompson took over on his own one-yard line and led a seven play drive, highlighted by a 34-yard run by Ouellette, that ended with a three-yard touchdown pass to Ambles to open the scoring.

The Argos defence continued to step up in the second quarter, as Samuel Acheampong recorded his first sack of the season to force another two-and-out.

Late in the second quarter Harris found Wieneke for a 49-yard reception as the Als moved onto the Argos half of the field. Later in the drive, and for the third time in the game, Maciocia decided to go for it on third-and-short and Davis converted on a quarterback sneak. The drive would end with a David Cote 42-yard field goal to cut the Argos lead to 7-3 heading into the half.

Javon Leake started the second half with a 50-yard return to set up the Argos offence on the Als 39-yard line. Bethel-Thompson would make good on the strong field position, connecting with Gittens Jr. for a touchdown.

A 14-yard run by Fletcher, followed by an eight-yard run by Stanback opened the Als next drive. An Ali Fayad sack on Harris would cost the Als the chance at a first down and they would be held to a 26-yard field goal from Cote.

The next Als drive would start with a Shawn Oakman sack to push them back to their own one-yard line. The Argos then forced a safety to extend their lead to 10.

When the Als got the ball back, Harris led an eight play drive to end the third quarter and begin the fourth. The possession was capped by a 12-yard touchdown pass to Wieneke to make it 16-13 Argos.

Later in the quarter, Bethel-Thompson looked deep for Ambles but it was Marc-Antoine Dequoy who came down with the interception.

Harris then found Lewis for a 25-yard reception. After five more plays, Cote nailed a 47-yard field goal to tie the game 16-16.

Looking for an answer, Bethel-Thompson took back over and completed passes to DaVaris Daniels and Ambles to get to the Als 49-yard line. On second-and-eight, he found Gittens Jr. for a first down. An illegal contact on a receiver penalty resulted in additional yardage. Chad Kelly then crossed the goal line on a quarterback sneak to take back the lead.

With time ticking off the clock in the fourth quarter, the Alouettes stormed down the field on a seven play drive that ended with a Harris touchdown pass to Lewis to tie the game at 23-23 with :34 seconds remaining.

The Toronto offence took back over for one final possession in regulation. With :5 seconds left on the clock, Bethel-Thompson found Daniels to set up a 47-yard field goal attempt for Bede.

Bede missed the kick wide right, but the Als were flagged for too many men on the field. The Argos declined the penalty and took the single for the win.

Toronto and Montreal will now meet in Week 21 to close out the regular season.