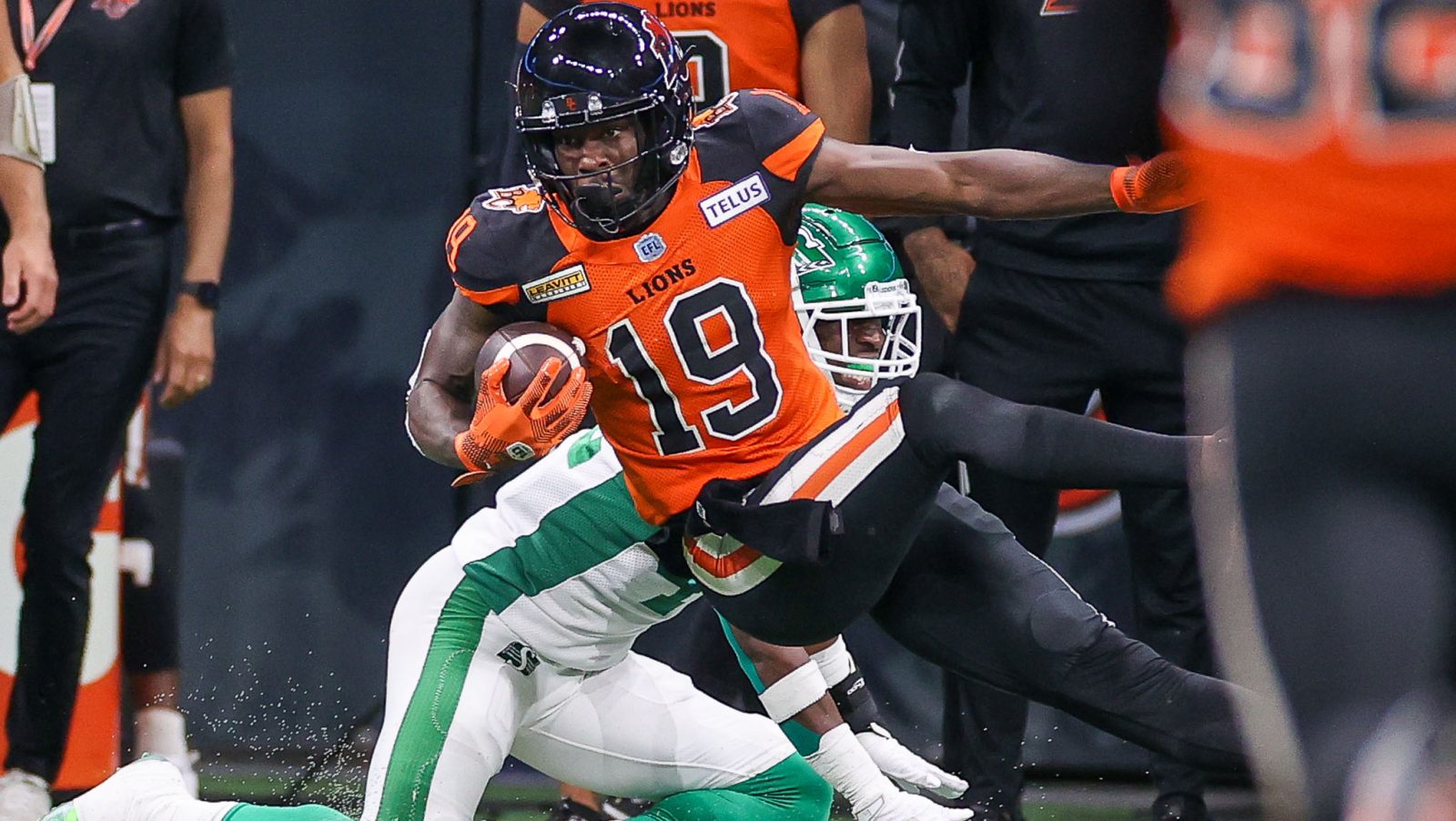 Saturday’s tripleheader is a perfect Grey Expectations day in early September, yet let’s not overlook the start of Week 14 that will see BC coming into Montreal with an ex-Alouette starting at pivot.

Whether it’s Antonio Pipkin ($5,664) or the newly-acquired Vernon Adams ($7,988) remains cloudy, but the intrigue of Montreal’s defence looking to slow down BC’s track meet-style offence will give many fantasy users an early indication of how their lineups will fare.

Just as you’d suspect, this week’s rankings are filled with new faces in unique places as we break down each position with my top-rated selections, complete with another fun-filled trip on a Stacktastic Voyage. 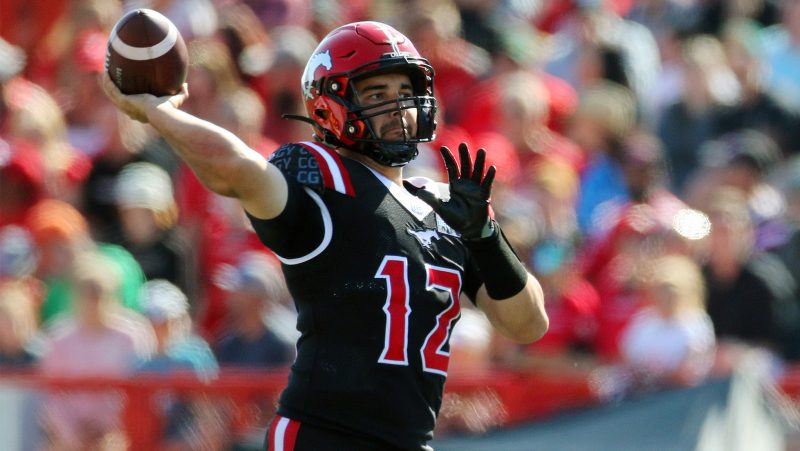 Jake Maier gets another look at the passing TD-friendly Elks’ defence this week and with it, comes the opportunity for a fantasy explosion (Dave Chidley/CFL.ca)

Jake Maier, Calgary ($8,936) — Here’s banking that we’ll see the second half version of Maier from the Labour Day Classic, where he fired off a pair of majors to Reggie Begelton ($8,237) and looked more like the Maier we saw that carved up Winnipeg’s secondary in Week 12. The Elks have allowed a league-high 20 touchdown passes, a number we expect Maier to add upon come Saturday evening.

McLeod Bethel-Thompson, Toronto ($8,480) — Five touchdown passes in his last two games while also distributing the ball in equal portions (20-plus completions in eight of his last 10) is why McBeth is ranked here. The Argos have a league-low three rushing majors, so if the offfence is going to put up points, it’s coming from Bethel-Thompson’s right arm.

Zach Collaros, Winnipeg ($9,421) — His yardage totals may fluctuate but this is certain: Collaros will throw multiple touchdown passes. He’s done so in seven of his last eight games. The Bombers are seventh in passing yards per game, yet are second in average gain per pass. Quality tops quantity, folks.

Taylor Cornelius, Edmonton ($8,702) — Cornelius had a personal-best 18.6 fantasy points from his passing on Labour Day and has avoided interceptions in two of his last three starts. He’s starting to get it, and if he’s able to continue maturing without Kenny Lawler ($9,383), he’s going to be a start-worthy pivot down the stretch.

Antonio Pipkin, BC ($5,564) — Bargain? Yes? Stack potential? Quite a lot, thank you. However, Pipkin is a 54 per cent passer that is 2-5 as a starter and sports a 4-9 TD:INT margin. On the flip side, he’s throwing to the best receiving corps in the league and does have 14 career rushing majors to his credit. Ultimately, the choice to start Pipkin hinges on how short a hook he has, because it doesn’t take much to imagine Vernon Adams ($7,988) making his Lions debut if Pipkin is off to a slow start.

Antonio Pipkin, BC ($5,654) — Then again, Pipkin has been on the roster longer than Adams.

Cody Fajardo, Saskatchewan ($9,569) — One major in his last four starts versus Winnipeg… 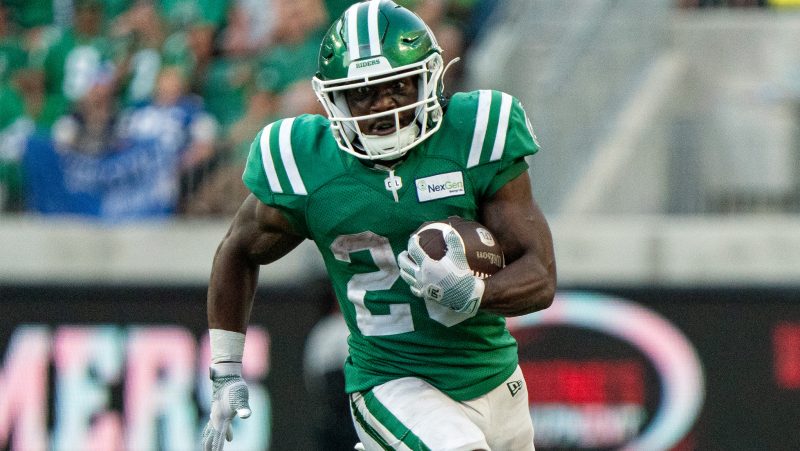 Frankie Hickson is in tough against Winnipeg’s run defence, but he still managed 85 yards on the ground this past week (Riderville.com)

Ka’Deem Carey, Calgary ($9,226) — The best anchor for a Week 14 lineup, Carey gets another crack at the league’s worst run defence. He’s also averaging 9.6 yards per catch, which means he could be devastating if the Stampeders gave him 18-20 touches.

Frankie Hickson, Saskatchewan ($4,306) — Still a very good bargain, Hickson put up 85 yards on 15 carries on the Bombers’ solid run defence. He makes you hold your breath each time he touches the ball, and as gifted as the Roughriders’ receiving corps can be, Hickson is the most dangerous after the catch.

Brady Oliveira, Winnipeg ($6,857) — Oliveira earned every one of his 38 rushing yards against Saskatchewan in Week 13. A rebound awaits him in Winnipeg, where a few touches near the goal line could more than offset what might be another tough day at the office.

Kevin Brown, Edmonton ($4,000) — The rookie from University of Incarnate Word made a lasting first impression with 96 total yards from scrimmage on 11 touches in the Labour Day Classic. Brown brings a much-needed speed element to an Elks’ ground game that has hovered near the bottom all season.

A.J. Ouellette, Toronto ($5,088) — Ouellette has become the hidden gem in the Argos’ passing game, having recorded two games of double digit fantasy production in the last three weeks. Facing a REDBLACKS’ defence ranked eighth in opponents pass efficiency is a good sign Ouellette will make it three out of four.

Devonte Williams, Ottawa ($4,000) — Comes off a Week 13 that saw him rush for 72 yards and add 24 receiving as well. Toronto shares the league lead with Winnipeg with just five rushing majors allowed, but here’s a strong bet Williams finds the end zone this week.

James Butler, BC ($7,342) — He hasn’t scored in more than two months while not recording a run of longer than eight yards in the past three games. There’s no doubt Butler’s overdue for a huge outing, but betting on when that happens is a risky proposition.

Greg McCrae, Winnipeg ($3,500) — Essentially a third receiver to your roster if you use him.

William Langlais, Calgary ($2,500) — Hey, he did lead the Stampeders in kickoff return yardage in Week 13, right?

Dominique Rhymes, BC ($9,541) — Really, should it matter who’s throwing the ball to Rhymes? The league leader in touchdown grabs (nine) has scored double-digit fantasy points in five straight games and has three in which he has scored more than 30 points for his fantasy users.

Eugene Lewis, Montreal ($10,095) — Despite inconsistency from Trevor Harris, Lewis has been a sure bet most of this season. He’s scored at least 18.3 fantasy points in four of his last five games, and as the league’s most targeted receiver, Lewis’ users know he’s getting more than his share.

Jaelon Acklin, Ottawa ($8,030) — He and Nick Arbuckle got on the same page, combining for a season-best 159 yards on 7-10 targets. Acklin scored 27.4 fantasy points the last time he faced the Argos’ secondary in Week 8, so count on him to be in position to put up a high volume of production.

Nic Demski, Winnipeg ($8,419) — Oh, he’s been a boss the past two games, totalling 49.9 fantasy points. If he’s not torching defences with his catching, he’s staggering them with the occasional run. Demski knows a thing or two about shining in that return trip to IG Field; after all, he did have 134 receiving yards in last year’s win.

Reggie Begelton, Calgary ($8,237) — Last week’s two-touchdown performance might be the nudge Begelton needs to go on a monster run. He had a season-best 22.7 FP on Labour Day, and he’s long overdue for a 100-yard outing.

Malik Henry, Calgary ($7,762) — Quietly, Henry has become WR1, having caught 11 passes in Jake Maier’s first two starts. Two of his three best games this season have come at the expense of the Elks’ secondary. Keep that in mind when building your lineup.

Dillon Mitchell, Edmonton ($2,500) — Opportunity knocked for Mitchell, who scored his first CFL major while catching six of his eight targets on Labour Day. There’s some risk here, yet Mitchell looks like he’s up to the task of being Taylor Cornelius’ top downfield option.

Dalton Schoen, Winnipeg ($6,651) — He’s fallen off a bit, having just six catches in the past three games, but two have gone for touchdowns. With the Roughriders looking to slow down Nic Demski, this is a week where Schoen has a very solid rebound.

Kyran Moore, Saskatchewan ($7,332) — Topped all Riders receivers in receptions and yardage in Week 13. Not bad for a guy who missed nearly a year with a knee injury. The rust is shaking off fast.

Kurleigh Gittens Jr., Toronto ($6,745) — The Argos’ “Caring is Sharing” style passing game means everyone gets their equal share, but when things get tight, it’s Gittens who gets the larger piece of the pie.

Tyson Philpot, Montreal ($2,980) — A perfect 4-for-4 for 71 yards in Week 13. If the Alouettes have plans to overtake the Argos in the East, they’ll need someone to pair up with Eugene Lewis in the passing game, so why not the explosive National rookie?

Lucky Whitehead, BC ($10,032) — Injured yet still participated in practice, but until we know who’s starting at pivot, someone has to be the odd Lions receiver out of the top 12.

BC ($4,389) — The Lions have yielded just 18 offensive majors and top the league in fewest yards allowed per game by a considerable margin. They’re also second only to Saskatchewan in QB sacks.

Winnipeg ($3,200) — They’re not forcing turnovers at their usual clip, but the Bombers are at or near the top of most defensive categories.

Toronto ($3,862) — The ballhawking unit leads the league with 16 interceptions and have forced a total of 27 turnovers.