The popular CFL on TSN panel is back for the 2017 season with host Rod Smith alongside fan-favourite analysts Dunigan, Chris Schultz, Milt Stegall, and Jock Climie.

WHERE TO WATCH IN THE USA

Based on a multi-year agreement with the CFL, ESPN television networks and ESPN3 have the exclusive rights to present all regular season and postseason CFL games in the United States, including both the Eastern and Western Semi-Finals, as well as the 105th Grey Cup presented by Shaw. Production and commentator teams for ESPN telecasts are from TSN, Canada’s Sports Leader.

* All ESPN networks are available to stream live on the ESPN app. Schedule subject to change.

ESPN3 is ESPN’s live multi-screen sports network, a destination that delivers thousands of exclusive sports events annually. It is accessible on computers, smartphones, tablets and connected devices through the ESPN App. The network is currently available nationwide at no additional cost to fans who receive their high-speed Internet connection or video subscription from an affiliated service provider. It is also available at no cost to U.S. college students and U.S.-based military personnel via computers, smartphones and tablets connected to on-campus educational and on-base military broadband and Wi-Fi networks.

WHERE TO WATCH IN THE UK AND IRELAND

Sports fans in the United Kingdom and Ireland will have the opportunity to watch CFL action live on television for the third consecutive season.

Every regular and post-season game, including the 105th Grey Cup presented by Shaw in Ottawa, will be available live to SiriusXM satellite and online subscribers on Canada Talks (channel 167). French-language broadcasts of Montréal Alouettes and Ottawa REDBLACKS games can be heard on Influence Franco (XM 174).

In partnership with Yare Media, the Canadian Football League (CFL) announced on Friday that an international livestream of the entire 2017 regular season will be made available. Fans in more than 130 territories outside of the TSN, RDS, ESPN and BT Sport footprint will be able to access this streaming service to follow regular season contests, playoff action, and the 105th Grey Cup presented by Shaw. 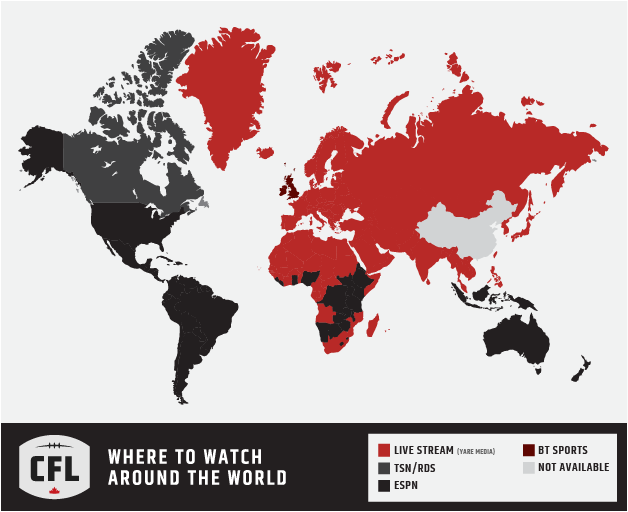